If you have read any of our reviews, you know that we love comfort food.  One of my favorite types of comfort food is Greek cuisine.  My husband grew up in Tarpon Springs, Florida…basically the “Little Greece” of the U.S.  In fact, in the 2010 census, Tarpon Springs was shown to have a higher percentage of Greek Americans than any other U.S. city.  Needless to say, we had our fair share of souvlaki, gyros, and hummus in Tarpon Springs and we are always on the lookout for good, authentic Greek comfort food.  Recently, we decided to give Taverna Yamas a try.  Taverna Yamas is in the Tinseltown area, situated on Deer Lake Court across the street from Mellow Mushroom.  It’s a huge place with ample parking.  On the far right end of the building is a hookah lounge called Yamas Hookah.  We haven’t checked out the hookah lounge yet, but it always seems to be lively and busy, so we decided to try out the restaurant to see if their Greek cuisine hit the spot.  Since our first visit to Taverna Yamas back in December, we’ve been back two more times and each time we’ve left scratching our heads in confusion.  We kept wanting to really like it and make it one of our regular go-to spots, but each time something just felt a little “off.” 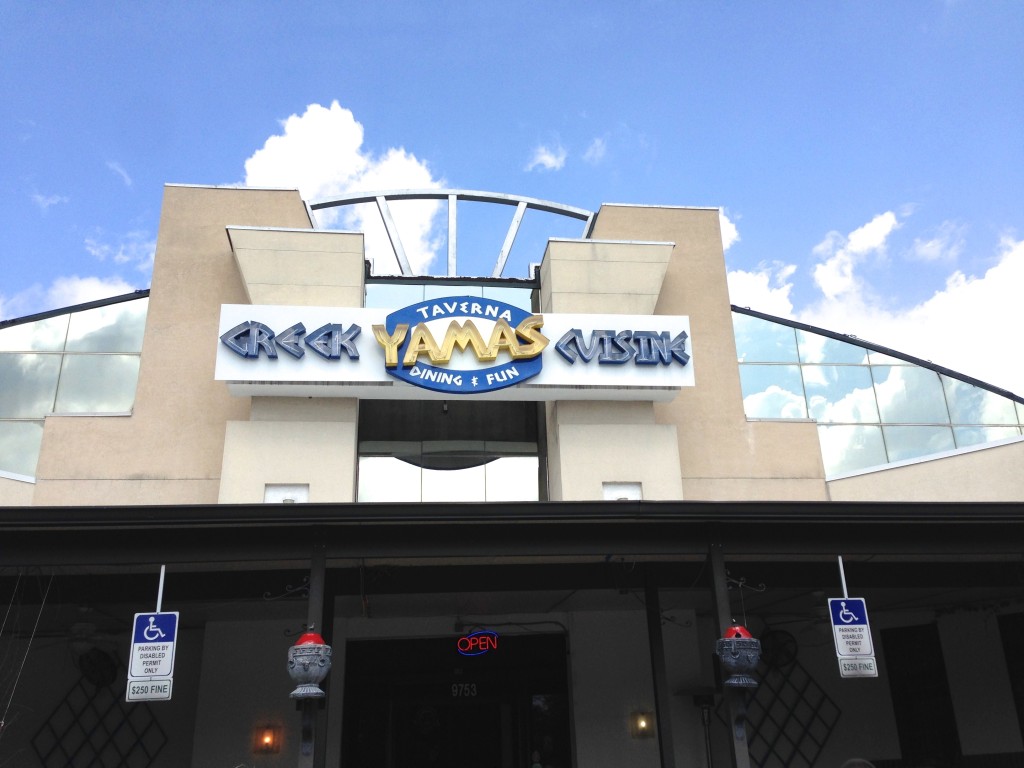 Let me start by saying that the food itself is decent, authentic Greek cuisine.  We’ve tried several classic Greek dishes at Taverna Yamas and each one was pretty good.  Nothing to really “wow” us, but good and with fairly large portions.  One of our favorites from Taverna Yamas has been the Souvlaki Gyro Platter, which comes with a huge Greek salad and a side of tasty lemon potatoes.  Gyros are pretty standard Greek fare and these are no different…tasty, but pretty standard. 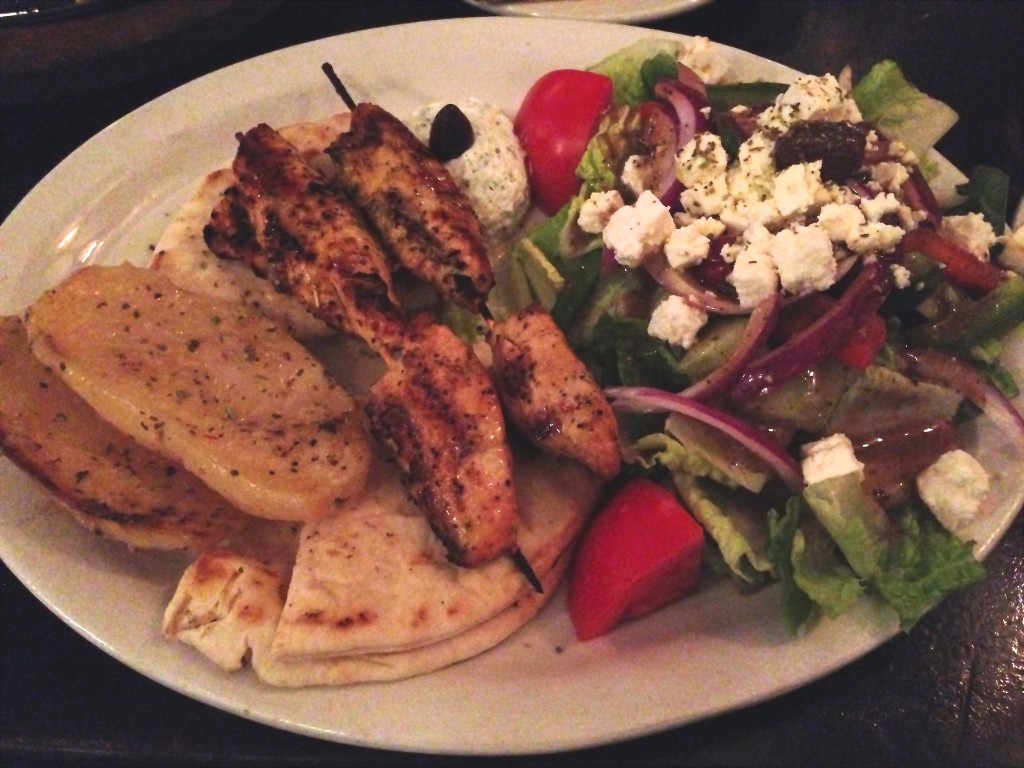 The Pastitsio (basically Greek lasagna) was another solid dish that we had at Taverna Yamas.  It was hearty and filling.  But really, how can you go wrong with pasta, meat, tomatoey sauce, and loads of melty cheese?  The Pastitsio was a pretty good dish.  The Seafood Salad was another winner.  It was a heaping plate of salad, roasted veggies, and seafood and had some of the most tender octopus we’ve eaten.  The hummus is also good and even the kids agreed on this one.  It also helps that they serve it with tons of warm, soft pitas for dipping.  So, yeah…clearly the food at Taverna Yamas is pretty good.  And they give you a lot of it. 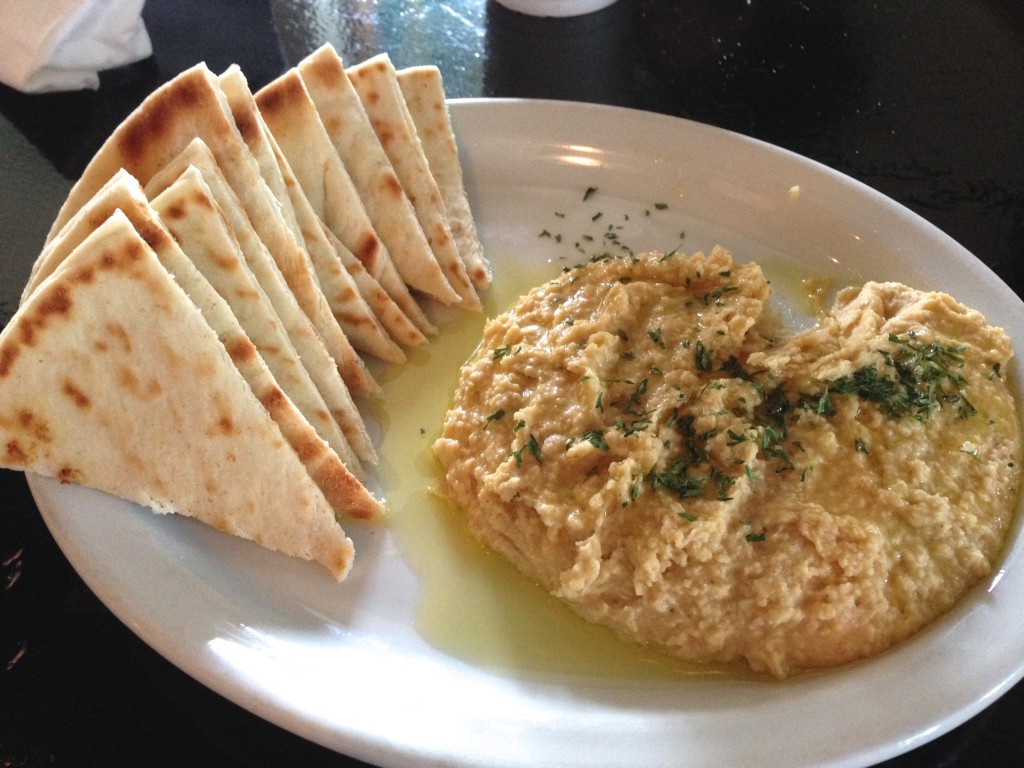 The confusing part on all of our visits was the service and the overall ambiance.  Inside, the restaurant is enormous, with really high ceilings and a long bar taking up the entire back wall of the space.  But somehow despite the vast open space, the place is dark, drab, and dimly lit.  Add to that the mismatched chairs, kitschy decor, and slightly sticky tables and the interior just feels shabby and dated. 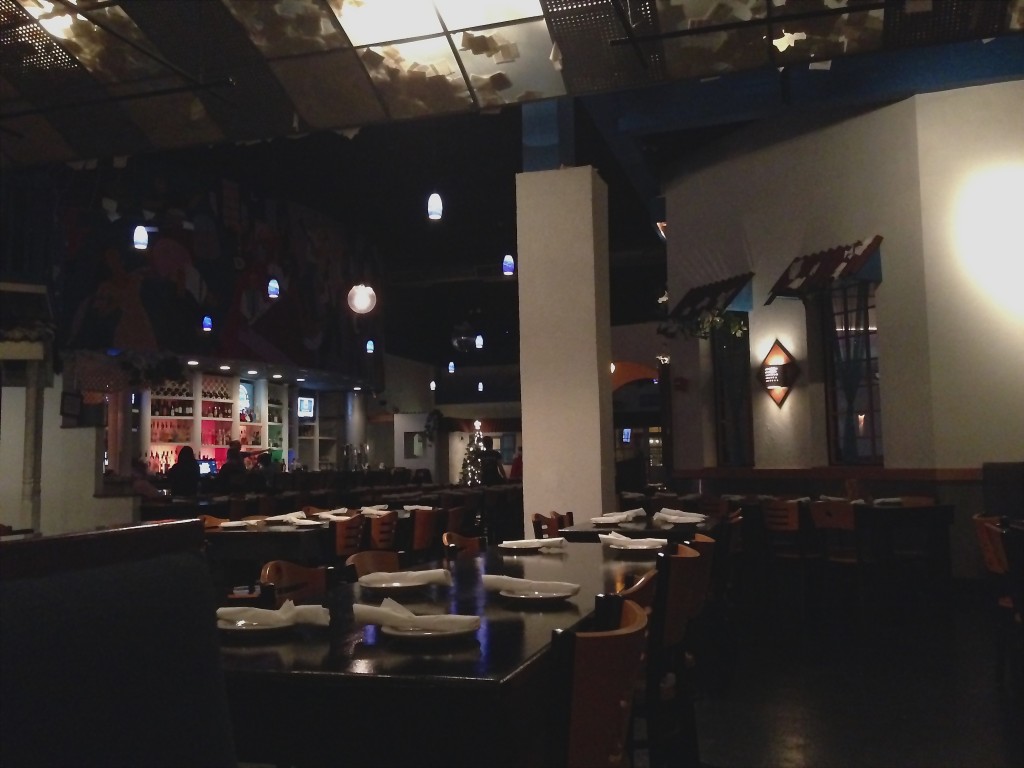 The service also left a lot to be desired.  On each of our visits, the waitstaff seemed way too nonchalant and not very attentive at all.  I’m definitely not one who needs to be doted on and fawned over when I go out to eat, but I do appreciate a little enthusiasm when being greeted.  And a well-informed server is always a must.  Taverna Yamas missed the mark on both of these.  Instead, we were greeted with a blasé attitude and were met with looks of confusion while ordering.  There were even items on the menu that just shouldn’t have been there.  Not that we ordered them and they were out of that particular item that night.  We ordered and the server looked perplexed.  After she looked over the menu herself, we were told that they hadn’t offered that dish in a while and that it “should have been taken off the menu.”  Probably the best illustration of this lackluster service was with our Saganaki.  If you’ve never had Saganaki before, I’ll go ahead and ruin the surprise for you…it’s cheese that they light on fire tableside.  What you end up with is a sizzling skillet of delicious melty cheese with a perfect slightly crispy outer crust.  Saganaki is amazing and by far one of my favorite Greek dishes…especially when served with the customary “Opa!!” and lots of Greek flair.  But this was definitely not what we got at Taverna Yamas.  Don’t get me wrong, the cheese was delicious (I mean, how can a giant wedge of melted cheese not be delicious).  But the flair was absent and the “Opa” was weak and unenthusiastic to say the least.  I know I’m probably a little picky when it comes to Saganaki.  After all, I did have my fair share of it (served the correct way) during my time in Tarpon Springs.  But come on…if you’re a restaurant serving Saganaki, you’ve gotta do it right.  Put a little effort into the presentation. 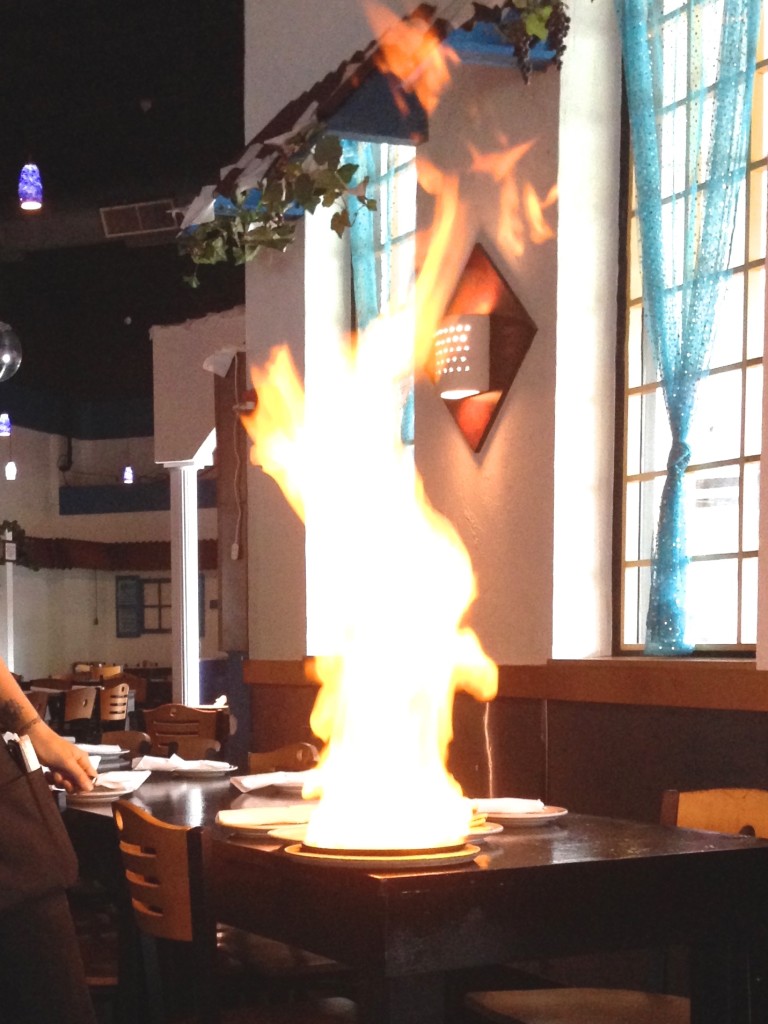 The part about Taverna Yamas that really left us scratching our heads was just how empty it was when we were there.  Our first visit was on a weeknight around 7pm and there were maybe three other small parties there.  Our second visit was on a Friday night at 8pm and there were only two other tables taken.  Our most recent visit was on a Saturday afternoon at lunchtime.  We were literally the only people in the place.  It’s so bizarre to be the only people dining in such a massive space.  This is especially true given the fact that the tables in Taverna Yamas are primarily set up to accommodate family-style dining.  The better part of the dining space is filled up with long tables to seat large parties of 10-16 people.  So it was more than a little odd to see the place so empty during times when it probably should have been busier.  But if the service we experienced is typical, it’s not hard to see why.  We went back several times before writing this review because we were really hoping it was just a fluke and that our experience would be better the next time.  The food was good and we wanted to give it another try.  But on each visit, the service was a little worse until finally after our last meal there, we actually said to each other “Why do we keep coming back here?  Let’s go someplace else next time.” 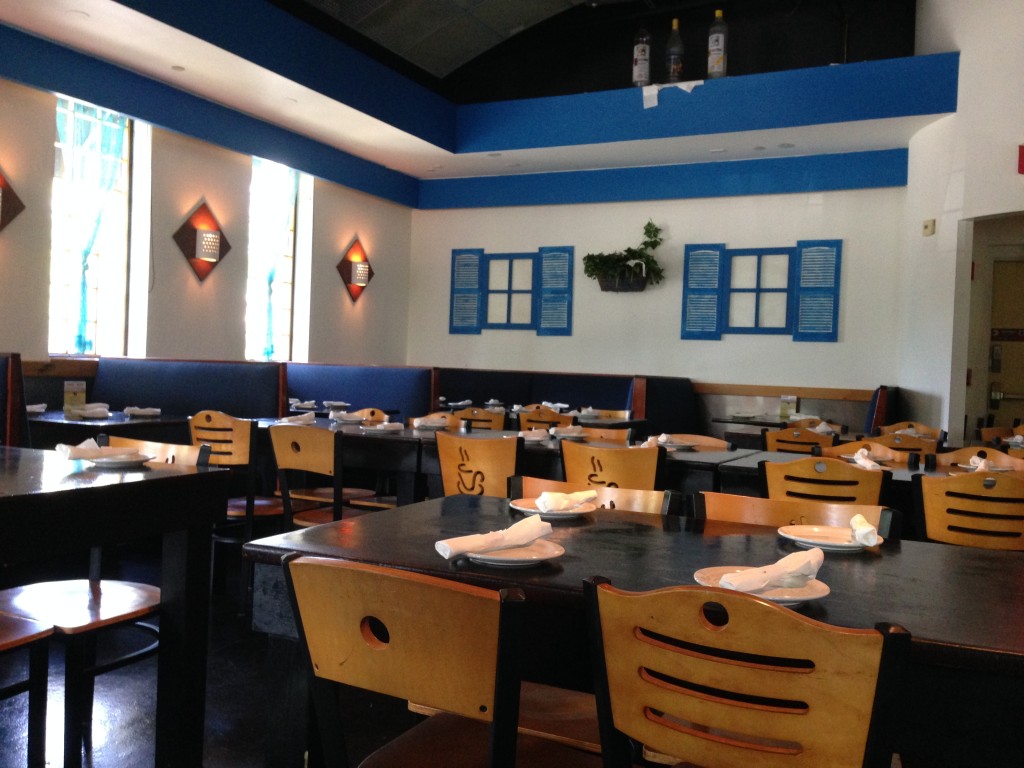 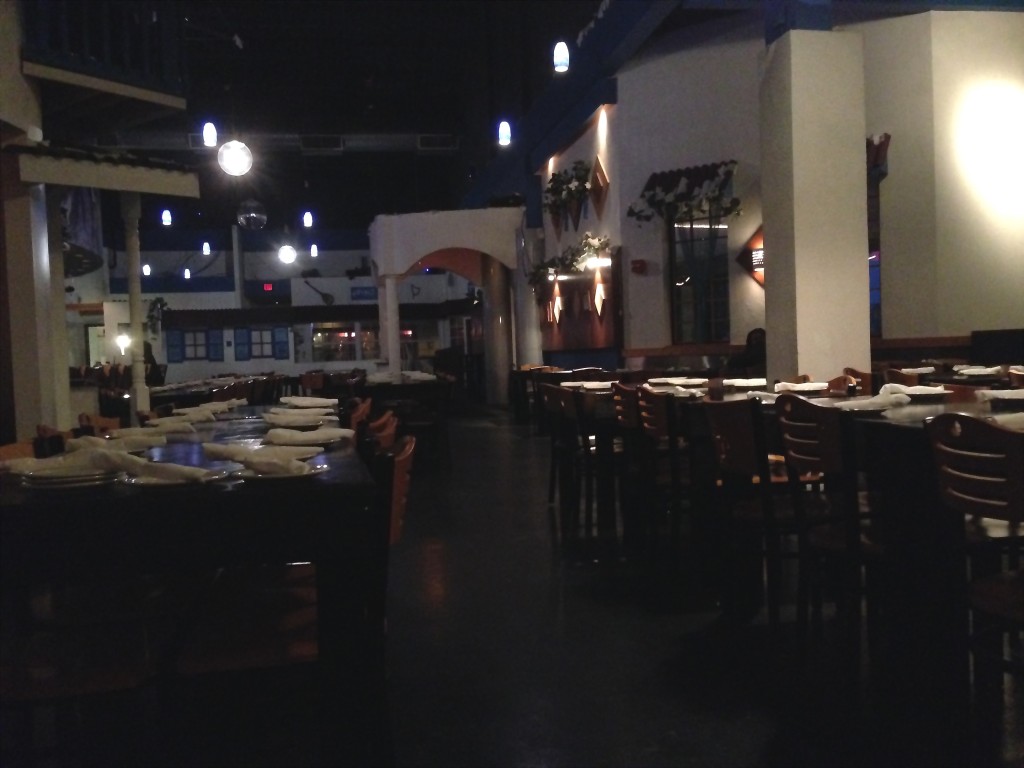 Now, I will say that the hookah lounge always seems to be busy.  That end of the parking lot is consistently packed.  Based on the music, the lively crowd, and the steady stream of people into that side of the building, Yamas Hookah seems to be doing just fine.  Taverna Yamas also has a second location in Orlando and I’ve heard that that location is always busy, with a line out the door waiting for a table and a fun, enthusiastic atmosphere.  So maybe between those other two ventures, the Jacksonville Taverna Yamas doesn’t have to be busy all the time.  Or maybe we just caught them on an “off” day…on three separate occasions.  Either way, Taverna Yamas didn’t live up to my expectations service-wise.  If you’re looking for decent Greek food and big portions, go ahead and give it a try.  Just don’t expect to be “wowed” and be prepared to have to flag down your server when you need a refill or the check. 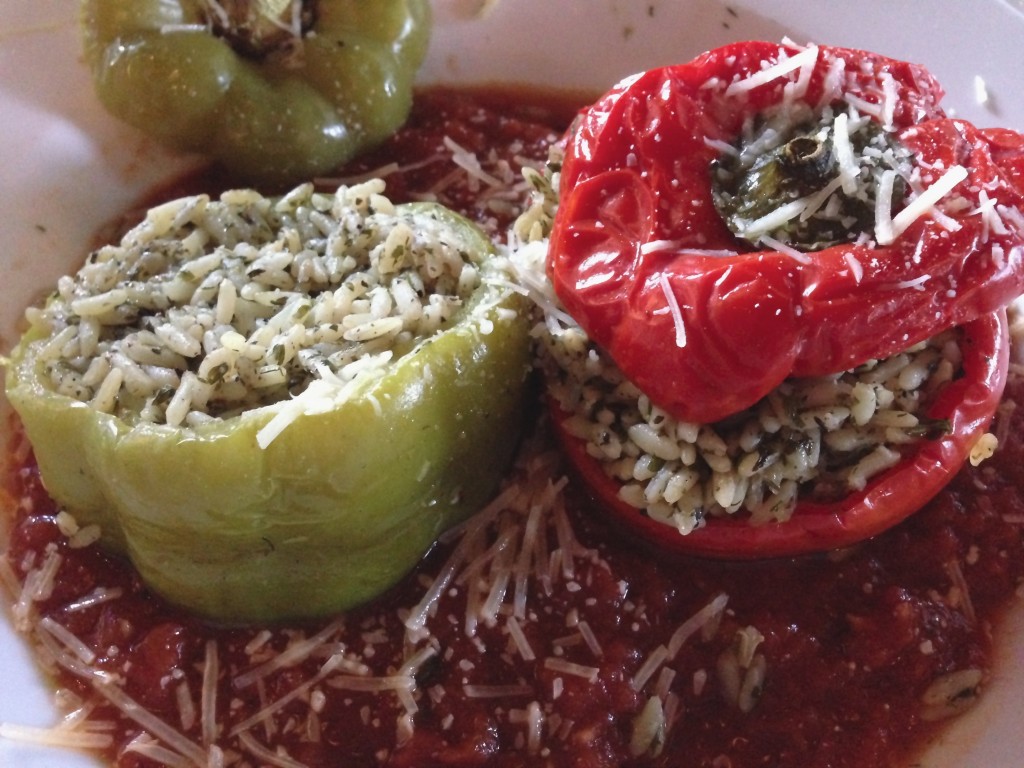