We recently got an invite to head over and try out Jacksonville’s newest food truck, Professor Panini.  Tony Weisman, aka Professor Panini, went to college in Orlando at UCF.  While he was down there he worked for a restaurant which had a food truck and that’s where he got his first taste of the truckie life.  Fast forward a few years and Tony headed up to Jax and went to work for one of Jacksonville’s most popular food trucks, The Happy Grilled Cheese.  After working for The Happy Grilled Cheese for quite a while, Tony decided to venture out on his own.  That was the start of Professor Panini. 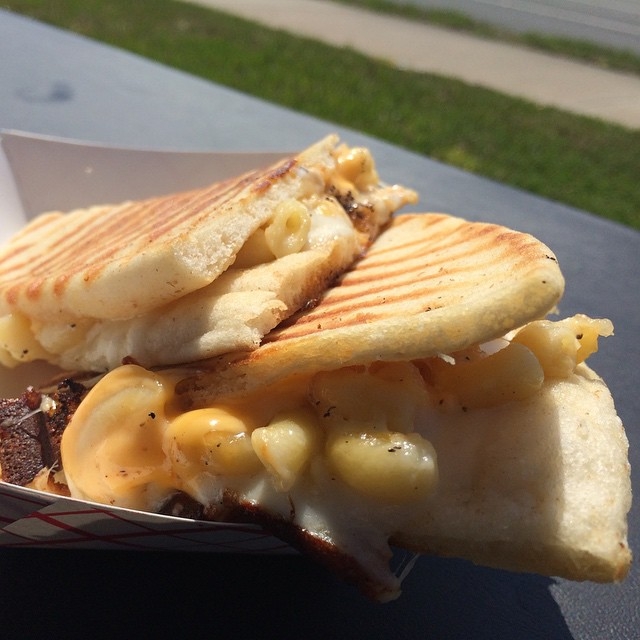 We tried two paninis…the Buffalo Chicken Panini and the Mac n Cheese Melt Panini. The first we tried was the Mac n Cheese Melt Panini. We thought this one was pretty good. How could pasta and cheese melted on a panini be bad? The other panini we tried was the Buffalo Chicken Panini.  The chicken was cooked reasonably well, the cheese was good, and we enjoyed the buffalo sauce which added a nice little kick as well.  The one side we tried was the Mac n cheese. As a die hard Mac n cheese lover I had try it as a stand alone side.  Unfortunately it wasn’t good.  It was all Mac and no cheese. If they added a bunch of cheese it could be decent.

After visiting Professor Panini we left thinking, “Well that was pretty decent”.  It’s nothing we’d go out of our way to get, but if it’s around we’d probably eat it.  After having some time to think about where Professor Panini fits into the food truck community, we decided to compare the menu of Professor Panini with that of the Happy Grilled Cheese side by side.  Upon comparison it’s easy to see that it’s a virtual copycat.  Given that Tony just left the Happy Grilled Cheese truck to open this one, it sure looks to us like he learned the business and then knocked off his boss’ truck.  He didn’t learn the business and then create a pizza truck or a taco truck.  He opened what amounts to a grilled cheese truck with different bread and a virtually identical menu.

Anthony Hashem, owner of The Happy Grilled Cheese has been at the epicenter of the food truck boom for the last few years.  He’s gone out of his way to grow the food truck community in Jax and has leant his significant knowledge of how to be successful as a truckie to countless folks, typically asking little if anything in return.  He’s one of the most truly genuine folks we’ve met since we started this adventure.  I’ve never once met someone with a negative thing to say about the guy.  You can say this scenario is just business I guess.  But if it’s just business, then we’ll choose to take our business elsewhere.