Today we were invited out to try the newly opened Oceana Diner on Beach Boulevard. It is located in the plaza across from Target where Over the Ditch Café used to be. Oceana has only been open a few weeks and is still in soft opening phase currently. The grand opening will be held April 6th-10th. The story of the two owners, Marvin and Yalcin, is worth knowing. Marvin and Yalcin have decades of restaurant experience in their family and were living in Maryland and New Jersey. They decided they wanted to open a diner and began looking online for restaurant spaces in their area. A Google paid ad came up for a 50 person restaurant space and the pictures looked perfect for their vision. They called the owner of the space and it turned out to be located in Jacksonville. On a whim, they made the 24 hour round trip and fell in love with Jacksonville because it reminded Yalcin so much of Turkey, where they are both from. They packed up their families and moved down and opened Oceana Diner after several months of hard work in getting the space ready, which actually is not the original space they came down to see. I think their story is truly exemplary of what hard work can do and it was refreshing to talk to them and hear their passion about their restaurant and their food. 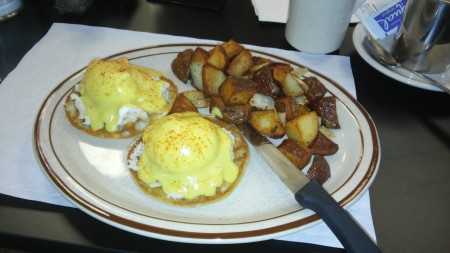 When you walk in, the restaurant itself is very clean and tremendously organized. You can tell that the owners don’t want this to turn into a cluttered and quirky diner. The booths on the walls they even built themselves to match the tables throughout the rest of the restaurant. My friend and I were seated and brought menus immediately and we had the opportunity to visit with the owners before ordering. Their customer service is outstanding. Sometimes when we are invited to review restaurants the service is over the top for the sake of the review, but I watched the owners extend the same service to every person that entered the restaurant. They are friendly, informative, and overall they convey that this is a family atmosphere where everyone is part of their family. Our tea and coffee was kept refilled and hot throughout the entire meal, and Yalcin and Marvin took turns checking on us. 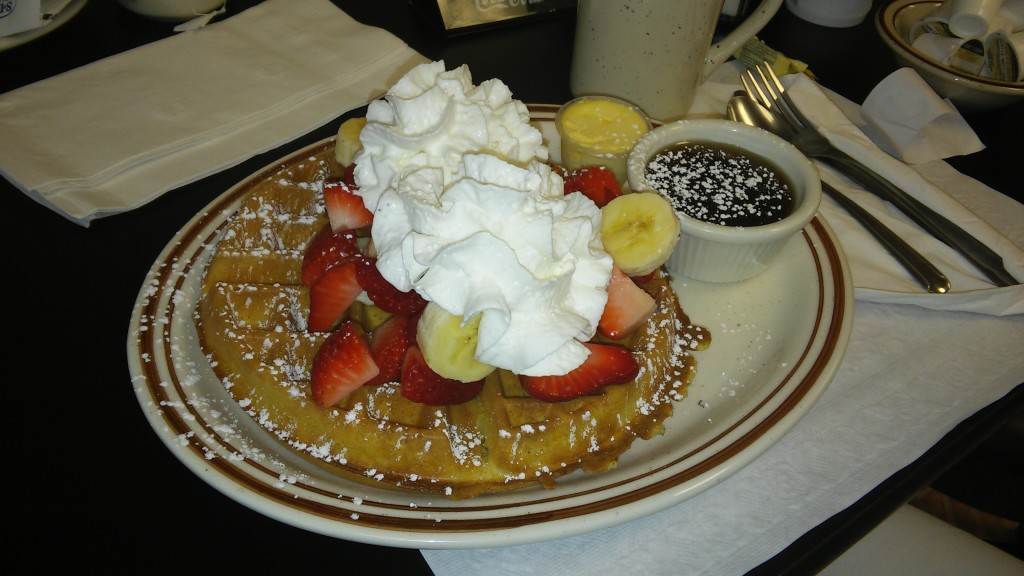 Moving on to the food, I had to try their Crab Benedict because I feel like that is an easy way to judge the quality of breakfasts. Hollandaise and poached eggs can be tricky and good preparation speaks volumes to me. That meal came with a choice of grits or home fries with onions. I chose the home fries. My friend went with their Fiesta Waffle. The food took a little while to prepare, which is expected during a soft opening. It wasn’t an overly long wait factoring in that aspect and didn’t bother me. When the food arrived my friend and I were both so taken with how pretty the waffle was that it took us a second to start eating. The Fiesta Waffle is stacked with fresh cut strawberries and bananas and layered in fresh made whipped cream. No canned or frozen anything here, which I appreciate. The waffle, as my friend described it, is one of the top five waffles she’s ever eaten. It is lightly crisp on the outside but basically made of air on the inside. It reminded me of how light a funnel cake is. It wasn’t sweet and combined with the strawberries and whipped cream it was truly heavenly. My friend barely even used her syrup and didn’t need the butter at all. A great waffle shouldn’t require those accoutrements and this was an outstanding waffle. The Crab Benedict was also very tasty. I was impressed on several levels with the preparation on this dish. The first was that they actually provided me with a lot of hollandaise. It frustrates me when you order eggs benedict and there’s only a teaspoon of hollandaise. This was covered in it and it was excellent. It was lightly lemony and fresh and the exact texture that well prepared hollandaise should be. The second thing I was impressed with was that my egg was perfectly poached. Nothing ruins eggs benedict like a hardboiled or raw egg. The white was cooked to perfection and the yolk was perfectly runny. Marvin knows what he’s doing with eggs benedict. The lump crab was so fresh and was packed on to the toasted English muffin. They don’t skimp on portion sizes here. Marvin recommended next time to try their signature Oceana Benedict which I will definitely be doing in the future. The side dish of home fries was okay but didn’t stand out. In my opinion, I felt like the potatoes were slightly under seasoned and could use some spice to them, especially combined with the thick cut onions. I was really too busy being enamored with the rest of the food to even eat them. That truly is the only critique I could even give on the whole experience. 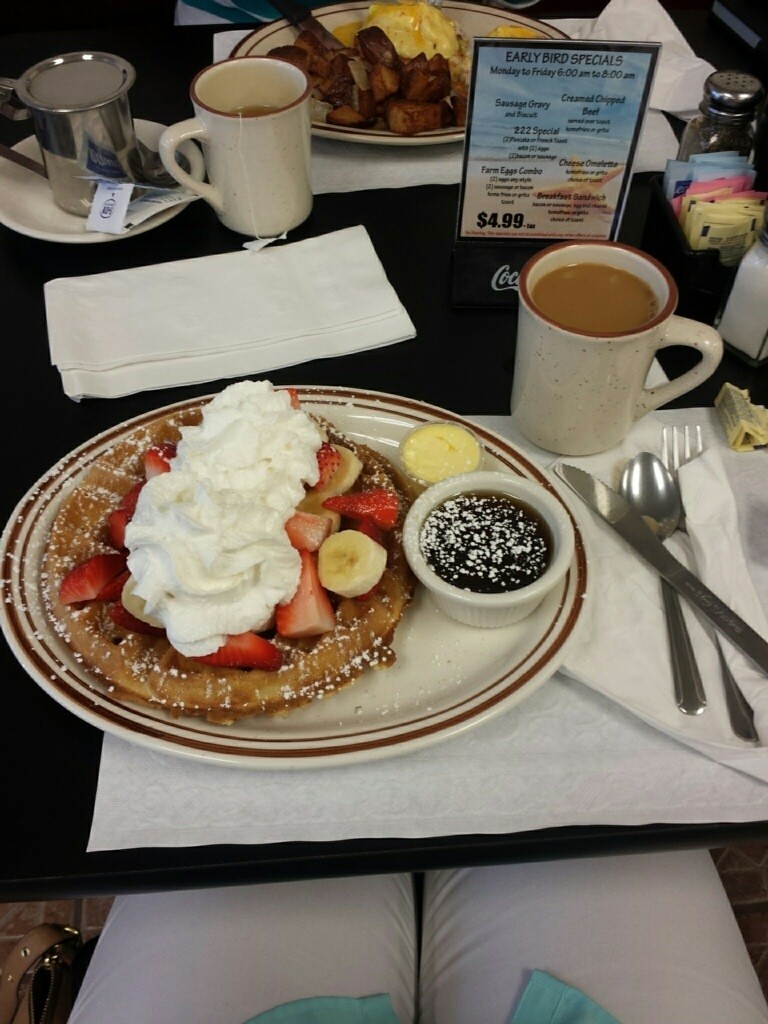 Glancing at the rest of the menu there’s so much more that I would like to try in the future. They have an extensive breakfast and lunch menu and are open 6am-3pm every day. From omelets to French toast to breakfast sandwiches there is something for everyone on their menu. They’ll also be running daily specials and have an early bird $4.99 menu from 6 am-8 am. I foresee Oceana becoming a staple of the East Arlington area as soon as people discover it. Marvin and Yalcin have a formula built for diner success. 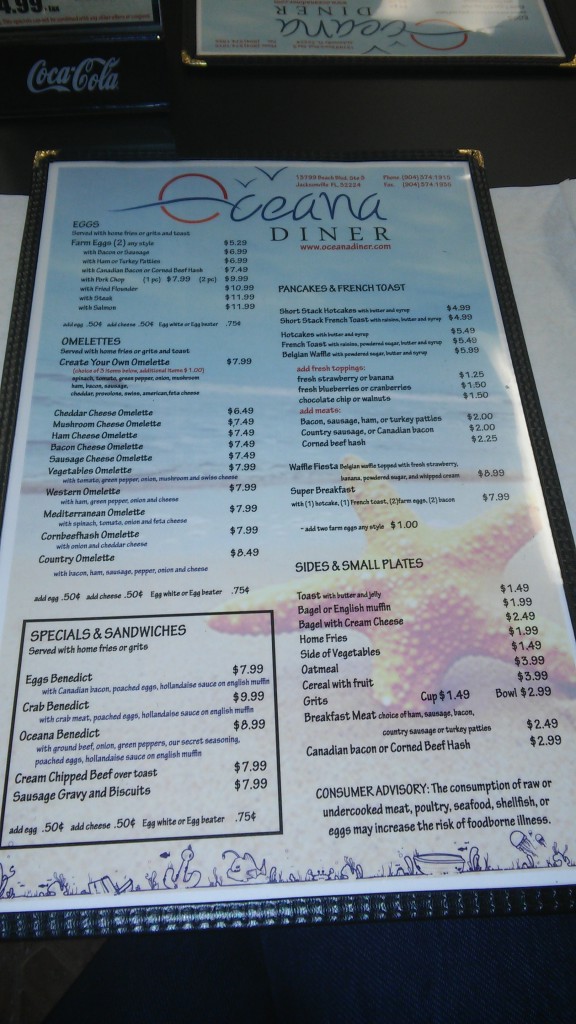 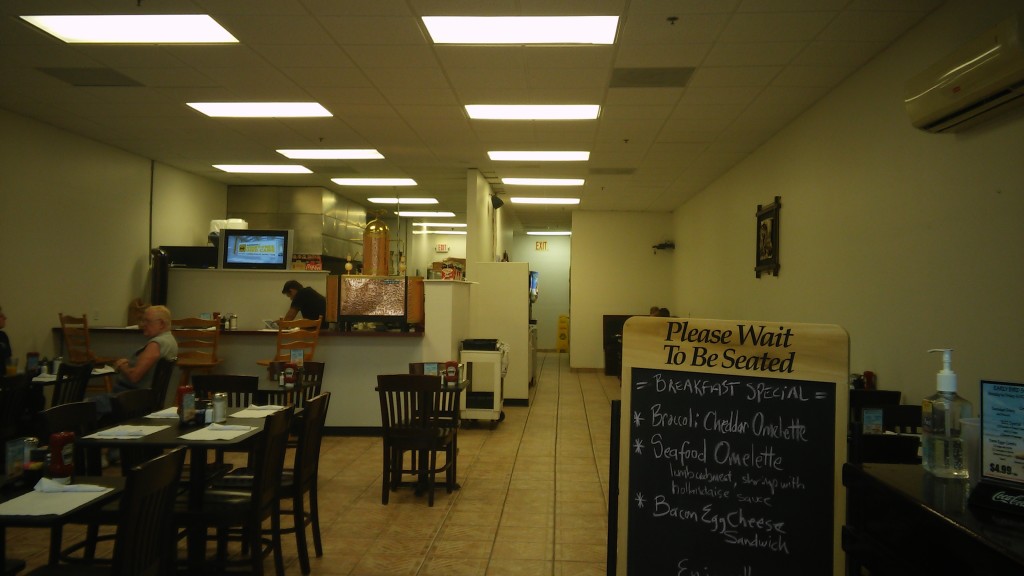 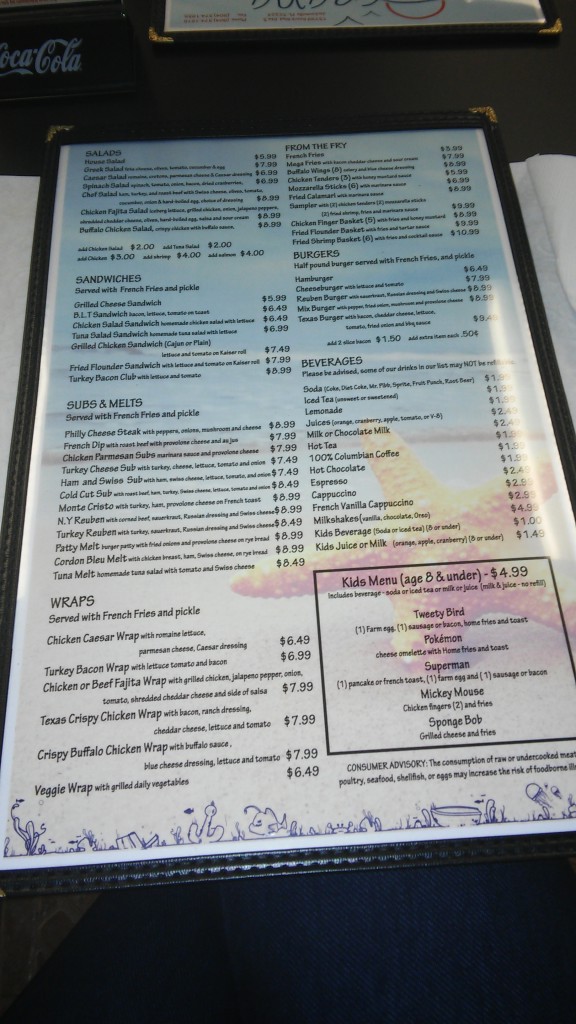