Overview of Restaurant and concept: Situated in a unique looking standalone building off the service road on Southside blvd. Asian fusion meets southern comfort in this restaurant creation by Chef Dennis Chan. I’ll confess upfront that this wasn’t my first visit to Blue Bamboo.  It might have been my 10th or so. I’ll also confess that Blue Bamboo is one of my favorite restaurants in Jacksonville.  Blue Bamboo bills itself as a hip Asian bistro. The food definitely fits that description. The atmosphere well…..if a different crowd showed up the space could definitely accommodate that. When I’ve been there it’s actually been fairly quiet with a middle aged crowd. Usually the restaurant is about half to 3/4ths full. Chef Chan has worked hard to marry his Asian culture with his love for southern comfort foods.  If I thought what would a chubby Asian chef who grew up in the south and loves southern and Asian food about equally this might be what I’d expect for a menu. They offer anything from Peachy chicken and waffles to Kung pao tofu stir fry.  I can honestly say I’ve never had a dish I didn’t like here.  That’s a miracle given how picky I am! 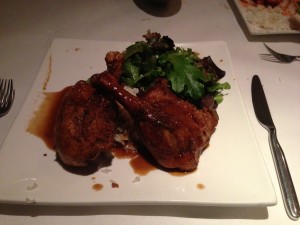 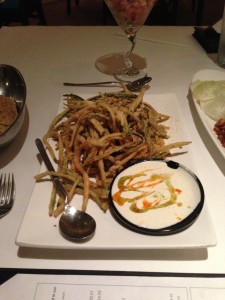 The food: After we were seated and had our drinks the waitress brought out homemade flax seed crackers with an edamame spread. The spread was tasty. The flax seed crackers were okay. This was a nice change of pace from the typical bread and butter that most restaurants serve.  More restaurants should think outside of the bread and butter box.  The first thing we tried was Hoisin chicken and lettuce wraps. ($9.95)  The chicken was covered deliciously in hoisin sauce.  This was a good start to the meal.  The sauce was not too heavy. They have good flavor, and are some of the better lettuce wraps I’ve had.  The signature appetizer at Blue Bamboo is the Fried dragon whiskers- Zucchini Straws with Garlic Chive Ranch Dipping Sauce. ($10.50) You could say this is Blue Bamboo’s version of the Outback bloomin’ onion but you wouldn’t be doing it justice. The fried dragon whiskers are slices of zucchini piled high on a plate complemented by some of the most delicious ranch dressing a chef could think up. They’re lighter than a bloomin’ onion and have a fuller flavor. One of the better appetizers we’ve found in Jax. The first entree we tried was the half Canton roast duck with Jasmine Rice and Mixed Greens. ($26.95) The duck was cooked perfectly.  The skin was crispy with a nice crunch. It was seasoned well with greatly flavor and a slightly sweet orange sauce that really complemented the flavor of the duck and gave it a bit of Asian flair.  The Jasmine rice was good and the mixed greens had a tasty ginger dressing.  The duck was a solid entrée I would order again.  The 2nd entrée we tried was the Panko Sweet & Sour Chicken- panko crusted chicken breast sliced up and served with jasmine Rice, peppers, onion, and pineapple. ($17.50)   This was decent although VERY sweet.  It’s almost impossible for something to be too sweet for me so it was decent for me. My dining companion on the other hand found it way too sweet for his liking and while he said it was okay he wouldn’t order it again. If you like things really sweet this might be a dish you really like.  If you’re not so into the sweet stuff shoot for something else. The vegetables accompanying the sweet and sour chicken were good and came without a sauce on them so you could eat them plain or mix them into the sweet and sour sauce.  For desert we tried the ice cream plate.  Normally they allow you to choose 5 ice creams or sorbets. However, they were out of 2 of the ice creams I tried to order so they allowed me to try 3 and adjusted the price accordingly.  They have around 10 or so to pick from including basics like vanilla and extremes like red bean, taro or green tea. The 3 ice creams I tried were mango, lychee, and green tea. They were all pretty great with lychee being my favorite.  One flavor I missed out on this time(since they were out) which I previously have had at Blue Bamboo is Taro.  You may have tried Taro at one of the yogurt shops in town.  Taro at Blue Bamboo has sort of a similar flavor but it’s sweeter and it has a unique texture sort of half way between the normal texture of ice cream and cake.  It’s different and you’ll probably either love it or hate it but you should surely try it. 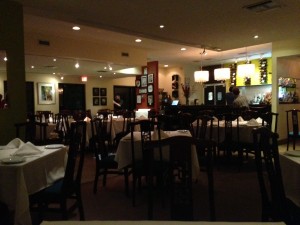 Service: I don’t have a ton to say about the service and that’s almost always a good thing.  The best servers you hardly notice. We had no issues. Our server was attentive without hovering. Our food arrived in a timely fashion. Our server was knowledgeable about the menu and did a good job explaining when we had questions. Good service for sure. Also, I’d be remiss if I didn’t mention the presentation of the Blue Bamboo desert menu.  Most restaurants have paper menus and some have desert trays to view.  Blue Bamboo’s deserts are too numerous for a tray so they decided to present them on a video picture frame.  The waitress bring you a video picture frame and then swipes through each desert and after dinner drink item explaining each one while you look at the photo then hands you the menu and gives you time to decide.  It’s a really nice touch. 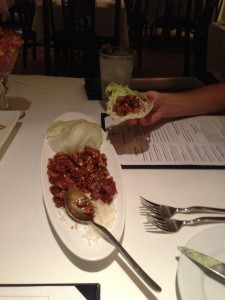