Blue Bamboo has proven itself to be one of the top foodie destination restaurants in Jacksonville with it’s diverse menu and specialty offerings.  Voted as one of the top restaurants in the southeastern United States, it blends Asian comfort food with southern comfort food to create a unique and ever-changing dining experience.  Owner and Chef Dennis Chan opened the restaurant in 2005 and has continued to innovate and reinvent his menu to provide fresh dining experiences for everyone.  Prior to our recent Blue Bamboo Food Adventure, Chef Dennis sat down with us to discuss his history and what makes the restaurant so special.

Chef Dennis comes from a long line of restauranteurs.  His family had been in the restaurant business for seven decades prior to him opening Blue Bamboo.  His grandfather, his parents, uncles, aunts, and cousins have all had successful restaurants throughout the Jacksonville area.  In his lifetime, his family has owned 12 restaurants in Jacksonville.  Dennis began working the cash register at his family’s restaurants, which all included traditional Chinese fare.  Dennis decided that he wanted to continue the family legacy, so in order to learn more about the kitchen aspect he applied “sight unseen” to the Culinary Institute of America based on its reputation.  With years of experience running a dining room, Dennis immersed himself in learning the classical French technique taught there.  Early on in his schooling, he spoke with Marcella Hazan, who is a world renowned Italian cooking author and teacher.  Marcella gave Dennis insight into the main difference between French technique and Italian/Asian techniques in cooking.  Dennis said that she guided him by teaching him, “There is not much of a difference between Asian cooking and Italian cooking.  But French, on the other hand, is way out there.  The main technique that differentiates the styles is that in French cooking the sauce is created separately from the main item.  In Italian, Chinese, and Asian recipes, the sauce is cooked with the dish.  With that in mind it opens up a whole bunch of different cooking techniques.  We can play with flavors so much more.  And yes, the sauce tastes drastically different when you make it separately.  When you build a sauce with the protein in it you have an extra layer of flavor.” 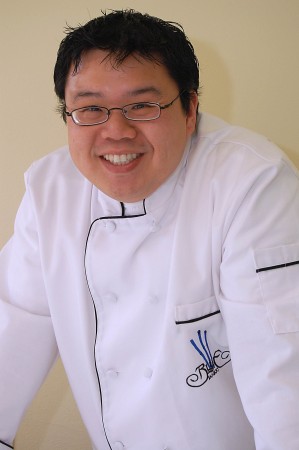 After mastering both styles of cooking, Dennis was ready to complete his schooling with an internship.  This part of the story is one of our favorite parts of Dennis’ experience because it is just one of those stories that doesn’t often happen in real life.  One of Dennis’ mentors is Ming Tsai, who had shows on the Food Network and now has a PBS show called Simply Ming.  Dennis told us, “When I was in culinary school I’d go back to my dorm and turn on the Food Network.  There was a show named East Meets West.  Ming would teach a technique and then show how to add Asian ingredients to it.  It was stuff that I grew up with combined with things I learned in class that day and then put together into a new dish.  He (Ming) went to Cordon Bleu in France.  So when it came time for an internship, the first person that I called was Ming.  Here I was trying to get ahead and plan three months in advance and he actually hired me immediately to work for him.  We’ve kept close since then.  One of the dishes on my menu is a crab rangoon.  I was surprised, but he told me to trust him and put it on the menu and it has become one of the biggest selling items.”  It is  amazing that one phone call and a simple emailed resume ended with Dennis being able to study under a well known chef and gain invaluable experience. 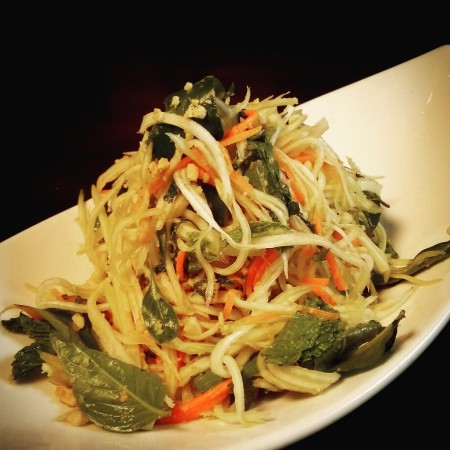 Blue Bamboo is now into its eleventh year and Dennis is still loving every minute.  The restaurant world can be tumultuous and unforgiving at times, and Dennis told us that his key to success is that “You really have to keep reinventing yourself.  Luckily I’ve been able to do that, partially because of my own boredom and partially because of guest requests and that we are able to accommodate new items for them.  We try to bring cutting edge items into our menu and sometimes we run them as specials.  For example, we are playing around with croissant donuts right now as a special.  We offer that as added value and as a special offering for desserts.”

One of our favorite questions to ask chefs is what menu item best speaks to them or was influenced by their life.  This emanates from a series on Netflix called Chef’s Table, which if any of our foodie readers haven’t seen it, it is a necessary watch.  Dennis was familiar with the show and immediately began to explain his signature dish, Red Curry Shrimp and Grits, as a prime example of bringing the chef’s life experiences into the menu.  Dennis explained, “Early on we ran a special and we had to evolve the special.  Geographically we are close to the coast and just north we have the Gullah area, home of shrimp and grits.  That dish has now evolved to become our Red Curry Shrimp and Grits.  This meal has panko crusted grit cakes served with a red curry shrimp stir fry that’s a little spicy.  That has become our signature, definitive dish.  Since I grew up in the Chinese restaurant business, ultimate comfort food for me is prepared the same way the Red Curry Shrimp and Grits is, but it has the contemporary flavor of different curries.  Classically, sweet and sour chicken was my favorite dish growing up.  I’d always get my mom to bring that home from the restaurant on the nights she didn’t want to cook.  And also I loved veggie stir fry.  The Red Curry Shrimp and Grits has both of those items, but especially the crispy grit cake like the crispy chicken.”  The Red Curry Shrimp and Grits is now the best selling item on Blue Bamboo’s menu, which is often the case when a chef puts heart and soul into creating a personal dish for the customers. 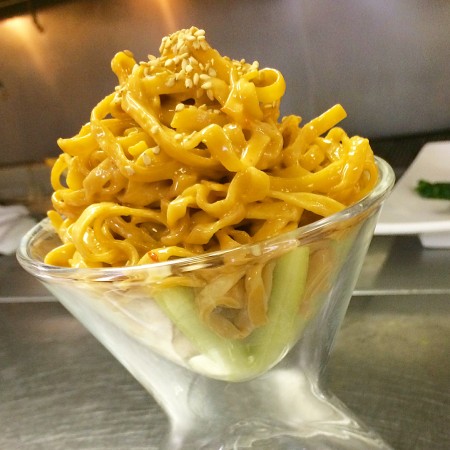 Another reason why Dennis’ customers love his menu are the unique dessert offerings at Blue Bamboo.  Some of the most beloved items that Dennis offers are his ice creams and sherbets.  Dennis said, “I’m a big ice cream fan.  Back when I was in culinary school we got to play with this machine called a Pacojet, which is a Swiss ice cream maker that can make you as much ice cream as you want.  It can even make just one scoop.  So I thought wouldn’t it be cool to open an ice cream shop with these machines and make ice cream all day?  We never got to that point to open that restaurant, but we did get to play with creating some of the unique flavors here.  We have a few suppliers for ice cream.  Locally, Working Cow out of St. Pete has amazing raspberry chocolate ice cream.  They’ve won me over with their ice cream flavors.  When I went to Hawaii a few years ago we went to a farm where the welcome center had different ice cream flavors to try.  They had all the classic flavors like taro, lychee, green tea, and red bean.  I tried the lychee sherbet and it was the most amazing thing I’ve ever had.  It took five years later to find a supplier that had lychee sherbet and mango sherbet and all these other flavors.  The distributer has it made in Japan, then they fly it to Atlanta, and then they distribute it to different places in the US.”  That’s quite a long journey to ensure that his customers have authentic flavors at Blue Bamboo, but Dennis would settle for nothing less.  Dennis’ grandmother actually used to grow taro, so in Hong Kong one time his aunt told him that he should try taro ice cream.  Dennis asked where to pick it up, and it’s actually such a ubiquitous flavor in Hong Kong that the 7 Eleven on the corner had it in the ice cream cooler.  Polling most people, we can probably guess that a vast majority don’t know what taro is.  In fact, Dennis told us that taro grows wildly in Florida all over the place.  Taro is the root of the elephant ear plant, and elephant ear grows in ditches throughout Florida.  Hiding at the base of the plant is the taro root which Dennis’ customers love.  Another can’t miss item at Blue Bamboo is the Mandarin Orange Cake, which is a sponge cake with mandarin oranges with a pineapple cream cheese frosting.  This has evolved into a signature dessert item and a personal favorite of Dennis’. 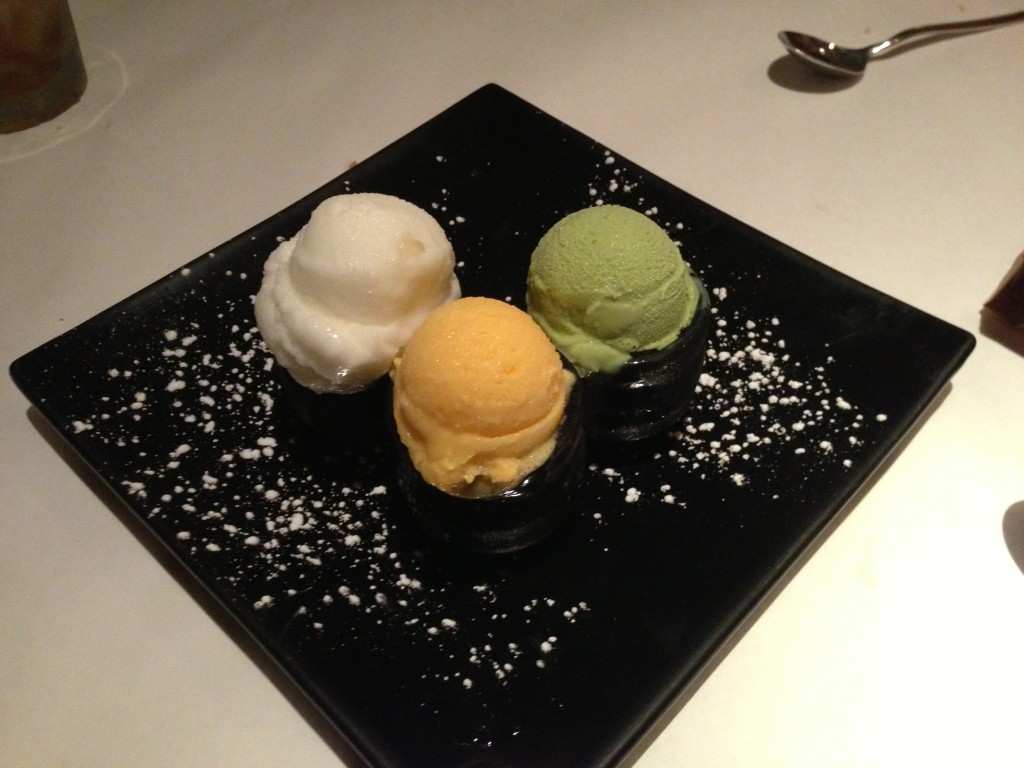 In addition to Blue Bamboo’s regular lunch and dinner services, Dennis also hosts cooking classes at the restaurant, holds special event dinners like the once monthly Dim Sum Sundays, has written a cookbook, and teaches at the culinary school at FSCJ.  Balancing all of these things would be a task for most people, but Dennis has an unrivalled passion and dedication to the growth and longevity of Blue Bamboo.  The cookbook publication occurred as a natural extension of the restaurant.  Dennis explained, “We wrote the cookbook with the goal of people being able to replicate our recipes.  All of the ingredients can be purchased on the Asian aisle of your favorite grocery store.  The technique is also very simple.  Then we moved to the cooking classes here once a month and those classes allow us to bring those recipes to life.  People make the items at home and tag us on our social media and are thinking about us even when they can’t come out to eat, which is pretty amazing to know.”  For those interested in the cooking classes or special events, the restaurant’s website has an updated list of what’s going on and an email sign up for notifications.  Between teaching at Blue Bamboo and FSCJ, Dennis loves that he is able to give back and see other people falling in love with the art of cooking.  FSCJ was a natural fit for Dennis.  It is full of excellent instructors and was recently rated one of the top 20 culinary schools in the nation.  Dennis loves the atmosphere and being surrounded by so much talent and watching his students move on to open their own successful restaurants.

As far as the future of Blue Bamboo, they will continue to evolve and create new menu items and events and also exceedingly provide for their customers and their special requests.  Dennis told us, “It’s cool that we have the facility and the ability to keep doing these things.  That’s what has kept us interested in it because it keeps changing.  We have customers that ask us ‘Will you make the such and such that you had ten years ago on the menu?’ which is amazing that it was that memorable.”  Some of the most memorable Blue Bamboo dishes come out of their kitchen during the holidays.  This is when Dennis and his kitchen manager Jimmy create dishes using classic Cantonese techniques.  For this New Year’s dinner, Dennis and Jimmy made Cantonese lobster.  “That is a dish that if you’ve had it and you know that you can have it made the right way, nothing will stop you from getting it again,” Dennis explained.  The beautiful focus on maintaining a customer-centric restaurant will keep Blue Bamboo flourishing in the Jacksonville food scene.  As for our opinion?  Blue Bamboo is in the top tier of dining choices in Jacksonville, and we wouldn’t mind that ice cream restaurant in the future either!