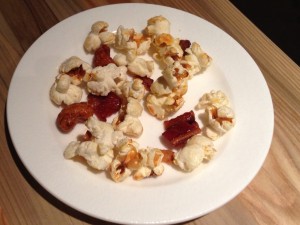 Overview of Restaurant and concept: I knew I was going to love this place when the first item I saw on the menu was kettle corn. Name another restaurant that offers kettle corn on the menu…….yep you can’t! Now name one where you can get both deviled eggs and a bone-in filet mignon….Got you again eh? When Chef Tom Gray left Bistro Aix to open his own passion project restaurant people understandably got excited.  In the weeks leading up to the recent opening the foodie scene positively buzzed with anticipation. Being a foodie myself I had very high expectations.  This place still blew me away!  Tucked away in a little corner of the St John’s town center is Chef Tom Gray’s new restaurant concept Moxie Kitchen and Cocktails.  Walking into Moxie you almost feel like you’re walking into a trendy restaurant in New York or Chicago. The place comes off as trendy and cool without trying too hard.  They’ve thought of all the little details right down to the salt and pepper shakers that look like little tree trunks. I can definitely see Moxie becoming the new “it” restaurant in town. 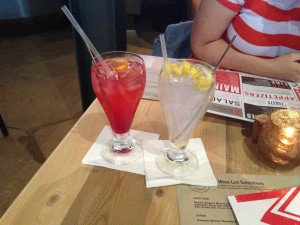 Food: People normally want to give a restaurant a category.  This one is tough to categorize. I’m convinced Chef Tom Gray basically thought of all of his favorite foods and put them on the menu category be damned.  Their open table reservations page calls it contemporary American cuisine.  I’m not sure even 10% of people dining there could tell you what makes it contemporary American.  The one thing I do think they’ll be able to tell you how awesome the food is when they finish their meal. We started off by ordering both of the handmade sodas.  The wayfarer- cranberry+ginger shrub, orange zest.  This one was okay. It was sort of tart and bitter. Neither one of us really liked it although it wasn’t necessarily bad. The other soda was The Scott Thompson- Peach shrub, anise, lemon zest.  I’ve never really liked anise but this one was decent and you mostly got a balanced slightly tart peach flavor.  Maybe I’m just a Coca-Cola addict but next time I’ll just have a Coke.  We started off with the kettle corn ($5) from the snacks portion of the menu. I know, I know…… restaurants aren’t supposed to serve kettle corn! Our kettle corn arrived in a paper bag like you might get at the fair which was a nice touch.  It was fair better than any kettle corn I’ve ever had at the fair! The popcorn had just the right amount of sweetness and was mixed evenly with sweet bacon and spiced cashews.  A beautiful blend of salty and sweet.  As soon as I began eating this little warm up item I knew I was going to love this place.  Serving kettle corn in a nicer sit down restaurant breaks all the rules in just the right way. Next up were the deviled eggs “our way, 4 ways”. Each of 4 eggs comes prepared in a different style. The styles were Cornichon and dill, bacon, smoked salmon, and old bay. Have you ever seen deviled eggs on a restaurant menu? Yeah me either. Deviled eggs are normally reserved for holidays in my house. I’m not sure I’m going to know what to do with myself now that I can walk into a restaurant and get them whenever I want.  All 4 eggs were great. The cornichon and dill was killer. It tasted a bit like the eggs my aunt makes on thanksgiving just a little less mustardy and with a slightly more dill flavor. The old bay was good but the old bay flavor was a bit overwhelming for my taste.  I don’t love old bay so I’m sure that’s why. If you really like old bay you’ll love it. The smoked salmon was really good and I’m not even a fan of smoked salmon normally. The “piece de resistance” was the bacon flavored deviled egg. If they put a platter of them in front of me I think I would not be able to stop eating them until I got sick or my stomach burst. Can you tell I love deviled eggs??? These were really good deviled eggs.  Next up we sampled the lobster chowder ($11)- old bay fries, chervil, tarragon. $11 seems like a lot for a bowl of soup right? I thought so but then this soup showed up and the price made a lot more sense. It was a lot more like an entrée than a soup.  When you order a soup you expect a broth or creamy liquid with small pieces of meat and veggies in. This one was not your typical soup. As you can see from the picture this one had huge chunks of lobster in the middle surrounded by delicious chowder with chunks of potato perfectly seasoned with old bay on the side. It was wonderful. If you like lobster soup don’t miss it. 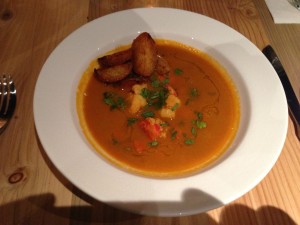 The first main course we tried was the Chicken and waffles ($22)-fried chicken, waffle pudding, pepper jelly.  Often when you get a fried boneless chicken breast it really doesn’t taste quite as good as a chicken breast fried with the bone in. Moxie bucks that trend. Their fried boneless chicken breast was great. The menu refers to the waffle as waffle pudding.  I wasn’t sure what to expect.  It was actually almost the consistency of bread pudding although slightly more firm. Yet, it still had the basic shape of a waffle. The pepper jelly was drizzled over the waffle and chicken like you might drizzle syrup. Often pepper flavors are overwhelming.  I feared the pepper jelly might be a little much for my taste buds. It had a much more mild taste than I expected.  The chicken and waffles were accompanied by a generous dollop of maple mousse. The mousse was the perfect flavor to complete the dish. The flavors blended together so perfectly and the mousse was so delicious I think I could just sit and eat a bowl of it with a spoon.   The other entrée we tried was the Lobster roll ($22)- slaw, nori fries, green tomato ketchup.  I’m sure there has to be somewhere else you can get a lobster roll in Jacksonville but for the life of me I can’t think of anywhere.  This one was a solid menu item but I wouldn’t write home about it.  The fries were good. The green tomato ketchup was unique and tasty. 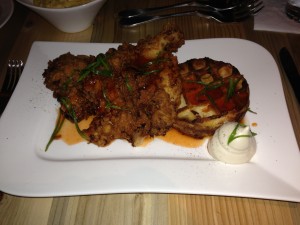 Chicken and Waffles according to Chef Tom Gray

After all that food we still couldn’t resist dessert.  Skillet cookie ($7)- Snickerdoodle cookie topped with vanilla ice cream and a cinnamon cranberry compote.  The contrast between the hot cookie delivered still in a mini skillet and the freezing cold ice cream was fantastic. The flavor of the cranberry compote took things to another level.   The last item we tried was the peanut butter stack ($8). It came plated with brûléed bananas and peanut brittle on the side. I could have just eaten the bananas and brittle and thought it was a great dessert. The peanut butter stack was out of this world! Even if you aren’t all that into peanut butter you’ll still love this one. It was actually lighter than it looked and It was heavenly. Don’t miss it. Save room. You’ll thank me. 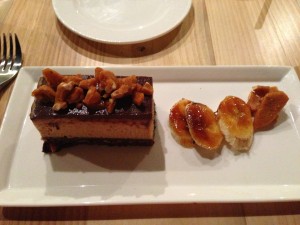 Service: We visited during their soft opening week so I expect things will be more polished once the restaurant is officially open.  We had a server and a server’s assistant.  I’m not sure if they were training still or there are always 2 people attending to you.  They weren’t busy since most people didn’t realize the place was already open. The service was very attentive and we never really wanted to for anything.  The only thing that was a little lacking was the server’s knowledge of the menu.  On a couple different occasions I asked a question about a dish and the server had to go ask someone then come back to explain the dish.  With such a unique menu having a knowledgeable server would make a big difference. There’s a lot of items on the menu and it can be a bit overwhelming. To be fair though in the soft opening week they’re still working out the kinks and learning the finer details so I expect as time goes on the servers will be much better at explaining menu items. 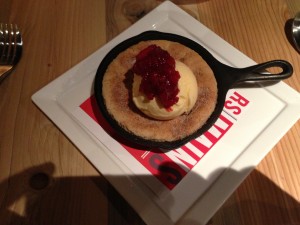