I’m a serious food truck addict, so I jumped on the invitation a few weeks ago to try Delish Kebabs, the first Jacksonville food truck to serve authentic Brazilian cuisine.  Delish Kebabs started serving October of 2013 and has been a regularly appearing truck in the food truck scene since.  Husband and wife duo Sandro and Heloisa work the truck taking orders and cooking their traditional Brazilian recipes.  Sandro had years of hotel banquet service under his belt before taking the move over to the food truck community.  Their menu is inspired by 20 years of family recipes that involve grilling all the meats over natural charcoal and firewood to infuse the meats with rich flavor without requiring seasonings on the meat.  Delish Kebabs is also an award winning truck—they took home the St. Augustine Food Truck Wars Bacon Award in 2014 for their bacon wrapped chicken kebabs. 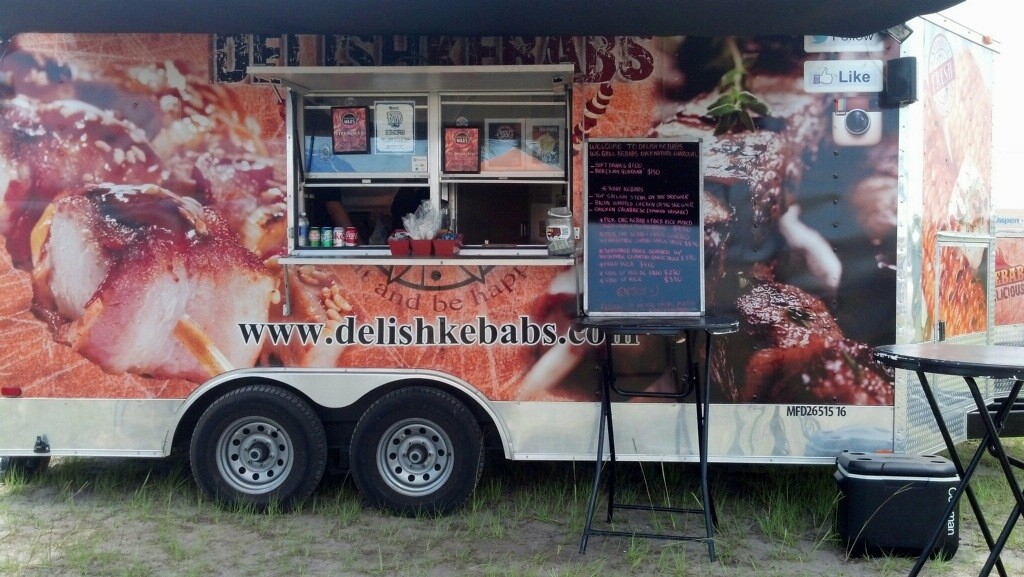 Sandro and Heloisa brought me all of their top selling menu items for me to try, starting with the steak kebab. Kebabs run $8.50-$9.50 depending on the sides chosen.  Each kebab is basically a full meal.  Delish Kebabs does not skimp on the meat that you’re getting and it is an incredible value for the price listed.  The kebabs are served sizzling hot and my steak kebab came over grilled onions, peppers, cilantro, and lime.  The steak is filet level tender, it absolutely melted in my mouth when I took a bite.  The only light seasoning on the outside is a little bit of coarse salt and that’s all that is needed.  It’s cooked to roughly medium to medium well with just a tiny bit of crust from the smoke.  Paired with the sweet vegetables this is a dish that is not to be missed.  It’s by far the best steak I’ve had in years.  I think the simple preparation combined with perfect execution makes this a really special menu item.  You should never have to smother a piece of meat in sauce or seasonings if it is prepared right, and Delish Kebabs is definitely doing this right. 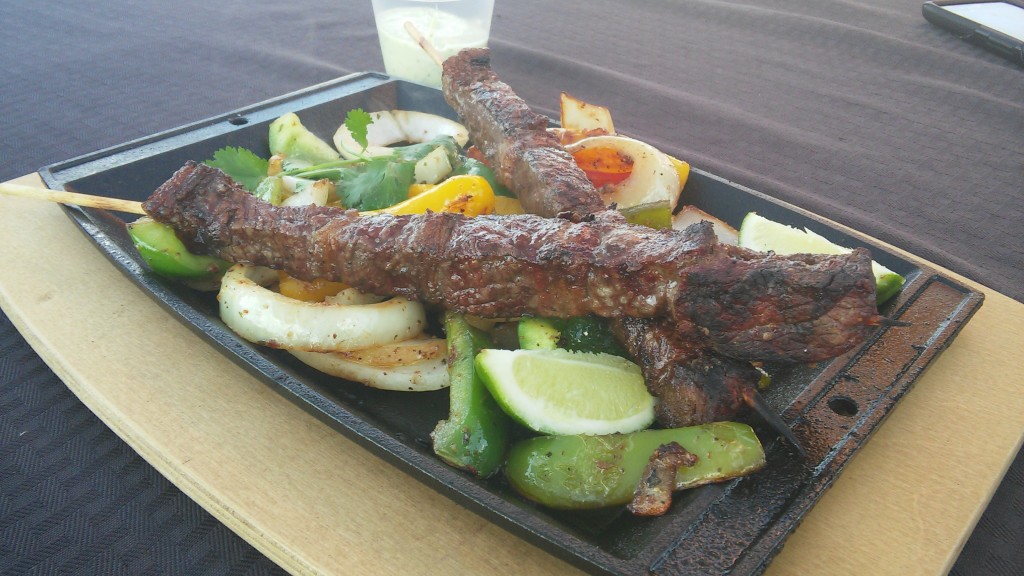 To give me a break between kebabs, they brought me two of their side items to sample.  The first was fried yucca ($4) served with a garlic cilantro dipping sauce.  For those who haven’t had yucca before, it is a thicker and creamier cousin to the potato.  Frying it turns it into the best french fry you’ll ever have.  Delish Kebabs yucca is fried to a perfectly crispy light brown on the outside while still being thick cut enough to allow for the creamy interior to showcase the mild flavor of the yucca.  The cilantro garlic dipping sauce is cooling and fresh.  It’d be a dream to have an unlimited supply of it because it is addicting.  They also brought me a dish of pico de gallo ($2.50) which paired excellently as a “side salad” to balance out the heavy portions of meat.  The pico is primarily fresh tomato with a light dose of peppers and onions and sprinkled with cilantro.  All the vegetables in the pico were crisp and ripe and well portioned.  It sets the standard for how pico de gallo should taste. 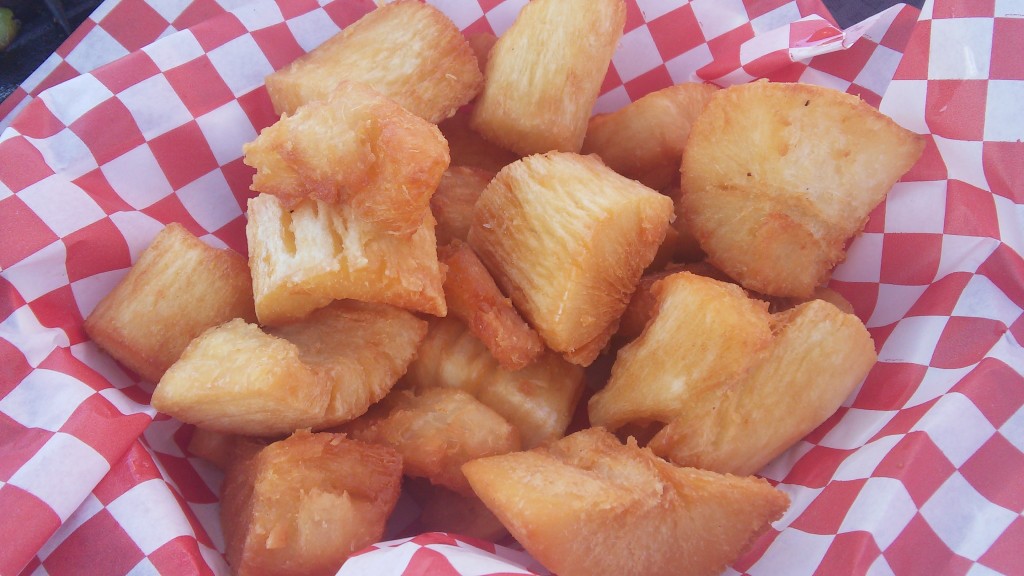 My last entrée was the bacon chicken kebab, again served with the garlic cilantro sauce and lime.  This is the entrée that has won Delish Kebabs highest honors at the Food Truck Wars.  Bacon lovers rejoice—this smoky crunchy bacon is going to send you into a bacon coma.  The bacon is so outstanding you almost forget the chicken as the carrier of the bacon, but it shouldn’t be overlooked.  The chicken holds as much flavor as the steak kebab, it’s just taken to the next level with the addition of the bacon.  Each cut of chicken is completely wrapped in thick cut bacon so you get a bite of both meats no matter what, and the cut of bacon has the perfect amount of fat that caramelizes under the smoke.  One bite and it’s apparent why they won bacon awards, they’ve figured out how to make bacon even better than it is normally.  After eating most of the chicken and bacon kebab without the cilantro garlic sauce, I tried the last bite with it.  It’s paired together for a reason.  The sweet sauce combines with the salty bacon for a real treat. 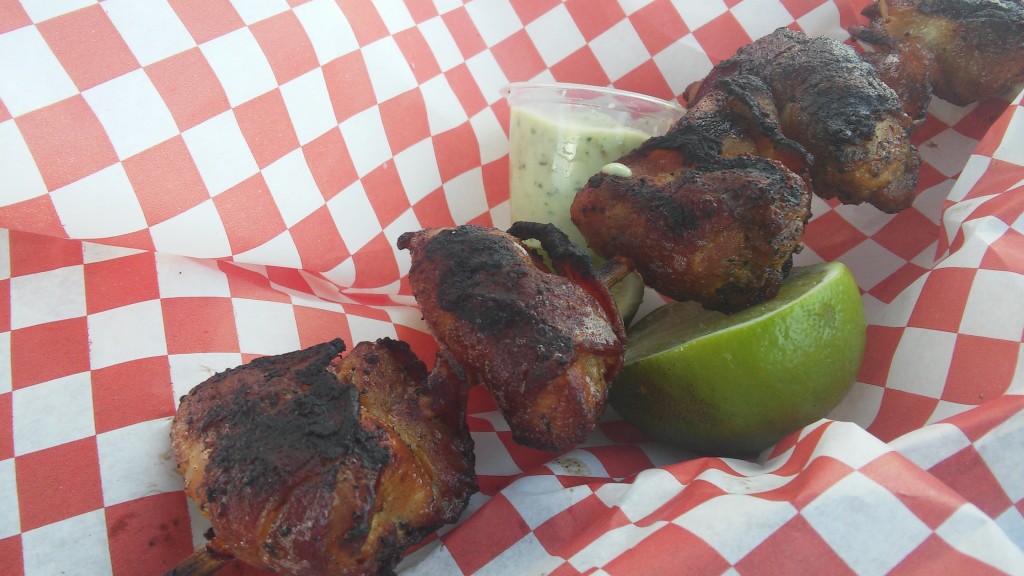 What I really loved about Delish Kebabs is that because of their short, basic menu they can intensely focus on the quality of what they’re doing.  Every unique flavor of every meat and vegetable was at the optimal flavor it could achieve.  I also loved the total authenticity of their food.  Sandro and Heloisa are delightful; expect 5 star service to be delivered along with your meal.  Delish Kebabs can be found regularly on Tuesdays at the Jacksonville Food Truck Court on Beach Boulevard, or follow them on Facebook or Instagram for other daily locations.