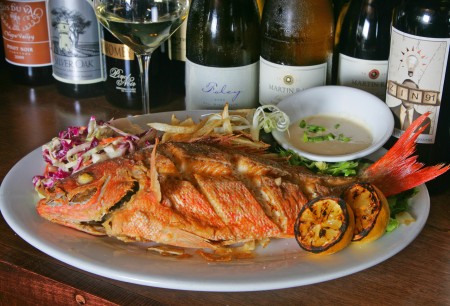 Chef Daniel Groshell is a true Jacksonville native, having been born & raised just a few blocks from Ocean 60. When he was young, Chef Daniel would ride his bike down to the little corner store that stood where Ocean 60 is now & order camel riders & limeade for lunch. The man who owned that store is now his landlord, so that part of his life has come full circle. His mother is an artist, so he spent much of his childhood travelling all over Europe. The Old World is where he began to truly fall in love with food. Tasting adventurous flavors from around the world inspired Chef Daniel, as did the nightly gourmet meals his mother prepared for their family. Chef Daniel attended school in Jacksonville & worked in several Ponte Vedra restaurants. He then moved to New York to attend the Culinary Institute of America, one of the most renowned culinary schools in the world. When we asked Daniel what motivated him to go to the CIA for his formal culinary education & make a lifetime commitment to the industry his answer was simple. “It (food) is definitely a passion. It has to be something you really, really love to do. It’s just a form of throwing parties. I love to throw a big party, fire up the grill, have a good time & cook for everybody, so it kind of fell into place. I wanted to own my own business, just like anyone else.”

Chef Daniel Groshell grew up at the beach, surfing & fishing like all the other locals. It was this love of the ocean combined with his travels,that led to his unique and flavorful cooking style which has become the trademark of Ocean 60. As for Chef Daniel’s cooking style, he describes Ocean 60 as having “American regional ingredients, but global flavors. We do everything with a classical French technique. We make our own bread, our own demi glaces, everything is made daily from scratch. We applied this to all our local seafood & the wonderful things we have available. We change our menu seasonally & our specials change nightly. It’s a creative process to be in here every night.” Expect to see a variety of cuisine on the menu nightly, ranging from comforting meatloaf to rich cioppino with Latin American, Italian & Sicilian flair.

As far as location, Ocean 60 blends perfectly into the ambiance of the Atlantic Beach neighborhood in which it has become a staple. Chef Daniel Groshell shared, “Atlantic Beach is a Bohemian art community, people are well travelled & well versed so they get it. They get it when you have fun & add Greek or Mediterranean influences to the food.” Establishing Ocean 60 within the tight-knit Atlantic Beach community proved to be a time consuming endeavor for Chef Daniel & his team. They literally built the restaurant themselves, including tiling and framing the interior to make it 100% their own. Post opening, it took years for people to turn the corner onto Ocean Blvd & find Ocean 60. Now, Chef Daniel feels that they have redefined the corner & it reaches down Ocean Blvd to the newly built patio at Ocean 60. They’ve created a niche experience that focuses on customer service. Chef Daniel & his wife make sure that all customer requests are accommodated as seamlessly as possible. Are you feeling lobster thermidor for a special occasion? Simply call ahead to see if it’s an option. Need allergy related or special preparation requests taken care of? Chef Daniel is not only willing to help, but he is happy to fulfill any & all special requests. Large groups & business meetings are easily accommodated in an intimate, private setting apart from the main dining room. This “above & beyond” mission is what Ocean 60 focuses on daily. 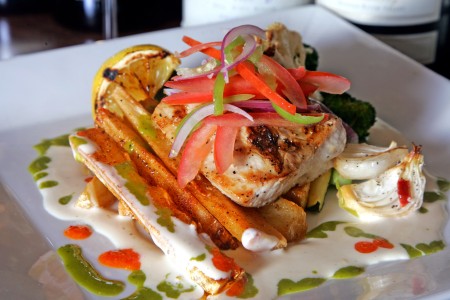 Ocean 60 established its reputation after opening in 2001 as strictly a fine dining destination. Shortly thereafter, in 2005, they expanded with the addition of a martini bar, the first of it’s kind in Jacksonville. Ocean 60 features some of the best happy hour martini deals in the area. Post recession, Chef Daniel Groshell knew he needed to change the daily restaurant operations in order to survive. He noted the rapid growth of the “fast casual” dining segment, so he began a revamp of Ocean 60 to capture fine dining in a casual, no frills atmosphere. Chef Daniel describes the new Ocean 60 as “fine dining as far as the quality perception. I still want to serve really amazing food. But as the chef & owner who goes to the markets, I can offer an amazing meal at a lower price. The hurdle currently is getting past the reputation I had in the beginning of being a special event location.” The new Ocean 60 offers salads & appetizers starting at $7, along with entrees priced as low as $15. Diners will be delighted to discover that Chef Daniel utilizes his passion & detail oriented technique to make every menu offering shine.

The future of Ocean 60 is bright as Atlantic Beach continues to grow. Ocean 60 offers a uniqueness that doesn’t exist anywhere else in Jacksonville. As opposed to a destination restaurant, you can come eat in Atlantic Beach at Ocean 60, listen to music at a number of neighboring venues & then go for a walk on the beach without moving your car. This ambiance wouldn’t exist without Chef Daniel being open & willing to evolve Ocean 60 to meet the needs of his clientele. According to Chef Daniel “the best consulting comes from my customers. If they’re talking, I’m listening.”