Opened in May 2008, Johnny Angel’s is a retro, 1950’s themed diner specializing in diner style food. Most of the menu items are named after 50’s icons like the Patty Duke patty melt, the James Dean burger and fries, the Buddy Holly roast beef sandwich, etc. By far, the largest section is breakfast, loaded with 3-egg omelets, pancakes, French toast, and combo platters with cute names like the Mae West, the Elvis Special, and the Breakfast at Tiffany’s. They also offer salads, sandwiches, chili, milkshakes, malts, and a variety of desserts.

Located at The Shoppes at East Pointe Landing on St Johns Bluff Road in Jacksonville, my dining partner and I decided to try out Johnny Angel’s for lunch based on numerous positive online reviews. 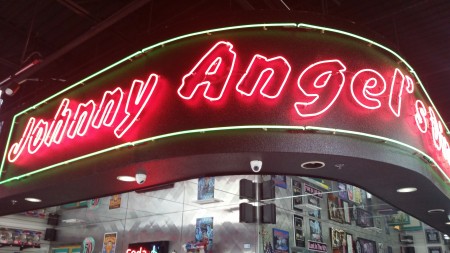 Walking in Johnny Angel’s, I’m greeted by the bright neon light as well as the friendly wait staff, however, looking around the place, it seems that Johnny Angel’s is less 1950’s themed and more of a restaurant decorated with 1950’s kitsch items.

After perusing through the expansive menu, my dining partner and I decided on sandwiches and sides for lunch. 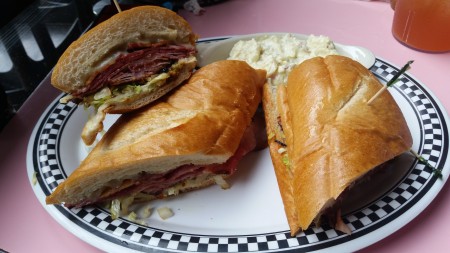 I asked the waitress what was Johnny Angel’s signature sandwich. What are they known for? When people tell others to eat here, what do they tell them to order? One of the sandwiches recommended was the Route 66. It had bacon, ham, salami, provolone cheese, lettuce, onions, mayo, and something called Peruvian Gold Grilling Sauce. My dining partner ordered the Cloud Nine Club. It was a basic club sandwich with turkey breast, ham, bacon, lettuce, tomato, and mayo.

The portion sizes are huge, especially for lunch. But I suppose when the name of that menu section is “Superman Sandwiches” I should’ve expected that. The Route 66 sandwich was cut into three portions. Put together, it would easily dwarf one of those famous five-dollar-footlongs. The Cloud Nine Club was a tower of a sandwich. Most club sandwiches are triple-decker. Johnny Angel’s Cloud Nine Club is a quad-deck. Visually, the sandwiches looked good, if somewhat oversized. Both sandwiches came with a side of potato salad.

So does Johnny Angel’s food measure up to the hard work of the décor and the 1950’s theme?

Sadly, no. The sandwiches weren’t bad, per se, it’s that they weren’t great or remarkable. There was nothing in either sandwich that will make Johnny Angel’s a destination diner for me. Sandwiches give a chef a great platform to put their spin on a meal; a way they can separate themselves from every other similar sandwich place in town. Maybe a special house made spread, or a protein that’s not normally known to be on that type of sandwich. Something to remember it by. And that’s the thing with what we ate today. It was nothing special or memorable.

The Cloud Nine Club was just a basic club with turkey, ham, and bacon. There was nothing done to it. The menu advertised the club is made with Texas Toast. I didn’t get Texas Toast, just regular toast. As unwieldy as the sandwich was, I was glad that it wasn’t stacked inside of four pieces of 1-inch thick Texas Toast, so I didn’t bring it up to the waitress. The Cloud Nine Club is no different or better than any other club I can get in Jacksonville. The meats tasted like regular cold cuts I can get at any Publix or Winn-Dixie. There was no “Johnny Angel’s” spin to it and nothing that would make me want to order it again. Bacon is supposed to make anything better, but I guess there are exceptions to every rule. Maybe if it was thick cut pepper bacon, some sort of smoked wood bacon, or just more of whatever type of bacon they did use, the rule may have applied. There was nothing that elevated the concept of this club sandwich that justified a $9.50 price tag. And for $9.50, if I can get a club sandwich anywhere else cheaper (or better yet, feel like making it myself at home), I will. 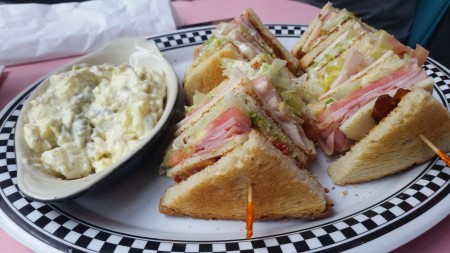 The Route 66 sandwich ($9.99) is purportedly one of Johnny Angel’s signature sandwiches. It starts off as a classic Italian sandwich; with ham and salami. They add bacon, because, well, it’s bacon, and Peruvian Gold Grilling Sauce. On paper, this should be a great sandwich. The ham and salami are grilled and the sandwich is served warm. But with the only accouterments being lettuce and onions, I feel that Johnny Angel’s missed a real opportunity in creating a standout sandwich. Because the sandwich was served warm, my palate craved something cool. Tomato and pickle slices would have done wonders to add depth and texture. Substitute spinach for the lettuce and now you’ve got a sandwich. But it wasn’t all rough riding on Route 66. The Peruvian Gold Grilling Sauce was on point. Imagine if a classic Italian dressing and yellow mustard had a kid. Now imagine that kid hung out with Herbs and Spices and you have Peruvian Gold Grilling Sauce. It was fantastic; a little sweet, a little heat, a little tart. It was an oasis in an otherwise lifeless desert drive down Route 66.

On a side note, the Peruvian Gold Grilling Sauce isn’t a Johnny Angel’s original, but it is made and bottled locally by a company called Tobago Keys. You can buy a bottle at the restaurant or online. 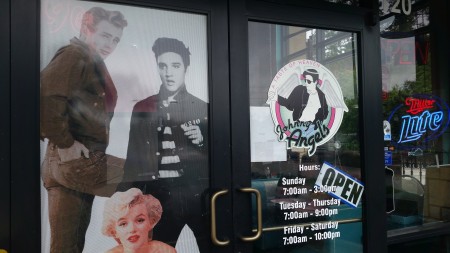 Aside from the Peruvian Gold Grilling Sauce, the only highlight of the meal was the side of potato salad. It was creamy, seasoned nicely, with a thick mayonnaise base; the potatoes were cooked al dente, and had a good toothsome texture. I actually preferred the potato salad to the sandwich.

I’m not saying that Johnny Angel’s is necessarily bad, it’s just not great. It makes me wonder what people ordered that gave it such high marks online. If someone asked me where to go to get a great sandwich, I’m likely to recommend any other diner/sandwich place in Jacksonville before I recommend Johnny Angel’s.