We often lament that the westside does not have the restaurant options that Riverside and the urban core, southside, and the beaches have. True enough that Westside residents can drive to Riverside, there are precious few food destinations on the Westside. But we recently discovered what far Westsiders already knew: there are some legit wings and quality pizza in Oakleaf Plantation. 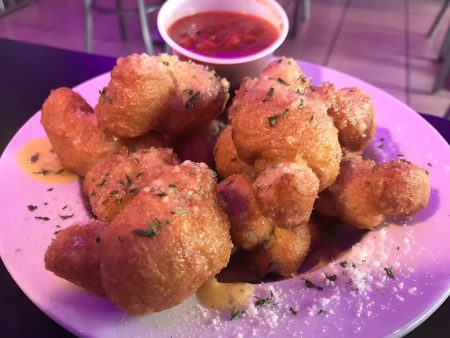 NYC Meatballs and Pizzeria invited us out to see if their food stacked up against the competition. Owner and New York Pizza extraordinaire, Rocky Javad, tried many pizzas in town when he moved to Jacksonville seven years ago, so he’s tasted the good and a whole lot of the not so good.


Located in Phase 2 of Oakleaf Plantation, NYC Meatballs and Pizzeria looks unassuming in the Publix shopping center where it is located. One step inside and you know you are not in an average pizza place. Rocky and his team have transformed a standard box space into an American and pop culture themed restaurant with an edge. We wondered if the American flags we saw around the restaurant were because of the Fourth of July holiday (yes, it took us a while to get this article posted, sorry!), but it turns out that is just what the restaurant represents: the best of New York and the American spirit. 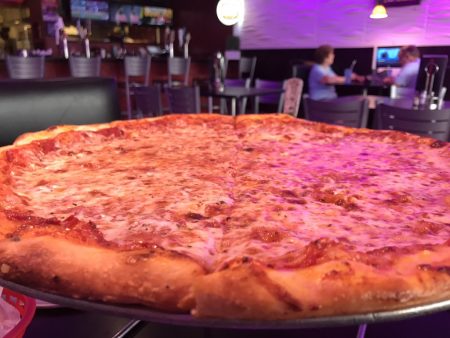 We tried what felt like the entire menu, so buckle up:
Starting with the garlic knots, NYC Meatballs and Pizzeria serves them baked or fried. A lot of times garlic rolls are mostly just plain bread rolls with a dot or two of garlic butter. That is not how it’s done at NYC. We had the fried garlic knots and we are believers. Aside from the deliciousness of a fried roll, these babies had a generous amount of garlic butter sauce melted over them and sitting in the bottom of the bowl. If you want garlic knots with flavor, these are the ones for you.
It’s not all artery clogging goodness at NYC Meatballs and Pizzeria. We tried two salads: the Greek and the Kale Bacon salad. Both were very generous in size. The Greek salad had plenty of toppings in the way of tomatoes, cucumbers, pepperocini, feta, and Kalamata olives. The kale salad was made with a mature kale with stems and it was topped with warm bacon and croutons with a fantastic creamy bacon dressing. You really have to like kale to like this salad, but even those of us who don’t appreciate kale can enjoy a bite or two of the salad. We think most people tend to prefer baby kale without the stems.
Next up was the meatballs. These are no joke! The meatballs are massive at a quarter pound each. An order of meatballs comes with three large meatballs with fresh made in house marinara sauce over top. They come with your choice of mozzarella or ricotta, and regardless of which you choose they go back in the oven to make the cheese melty and join the flavors together. Rocky’s meatball recipe comes from his Uncle Bobby in New Jersey and has been featured in the New York Times. It’s a 40-year-old recipe, so it is tried and true. The meatballs are all beef, made with sirloin. You can taste that they are made with quality ingredients and respect for the recipe. The meatballs are also available on a sub. You can’t go wrong with these.
NYC Meatballs and Pizzeria may not have “wings” in the name, but they do a killer job at those as well. There are about a dozen flavor and sauce varieties, many of which are made or at least spiced up a bit in house. We had Cajun Ranch and Spicy Teriyaki. The wings are nice and meaty with a crisp skin because they are fried to order every time. This means it takes at least 15-16 minutes to get your wings after you order them, even longer if the restaurant is very busy. But the proof is in the first bite. It’s common in restaurant kitchens to par cook chicken wings(cook wings part of the way in advance) and then finish them off in the fryer when they are ordered so they come out of the kitchen much quicker. The difference in quality is noticeable for a true wing lover but the average diner is so used to it that they don’t typically notice. Rocky could do that, but he’s just not going to cut quality for efficiency. His allegiance is to the integrity of the food. The Cajun Ranch wings had tons of fresh made sauce on them. They had a kick to them, but weren’t overly spicy. If you can tolerate a mild spiced chicken wing, you can handle the Cajun Ranch. We tried the Spicy Teriyaki after the Cajun Ranch, so the Spicy Teriyaki didn’t honestly taste terribly spicy. That’s because it’s at about the same spice level: a level one or so. It’s not going to set your mouth on fire, but it’s not just the sweetness of teriyaki sauce. It has a fun kick.
The pizza we tried was as straightforward as it gets: a New York style cheese pizza. Pizza purists know that you can tell the quality of a pizza based on a slice of cheese because there are no toppings for the pizza the hide under. It has to stand for itself. The pizza at NYC Meatballs and Pizzeria is of a quality you won’t find many other places. It’s thin, the crust has a nice snap to it, the cheese is perfectly browned. It all just works. One reason for that, besides Rocky’s personal and family pizza history, is the water. Yes you read that right, the water. New Yorkers swear the water in New York makes all the difference in the pizza dough. It’s not unheard of for New York pizzerias outside of New York to literally ship water in from New York to make pizza with. Rocky looked into that and the cost was exorbitant. Instead he talked with a company that set him up with a specific water filtration system which he swears gives his water the same quality and make up of the water you would get out of the faucet in New York. You always hear in Florida how bad our water is, but if you are a native it’s just what you are used to. It’s hard to believe that water can make that much of a difference, but New York pizza is as much of a science as it is a labor of love.
We also tried the poutine. This bowl of fries with gravy and cheese curds is not often seen in the South. Hailing from Canada, poutine caught on long ago in the NYC/New Jersey area. NYC Meatballs and Pizzeria’s version of poutine is pretty good. The cheese is excellent and the fries are seasoned well. The gravy was decent for a ready made gravy. It’s a great dish to share.
We finished our feast with cannoli. While these are a generous size, they were just okay for us. 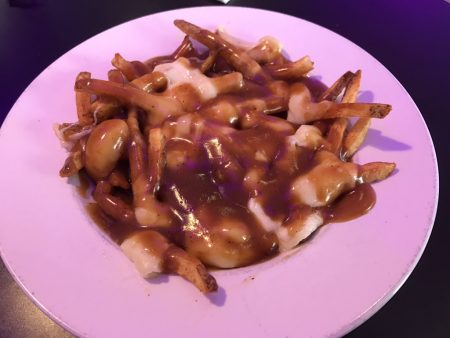 All in all we were impressed with NYC Meatballs and Pizzeria. Over and over we were wide-eyed with the portion sizes. You really get the bang for your buck there. For an area of town that is oft left out of the food scene, Rocky is bringing some serious eats. The high points were the fried garlic knots, the meatballs, the wings (especially the cajun ranch), and the pizza. Rocky knows his cuisine and his customers and he delivers on the reputation of NYC Meatballs and Pizzeria. Rocky and his family may be transplants to Jacksonville, but we sure are glad they now call it home. 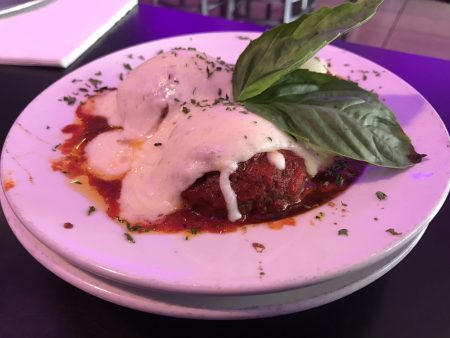 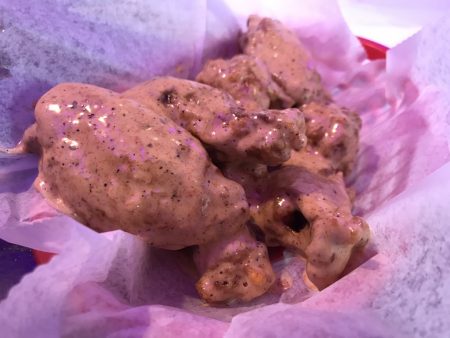 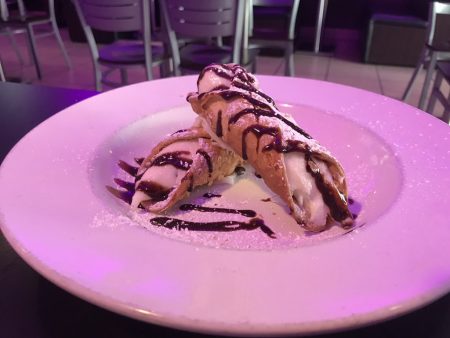