Driving down University Blvd. we noticed a new restaurant popped up in the shopping center with Hala Cafe and Sam Won Garden Korean BBQ. We put it on our list of places to try and I finally made it back this week after finding myself on this end of town after a meeting. That restaurant is El Taino. El Taino offers Puerto Rican and Cuban cuisine ranging from everyone’s favorite staple the Cuban sandwich to mofongo to churrasco(skirt steak) and a whole lot more. The menu is actually pretty huge with plenty of options for every taste. The main dining room is fairly large for a small out of the way restaurant and connected to it is a large party room where it’s obvious by all of the event flyers in the restaurant that El Taino hosts some huge parties with a DJ, dancing and a whole lot more. Almost no one in the restaurant spoke English. That’s usually a sign that the food is going to be really good. I was getting pretty excited. Unfortunately that excitement ended when the food arrived. 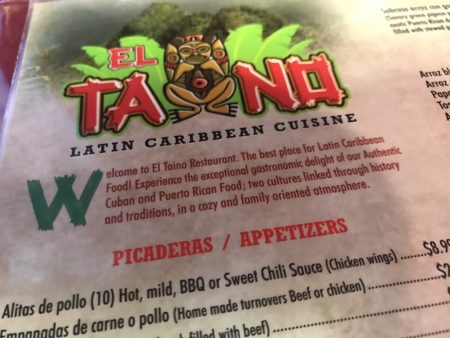 I watched the waitresses get together and figure out who would serve me when they realized I didn’t speak Spanish. Two waitresses walked up and one translated for the other who served me. Again, if I’m the only one in the restaurant who speaks English I’m pumped because the food is usually super authentic. Some of the best meals I’ve had in Miami were in out-of-the-way places where they had to search the restaurant for someone to translate for me or where I just point at the menu and order. 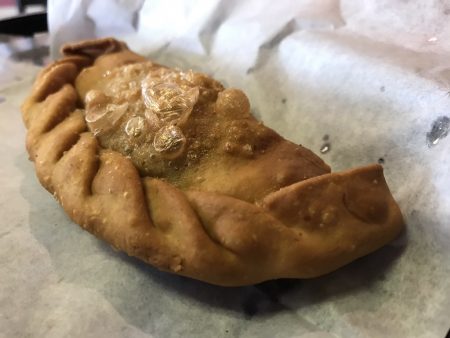 I ordered the beef empanada to start things off. This is a quick and easy starter that’s hard to mess up. This version was fairly bland and a bit stingy on the beef. It also showed up with a giant plastic-looking translucent bubble in the middle of it. It was just dough but definitely had an odd appearance that most chefs I know wouldn’t have allowed to be sent out to the table. I’ll pass on it if we visit El Taino again. Next we dove into the pulpo (octopus) in fried green plantains. For this dish the chef makes little plantain cups and fills them with octopus plus onions, peppers and seasonings. I’m a HUGE octopus fan so I order it just about anywhere I find it on a menu. This octopus was some of the toughest I’ve ever been served. We couldn’t chew it so after attempting to eat one plantains cup’s worth I gave up. Definitely avoid this dish. Last we dove into the Cuban sandwich. I had high hopes that this would be the thing to salvage the meal. Unfortunately those hopes were quickly dashed as this Cuban was simply bland. The pork was bland. Even the pickle was lackluster. Every component bland. Why is it so hard to get a decent Cuban in this town? 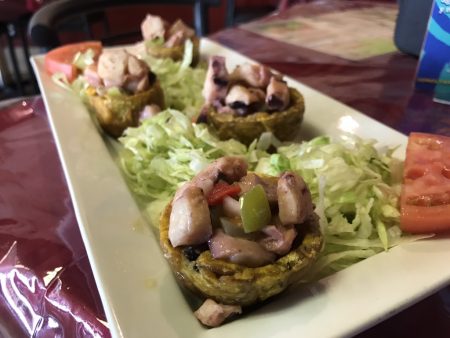 Although the waitresses seemed a bit disinterested and not particularly warm, the service was pretty solid. Drinks stayed full and food arrived as ordered and in a timely fashion. If the food was as good as the service we’d probably return. Unfortunately the food was pretty awful. Normally we’d make sure to order more items before writing a review but this stuff was so bad I’m confident there’s no salvaging this one. 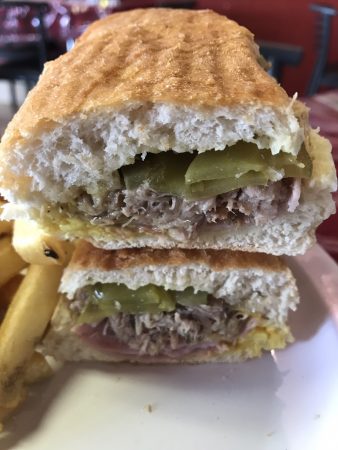 Note: other online reviews say the mofongo is fantastic so if you do decide to head over to El Taino to see for yourself I’d shoot for the mofongo.