We Took Chef Chris up on his offer for a do-over and boy are we glad we did.  Read about our second visit to Taste Food Studio.

We recently stopped in at Taste Food Studio. It’s a newer restaurant in the Tinseltown area. We thought it had a great name. Taste Food Studio is a collection of words that when put together gave us visions of chefs playing with flavors and exploring new concepts in dishes of food. When we walked in the restaurant, it didn’t even feel like we were in Jacksonville anymore. The restaurant had a young, hip vibe to it, from the live music to the art on the walls, to the customers at the tables. We’ve been to restaurants that felt stuffy when all those things were pulled together, but Taste Food Studio felt fun.

Taste Food Studio is located in a small strip of businesses, its neighbors being a gym and a daycare.
9726 Touchton Rd.
904-647-8298
www.tastefoodstudiojax.com

Food: Taste Food Studio has a great selection of small plates, along with a variety of tacos, burgers, flatbreads and pizzas, and entrees. The night we visited we shared several small plates.
We had Tasty Meatballs, Truffle Mac ‘N Cheese with Chorizo, Crispy Calamari, Grilled Filet Medallions, and a bowl of Lobster Bisque.

First up, the lobster bisque. A good lobster bisque will have layers of flavor with sweet lobster in the salty cream with sherry cooked in. This lobster bisque was flat, with small bits of lobster throughout left to do all the flavor work on its own. It was also delivered luke warm, which turned out to be a theme during our meal at Taste Food Studio. 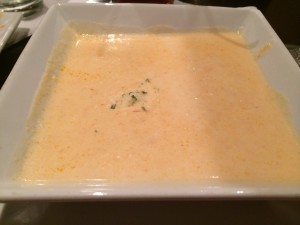 The meatballs (“Signature recipe” meatballs and mozzarella wrapped in puff pastry. Served with marinara.) were a great concept. A meatball wrapped in puff pastry, topped with marinara isn’t something we’ve seen before and it sounded delicious. These came 3 to a plate and each one was about the size of a tennis ball. Unfortunately it came out room temperature and had very little flavor. Even the inside of the meatball wasn’t warm at all, which was equally disappointing and disgusting. The meat was a bit chewy, which is strange for ground beef, but perhaps that was the mozzarella cheese congealing back together due to the lack of heat. Such a great idea of a dish was such a big letdown. 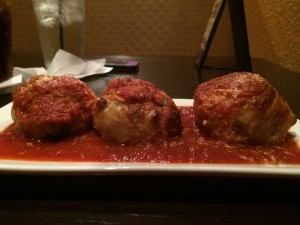 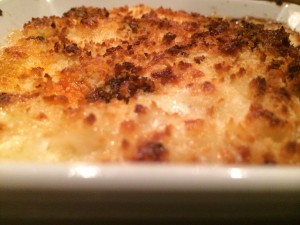 The crispy calamari came out cold and chewy. The chili sauce was a nice accompaniment to the calamari, but the calamari was just plain bad. So many restaurants do a decent job at fried calamari that this isn’t an area where a restaurant should be screwing things up. 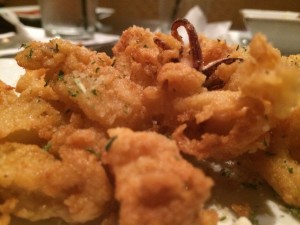 The last dish to come out was the grilled filet medallions. At this point in the evening we weren’t expecting much. Everything had been room temperature or colder and lacking in flavor. Our waitress did bring an additional order of calamari as an apology for the wait. This order of calamari was warm, though it was still tough and chewy. The filet medallions were probably the best thing we ate, but they weren’t a standout, nor were they very warm. They were cooked correctly (we had ordered them medium) and the sauces added some flavor. But the meat itself was very tough and we can’t blame congealing cheese this time. 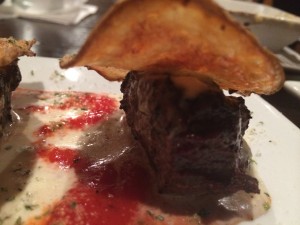 Service: We were seated quickly when we arrived at Taste Food Studio, but it took about 8-10 minutes for a waiter or waitress to come by and take our drink order. We saw our waitress when she brought out each dish, but otherwise she was apparently needed elsewhere. When we left, some folks seated in the booth next to us asked what we liked and what we recommended. We felt bad telling them that everything was cold and nothing was particularly delicious, especially after they shared their frustration on waiting so long for someone to get their drinks.
We did share on twitter our concern about all the cold food and Taste Food Studio replied, apologized, and offered to have us back for a do over on the house. They said “No excuses our heat lamp was broken”. Hopefully customers were only served cold food for a night or two. Regardless of the reason, the food was not great, the service was not great, and we couldn’t figure out what so many people were doing at the restaurant given our experience.

This was one place we walked in with really high hopes. Unfortunately it was the worst restaurant we’ve tried so far and it isn’t even close.  We’ll be taking them up on their offer for a do over to see if we just caught them on an off night.

We Took Chef Chris up on his offer for a do-over and boy are we glad we did.  Read about our second visit to Taste Food Studio.