When we heard there was a new tapas restaurant opening up in Springfield we were really, really excited.  For folks who like to try lots of things when they go to dinner, tapas restaurants are like nirvana.  Open for just a couple of months, Tapas Old World is a little Spanish Restaurant offering up a variety of Latin American dishes.  We had high hopes for another Spanish restaurant in town where we could get beautiful Latin American cuisine full of passion and flavor.  Alas, it wasn’t meant to be…..

We actually tried to visit Tapas Old World a month ago, but as we walked through the front door we realized that apparently the air conditioner was not working.  The restaurant was sweltering.  It was too hot for us to handle so we went next door to have dinner at one of our favorites, Uptown Market.  This week we went back hoping that the air conditioning was fixed so we could get a chance to try these Spanish tapas we’ve been so excited about.  This time when we walked in, the place wasn’t quite sweltering but it was clear they don’t use the air conditioning much.  We found a table directly under a fan and asked the waitress if she could turn the fan on for us.  She told me she would but never ended up doing so and we never ended up pressing the issue.  It has become a habit of mine to ask servers to answer two questions.  What are the most popular dishes on the menu?  What are your favorite dishes on the menu?  This gives me an idea as to what most people seem to think is good and also often turns up some of the unsung heroes of the menu in the servers’ personal choices.  When I asked those questions the waitress told me that the cheese plate was popular and the shrimp and pork skewers were also popular.  She then told me that the only thing that she’d really had on the menu were the salads.  She had only been working there a couple of weeks.  Obviously, if you are a newer restaurant your servers should have tasted a few of the dishes to be able to give your customers some guidance on what they might enjoy.  Aside from this issue and the failure to turn on the fan, our waitress seem to really care and provided us fairly good service. 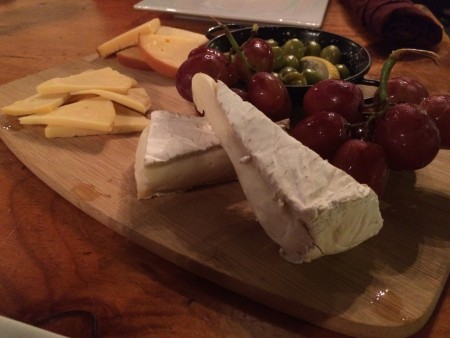 Tapas Old World – Fruit and Cheese (but no bread)

We decided to order the cheese plate ($12) to start.  After we ordered the waitress brought out some bread and olive oil with spices.  I’m fairly sure they bought this bread at Publix.  No chance they made it.  It wasn’t good but at least it was warm.  There were four little pieces of bread and if you wanted more they charged you $1.50 for 4 more little pieces.  How chintzy can you get?  So we ate our four little pieces of bread with oil and waited for our cheese plate.  When the cheese plate arrived it was brie, manchego, and a third cheese I can’t seem to recall that was fairly basic as well.  They easily could’ve gotten this cheese at Publix as well.  In addition to cheese, the plate also included grapes and green olives.  As we got ready to dig into our cheese plate we realized the waitress never brought crostinis, bread, crackers, or anything else to eat the cheese with.  We asked the waitress if she could bring us some bread or crostinis to use in order to eat the cheese.  She said none came with the cheese plate and it would be another order of bread (4 little pieces of French bread) and it would be another $1.50.  Huh?????!!!!  We felt like we were being pranked or something.  So I spend $12 on a cheese plate which comes with cheese I could easily get at Publix and then you want another $1.50 for something to eat it with?  Is this real life?  So we paid $1.50 for a little more mediocre (at best) bread and ate our terrible cheese plate.

Next to try was the Sopa de Mariscos ($12).  This dish was a hearty seafood stew that looked beautiful as it was delivered to the table.  We were really excited to try it until we took one bite and realized how horribly the shrimp in the stew had been overcooked.  They were nearly impossible to chew and the rest of the stew was virtually inedible as well.  Rarely do we send a dish back or ask for it to be removed from the bill, but in this case when the waitress asked if we enjoyed it, we had to tell her that is was awful.  She took it back and we could hear her apologetically telling the chef that we said we couldn’t eat it, like she was scared he’d be angry or something. 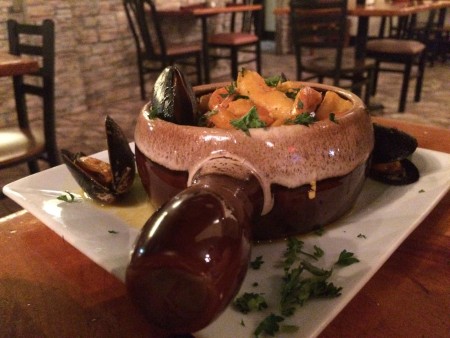 Next we ordered the mussels, which ended up being okay.  They were neither good nor bad, but clearly that’s a large improvement over what we’d been served so far.  Last we tried the Puerco Asada ($13).  This roast pork dish came with mushrooms and white rice.  The pork was very very good.  It was full of flavor and very tender.  Unfortunately the white rice it was served with was in both taste and texture identical to minute rice.  Gross!  Normally we never leave a place we’re reviewing without ordering dessert, but in this case the meal had been so miserable we just couldn’t bring ourselves to stick around any longer. 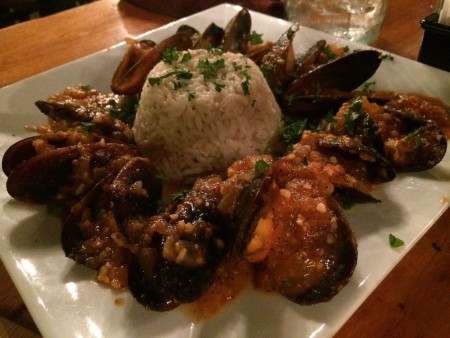 Tapas Old World is without question one of the worst restaurants we’ve visited in Jax.  From lack of air conditioning to no bread with the cheese plate to minute rice, this place is as chintzy as it gets.  If you live in Springfield and you’re dying for Spanish Tapas grab some French bread, cheese, and minute rice at Publix and make the meal yourself.  At least you’ll have air conditioning while you eat. 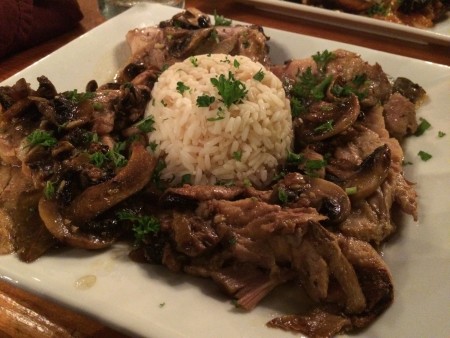