Tucked away among the multitude of tattoo parlors, vape joints, and a few questionable looking pawnshops dotting Atlantic Boulevard is a surprising upscale restaurant in the North Beach Shopping Center called North Beach Bistro.  I say surprising because I didn’t expect an upscale restaurant in this part of Atlantic Boulevard.  There are a few pubs, fast-casuals, and the like in the area, but a white tablecloth, cloth napkins, nightly rotating menu type of place?  Did not expect it.  In fact, the only reason I found out about this place was because of an online voucher I received.  When I researched North Beach Bistro online, I was amazed at the high level of thought and creativity in Chef David Seavey’s menu and had to try it. 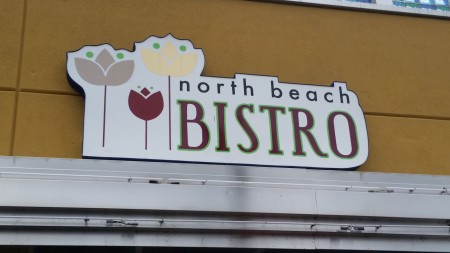 North Beach Bistro opened in 2008 and specializes in American and Continental cuisine in a fine dining setting.  Walking into the restaurant, the bar and main dining areas are separate.  The bar is on the left, the main dining room is on the right.  The dining room also boasts an art gallery, showcasing paintings from local artists.  The dining room is impeccably decorated, with dark hardwood floors, matching booths and tables, and low ambient lighting.  The kitchen is visible from the dining room so you can see your order being prepared.

We were seated quickly. Our server was friendly and very knowledgeable about the menu.  North Beach Bistro’s menu specials rotate nightly.  However, they do have a standard menu consisting of fresh fish and seafood, Kobe beef burgers, pasta, and their own version of a bouillabaisse with Mayport shrimp, sea scallops, mussels, calamari, and fresh fish in a tomato fennel white wine broth.  Since I had an online voucher (one of those “$50 for $25” types), my dining partner and I decided to go nuts and go for a full three courses: appetizer, entrée, and dessert.  Yes, I too like to live dangerously. 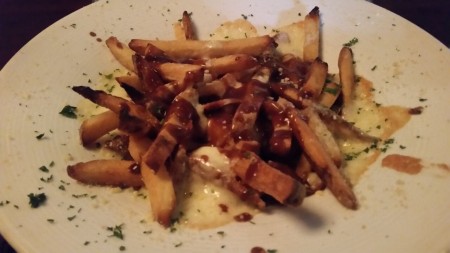 For the appetizer, we decided on the Truffled Poutine.  Poutine is a Canadian dish normally consisting of French fries, cheese curds, and brown gravy.  North Beach Bistro takes what would normally be considered “pub grub” and adds their special touch to it.  In this case, it’s all about the gravy.  Instead of a basic brown gravy, North Beach Bistro uses a Truffle demi glace.  The demi glace was rich, thick, velvety, and because of the truffles, full of umami.  It left a nice aftertaste long after the fries and cheese curds were gone.  Let’s just say a lesser man would’ve licked the bowl.

For the entrees, we decided to go with one item from the rotating nightly menu and one item on the standard menu.  For the special, my dining partner ordered the Trufit porcini rubbed grouper with roasted portobello mushrooms and balsamic glaze served with sautéed brussel sprouts, corn, and white acre pea succotash.  Our server educated us on the name “Trufit.”  This is one of the healthy menu choices.  The chef didn’t use butter, cream, or high fat oils to cook the Grouper and no starchy sides.

Honestly, I was skeptical.  I didn’t think you could get a good, tender, flavorful grouper without the use of some kind of fat to baste it in.  But that’s what professional chefs with many years in the business do – shatter skepticism and exceed expectations.  The grouper had a beautiful, crispy exterior and a tender, flaky interior.  The porcini rub added a great earthy flavor.  The white acre pea succotash was outstanding.  I’m not a big fan of peas, but I couldn’t stop eating this succotash.  My dining partner and I were fencing with our forks to get the last few bites of it.  If you’re looking for a healthy alternative or you’re watching your weight, this is a great option. 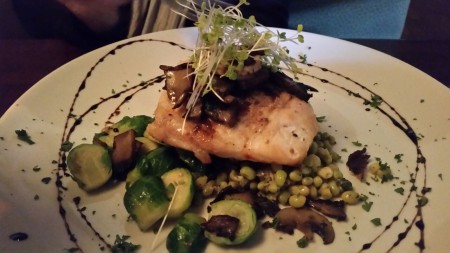 So while my dining partner decided to go healthy, I decided to go in the complete opposite direction.  From the standard menu, I went with the Braised Black Angus Beef Short Ribs, served on a bed of mushroom risotto and topped with fried onion straws.  It also came with a side of roasted mini carrots and green beans.

When the plate came, I stopped and stared at the sheer beauty of the slab of beef set before me.  The short ribs were so tender; I didn’t need the butter knife to cut into them.  They simply fell apart at the mere thought of my fork piercing it.  The flavor was deep and beefy.  It melted in my mouth.  With every forkful, I chewed a little slower to better appreciate the well taken care of cow that sacrificed its life for my nourishment and enjoyment.  It’s as if my perception of time slowed down as I ate; my brain’s way of telling me to stop, let the flavors meld together and roll around in my palate a bit. 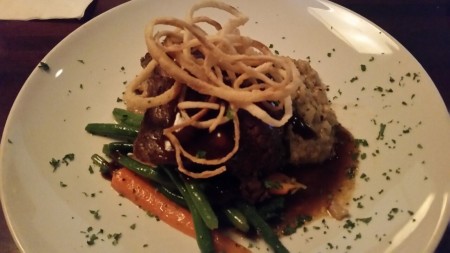 The mushroom risotto was equally fantastic.  I love risotto.  It’s a deceptively difficult dish to make because it’s so sensitive and finicky.  Don’t believe me?  Watch any episode of Hell’s Kitchen and tell me those chef-testants don’t feel the wrath of Ramsey over a poorly cooked risotto.  There’s a very short period of time before a beautifully rich and creamy risotto turns into something you can spackle walls with.  North Beach Bistro’s risotto was perfect.  The Arborio was a perfect al dente, while still creamy and mixed perfectly with the braising liquid from the short ribs.  The sides of roasted carrots and green beans were excellent as well.  They had a nice crunch to them and helped alleviate the guilt of the very rich and decadent beef and risotto.

For dessert, we decided to share a cinnamon brown sugar crème brulee.  For me, crème brulees tend to be a little too much on the sweet side.  But with the use of cinnamon and brown sugar, it had a nice balance of sweetness. 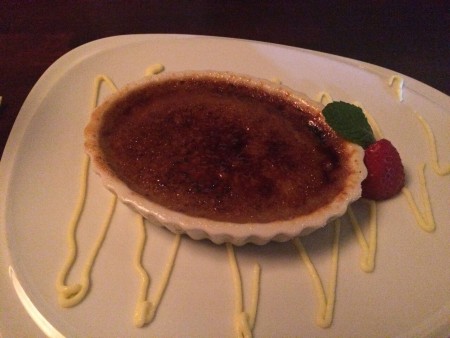 Overall, this was a great meal.  North Beach Bistro truly is one of Atlantic Beach’s best-kept secrets.  It could easily be in the more traditional fine dining locations around the city – Ponte Vedra, Riverside, closer to the beach, etc.  So don’t let the location fool you.  North Beach Bistro is high on my list of upscale dining.