Located on the corner of San Marco Boulevard and Nira Street, Kitchen On San Marco is a relatively new addition to the Jacksonville food scene.  Opening up in April of this year, it has quickly become one of the top farm-to-table restaurants in town.  Their close relationship with Culinard (the Culinary Institute of Virginia College) provides students at the school a place to hone their skills and gain real-world experience in the culinary field.  But despite the honors they have earned since their opening, Kitchen On San Marco still seems to be flying a bit under the radar with folks outside the foodie community.  A lot of people have heard of them but have yet to dine there.  We recently stopped in for dinner to check them out for ourselves. 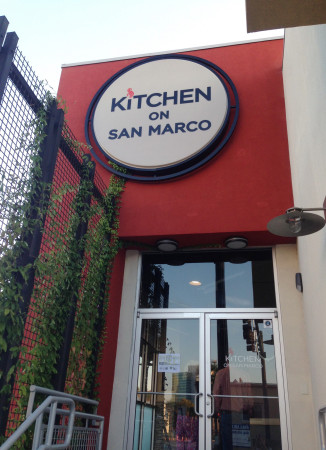 We were impressed right away by the ambiance.  The decor is clean and modern, but still inviting and full of rich, warm colors.  The hand-lettered chalkboards not only add a bit of hominess, but also some visual interest as well.  We were also impressed with the staff.  Every staff member we interacted with was incredibly friendly, engaging, and knowledgeable.  It was clear that they were not just showing up and working their shift – they all seemed genuinely interested and invested in the restaurant and in making customers feel welcome.  In fact, while we were there, we witnessed a cool interaction that really demonstrated to us how dedicated the Kitchen On San Marco staff is.  There was a family with a young child sitting near us.  The staff was friendly and accommodating with them and did not skimp on service at all.  At one point, on a trip back to the restroom, the little girl showed an interest in the kitchen (which is admittedly interesting with its open design).  The general manager, along with a couple staff members, took the time to explain a few things to the little girl and gave her the chance to peek over the counter into the kitchen.  It was great to see the staff so eager to make this culinary space accessible to someone so young and it definitely earned them some points in our book. 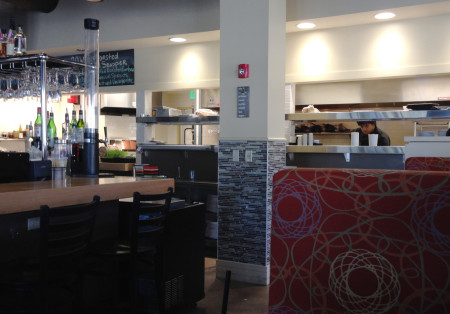 When it came time to select beverages, our server, as well as the bartender, went above and beyond to help my husband select a beer flight that he would enjoy.  This included offering samples of a couple of beers to make sure he would like them.  The beer selection at Kitchen On San Marco is pretty extensive, so the fact that they offer samples is very helpful.  Not being a huge beer drinker myself, I decided on a Bluecumber cocktail ($10), a fruity and refreshing concoction of cucumber infused blueberry vodka, violet liqueur, and lemon simple syrup.  It was subtly sweet and refreshing with no harsh alcohol taste at all.  It was dangerously delicious and the cucumber slices added a fun, spa-like touch. 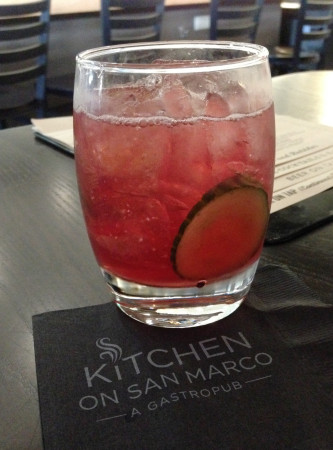 Next we turned our attention to the food.  While some gastropubs focus on burgers and offer a very limited bar snack type of menu, Kitchen On San Marco boasts a much broader and more gourmet selection.  Their menu includes a lot of appetizers and shareable plates, as well as quite a few entrees and some really unique daily specials.  Everything is locally sourced, seasonal, and prepared fresh.  We could see Chef Ryan Randolph and his staff hard at work in the kitchen, and the smells wafting over to our table were so enticing.  Luckily, our food was ready quickly and we dug right in. 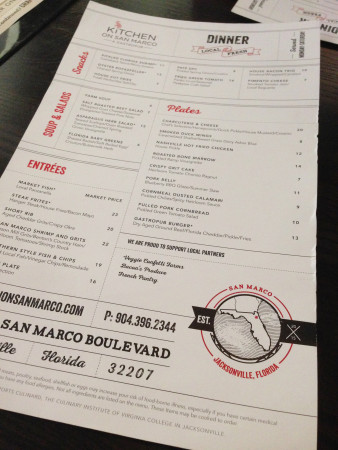 First up was the Bacon Trio ($10).  What a dish to start our meal!  The trio includes smoked bacon, candied bacon, and whipped bacon.  Let me tell you…you have not lived until you have smeared a piece of perfectly crispy crostini with creamy, spreadable bacon.  The whipped bacon was just incredible.  I was amazed at how light and airy it was.  And it had a wonderful, buttery bacon flavor that quite literally melted in your mouth.  My only complaint was that we could have used a couple more pieces of crostini to go along with our jar of bacon goodness.  The candied bacon and smoked bacon were also very good.  Since I love my bacon extra crispy, I didn’t really expect to be a fan of the smoked bacon and its chewier texture.  But the smoky, rich flavor made won me over and reminded me a little of the yummy fatback my grandma used to make for me as a kid.  The candied bacon was obviously amazing with its sweet maple flavor marrying perfectly with the salty crispy bacon.  Heavenly! 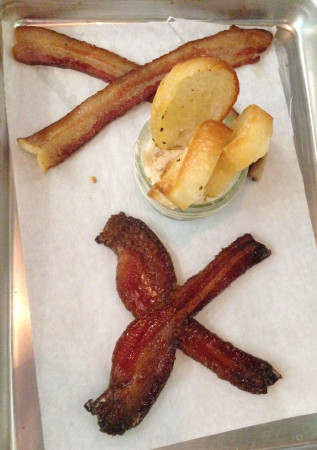 We also tried the Fried Green Tomatoes ($14).  They were beautifully plated and the grape tomatoes that garnished the plate were juicy and bursting with flavor.  But the fried green tomatoes on their own were a bit bland.  We felt like the breading could have used a little more seasoning to bring out more of that fresh tomato flavor.  And with only three tomato slices on the plate, we felt that the price was a little on the high side for this dish.  We would probably skip this one on our next visit. 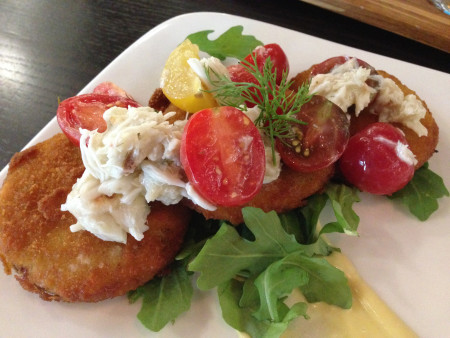 The Pickled Shrimp ($11), however, were a big hit.  Now I will warn you – if you don’t like vinegar, you probably won’t like these shrimp.  They are very vinegary, which I loved.  The shrimp had a bright, tart flavor that was great.  And the pickling gave the shrimp a unique texture.  Overall, this was a tasty and interesting dish that I would highly suggest trying at least once, especially if you’re a vinegar lover like me. 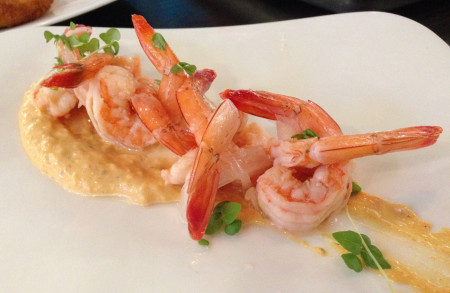 You would think after all that food we would be full, but we kept going.  There were so many things on the menu that piqued our interest.  One such dish was the Veggie Plate ($16), an ever-changing entree made up of whatever fresh vegetables are on hand.  I just had to give it a try.  And of course, we cannot pass up a good charcuterie plate, so we ordered one of those too.  The Charcuterie and Cheese Plate ($20) was one of the best we’ve had recently.  It was a great value and combined some really yummy cheese and meat selections – three of each.  Everything worked well together and it was a tasty and well-rounded cheese plate that was well worth the price.  Plus it came with more crostini for our whipped bacon! 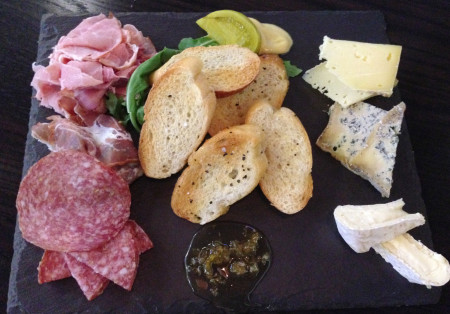 We were also impressed with the veggie plate.  On the day we went, it was made up of bok choy, okra, and tomatoes topped with a generous dollop of goat cheese and a sprinkling of toasted benne seeds.  The char on the tomatoes gave the dish a nice tangy sweetness, while the okra had a delicious smoky flavor and a bit of spice.  The seeds inside also added a nice textural pop to each bite.  The rich, creamy goat cheese tied everything together and made this an incredibly luscious and hearty vegetarian dish that pleased even this devout meat eater. 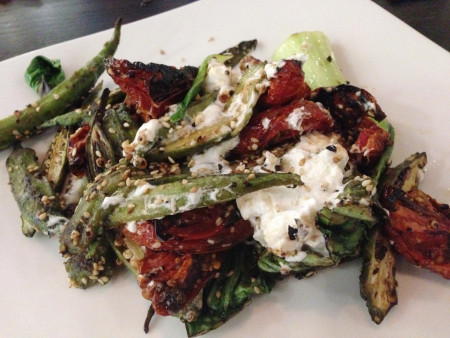 Last up was dessert.  We went for the Stacked Blondies ($8), which not only sounded delicious, but were also listed on a nearby chalkboard as being our server’s favorite dish.  Needless to say, one bite and we were pleased with our decision.  These two giant, pecan-filled blondies were crowned with a big scoop of homemade bourbon ice cream.  The blondies were not overly sweet.  They had a dark, buttery flavor and the pecans added a nice crunch, making it almost a cross between a blondie and a pecan pie.  They were easily some of the best blondies I’ve ever had.  What a perfect way to end our meal. 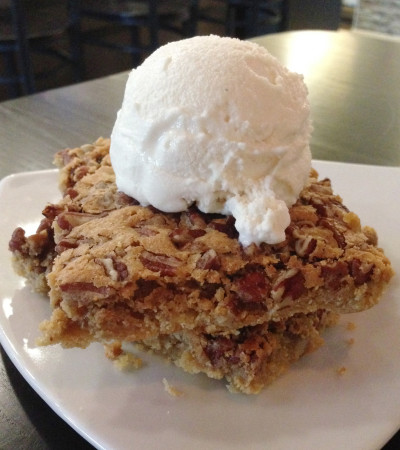 We thoroughly enjoyed our  Kitchen On San Marco experience.  The atmosphere is equal parts relaxed and upscale, and the menu reflects that as well.  Dishes are accessible, yet still unique, gourmet, and farm-to-table fresh.  And while a couple of dishes might be a little overpriced, most are very reasonable, especially given the quality of the ingredients and the gorgeous presentation.  It’s easy to see why Kitchen On San Marco has garnered several honors in the short time they have been open.  They are clearly committed to providing guests with amazing food and great service.  And they will definitely be a regular in our date night rotation from now on. 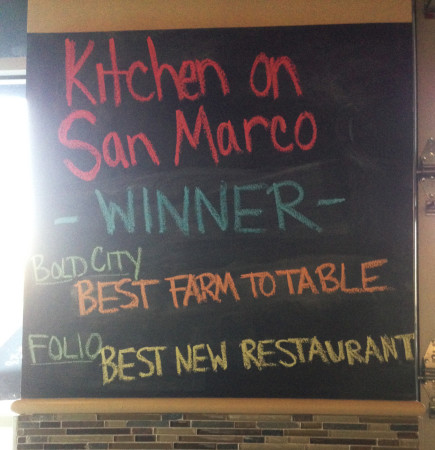 Kitchen On San Marco – One Of The Best 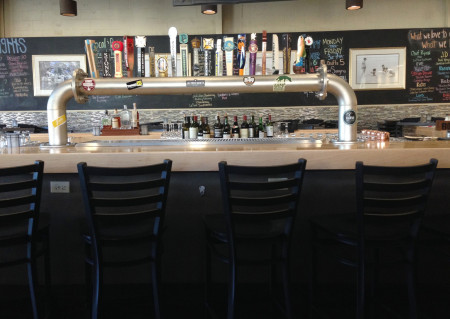 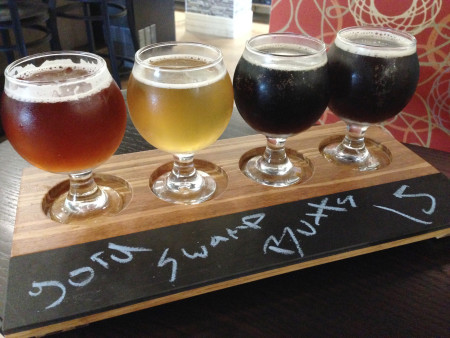