Greek food is my all time favorite cuisine.  We had a huge Greek and Lebanese community where I lived in Baton Rouge and I got spoiled on authentic Greek options.  When I moved to Jacksonville I couldn’t find a single place that met my standards.  Greek Street Cafe, recently opened on St John’s Bluff, piqued my interest with their extensive menu of traditional Greek favorites and a few options I had never tasted before.  We decided to check out what the owners call “modern Greek cuisine” to see if it finally filled the void for great Greek food in Jax.

As soon as we walked into the restaurant we were greeted by the owner, who had the most inspiring level of excitement about his restaurant.  He explained that they were creating authentic Greek cuisine and had received dozens of 5-star ratings across their social media platforms already since they had been open.  He took our drink order and let us peruse the menu.  One of the great dinner specials that Greek Street Cafe offers is the Taverna Platter, which is a “choose four” from the Meza/Tapas menu and is only $12.99.  This makes for a great light dinner or a perfect shareable appetizer.  We highly recommend going during dinner time so you can take advantage of trying a few things for a great price. We ordered several Taverna platters and a plethora of other entrees between us.  The owner asked if we wanted the food brought out tapas style (as it is prepared) or all together and we opted for tapas style delivery. 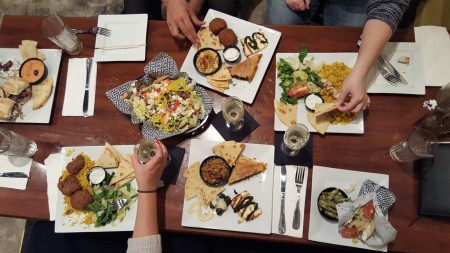 Greek Street – All The Greek Food!

Here we go; brace yourselves because we got a LOT of food.  But rest assured most of the menu has now been tasted just for our readers!  First up were our Taverna Platters, which included spanikopita (spinach pie), saganaki, melizanosalata (roasted eggplant, similar to baba ganoush), and dolmades (stuffed grape leaves) on one.  Confession: if I really love something I’m eating I spontaneously burst into tears.  Much like Meryl Streep in The Devil Wears Prada, one look at my face while I’m eating conveys my thoughts.  On my first bite of spanikopita I cried immediately.  The flaky phyllo, the lightly seasoned spinach, and the layered feta are just…breathtaking.  This is the way spinach pie should be.  All lovers of spinach, this is going to be your favorite dish ever.  Do yourself a favor and order two of them. 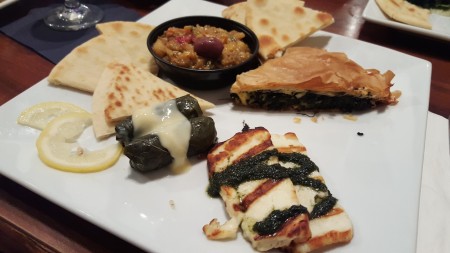 The roasted eggplant dip was a blend of eggplant, red onion, and diced tomatoes and smeared across pita made for a light flavored dip.  For eggplant lovers this dip purely showcases the mild squash-like flavor and texture of eggplant without dressing it up.  It’s simple and refreshing.  The grape leaves are made in house and are fresh!  This is such an exciting find since most places nowadays use canned or pre-prepared grape leaves, which leave diners trying to bite through mushy rice and bitter leaves.  These are heavily stuffed with perfectly tender rice and beef and lightly drizzled with a lemony sauce.  The grape leaves are tiny, about two bites per wrap, so this makes for a good appetizer but isn’t necessarily shareable.  Finally on this platter was the saganaki.  This was the only thing throughout the meal that we didn’t love.  When we asked the owner about the saganaki he explained that this was Greek Street Cafe’s spin on the traditional dish.  Usually saganaki arrives at the table in a small frying pan and served either bubbling hot or flaming (the flaming is an American tradition, not a Greek tradition) prior to eating it.  This was served chargrilled and topped with mint pesto.  The chargrilling of the cheese left it dry and difficult to bite through.  It became very rubbery.  I’d skip this tapa in the future.

On our second Taverna Platter we tried the Gyro Sliders and the Greek Street Spread.  The Gyro Sliders are perfect for a smaller portion of the entree gyro (discussed in detail in the next paragraph) and capture the flavors of the larger more filling gyro perfectly.  The Greek Street Spread is also pretty special.  This is a signature menu item that blends together feta and roasted red pepper to create an addictive spicy and creamy cheese dip.  Save your pita slices for this, you’ll be scraping every bite out of the bowl. 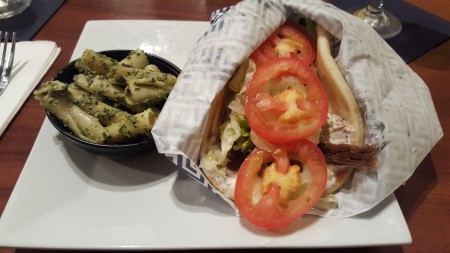 Onto the entrees.  First up was the Gyro Pita ($7.99) served with a side of Greek pasta salad.  Greek Street’s gyro meat is a blend of roasted lamb and beef on a spit (as it should be) and shaved off into the soft pita.  The meat is shaved paper thin and absolutely melts in your mouth with each bite.  It is topped with fresh sliced tomato, shredded lettuce, thinly sliced onions, parsley, and the most divine homemade tzatziki sauce that is tangy and creamy.  Hands down, this is the best gyro I’ve had in years.  Greek food is not generally heavily seasoned and this is a great example.  Simple flavors meld together to make one incredible sandwich.  The side Greek pasta salad was also fairly basic, penne pasta dressed in herbs and olive oil.  Once I added a little salt it was a perfect accompaniment to the pita sandwich.  The Greek Nachos ($8.99) were a delightful discovery on the menu as well. nThis would make an excellent appetizer to split among a few people or a shared entree for two.  A hearty portion of toasted pita chips are absolutely covered in shaved gyro meat, feta, lettuce, banana peppers, onions, and Greek Street Sauce (which is reminiscent of the aforementioned Greek Street Spread).  This was one of the shining highlights of our meal, all five of us kept grabbing more out of the huge basket. 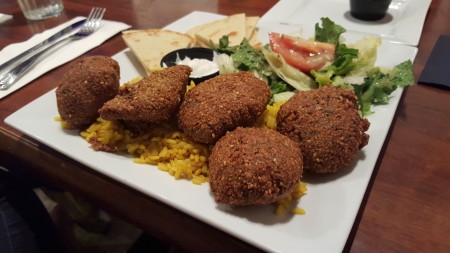 Entree number three was a Falafel Platter ($12.99) served on a bed of Greek rice with side items of pita and tzatziki and a marouli salad.  Falafel are vegetarian seasoned ground chick peas rolled into balls and deep fried.  First off, these falafel were huge.  They don’t play around at Greek Street.  They were also immaculately crispy on the outside and tender on the inside.  This is excellent falafel – some of the best in town.  The Greek rice is lightly seasoned rice that was al dente, and the marouli salad was basically a toned down Greek salad with a few less ingredients.  Both side items were delicious and went well with the falafel.  The falafel dipped into the tzatziki sauce is basically what heaven is made of, so don’t go crazy using it only on the provided pita. 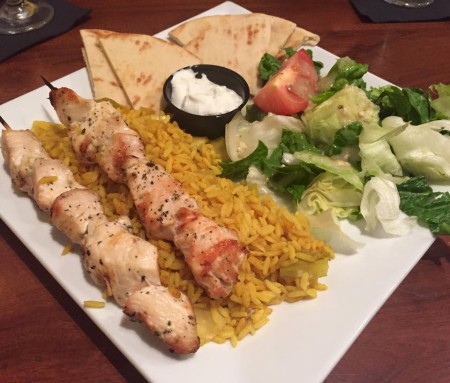 The last entree was the Chicken Platter ($13.99) which had two generous skewers of grilled chicken marinated in lemon, olive oil, and seasonings and accompanied by the same side items as the Falafel Platter.  The chargrilled chicken was fork tender and cut into bite sized chunks in order to be easily removed from the skewers.  The lemon flavor shone through the olive oil and seasonings and made for a distinct taste that highlights just naturally, well cooked chicken.  No need for fuss, this is just good food done right.  Again, dipping the chicken in the tzatziki is where it’s at. 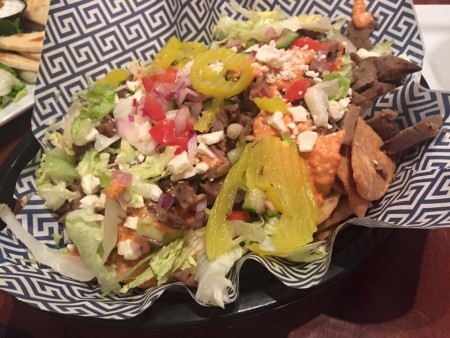 Greek Street Cafe has earned a place on my favorite restaurants in Jacksonville list.  The food is prepared with love.  Every ingredient is fresh – the yogurt for the tzatziki is even made in house.  They’re bringing unique and authentic flavors to Jacksonville that didn’t exist prior to their opening.  The customer service is superior, the ambiance is inviting, and the food is ethereal.  If you try one new restaurant soon, Greek Street Cafe should be the one.