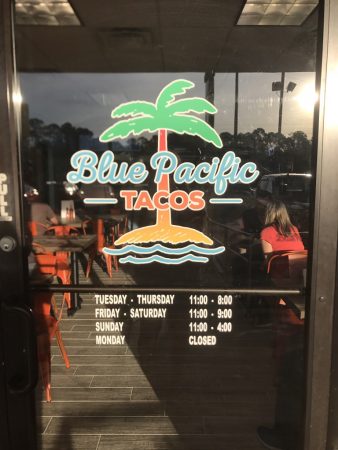 The store is light and vaguely tropical in decor. While the interior is somewhat utilitarian in arrangement it is also bright and comfortable. Every counter and table serves a purpose with nothing cluttering the space. Nothing is overdone, but each part is thought out- the the nostalgic Pacific postcards decorating the wall, the wood bar, the screens displaying the menu. It might feel small if it wasn’t for the patio on the side with awnings shading the tables, and string lights and jasmine giving a cozy, neighborhood feel.

The menu at Blue Pacific Grill & Taco Bar will be familiar if you are a fan of Blue Pacific Tacos food truck. It’s straightforward, which has always been part of the Blue Pacific  charm. A handful of appetizers are offered including nachos, chips and guacamole, lumpia, and coconut shrimp. There are a smattering of tacos- all $5 each- including a ground beef taco, a mojo chicken taco, the very popular bang bang shrimp taco, a Baja fish taco, a pork taco, and a black bean and veggie taco. The sides offered are a small salad, french fries, and the like. A children’s menu is also available. You can make any two tacos into a meal which includes a side for $11.50. Maybe $5 sounds like a lot for a taco, but these are not your average tacos. They’re HUGE! They are so stuffed with goodness you get your money’s worth and then some. 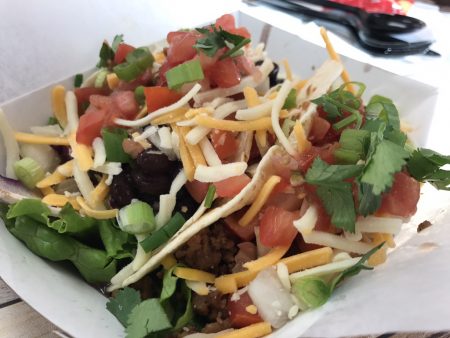 On our visit we tried the nachos, the beef taco, the bang bang shrimp taco, the pork taco, and the black bean and veggie taco. Let’s go from “Okay” to “Oh Yeah”. I ordered the black bean and veggie taco because I was chasing a healthier choice. Silly, silly food writer. The black bean and veggie was not a bad taco, it just wasn’t the healthy-ish taco I was expecting. It had no more additional veggies than any of our other tacos, it just had black beans instead of meat. Which is fine. But I was expecting veggies besides lettuce and tomato–though those were plentiful. It also had ranch on it. It tasted pretty good, but if I’m going to eat something unhealthy I’m going to want it fried, not ranched. If I had known that ahead of time I would have made a different choice but it wasn’t listed on the menu board. A step up from the black bean and veggie taco was the beef taco. It was a pretty straightforward ground beef taco. It was good and there was plenty of it, it just pales in comparison to the next two tacos. The other two tacos were amazing and we disagreed on which one was best so it is essentially a tie. But the good thing is you can order both! The pork taco had amazing flavor. It had some zingy sauce and crunchy fried onion bits that completed the flavor profile. We were impressed with this taco and would definitely order it again. The final taco was the bang bang shrimp taco. SO. MUCH. SHRIMP! There were more shrimp in this taco than your last po’boy, I guarantee it. And it’s not just stuffed with shrimp, it’s an absolutely delicious taco. A different zingy sauce gave this one some depth and moisture. I would eat this again. 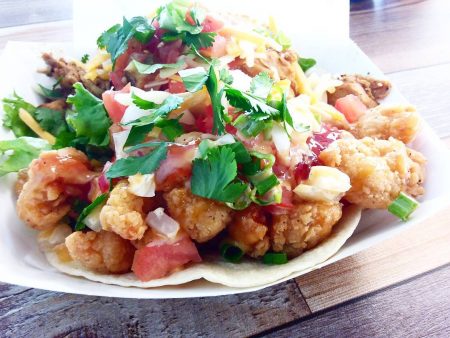 The nachos can be ordered with or without beef. Ours were without. It was another straightforward dish with chips covered in white queso topped with pico. There was plenty of cheese to get through the chips and even enough left to scrape what was left off the bottom with a few fries. Fries and cheese dip are never a mistake.

Truthfully, we had to resort to forks to eat our tacos after much of my black bean taco fell out onto my lap. The tacos were just so stuffed it was hard to manage with hands alone. While Blue Pacific Taco fans are familiar with the mess a Blue Pacific Taco makes at a food truck rally, where you do not have the benefit of sitting at a table, new diners should be prepared to get all up in there to enjoy their tacos. 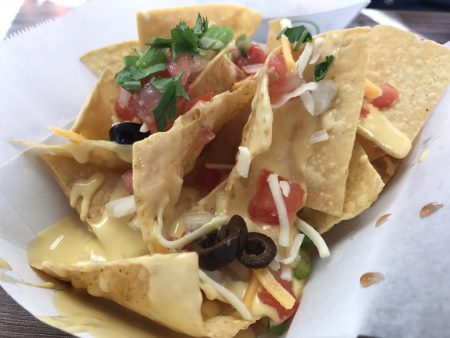 In addition to the taco menu, Blue Pacific Grill & Taco Bar also has craft beer and some legit wines. They also have specials on their beer and wine such as Wine Down Wednesday and Thirsty Thursday. Ladies night, anyone?

All in all, Blue Pacific Taco’s new brick and mortar store is more than the realization of a dream. It’s the next step in the Blue Pacific Taco world domination plan. At least that’s what we have to assume with tacos bigger than your stomach that we can now get anytime. 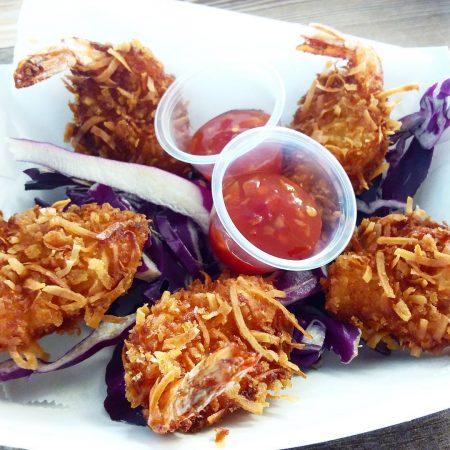 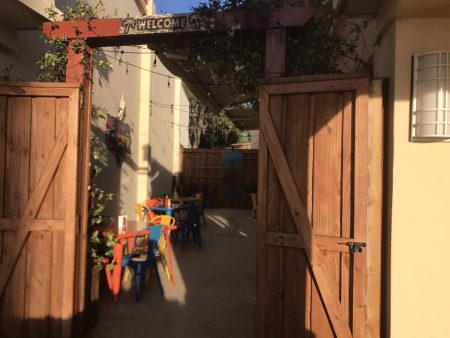