There is a lot to be said about growing up understanding the vision and purpose of farming, nurturing, and harvesting and transferring that knowledge to the kitchen. Each food item brought to life by your hands serves a purpose. Chef Ryan Randolph of Kitchen on San Marco was simply designed for this restaurant. For those who haven’t dined at Kitchen on San Marco before, the menu is seasonally focused and locally sourced from a variety of people who spend their lives exactly how Chef Ryan began his–on a farm. 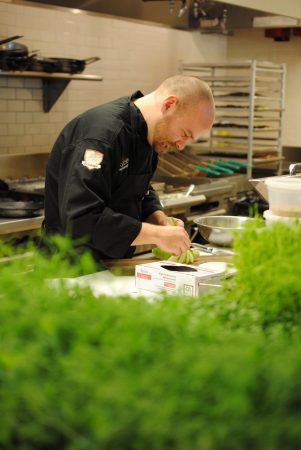 “Cooking was something that growing up I was always around. I grew up on a farm in Sweetwater, Tennessee, which is a small town in southeast Tennessee. There wasn’t a lot of going out to eat, that was a rare treat. My mom or my dad cooking at the house, on the other hand, was something that was there. I got curious as I got older and wanted to try my hand at cooking. I started off young doing that and as I went through high school and college, like a lot of kids, I needed a job. Working in a kitchen fit with the after-hours of school. Then, I kept going with it and fell in love.” You can see Chef Ryan’s Tennessee farmland childhood woven throughout his menu at Kitchen on San Marco. For appetizers, a true southern Pimento Cheese with Tomato Jam sits beside a Boiled Peanut Hummus and Grit Fries. Each classic and comforting flavor is elevated with elegant plating and the mark of a fine dining chef. The knowledge of the origin, growth, and flavor profile of each item comes from a literal lifetime of experience, and that knowledge can’t be highlighted enough.

Once Chef Ryan began college, he realized that he wanted to commit himself to cooking and nothing else. He made a life changing decision and moved to Houston to go to the Art Institute of Houston for culinary school. Houston was a rather arbitrary locale, Chef Ryan and a friend were ready to move somewhere and he wanted to go to Charleston and she wanted to go to Houston. “I lost that battle,” he chuckled, “But Houston was fun, there were a lot of great experiences there and a lot of cultural differences. So many more aspects and styles of food were opened up to me.” Following his graduation, he moved back to East Tennessee where the “passion and connection between food and people” originated for him. His parents were a direct influence behind that, supporting him in wherever passion took him. A visit with friends led Chef Ryan to Chattanooga where he stopped in to visit some friends and met a chef who was opening a second restaurant and had just come off a James Beard nomination for the Southeast region. That chef is Chef Daniel Lindley, by far one of the most revered chefs in Tennessee but a common name in any chef related conversations in the South. After the conversation, Chef Ryan decided to stay in Chattanooga. Chef Daniel is the creator behind Alleia and 5th and Taylor, featuring rustic Italian and classically elevated southern-American fare which certainly reflects notes of Kitchen on San Marco’s current atmosphere and menu. Chef Ryan absorbed it all, saying “I stayed there for a couple of years and worked back and forth for three years trying to soak up as much knowledge as I could. After that I worked for a hotel and privately owned restaurants. In January of 2015, Eve (the opening and current general manager for Kitchen on San Marco) who is from Chattanooga , asked for my resume. I had no thought of leaving Chattanooga and no plans involving Jacksonville. After a month of talking I came down and fell in love with it. From not having Jacksonville on my radar at all, it’s been a great change that I love.” 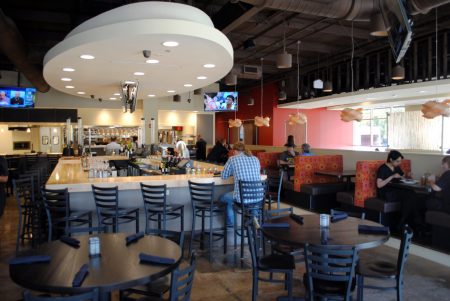 There was an instant and unexpected appeal for Jacksonville to Chef Ryan. He told us, “I really saw a community that food wise was on the verge of getting into the scene. People are getting into where our food comes from, people were making sure they were buying locally. Plus, for a large city you have a close community where people introduce you to one another. Before we opened I had different farmers coming in saying ‘so and so told me about you’. We’re very supportive of one another.” However, this was not the farming community that he was used to growing up. “One struggle at first was that in East Tennessee we had the privilege of small young farmers getting into business. We’d have 40-50 farmers we dealt with on a daily basis. But, our seasons are so different here and not many of the younger generation are getting into farming like I’ve seen in other areas. I didn’t think about losing the entire summer’s worth of product because of the heat here. I was dying because I couldn’t get a good tomato. We had gorgeous heirloom tomatoes back home. Everything down here was dead or greenhouse grown. Now I just plant my own tomatoes and take care of them.”

The juxtaposition of the neighborhood staple Kitchen on San Marco to his previous job proved to be a worthwhile leap. The boutique hotel had almost 400 rooms which he described as “400 kids who never sleep.” It was ongoing 24 hours a day and overwhelming. His energy was revitalized coming to Jacksonville in February of 2015 with an opening date of April 1st for Kitchen. With six weeks to get everything organized and ready to go, Chef Ryan kicked into overdrive with meetings with staff, purveyors, and farmers. Eve, Dale, and Chef Ryan have been together and operating Kitchen since before Day One and that teamwork has led to a lasting success.

The formula for success is hinged heavily on Chef Ryan’s intricate and revolving menus. When we asked him what advice to give to new customers, he said “Definitely come in expecting to find an ever-changing menu. We are trying to showcase as much locally as we can. We change our menu four times a year and run features nightly for lunch and dinner. We have a great bar program. We have twenty beers on draft, over half of which are Florida beers. There are such great distilleries that we are trying to work with now. Overall, it’s a fun casual environment to be an ‘every day of the week’ spot to visit.” One signature item that has been a staple since the beginning are the Instagrammable and delectable whole roasted fish entrees that Chef Ryan makes. At the time of the interview, Chef Ryan lightly seasoned the fish with Congaree and Penn rice flour accompanied with asparagus, radishes, and raw beets as a shaved salad. He also gave us a preview of the new menu, telling us “On the Spring menu we will be doing the Chef’s Cut which will be different cuts of steak. It’s an opportunity to introduce people to something they aren’t familiar with, there are more options than a filet and a strip! We want to be doing sustainable cooking and eating, so alternative cuts are an option we can use. Our octopus will also be on the menu, that will be a highlight for spring and summer.” 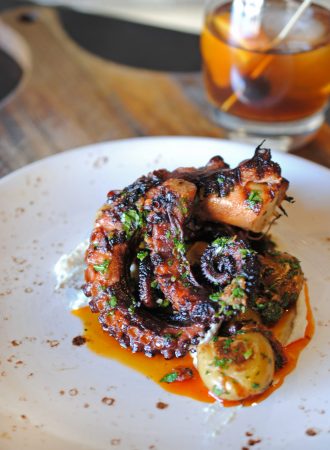 When it comes to Chef Ryan’s preferences on his own favorites, he is easily swayed by ordering octopus on any menu as it’s one of his favorite dishes. He also has a weakness for “pork based” things, particularly Benton’s country ham and bacon. Nostalgia carries through as he grew up eating it in Tennessee, however it’s not without merit as they recently won a James Beard lifetime achievement award for their contributions to bacon in our industry. That’s a contribution we believe in! Simplicity rules with Chef Ryan though, as he also loves a sliced salted and peppered heirloom tomato (now that he can tend his own that is).

The elegance of simplicity extends far beyond his love of heirloom tomatoes though and carries through each menu item equally. From a Farm Salad featuring local lettuce, tomato, and a soft boiled egg to San Marco Shrimp and Grits with sinfully creamy Anson Mills grits, the South and the Southern man prevail in the recipes. Jacksonville and its subsidiaries strongly prevail with items from Congaree and Penn, Veggie Confetti Farm, French Pantry, Urban Folk, and Frog Song farms to name a few. These freshly sourced items don’t just taste better, they support our community and a sustainable Jacksonville. Without chefs like Chef Ryan, that community wouldn’t be growing. You wouldn’t see twenty farms at RAM every week or see them featured in nearly every dish at Kitchen on San Marco. Not only is Chef Ryan the driving force behind our soul warming comfort food that we can enjoy at Kitchen on San Marco, he’s also the driving force behind a culinary overhaul in the Jacksonville community to eat locally. And that’s a force we can get behind. 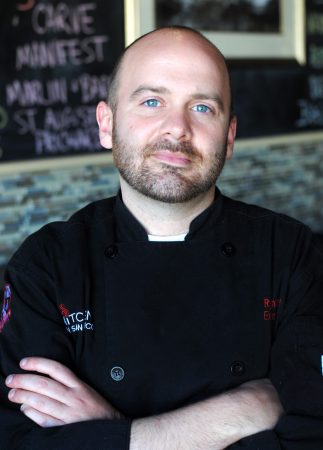 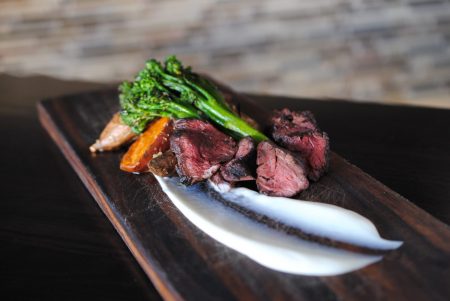 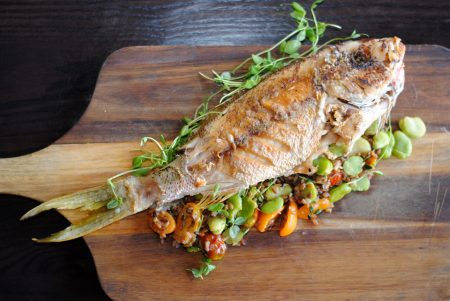 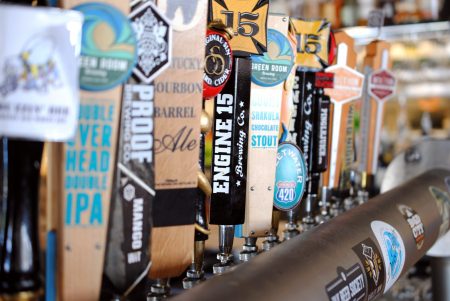