The Yum Yum Tree on St. Augustine Road has had quite the staying power with nearly 40 years in business serving what is touted to be the best chicken salad in Jacksonville. We were invited out for lunch the other day to try out their traditional southern fare.   The Yum Yum Tree is only open for table seating from 11-2:30 but they also serve take out from 9:30-2:45 Monday through Saturday.   We were greeted immediately when we arrived and seated at one of their bright patterned tables in the back of the restaurant. It is evident the restaurant hasn’t been redecorated in a few decades, but that adds to its southern charm. The whole time we were there I kept imagining the cast of Steel Magnolia’s filming scenes here. 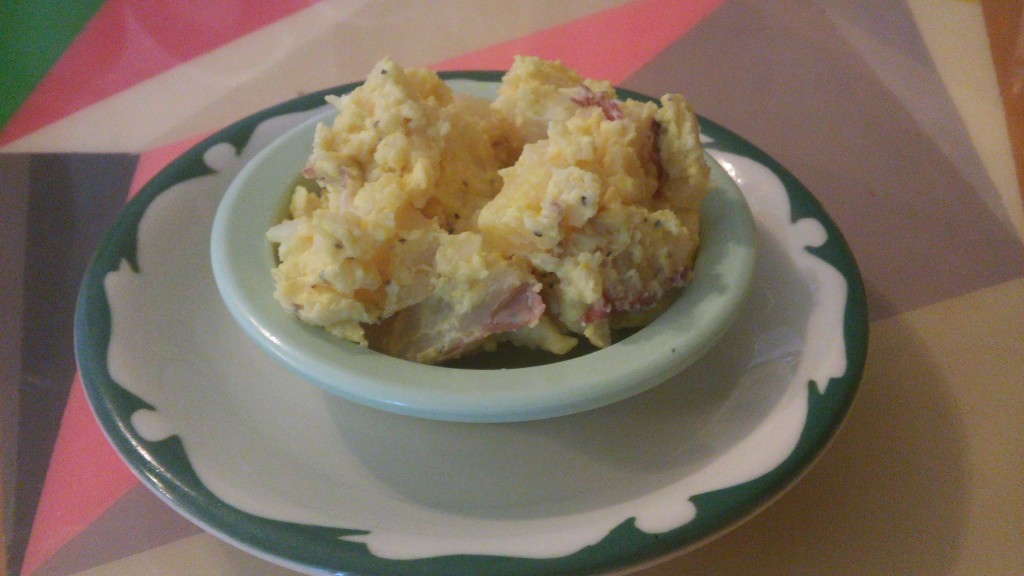 The menu itself is very limited. The Yum Yum Tree has been serving the same rotation of food for years. There are sandwiches, salads, quiches, and crepes.   It makes for pretty easy decision making on ordering. Our server recommended that she bring us the chicken salad, which is their famous offering, an asparagus crepe, a house salad, and potato salad.   While we waited on our entrees she brought us crackers and a whipped cheese spread that reminded me of the handi-snacks from the 90s. Our lunch arrived less than 5 minutes later so this would be a good option for folks who have limited lunch breaks. 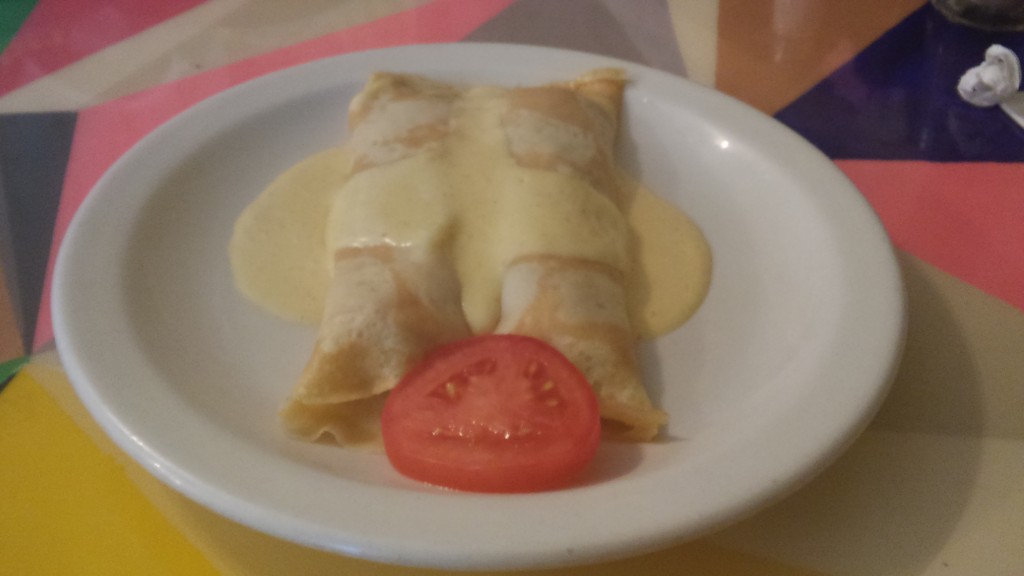 We tried the chicken salad ($8) first since that is their signature dish.   The cold chicken salad is served in a large scoop on a bed of lettuce with a cucumber on top and a sliced cherry tomato. Traditionalist chicken salad lovers will probably be very happy with it. The chicken salad has large chunks of white meat chicken simply dressed in just mayonnaise and also lightly peppered with a few slices of celery. To me the chicken salad was simple. The chicken itself was the star and not over-prepared. Though we could see the pepper in the mayonnaise, neither one of us felt it was heavy handed.  If you like a traditional, no-frills chicken salad, you’ll probable be a fan of Yum Yum Cafe’s take. 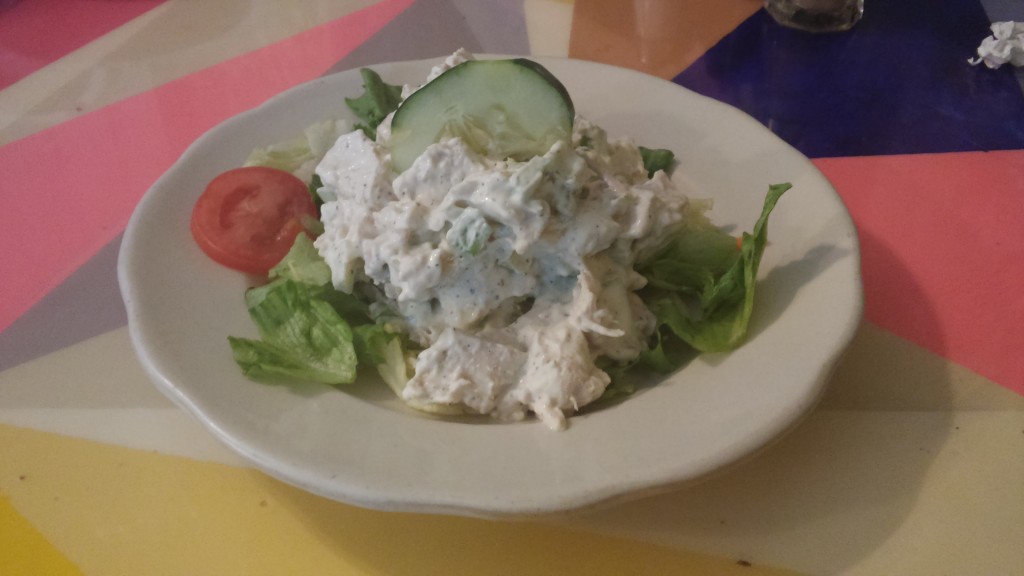 Our second entrée was the asparagus crepe ($8).   The crepe was wrapped around asparagus, ham, and cheese and smothered with a spicy hollandaise. This, unlike the chicken salad, was very flavorful. The asparagus inside was the most tender asparagus I’ve had recently. No knife was required to cut through it, the side of a fork did the job fine. The crepe tasted fresh and wasn’t chewy like a lot of premade crepes are.   The hollandaise sauce was heavy with cayenne pepper. We loved it.   Our server actually said it was a little spicier than normal that day but I thought it was perfect. The spicy cayenne compared to the mild asparagus had a great balance.   The ham and cheese inside the crepe was unremarkable, I couldn’t really even taste what type of cheese it was but that was irrelevant because the asparagus was so good. This would be a dish I would go back to order, especially since it’s rare to see crepes on menus around Jacksonville. 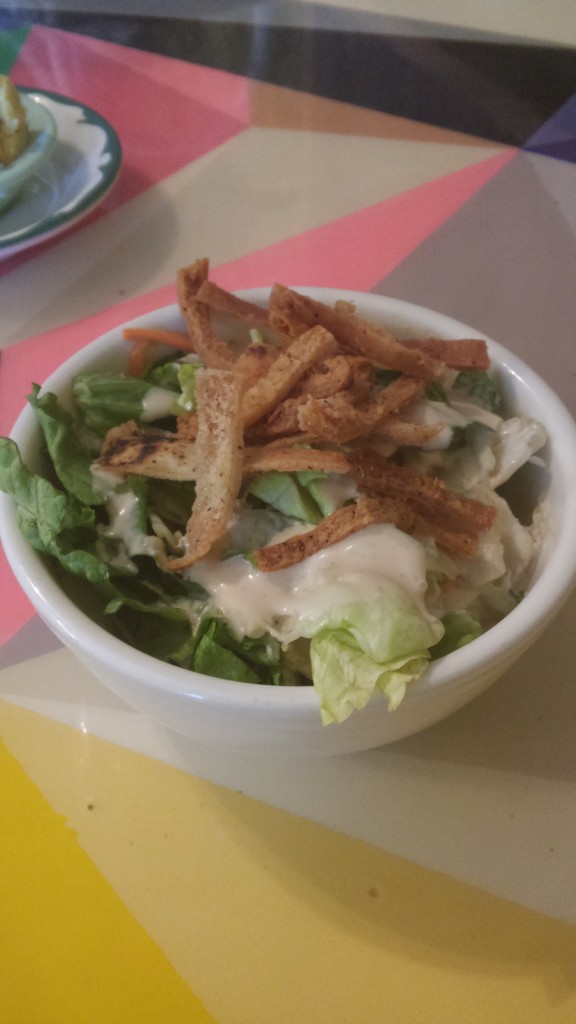 Our entrees each came with a side item included in the price of the entrée.   The house side salad was pretty basic. It came with romaine lettuce, shredded carrot, and sliced tomatoes. There were homemade crouton strips on top that seemed to be made from bread crusts that were crispy and salty.   The tangy house dressing that comes with the salad was really close to the consistency and flavor of Big Mac sauce from McDonald’s, which threw us for a loop.   Like the chicken salad, the house salad was neither good nor bad, it was basically just a filler. The potato salad was our second side item. Yum Yum Tree makes their potato salad heavily mustard based, there may not be any mayonnaise at all in it. We really liked that it was made with red potatoes, the stronger flavored red potato held up well with the the mustard. I think milder flavored potatoes would have been overpowered. The skins were also included in the potato salad so there was some extra texture added into the chunky potatoes. The potatoes were still really firm and not mashed down so it made for a hearty side dish. 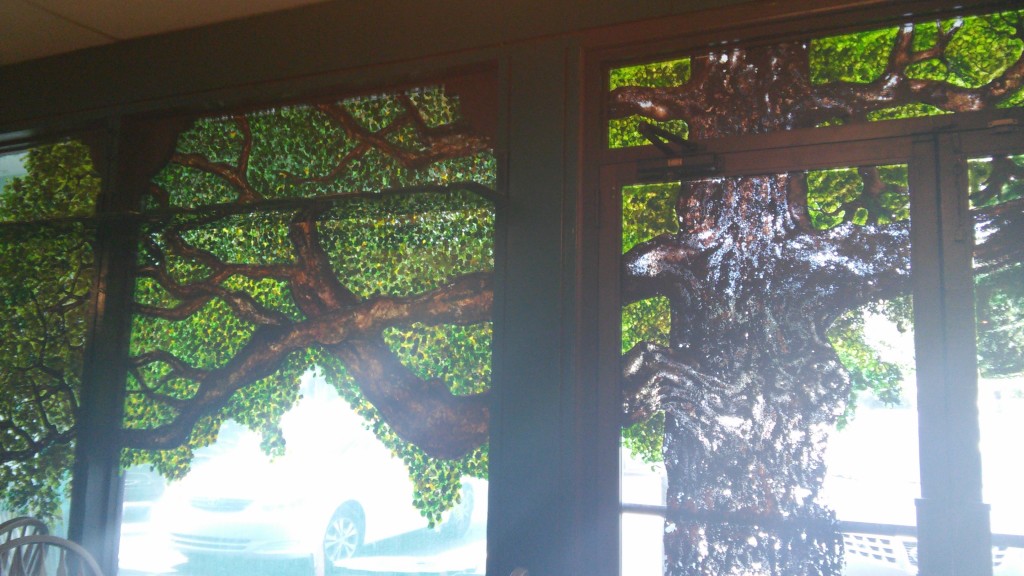 When our server came to check on us she recommended that we save room because she was bringing us their most popular dessert, coconut pie ($3.50/slice, $12 pie).   I’m not a huge sweets fan, but this dessert may have converted me.   The pie is served hot and tastes like traditional southern chess squares with coconut added.   It took me back to church potlucks in Mississippi—this pie is a great representation of decadent southern recipes.   Basically the filling is sweetened butter, and you cannot go wrong with a pie made out of that much butter. Trust me. It was creamy in the middle and covered in browned flaky coconut on top. It was topped with cold whipped cream, which may have been cool whip, we weren’t sure. The cold whipped cream on the hot pie was the perfect combination. Needless to say, we scraped the plates on this dessert.     I’d return to Yum Yum Tree just for this treat. 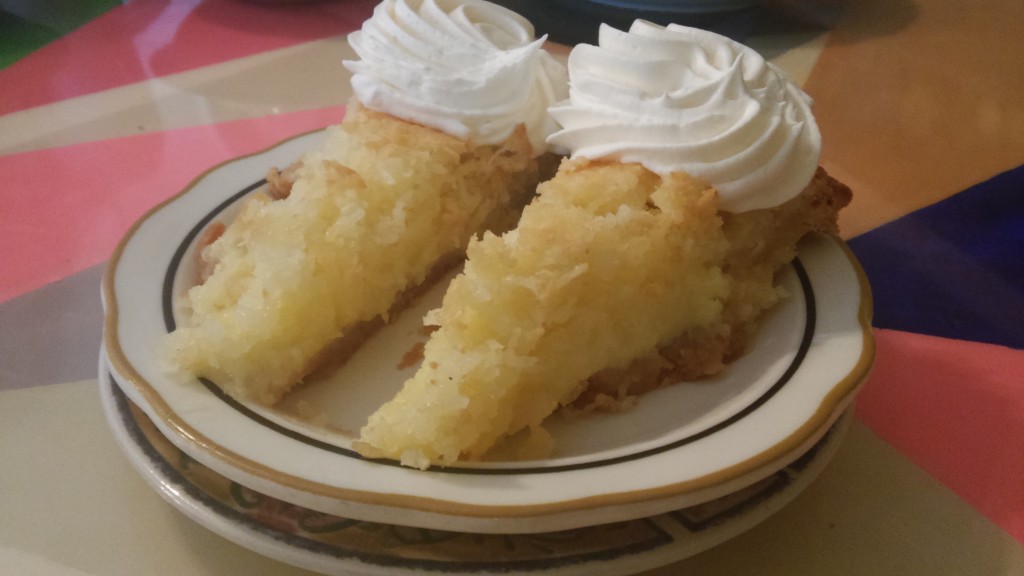 If you like simple, homecooked food then the Yum Yum Tree is for you.   There is no flair to the recipes, they just use a few ingredients in each dish.   It makes for a very quick and affordable lunch for those on the go.   All in all, expect to feel like you’re having a casual lunch in someone’s home, you’ll be treated like part of the family at Yum Yum Tree.