Smallcakes was founded by Jeff Martin in 2008 in Overland Park, Kansas.  After appearing on the Food Network show Cupcake Wars, Jeff’s cupcakes were in high demand all over the place.  And since then, Smallcakes has started franchising and expanding all across the country.  Right now, Smallcakes locations can be found in 17 states as well as internationally.  And now we have one too!!!  Our Jacksonville Smallcakes location opened this past December.  I finally got a chance to stop in the other day and I was pleasantly surprised.  Typically we prefer small homegrown local business and don’t really gravitate towards chain eateries.  But Smallcakes is a definite exception.  It’s a chain that still retains a lot of charm and some really, really good cupcakes.  We will definitely be gravitating back to it soon! 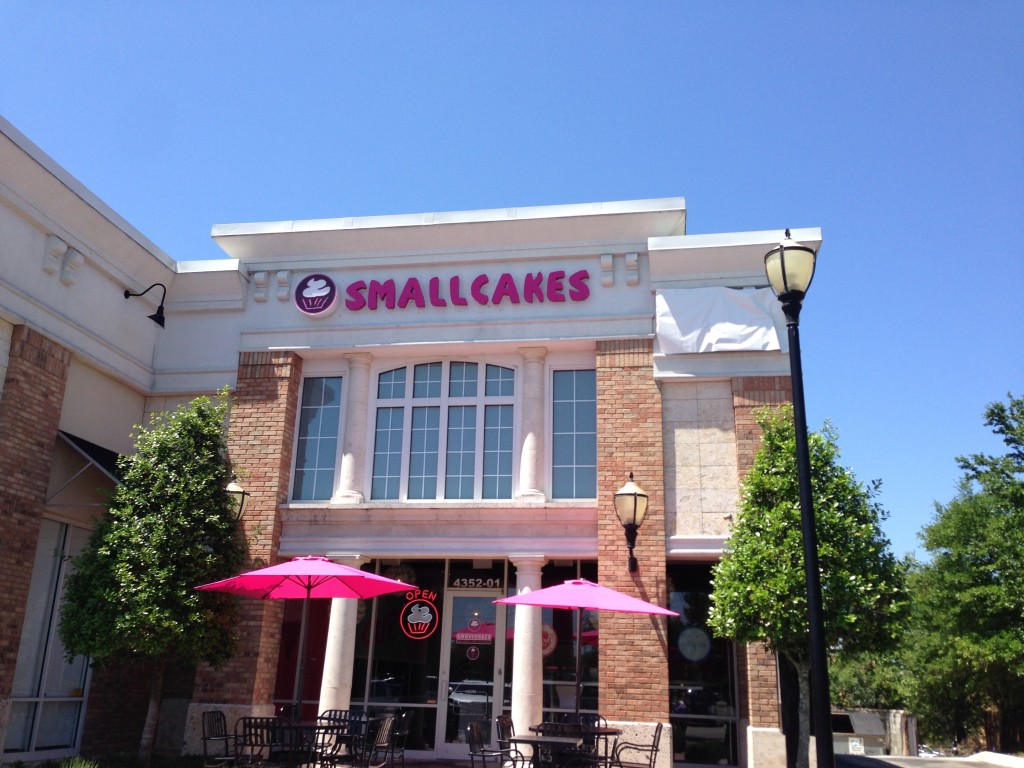 I walked in and saw the Smallcakes slogan “Maybe a cupcake will help?” emblazoned across the wall and I knew right away I would like this place.  I was greeted and the nice lady working there explained what their cupcake offerings were for the day.  She explained that they have quite a few flavors that they make on a regular basis and then a few more seasonal and special edition flavors that they have in rotation.  Everything is made right there on the spot and you could tell…it smelled heavenly in there.  Honestly, I wanted to try all the flavors.  They all looked delicious.  And the presentation and the way the cupcakes were displayed made them look even more appealing.  The counter area is just packed with cupcakes.  Each flavor is displayed right at eye-level on pretty little cake stands.  I was told that the Strawberry and Wedding Cake flavors were their most popular.  I had also heard yummy things about their Maple Bacon and Stuffed French Toast cupcakes.  But, I was in the mood for chocolate, so I chose a Choco-holic cupcake. 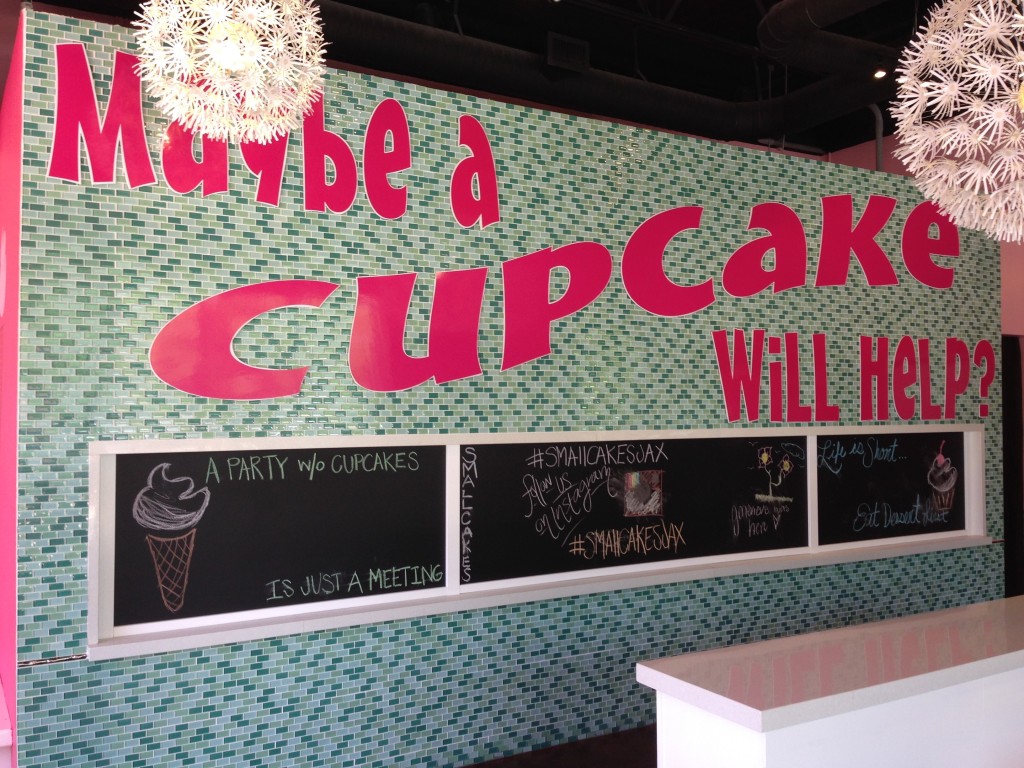 I’ve been chocolate lover for as long as I can remember and I’ve had a lot of chocolate goodies in my lifetime.  This cupcake ranked very close to the top of my list.  It was dense, moist cake with a dark, rich chocolate flavor.  I loved that the cake was not overly sweet.  And it was a great backdrop for the frosting.  Oh my goodness…the frosting.  Too often, you’ll  have cake where the frosting is just ok….where it’s just too sweet, or the consistency is grainy, or it there’s just way too much of it.  This was not the case with my Smallcakes cupcake.  The chocolate frosting on the cupcake was just as much the star as the cake itself was.  The frosting was rich and perfectly creamy.  And the frosting to cake ratio was spot on.  In fact the whole cupcake was just great.  And I loved that it was big, but not so huge that you can’t polish it off yourself in one sitting.  Because that’s exactly what I did.  And at only $3.25 I felt like I got a pretty good deal. 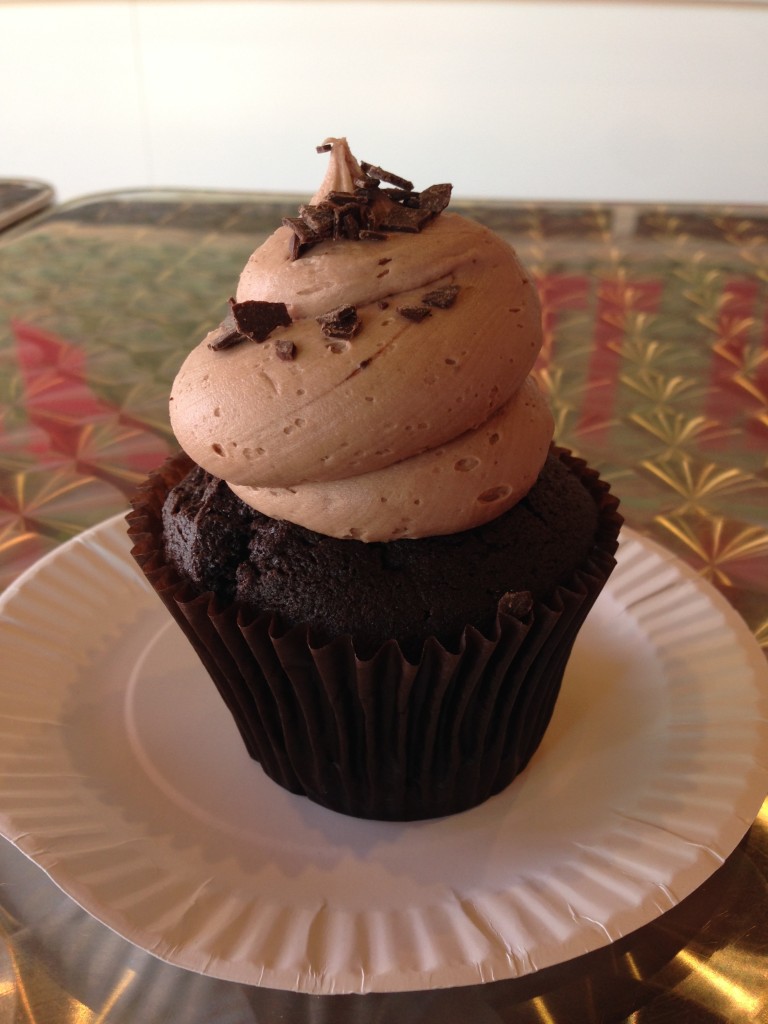 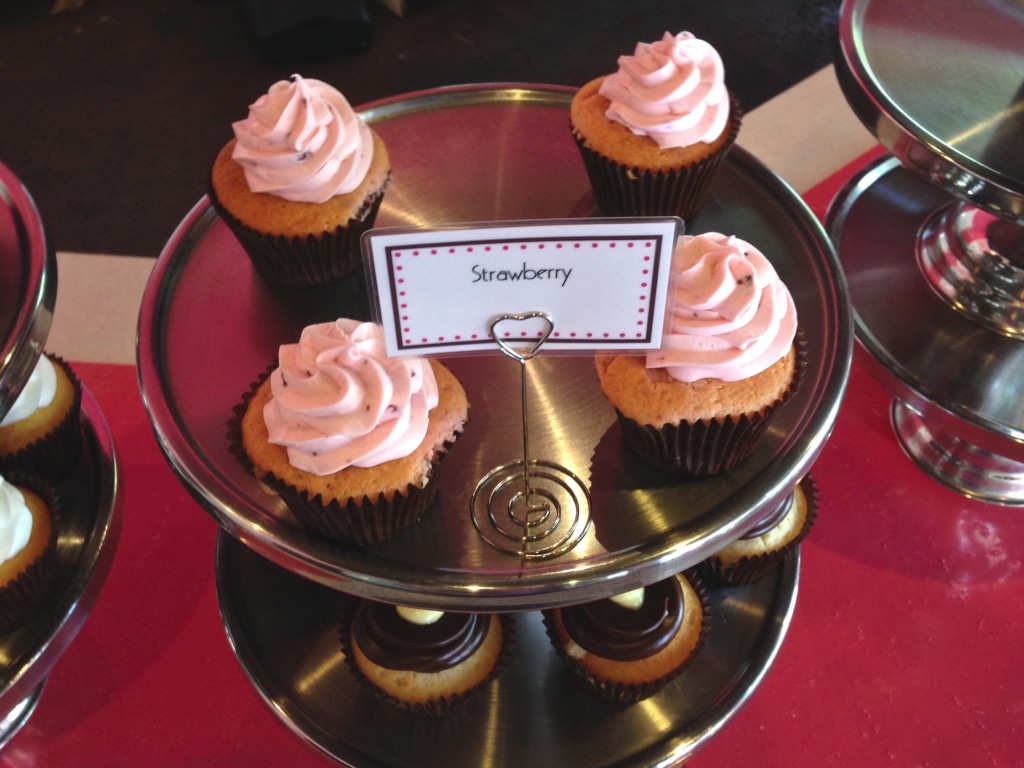 Even though I was stuffed from my cupcake, I couldn’t pass up the chance to also try some yummy ice cream.  That’s right, they also serve delicious cupcake-flavored ice cream, made right there in-house.  I tried the 24 Karrot flavor, which was reminiscent of carrot cake.  The ice cream was smooth and light and delicious.  And with other flavors like Chocolate Chip, Vanilla Bean, and Red Velvet, I can’t wait to go back and try some more.  Ice cream is a new addition to the Smallcakes family and my guess is that it will become just as popular as their cupcakes are. 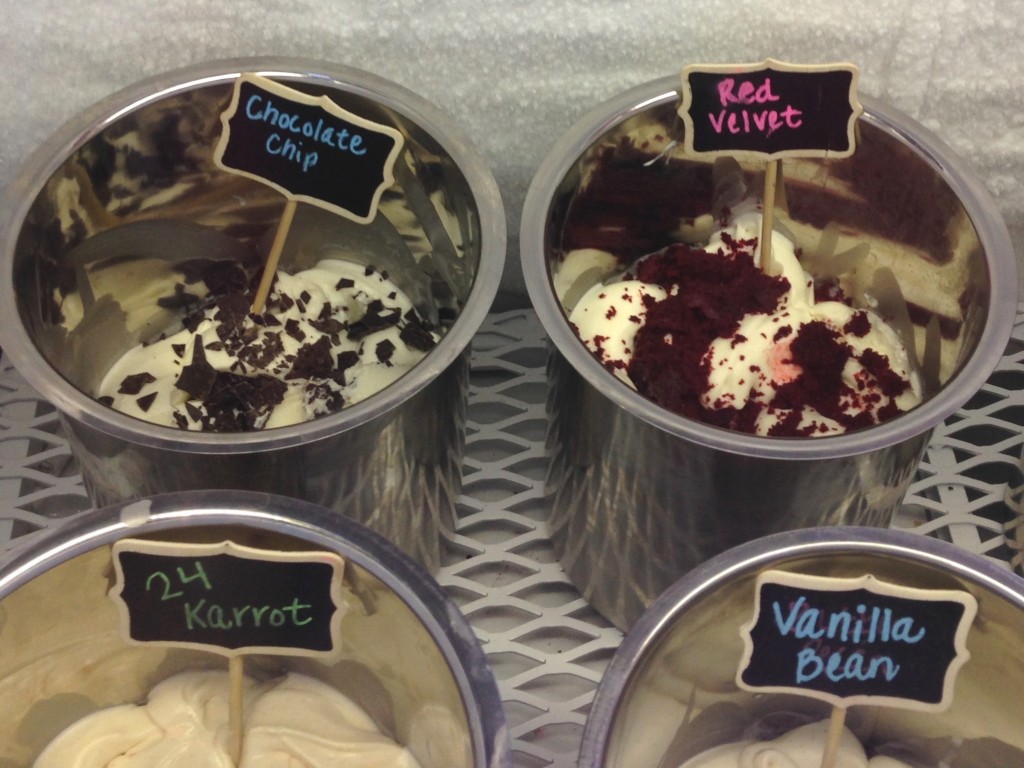 Overall, I loved Smallcakes.  My only gripe (and really more of an observation than a gripe, to be honest) was that it seems like they might still have some kinks to work out in the store itself.  They just opened the Jacksonville location in December and you can sorta tell.  The interior is a little stark and empty…almost like they literally just moved in.  There’s very little decor and the furnishings are super-modern.  While the greeting that we received when we came in was warm and welcoming, the store itself felt a little cold and just didn’t have a lot of “personality” to it.  Along the same lines, something else that was noticeably missing was a menu board.  While the cupcakes were clearly labeled and displayed prominently, it would have been great to see a menu with a little more information on the flavors and listing any current or upcoming special flavors.  Instead, I asked if they had a paper menu I could take with me (to plan which flavors I wanted to try on my next visit, of course) and was told that they didn’t have those either.  Bummer. 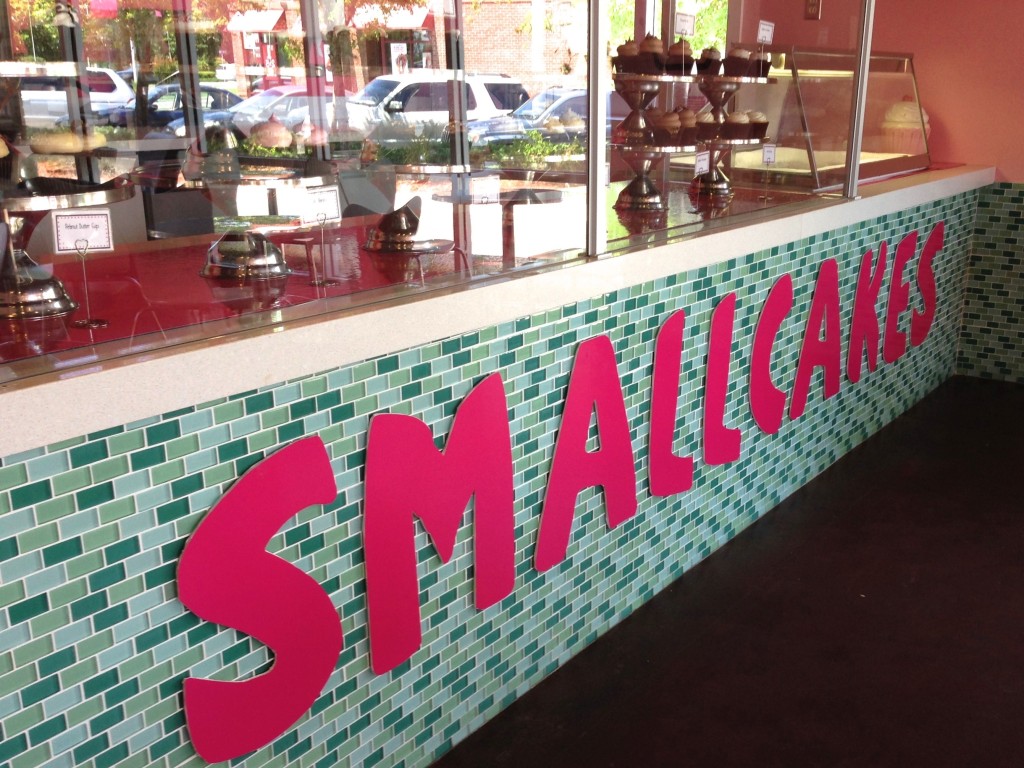 It seems like Smallcakes Jacksonville still has some logistical stuff to work out.  But they definitely have the most important part down pat…delicious gourmet cupcakes.  There are already a few really good cupcake places in Jacksonville.  As cupcake connesours, we truly believe that one can never have too many options for yummy baked goods.  The Jacksonville cupcake landscape just got a lot tastier with the addition of Smallcakes and we cannot wait to go back and try some other flavors.  As for me, I’ll just keep stalking their Facebook page to find out when I can get my hands on one of those Maple Bacon cupcakes. 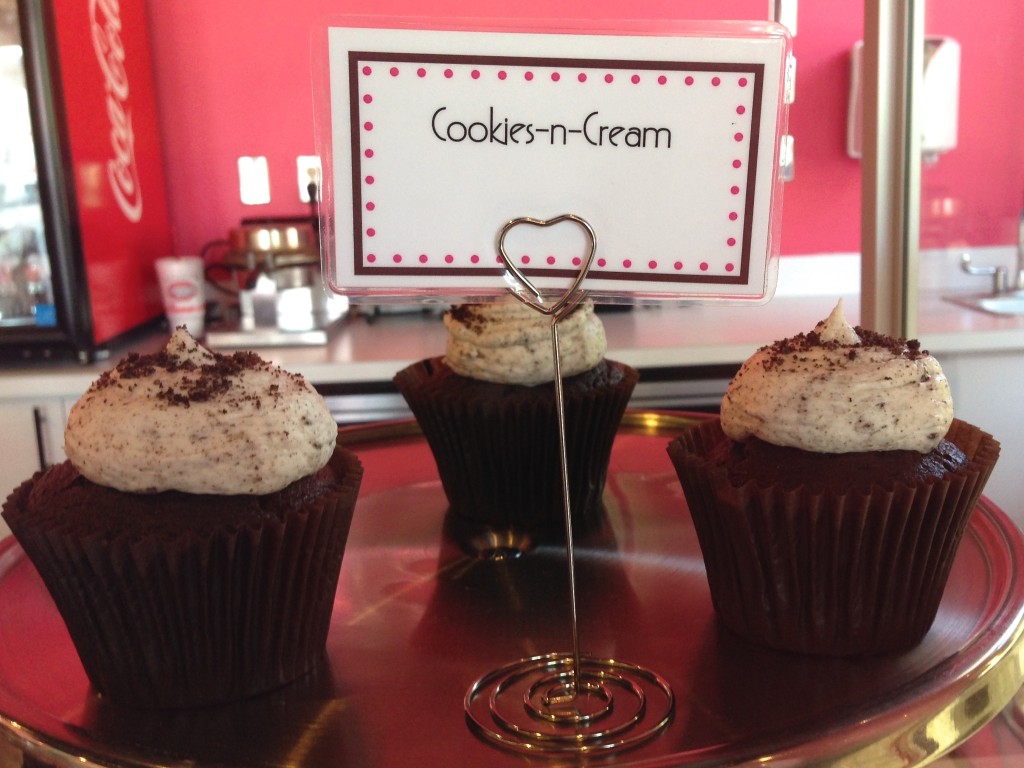