I’m admittedly new to Thai food.  Coming from Mississippi, that wasn’t an option growing up.  So for one of my Thai learning experiences, my friends and I recently went to Lime Leaf Thai in Tapestry Park because it is one of my friend’s favorite Thai restaurants in Jacksonville.  Lime Leaf has been around for a bit and is located by III Forks.  Looking back on this evening, had I known I would end the night in a Benadryl coma due to a refusal to accommodate my food allergies, I would have skipped Lime Leaf and taken my Thai lesson elsewhere. 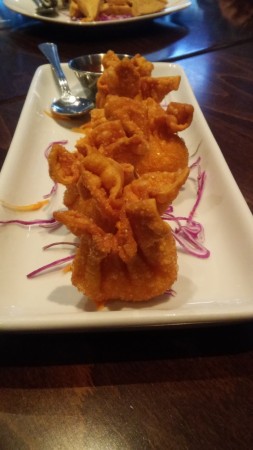 We went to dinner on a Sunday evening around 6 and it was completely dead in the restaurant.  There was one other table seated at the time we began to order (keep this info as a tidbit for later).  The hostess was also our waitress.  She was very polite and promptly brought us waters as well as menus to look over while we waited on one other friend.  We wound up deciding on three appetizers to share while we debated over entree choices.  We ordered the fried tofu ($6.50), the crab rangoons ($7.95), and the calamari puffs ($7.50).  The appetizers all arrived simultaneously.  The portion sizes are huge considering the prices – honestly, most of these could go as a meal with a cup of soup or salad. 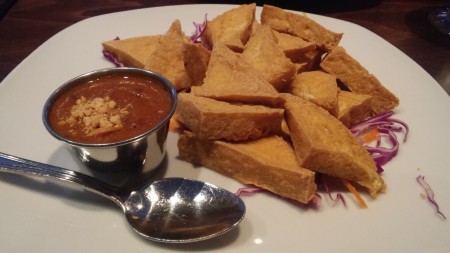 First off, the fried tofu was surprisingly tasty.  Anyone who has had tofu before knows it’s tricky to balance taste and texture sometimes, especially when you’re frying it.  These were flash fried in a crispy batter and served with an addictive sweet and savory peanut sauce.  Without the sauce they were a little bland, the batter wasn’t seasoned at all.  But with the sauce, it gave a good representation of traditional Thai flavors.  The crab rangoons were also delicious.  The rangoons were overly stuffed with blue crab and cream cheese and a little bit of spice.  It was served with a basic, familiar sweet and sour sauce. 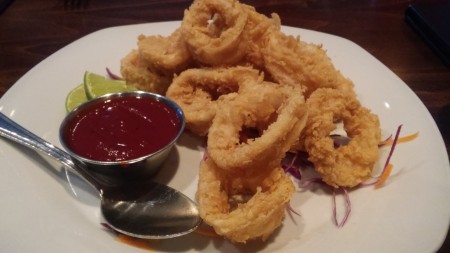 It was the fried calamari that won the appetizer award for the evening though.  Restaurants often brutalize calamari, turning it into the texture of tire rubber if not prepared and cooked correctly.  Lime Leaf’s calamari was perfectly cooked and clearly came from a giant squid because they were the biggest pieces of calamari I’d ever eaten.  The calamari came with a sour tomato sauce for dipping which wasn’t a table favorite.  Something about the balance of flavors was off and it just came off very bitter.  I opted for stealing sweet and sour sauce and peanut sauce from the other appetizer trays.  If ordering this, I’d recommend asking to switch out the sauce if that’s an option. 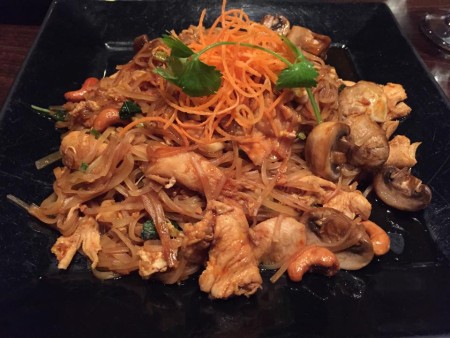 We made it about halfway through our appetizer trays before we decided on our entrees.  One friend went with her go-to chicken Phad Thai ($14.95), my other friend went with chicken drunken noodles ($15.95), and I opted for the pork Phad Ba-mee ($14.95).  Here’s where the evening went south.  I have two simple food allergies: bananas and bell peppers. Bell peppers are not a severe allergy (no epi pen needed) but do cause me to swell, itch, and get hives.  I saw from the beginning of ordering that bell peppers were in nearly every dish.  I made it clear to the waitress that I needed no bell peppers in my food.  I watched her write it on the ticket, so there was no confusion in the order.  Our food was brought out by a food runner, not our waitress, without too long of a wait and my friend immediately spotted copious amounts of bell peppers in my entree.  I told the food runner that it would have to be remade, that I am allergic to bell peppers and couldn’t eat the dish prepared with bell peppers in it.  The waitress came over once she realized what happened and apologized, saying the routine of making a dish over and over again warrants mistakes every once in awhile.  I totally understand that and was not frustrated in the least to wait for a new dish.  While I waited, my friends tried their entrees.  The Phad Thai was fairly standard – huge portions of rice noodles stir fried with eggs, bean sprouts, and scallions and topped with peanuts and lime.  Everything you’d want out of Phad Thai was evident in this dish.  It’s a basic dish great for first time Thai excursions or Thai traditionalists.  While the prices at Lime Leaf are a little high, the portion sizes reflect this.  None of us made it more than halfway through our entrees.  My other friend’s drunken noodles came with rice noodles, bell peppers, mushrooms, jalapeno peppers, cashews, scallions, and sweet chili sauce and had fresh basil as well.  My friend opted for hers “mild” when she ordered and it still came out very spicy, but it was flavorful with all the vegetables and the spices weren’t too overwhelming for her, but could be overwhelming for those who are more sensitive to heat. You hear your whole life that “hindsight is 20/20” and that definitely applies to my dinner.  Looking back, my “new” food arrived way too quickly.  But being my usual half starving self, I dug in without doubting that my allergy wasn’t taken seriously.  As my friends had already started, I ate pretty quickly and finished about half my bowl before calling it a day and asking for a to-go box.  My pork phad ba-mee was served with egg noodles, broccoli, zucchini, snow pea pods, carrots, baby corn, and onions.  I ordered mine medium and it also had some serious heat to it but I love spicy food and enjoyed the flavors. 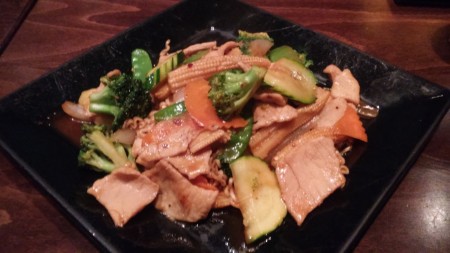 We got our to-go boxes pretty fast, paid, and headed back home.  About 5 minutes into my drive my face started to swell.  Then I got hives all over my chest.  Then I began to itch.  I had to pull to the side of the road, knowing good and well what was going on, to dose myself with some emergency Benadryl before the situation got worse.  Clearly my food was not re-prepared as I asked.  It was sent back to the kitchen, someone pulled out the bell peppers, waited a few minutes to make it seem legit, and re-served me my food.  Now this wouldn’t be a huge issue if it was a salad with bell peppers in it that are raw and haven’t been cooked into the food.  But when you’re cooking these ingredients at high temperatures and cooking them together, allergens can react just as violently.  The most appalling part of the situation is that as I mentioned earlier, the restaurant was dead.  There weren’t 30 tickets in the window waiting to be prepared and someone in the kitchen accidentally sent my food back out without it being recooked.  By the time I got home my face was so swollen that I was in physical pain.  It absolutely floors me the sheer laziness that went into me having to suffer for nearly a day before all the swelling receded.  Yes, I’m aware the restaurant’s food costs were a few dollars higher because they prepared something incorrectly and had to throw it out (in theory).  However I notified them in advance that I needed an ingredient removed from a dish.  A customer should never have to worry about that being an issue if requested (technically twice requested) for removal.  A customer should REALLY never have to worry about this issue when they emphasize that allergies are the reason why an ingredient can’t be present.  It’s not that I don’t like the taste of bell peppers.  It’s that I don’t like looking like I had cheap botox done and I especially don’t like the clawing that comes along with having hives.  Or the fact that the rest of my evening’s productivity went out the window in lieu of a Benadryl coma.  Sadly, the food at Lime Leaf Thai was delicious.  But I can’t say I will ever return, nor do I recommend anyone going with any type of allergy.  Apparently that isn’t high on their list of customer service concerns.