Eight years ago, Adnan Korjenic and his father opened a small restaurant named Balkan Café on Beach Boulevard across from Super Walmart in the Rowe’s grocery shopping center.  Balkan Café serves up Bosnian and Eastern European cuisine.  This great little café has become a favorite of the local Eastern European community and of Europeans passing through Jacksonville on their way to Orlando.  However, it’s flown under the radar for far too long with much of Jacksonville. 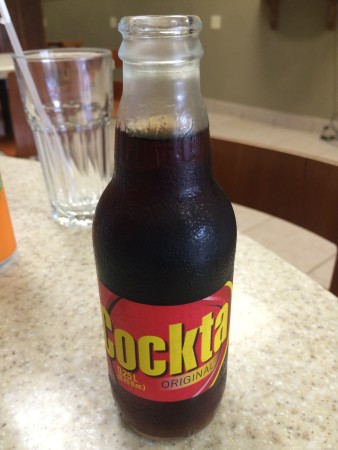 The restaurant itself is fairly sparse but what the place lacks in decorations, Adnan makes up for in passion for the food of his culture.  Virtually everything served at Balkan Café is made in house daily – from the sausages to the shish kabobs to the cakes that Adnan’s mom bakes.  You won’t find prepackaged or frozen foods served in Balkan Café anywhere.  Balkan Café opens at 10am and closes when they run out of food.  On the weekends that’s often around 3pm and during the week it’s usually a little later. 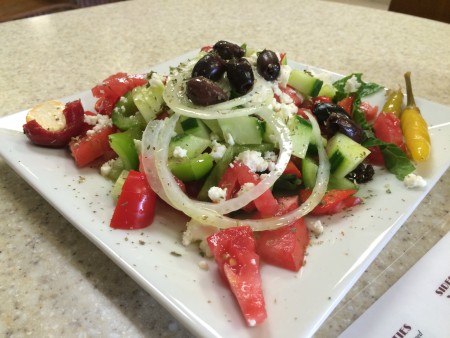 Our suggestion for your first time at Balkan Café is to try the get the Balkan Mix.  For $9.95 you get cevapi, sudzuka, and grilled veal strips mixed with grilled mushrooms and onions.  All this comes in the center of a tasty flatbread.  We started things off with this entrée.  When the dish arrived all I could think was, “I can’t believe how much meat they give you for $9.95”.  Two people could eat it.  The veal strips were roughly what you’d expect.  They were reasonably well prepared.  Cevapi is a type of skinless sausage typical of the Balkans.  At Balkan Café it’s made of minced beef and lamb.  We really enjoyed it.  It actually reminded me a lot of the kofta kabob at Café Kabob on Baymeadows road which we previously reviewed here.  By itself this sausage is fairly mild and on the blander side.  But tucked between a bite of bread basted with the ajvar (a Serbian vegetable dip made with roasted eggplant, red pepper, and garlic) with which this dish was served, it’s pretty darn good.  The dish was actually served with ajvar and kaymak, which is a type of cheese that’s similar to clotted cream.  I fell in love with the ajvar and my dining partner for the meal fell in love with the kaymak.  Kaymak to me tasted a bit like a super rich and creamy butter.  I have a feeling that most people will really enjoy one or the other.  The third meat the dish was served with was sudzuka.  This is another kind of skinless sausage which was very mild.  Again, the sudzuka was pretty darn tasty when eaten on bread with some ajvar or kaymak spread.  I imagine almost everyone reading this would enjoy it. 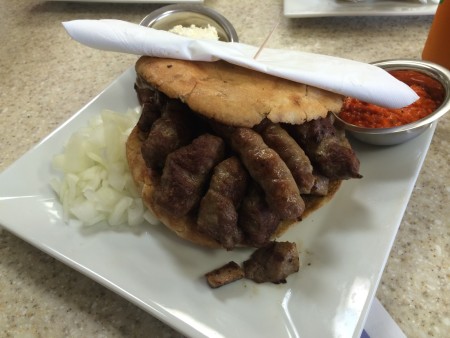 For dessert we got a chance to try both of the amazing cakes that Mama Korjenic makes.  The first was a Nutella cake which Nutella lovers will go crazy over.  My dining partner absolutely loved it.  You could tell it was made fresh in the last day or two and every bite offered up flavors of chocolate and peanut butter mildly woven into wonderful cakey goodness.  The final dessert was Snow White cake.  This cake was made up of three layers.  The top and bottom layers were merengue and the middle layer was a kind of pudding.  With one bite I was instantly in love.  The decadent middle pudding layer was rich and creamy.  Actually, it was rich and DREAMY!  The mild top and bottom layers offered up a nice balance to the richness of the middle. 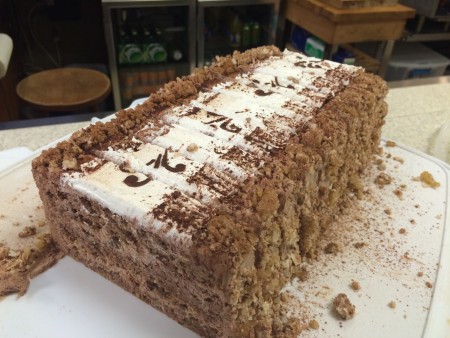 Across Jacksonville there are tons of unique little ethnic restaurants serving delicious, authentic cuisine that the average Jacksonville diner has no clue exists.  Balkan Café is one of those restaurants.  We arrived new to Eastern European cuisine and we left with an appreciation for the passion that this family has for sharing the food of their culture with the Jacksonville community. 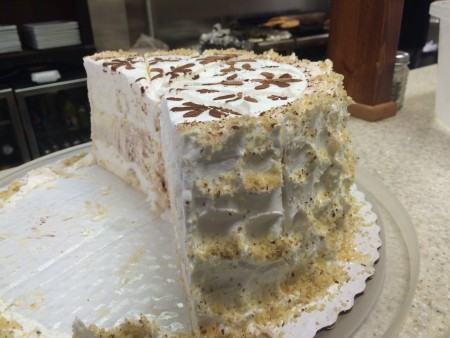