One of our favorite chefs in Jacksonville to work with is Chef Arielle of the Five Points staple Tapa That.  She exudes a passion for cooking that isn’t just love of cuisine, it is desire to push the envelope and explore exotic combinations.  Her Cuban heritage greatly influences her day to day cuisine, so when we challenged her to a six course vegan dinner we knew she would rise to the occasion and step outside of her comfort zone. 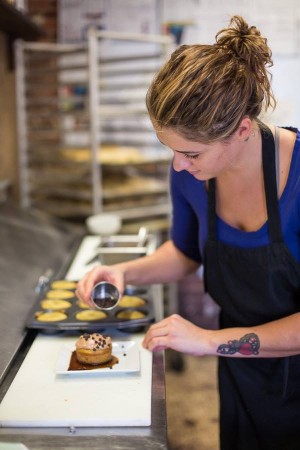 Professionally, Arielle began her culinary career with Pastiche as just a water and bread girl.  One day the chef heard her talking about growing up and cooking with her grandparents in Cuba.  Immediately he said “ Let’s go into the kitchen.”  Arielle was still in her serving uniform that night when she began to learn the basics.  From there, Arielle worked at a few more bistros around Jacksonville, gaining experience and growing her skill set.  “I opened up for a lot of places.  Caribbean House, the Bungalow.  I learned how to make pasta from scratch and all the French sauces.  I learned something from each place I worked,” Arielle explained.  “My love for cooking came from my grandparents.  We spent the whole week cooking for Sunday dinner.  Every afternoon after school we were soaking beans, pre-making the tostones.  From there it grew into a more lucrative passion.” 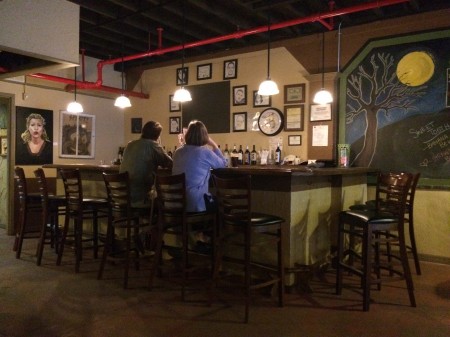 The path to the birth of Tapa That was a winding road.  Arielle and her family were anticipating coming into money that they weren’t sure what to do with.  They originally discussed flipping cars or houses but she knew she was ready to cook.  Lomax Lodge had just opened when Arielle took interest in the Five Points community.  Arielle was weighing the merits of renovating a space that was not formerly a kitchen and exhausting her funds in the remodel.  Fate intervened, and the day Arielle and her family received the money they anticipated the landlord called to say the space that would become Tapa That had become available.  “We jumped in and thought it would be clean up only but no.  Definitely not.  About six months past the time we thought we would open we had our soft opening.  The next day, my mom went down to the inspection place to verify everything and found out they had never separated these two buildings legally.  There had been like twenty businesses here before us.  We had to redo all the inspections.  We were going to open in February and wound up not opening until April.”  Arielle was not deterred in the least.  She looked at the situation as temporary rest to prepare herself for what she knew would be an intense transition into building a restaurant and brand. 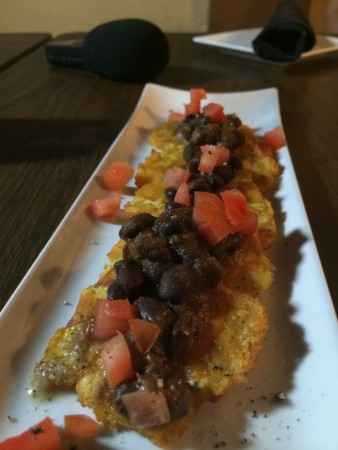 Tapa That was originally going to be a tasting room for Arielle’s catering.  She didn’t want the chaos associated with a restaurant and knew her kitchen space would be limited.  Once they finally did open, they started with a menu on the wall on a chalkboard and each night recorded with pen and paper what tapas were selling and which weren’t.  In fact, they still operate without a point of sale system and do most of their menu tracking by hand.  Arielle intentionally changes her menu frequently, explaining “I change my menu all the time because I get bored cooking the same things all the time and you get bored eating the same things all the time.”  Their menu also changes seasonally due to Arielle’s excellent relationship with the local farmers and vendors.  They love to bring her fruits and vegetables that they’re unsure how to use or sell for her to create something memorable and exciting.  Arielle is also incredibly open and accommodating towards special requests and encourages any guest seeking a special off menu item to call 24 hours in advance and she will do her best to scale any ingredient or dish into a tapa.  In fact, that is where the name “Tapa That” originates – Arielle is prepared to turn anything into a tapa.  Suggest it to her, and she will “tapa that”. 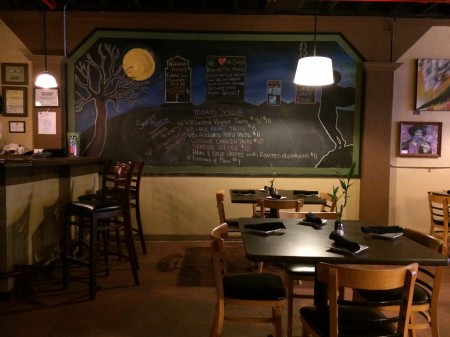 Tapa That – Menu Board

In fact, it was one of these special requests that spawned Arielle’s interest in creating vegan tapas with more depth.  Jessica Campbell from Jax Vegan Love came in to eat at Tapa That and tried two of the salad options that were Arielle’s only vegan choices.  Jessica called Arielle shortly after asking her to design a vegan Mother’s Day brunch menu and Arielle rose to the task.  Since then, Arielle has established a strong relationship with the vegan community in Jacksonville and is constantly looking for innovative ways to break the norms of vegan offerings in restaurants.  Arielle was out of her element originally as the menu at Tapa That is highly cuban influenced and thus contained a tremendous amount of pork.  Arielle’s goal was to provide vegan tapas that were still hearty and substantial like she was accustomed to in Cuban cuisine.  Her answer came in an unlikely source–jackfruit.  Arielle has experimented with jackfruit so much that now her staff nine times out of ten can’t identify the difference in her dishes that include chicken or jackfruit.  In Arielle’s ongoing effort to provide for her vegan base, she is considering learning to make vegan cheese herself to maintain the quality and taste that she wants to present in each dish.  Arielle even broke down the most basic breakfast staples–eggs and sausage–and experimented with vegan ingredients until she designed a tofu based “egg” that exactly mimics the texture of eggs and pairs it with Sweet Theory white bean sausage.  Her goal is to provide vegans with food quality that they have never experienced in other restaurants. 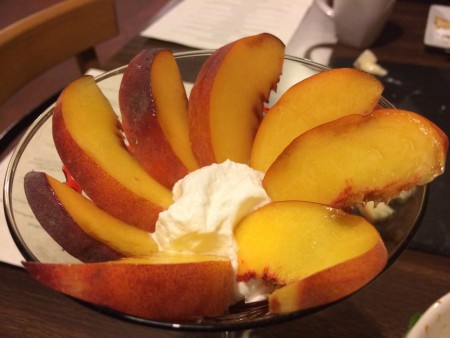 Tapa That – Peaches and Cream

When it came to creating the menu for our upcoming Jax Food Adventure, Arielle went back to the drawing board to create dishes that Jacksonville has not seen before.  In particular, her journey to the plantain bisque was a complete accident.  “My partner Michael bought a huge box of green plantains for tostones.  However, green tostones don’t stay green for long.  I was stuck with about 12-15 ripened plantains.  I made a soup broth and as I cooked it, it became super starchy and developed into a bisque.  I stepped away for a minute to get a hand blender and it burned through but I KNEW I had something!  I knew the flavors were absolutely amazing.” 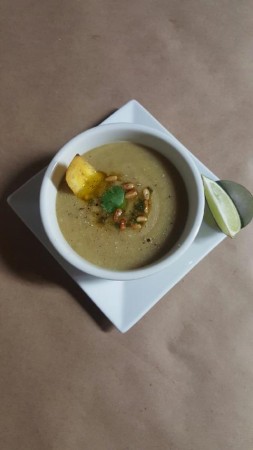 It isn’t easy in the culinary world being a female chef, in particular a young female chef.  Arielle has used her extensive mentors in Jacksonville including Chef Howard from 13 Gypsies, Chef Amadeus, and Jonathan from Mossfire Grill to guide her along the way.  She has fought the stereotype of “no one expecting extravagance from a young female” and now surprises her customers regularly by greeting them at their tables and checking on their experience.  “It’s funny to watch them talking to me and then seeing the realization on their faces that they’re talking to the chef.  They look at me and I’m not wearing a chef’s coat, then through the conversation it finally dawns on them.”  Arielle teared up a little as she told me “I’ve had so many women and young girls tell me while they were crying that they respect what I do and that it empowers them as women.  I’ve had little girls draw me pictures and say they want to be like me.  It’s so amazing.” 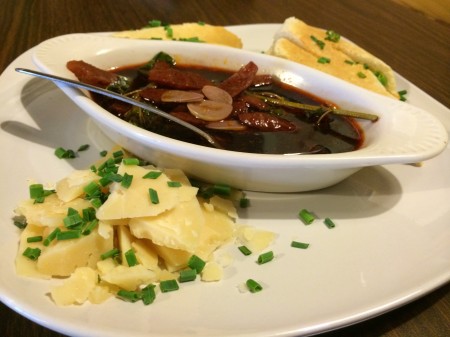 One step into Tapa That and you feel like you’ve been welcomed into Arielle’s home.  Many of her regulars feel the same way.  Arielle shared her favorite customer story with me as we visited, which actually turned out to be a perfect testament to Tapa That’s over the top customer experience.  “A couple came in on their first date for Saturday brunch.  They stayed an hour after close and we let them sit and get to know each other.  They then came back that night when we reopened for dinner, and again stayed an hour after close.  They still come in about twice a week and sit here for hours.  We want it to be a family environment and comfortable and relaxing.  This is why we love what we do.”  The familial atmosphere extends past the walls of Tapa That into the entire Five Points neighborhood, which is quickly turning into a miniature city of it’s own of which Tapa That is an anchor.  Arielle emphasized the importance of shopping locally within your neighborhood and community.  “These aren’t just local businesses, they are local families.  If you’re supporting us we have money to put back into other businesses in the area.  That is part of our connection to keep the homeliness that we have here and keep that culture going.”  Jacksonville is beyond blessed to have this empowered and inspiring woman guiding the Five Points area with her unique cuisine and her passion for creation.  Join us September 30th at our vegan food adventure to experience it yourself.