For today’s review we visited Cafe Kabob located at 8600 Baymeadows road near where Baymeadows road meets Interstate 95. Cafe Kabob is a newer restaurant only open since the middle of March 2014. They offer Iranian/Persian and Middle Eastern cuisine as well as an item or two you wouldn’t expect (such as the Korean dish Kim Chi). The restaurant is very small and the owners are incredibly welcoming. At Cafe Kabob there are no frills. They serve no alcohol and they are clearly focused on putting out great food. 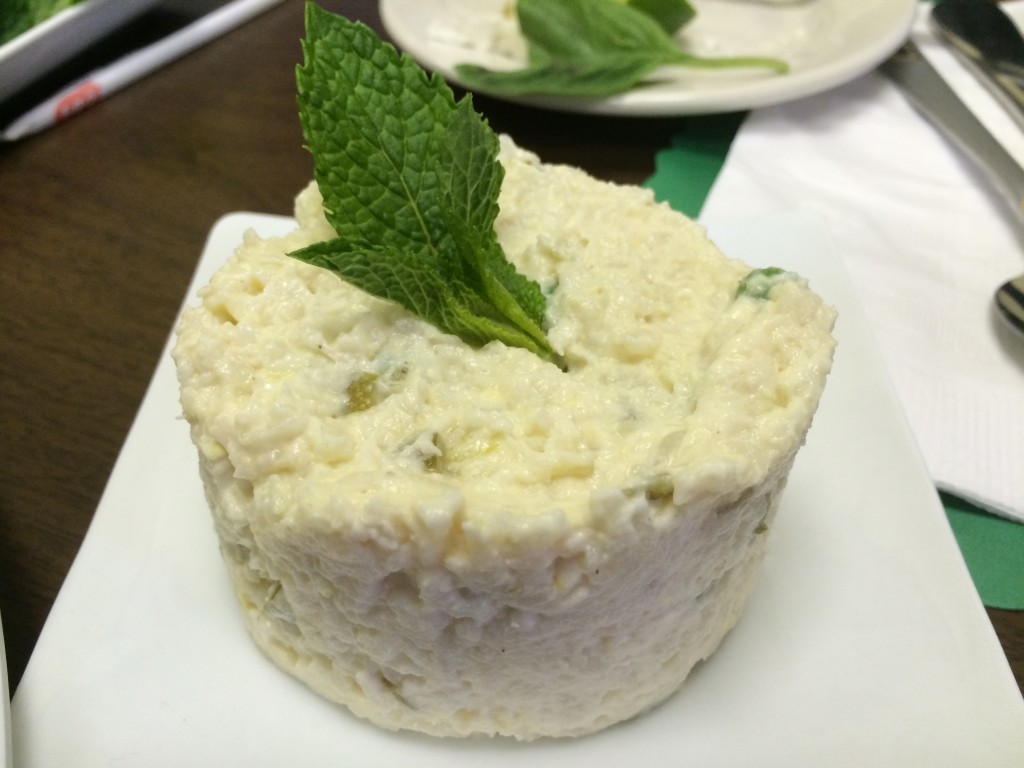 On this visit we joined a group of friends for a dinner with a set menu. First up was the Olivier salad. It’s a cold salad of chicken, potatoes, and eggs with Persian pickles. It sounded a bit odd to me, but man was it delicious! Throughout our meal I kept going back to the Olivier salad. The owner/chef explained that years ago when he went off to university in England, the only thing he knew how to make was Olivier salad. It sure beats the ramen and easy mac I used to live on. Definitely give the Olivier Salad a try. 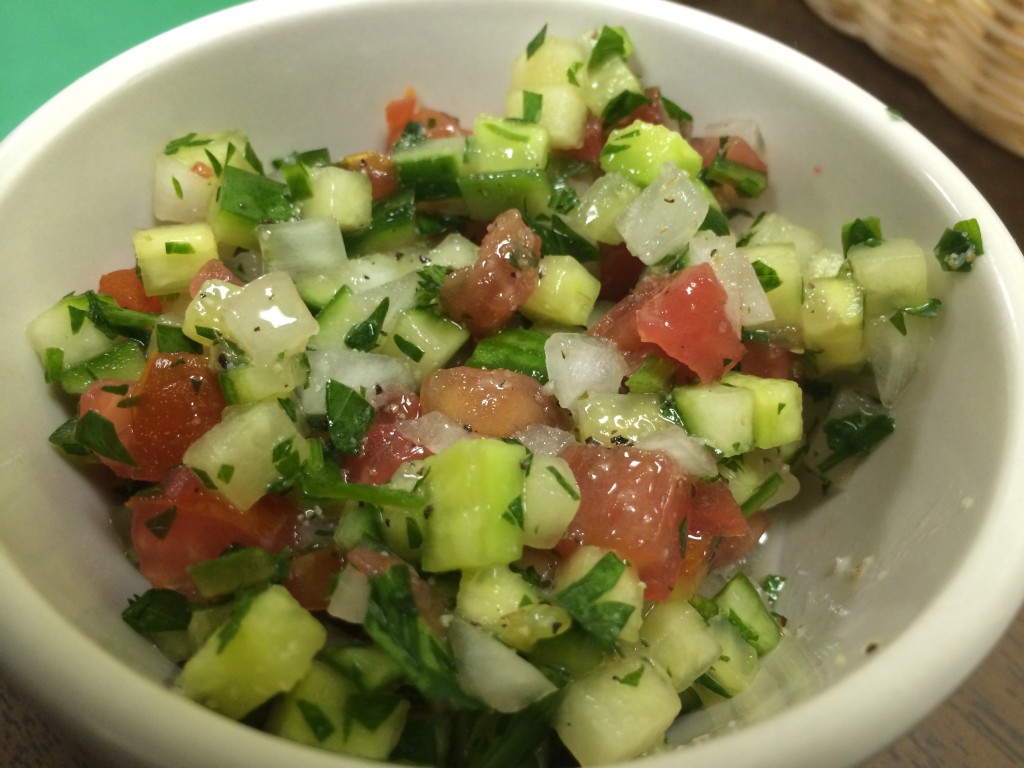 Following the Olivier was a plate of hummus, two ways, with pita and Kim chi. The two varieties of hummus were plain/traditional and the other was mint, basil, cilantro, with extra garlic and lemon. The traditional hummus was excellent, but the herbed hummus was out of this world. I briefly considered just grabbing a spoon to eat it, it was positively scrumptious. I love creative, passionate chefs. I’ve made my own hummus a time or two, but I’d never think to combine mint, basil, and cilantro. My tastebuds are glad someone else did. Along with the hummus two ways was house made kimchi. We were surprised to see kimchi on the menu and on our table, but it was a delicious, well made, and healthy compliment to our meal. This kimchi was far, far better than I’d ever expect from a Middle Eastern restaurant. 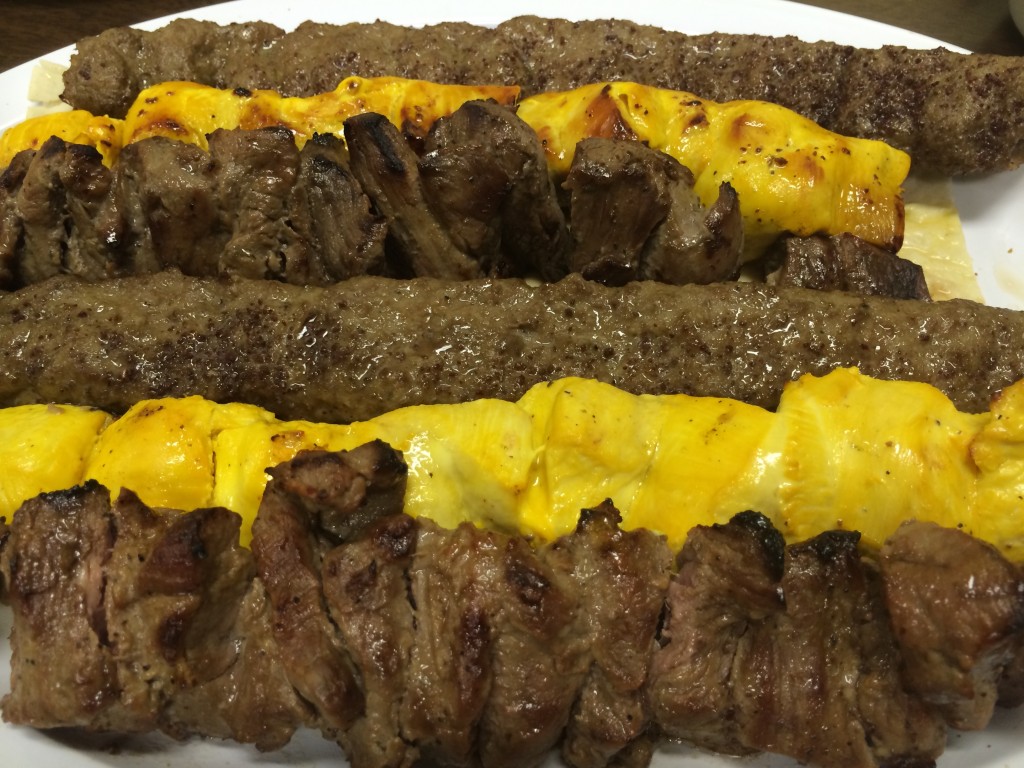 After the hummus and kimchi we sampled the Shirazi Salad (a blend of diced tomato, onion, and cucumber). Here’s the thing. You really have to like tomatoes, onions, and cucumbers if you’re going to like the Shirazi Salad. Fortunately I was a fan so I ate mine and took my dinner partner’s home with me. The ingredients were very fresh and complimented one another perfectly. 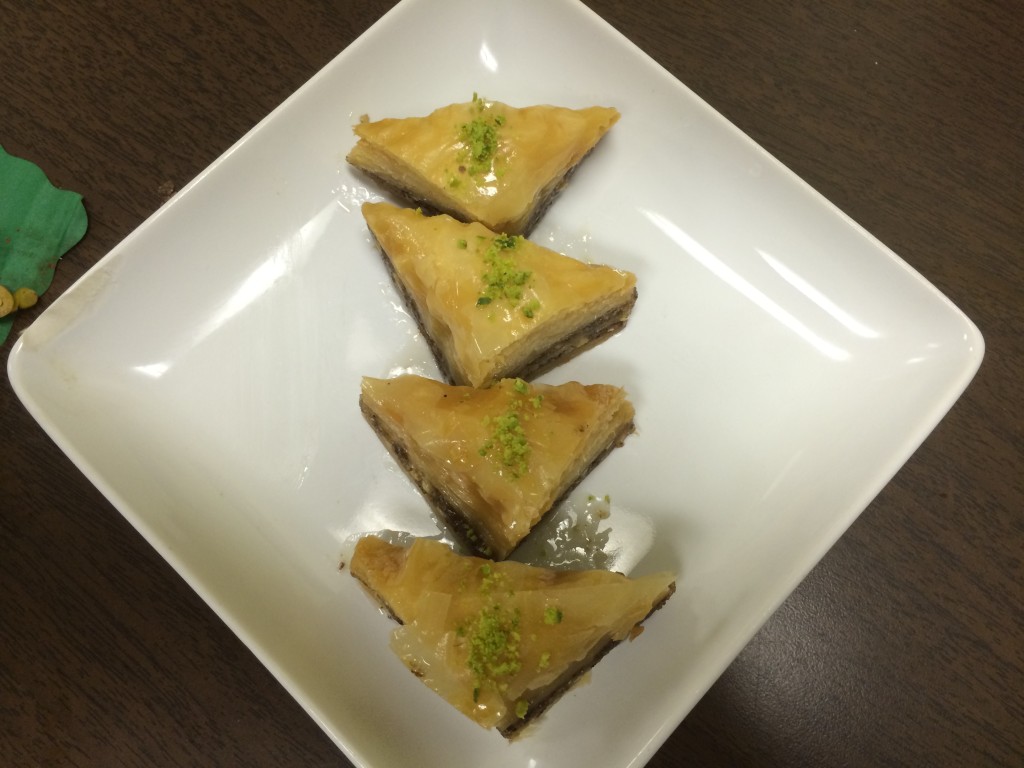 After all that we finally got to our entree. We tried 3 kinds of kabobs over basmati rice: ground beef, chicken, and beef tenderloin. The most important thing to know about the kabobs at Cafe Kabob is they are cooked fresh when you order them. This may sound basic, but you’d be surprised how frequently food is precooked and then reheated in restaurants. Not the case at Cafe Kabob. So, how were our kabobs? As one who does not have strong feelings for or against meat, I dove into the chicken. It was good, juicy, but not the most flavorful chicken I’ve ever had. The chicken and the basmati rice tasted better together than on their own, as chicken and rice usually do. I tried some tenderloin and was pleasantly surprised at how gratifying and flavorful it was. I was slightly timid about the ground beef kabob as it was outside my realm of experience. Really, how is ground beef on a kabob supposed to taste? Amazing. Ground beef kabobs are like heaven in a meat stick. The herbs and spices in the ground beef kabob made it sing. I was shocked that as a self-proclaimed chicken person I preferred the two beef kabobs over the chicken, but I’m sure the folks at Cafe Kabob were not surprised. Their meat is magical.
For dessert we had some baklava and roulette (a cake rolled with whipped cream). The baklava was legit. As someone who grew up eating Baklava in Tarpon Springs, a historically greek settlement near Tampa I can definitely vouch for the high quality of Café Kabob’s. Do not buy packaged baklava at the grocery store and think you are having the real thing. Go somewhere (like Cafe Kabob) where there is homemade baklava. The roulette was light yet still rich and decadent. It was yet another item where its freshness was evident and the taste was enhanced because of it.
Cafe Kabob may appear to be a small, unassuming restaurant tucked away in a busy shopping strip. However, their culinary viewpoint is solidly defined by the fresh ingredients they use and the quality they serve. If you’re looking for middle eastern cuisine, don’t miss Cafe Kabob.