You may not believe us when we tell you that a little restaurant named 4 bones(not to be confused with 4 Rivers) at Beach blvd and San Pablo rd has some of the best BBQ in Jax. I guarantee that after one visit you’ll see the light. 4 Bones is relatively new (opened last year) and located in a strip mall at San Pablo Road and Beach Blvd. It’s a fast casual style restaurant with some of the best barbecue you’ll find in town. Not to mention the folks that work there are super nice and the restaurant is clean. The owner works the counter every day and his passion for great BBQ just oozes from his pores. After 80+ restaurant reviews we’ve come to appreciate like never before the old adage that cleanliness is next to godliness. 4 Bones is clean! God bless’em. 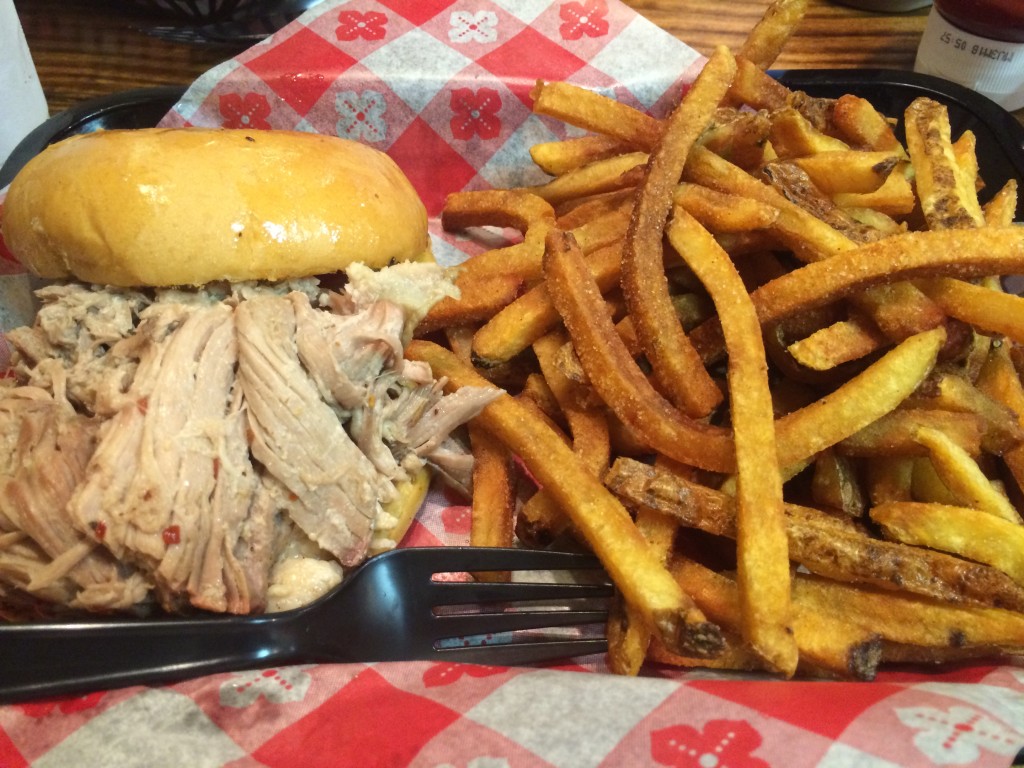 4 Bones offers a wide variety of barbequed meats, from the expected pulled pork and brisket, to less common Carolina chopped pork and chorizo. The sandwiches range from typical to quite imaginative with such varieties as the Chivito (grilled steak, bacon, ham, fried egg, cheese, lettuce, tomato, mayo) and the Bacon Mac n Cheese Melt. 4 Bones also covers all the bases when it comes to sides, including hand cut fries, fried corn on the cob, corn nuggets, green beans, baked beans, Brunswick stew, mac n cheese, and a few that I can’t recall . There are more sides offered in the restaurant than are listed on their website.If you choose a BBQ platter at 4 Bones, you choose your meat and either small (about 1/3 lb) or large (about 2/3 lb), then your two sides. On this visit we shared two different  two meat combos. The first had pulled pork and chorizo with baked beans and green beans. The second had brisket and St. Louis ribs with baked beans, corn nuggets, and mac n cheese. That third side was extra. The teenager had a pulled pork sandwich and fries. 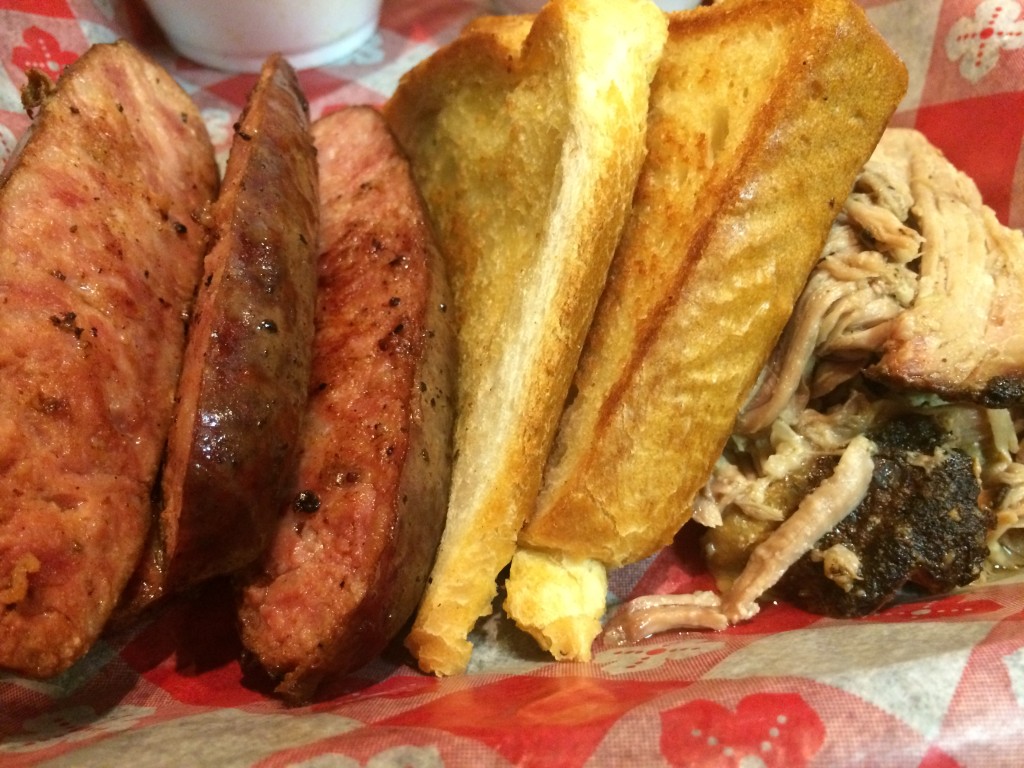 First we’ll talk meat. On their website 4 Bones says they hardwood smoke their meats for hours. They are not joking. All of the meat had a deep smoky flavor you don’t find in chain BBQ joints. Man, it’s smoky! And in such a good way too. The pulled pork was smoky and tender and there was plenty of it. The brisket was good. Unfortunately we had a couple really fatty pieces, but there were a couple that weren’t as fatty that were really good. Not the best I’ve ever had, but solid, and again better than chain BBQ restaurants. The St. Louis ribs were incredible. The flavor was out of this world and I could have eaten them with a spoon. These are the ribs you dream about. We haven’t tried every rib in Jacksonville but I can’t think of any I’ve had that I liked better. The chorizo was peppy and smoky and there was plenty of it. I love all things sausage and found myself wishing the next morning that I had more of that chorizo to eat with my eggs. I will mention that if you’re not a big sausage person the flavor might be a little overwhelming for you. Since I love sausage I thought it was pretty great. 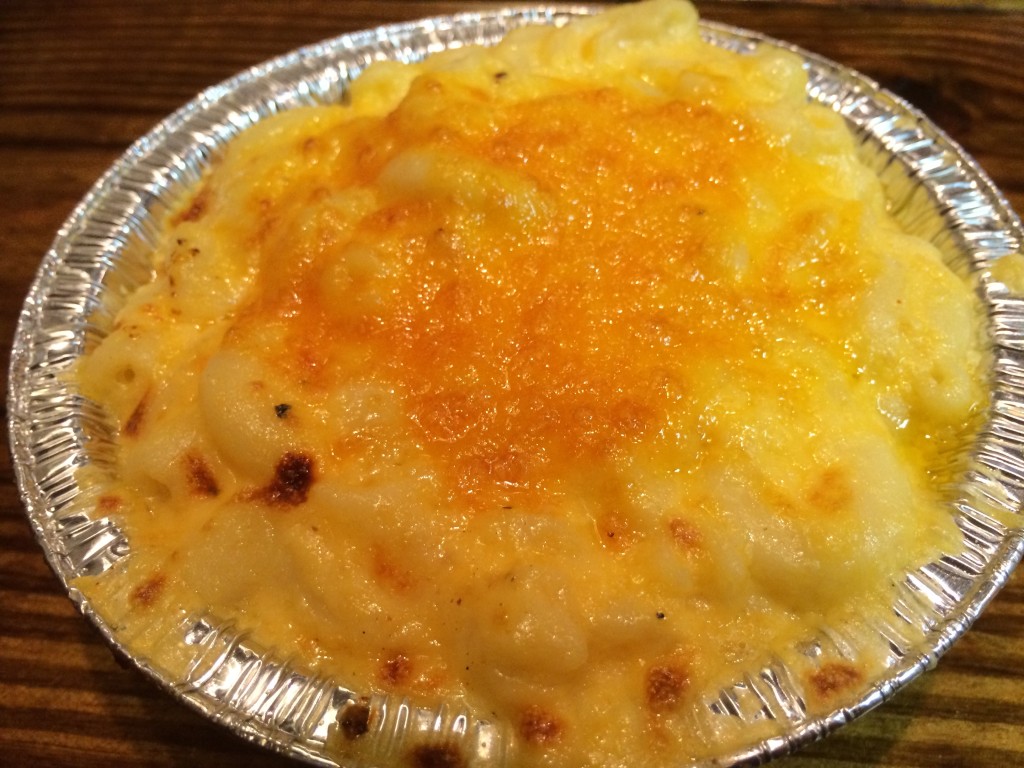 Now for the sides….The folks at 4 Bones put their own twist on most of the sides they offer. We found that sometimes that turned out really well, in the case of the fries and the mac n cheese. Sometimes we found they were a little out in left field in the case of the baked beans and green beans. Those weren’t bad but they are really different than what you’d normally expect.The hand cut fries looked awesome and they tasted nearly as good as they looked. The mac n cheese was excellent. What set it apart was that each serving is in a tart sized tin, topped with cheese, and cooked until the top just starts to brown. Typically in restaurants mac n cheese is cooked in a large pan and individual servings are scooped out, so you miss out on that cheesy browned “crust” that forms on top. At 4 Bones you get maximum crusted top on your mac n cheese. Mmmmm! The baked beans are unlike any other baked beans you have probably ever eaten. They are  good, but they are very different. The baked beans contain a variety of beans, including what appears to be butterbeans (large flat white beans), kidney beans, and chickpeas, and possibly another variety that I’m missing. They are cooked in a flavorful but runny sauce with chunks of pork. The baked beans are great, but they’re almost more like a super chunky bean stew. The corn nuggets were a delight of a side. Rarely will you see corn nuggets as a side. They are usually an appetizer priced at $5 or more. These were good corn nuggets and even better that we could order them included in our meal. The green beans were another unexpected preparation. They were tender, but they were in what I could best describe as a tomato chutney. It was sweet and tomatoey and a pretty big surprise at first bite. The green beans weren’t bad, but five or six bites was enough for me. 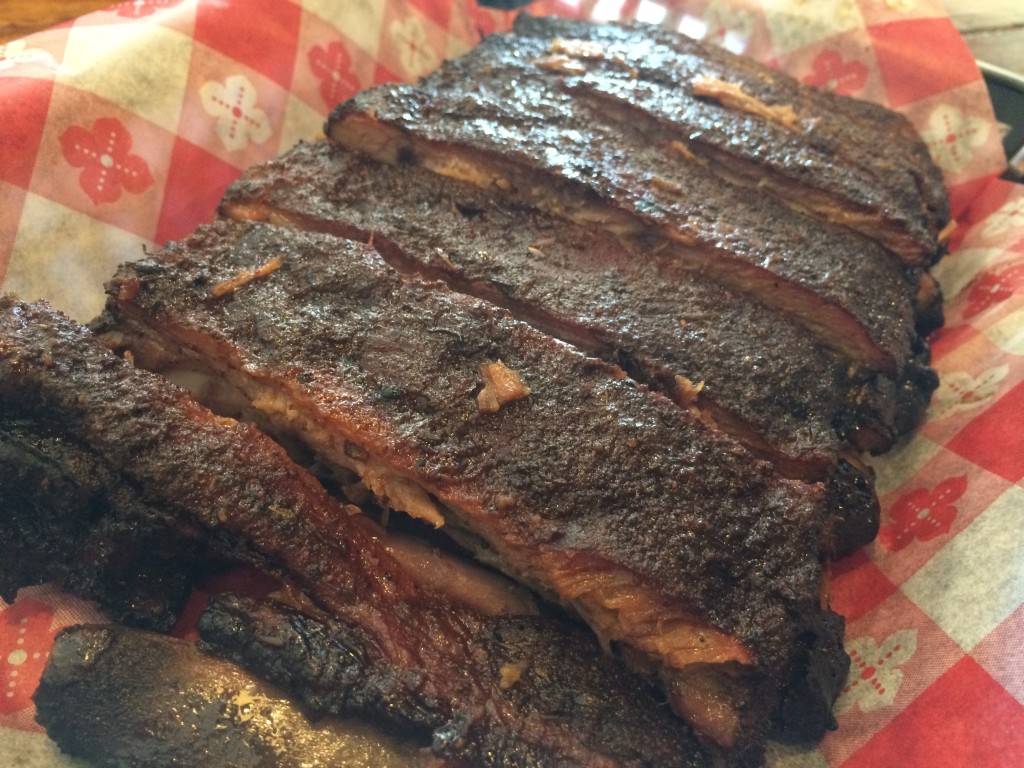 4 Bones also makes all of their own BBQ sauces in house. The sauces include sweet, mustard, chopped, and hot. They are all thinner sauces than you are used to seeing, but they do have a lot of flavor. The sweet isn’t as sweet as chain BBQ sweet sauce varieties. Chopped is a vinegar based sauce. It’s a good sauce, not too overwhelming. We’re not into hot or mustard BBQ sauces so we can’t speak to those, but it’s safe to say that those are both executed in a distinctly 4 Bones way. 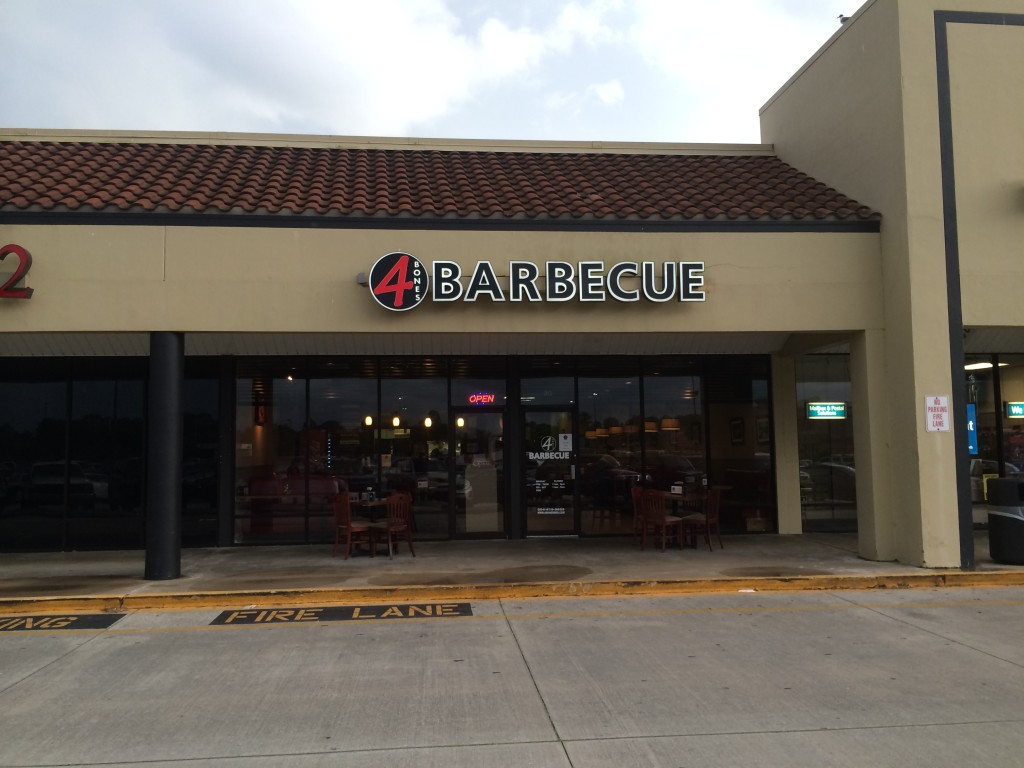 Let’s talk about service. All of the people that work at 4 Bones are very friendly and know the menu well. The owner works the counter and supervises every detail of the business at 4 Bones BBQ. The man is detail oriented. On my first visit he took the time to walk me through half the item on the menu with an enthusiasm rarely seen in Jacksonville restaurants. The man loves what he does. He’s the kind of guy you’d want in charge of you owned the place. At a fast casual place you don’t have a waiter and in many no one ever comes to check on you. At 4 Bones they came to check on us twice and make sure everything was to our liking. The trend at fast casual joints is to ask diners to clear their own plates. Maybe I’m lazy but it kind of annoys me. 4 Bones clears them for you. 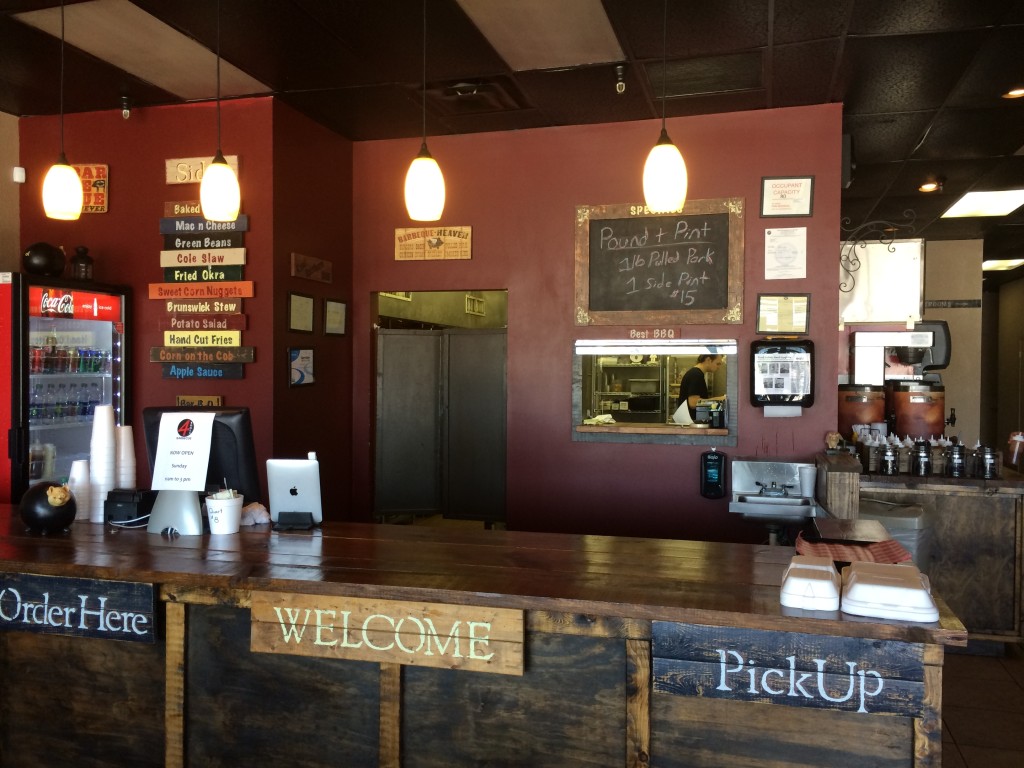 4 Bones is simple and awesome. Passion, Cleanliness and Quality, that’s what they do.Pros: