When two time James Beard award nominated Chef Tom Gray opened Moxie Kitchen and Cocktails in The St Johns Town Center we fell in love with the whimsical style with which he effortlessly wove together skillfully prepared cuisine and the tastes of childhood in his modern American styled restaurant. This week he opened his newest entry into the Jacksonville scene, Town Hall Restaurant in San Marco. In contrast to Moxie’s rather whimsical style Town Hall has a west coast vibe and a style that has a more refined feel. Where Moxie often takes things you’re familiar with and offers them with a fun new twist or styling, Town Hall offers you cuisine elevated at a level not often found in Jacksonville restaurants.

Walking into Town Hall is walking into your best friend’s home for a dinner party. To the left, a mismatched living room set with slightly worn chairs and a coffee table leaves the appearance that the party guests have moved into the kitchen to chat with the cook. A few steps away after leaving the living room you are transported into the bar area with a wine and beer selection that would be the envy of any guest. Cozy up there and enjoy a drink and chat with the party guests, or make your way into the darker, mood-lit dining area and kitchen for the real gem of the evening. A few well placed tables create dining intimacy that encourages you to just relax and watch the show–the show being the brightly lit open kitchen with quiet chefs moving with precision to prepare what will likely be one of your most memorable meals of the year. 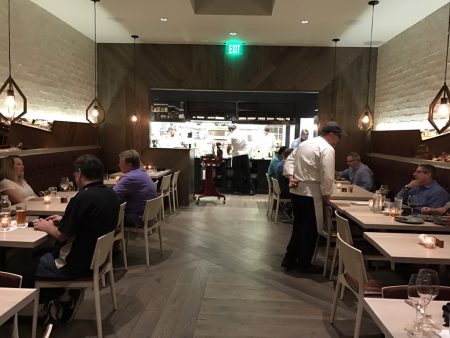 We tried a wide variety of Town Hall’s menu items in order to give you a good look into what we’re certain is one of the hottest restaurants that will open this year. Here are the dishes that stood out to us.

First, the cheese and charcuterie plate which Town Hall calls “Cured and Aged”- housemade cured meats, artisanal cheese, housemade lavash, pickled veggies, nut compote, local honey + preserves. If you’ve brought someone you want to impress to dinner order the full six selections and enjoy the excitement on their face as this impressive two story plate arrives to the table. There are 3 options:two selections, $12 / four, $20 / six, $28. We went big with the full 6 options. The cured meats were really good and the presentation was fantastic! The cheeses are killer if you prefer mild cheeses since all 3 cheeses are pretty mild. The Thomasville Thome is always a fan favorite and the house made pimento cheese is top notch. If you have a preference for stronger cheeses you may want to pass on the cheese plate since it won’t have enough pop for your tastebuds. We loved the accompaniments that came with the cheeses: housemade lavash, pickled veggies, nut compote, local honey + preserves. 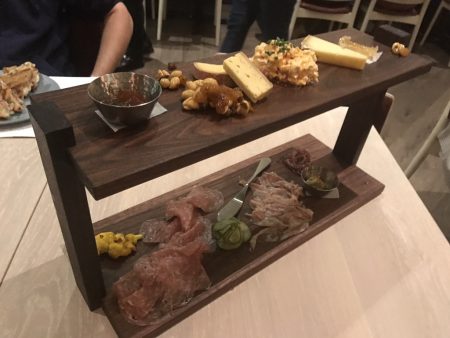 Sometimes it’s the simplest things that end up being the most exciting. Such is the case with Town Hall Restaurant’s duck fat cornbread($7) served with spicy slaw, candied peanuts. We’ve all seen cornbread brushed with with butter then grilled for a short time. This cornbread appears to share this preparation substituting duck fat for butter. It’s pure magic! The spicy slaw is just slightly spicy with a bit of sweetness that perfectly complements the savory cornbread. This is the appetizer we’ll order every time we come. 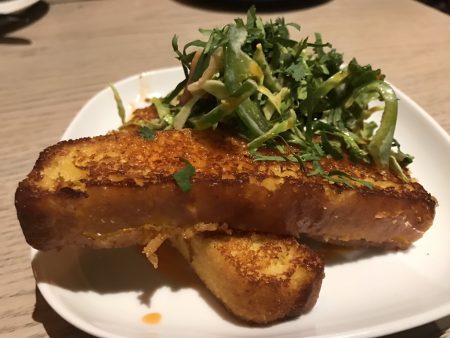 You might not expect french fries at a place as upscale as Town Hall but you’d be wrong. Town Hall has even found a way to offer french fries in a style you’ve never tried before. The Town Hall “Loaded Fries”($9) are sprinkled with cured duck egg yolk, aged goat cheese, truffle-balsamic. How can you sprinkle duck egg yolk you might ask? The duck egg yolk is dehydrated then grated up over the fries to add a nice touch and unexpected taste that perfectly matches the sharpness of the cheese and acidity of the truffle balsamic. 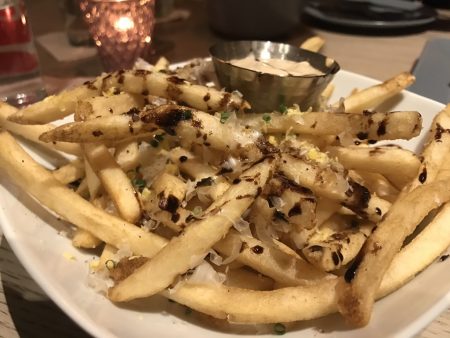 We always ask our server to share with us their favorites on the menu and the most popular item on the menu. Our server recommended the grilled cheese sandwich($10) fontina, prosciutto, black truffle butter. This likely would have been the last thing we would have ordered but our server was over the moon about it so we ordered it. The sandwich comes quartered so that it’s easy to share as an app. You’ll laugh when we tell you this might be the one appetizer you don’t want to miss. Beautiful rich cheese meets buttery goodness and a crispy slice of prosciutto really adds something special in the middle. We loved it! You’ll love it too! 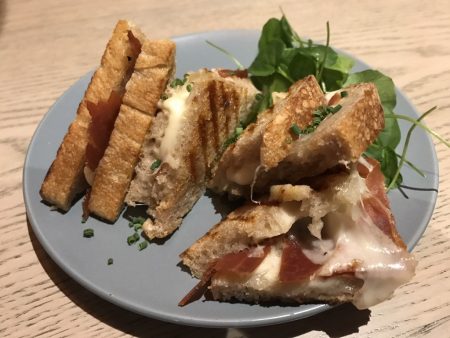 We’re die hard octopus fans so if it’s on a menu we order it 100% of the time. Town Hall’s Seared Octopus($14 soppressata gremolata, red potatoes, lemon yogurt, crispy chickpeas) may just set the bar for octopus in Jax. It’s tender, and paired with a unique variety of textures plus flavors that nicely layer to add to the octopus without overwhelming the flavor of the octopus itself. 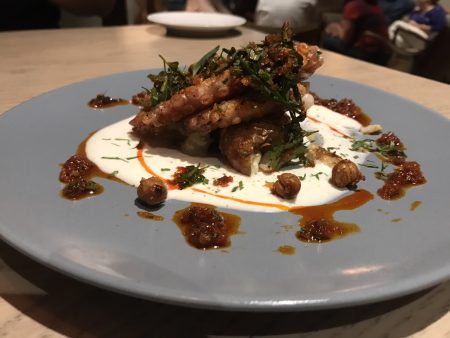 One of the questions I get constantly asked is “Where can I get a great steak in Jax?” There aren’t a lot of good answers to that question. I used to just send people to 3 Forks because even though it’s a chain they consistently deliver a high quality steak prepared well and they have variety. More recently I had a chance to try Orsay’s filet mignon and it’s top notch. Now if I’m asked, “Where can I get a great new york strip?” I’ll send people to Town Hall.  The New York strip($27) at Town Hall was obviously high quality and cooked perfectly to temperature. The end pieces had a nice crispness to them without having any sort of smoky or slightly burnt taste that too often restaurants are willing to trade in order to accomplish this texture. The al pastor style it was prepared in was refreshing, the chimichurri was a perfect accompaniment and the mushroom conserva and shishito peppers nicely complemented the meat without being overwhelming. This is a dish we would come back for!

Like I think most folks in Jax, we’re always fans of housemade pasta so the Housemade fettucini($14)- beef + pork sugo, housemade ricotta, chili oil sounds like a treat. It definitely is the treat we had hoped for. The portion size is a bit small(although at $14 it’s the most affordable main course.) but it’s packed with flavor and you won’t be sorry if you order it. 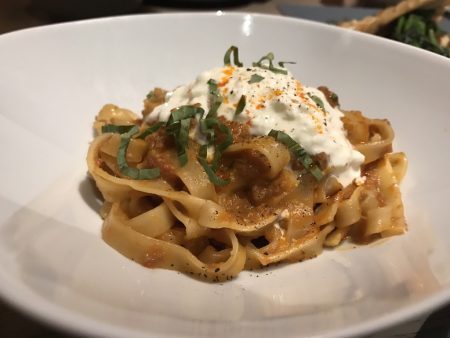 Sides are often simply treated as rather unimportant at restaurants these days and the quality and stand out style of Town Hall’s sides may just be one of its most appealing aspects. From the “loaded fries” we already discussed to the crispy brussels sprouts served with pepper jelly or served as an appetizer topped with fried duck egg, nigella seeds, and bonita flakes that give it the appearance of being alive as they’re blown by the steam of the dish to the manchego bread pudding that we’ve never seen offered on a menu in Jax to the most indulgent whipped potatoes with black truffle butter….the sides at Town Hall are truly stars in their own right on a menu full of stars.

For us the one portion of the menu that feels like a bit of an afterthought is dessert. There are 3 options: apple cake(which eats a bit like a cross between a pie and a cake), chocolate pot de creme, and seared pound cake. We weren’t fans of the chocolate pot de creme. The apple cake was good but kind of small for $7 in our opinion. The seared pound cake was sheer perfection. 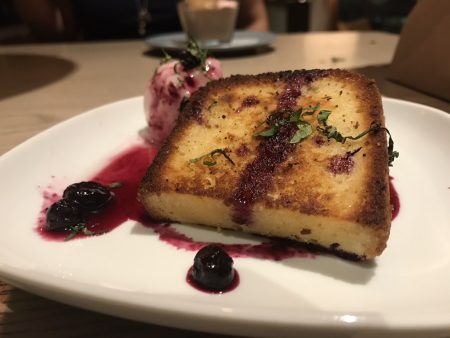 The service at Town Hall was in the top tier of all service we’ve had in Jax. Drinks stayed full. Dishes came as ordered. The servers had great recommendations. The servers were exceptionally knowledgeable about the food. What more could you want?

To say we were impressed with Town Hall is the ultimate understatement. Collectively 4 different members of our team made 3 different trips to Town Hall in the first 2 weeks the restaurant was open. Every single person was flat out blown away. I’ve personally been to a few dozen or more restaurants during the first week they were open. I’ve never seen one execute at a level comparable to Town Hall. If they don’t make every top 10 list in town it will be because the creator of the list hasn’t eaten there yet. 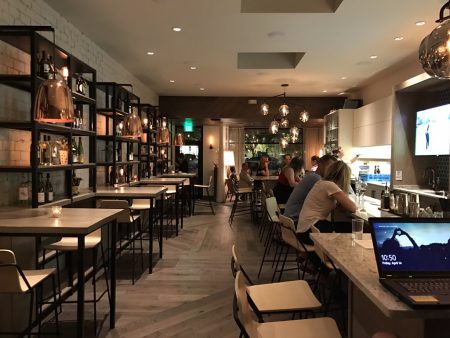