Linda’s Wooden Spoon is a blink-and-you’ll-miss-it eatery on Atlantic Blvd in Arlington. Sparse but warmly decorated, Linda’s offers homecooking with both breakfast and dinner served all day. On our excursion we had both breakfast and lunch, along with some dessert.

We started with biscuits. We ordered them as a side and they came out first, which was just as well. Why are good biscuits so hard to find in Jax? Linda’s biscuits were noteworthy. For starters they were huge, almost the size of saucers. They were perfectly golden on the outside, soft on the inside. These biscuits are the real deal. You can also order a breakfast sandwich on them. We opted to enjoy our biscuits the way God intended, but you have options. 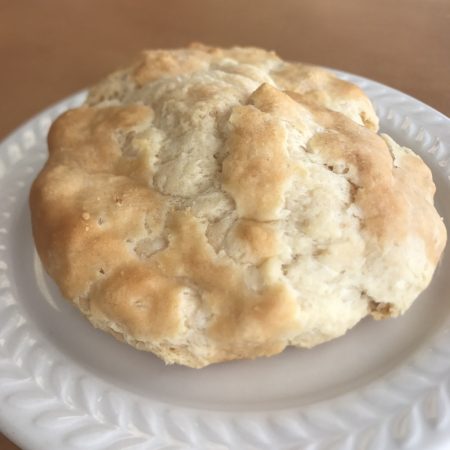 For breakfast we had a veggie omelet and a meat omelet with grits ($7.99 each omelet). The veggie omelet comes with onions, peppers, spinach, tomatoes, and mushrooms. We omitted the the onions and peppers for allergy reasons, but appreciated the variety of other veggies offered. The meat omelet was stuffed with bacon, ham, and sausage. The omelets were obviously prepared with care. They were perfectly symmetrical, folded nicely with the veggies/meats and a little cheese distributed throughout. They were plenty big with a generous amount of fillings. The grits were your standard slippery, diner grits. They weren’t memorable. 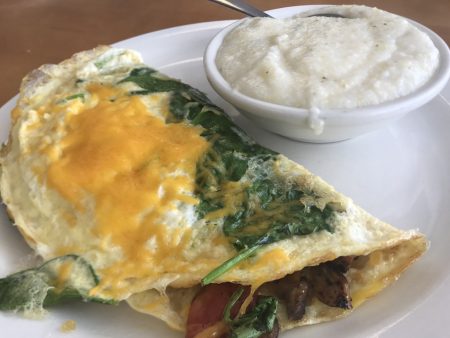 For dinner we had country fried steak, loaded baked potato, and broccoli ($8.99). The country fried steak was quite good, but the gravy on it stole the show. We enjoyed dipping bites of biscuit in the gravy, and there was plenty of it to spare. The loaded baked potato had a treasure trove of perfectly crisp bacon inside. This is not the paper thin Waffle House bacon. This is thick, quality bacon. Everyone should make their bacon this delicious. The broccoli was perfect due to what it lacked. Namely, butter. This broccoli was cooked perfectly, not one second over or under cooked. It was just freshly steamed broccoli. 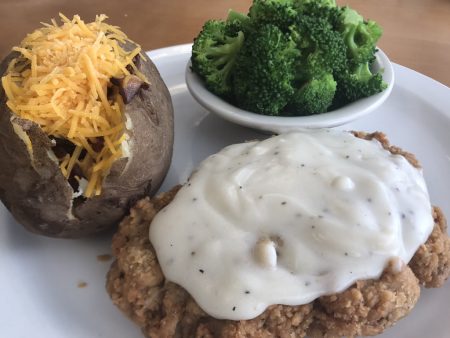 One of the specials listed was grilled pound cake with fresh strawberries ($2.50). Grilled or seared pound cake is a dessert we’ve seen on fine dining menus lately, mostly for about triple the price of Linda’s, so we had to have it. I hope it goes on the permanent menu because it was darn good. It was actually the best grilled pound cake we have had, including the iterations at fine dining establishments. It was warm and sweet with a sprinkling of powdered sugar on top, with fresh ripe strawberries. 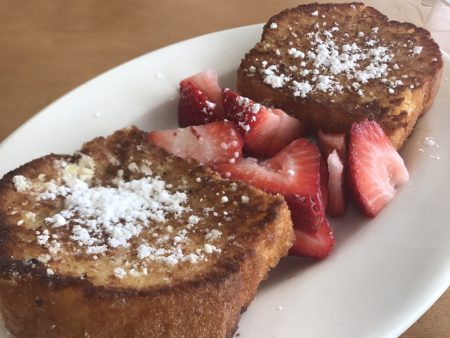 What stood out most at Linda’s Wooden Spoon was the way the food was prepared. So often at diners and homecooking restaurants, “homecooking” is short for “drenched in butter”. That’s a cheap way to improve the taste of food without putting the time or care into preparation. Linda’s Wooden Spoon serves true homecooking style food. Nothing is drowning in oil or butter; it tastes how it’s suppose to taste, like food. You can tell that while nothing is extravagant, it is made with care. Thought was put into the menu and is put into each dish as it’s prepared.

The service at Linda’s Wooden Spoon was honestly touching. There was one woman covering all the tables (there were about 5 or 6 tables occupied at any given time). She knew several of the guests and talked with them about them. She was helpful and on the ball, but mostly she was genuinely hospitable. Even the guests she didn’t know she personally welcomed and calmly went over the menu with. If you want hope that there are good people in the world, go hang out at Linda’s Wooden Spoon.

We started Jax Restaurant Reviews to get the word out about small, locally owned restaurants in Jacksonville. Linda’s Wooden Spoon is exactly the kind of restaurant we love to have in our community.