Now 200+ reviews into this food reviewing journey, it’s not often that I’m truly wowed by a restaurant.  But this week Empire City Gastropub absolutely blew me away.  Chef Korey Konopasek, owner of the popular gourmet burger spot Epik Burger, opened his new gastropub concept Empire City this week in The Shoppes at Harbor Village, which most of us know as “The Fresh Market shopping center” located where San Pablo Road intersects with Atlantic Boulevard.  Empire City, like the city it’s named after, offers flavors and dishes from all over the world.  From Irish to Korean barbeque to Czechoslovakian fare Empire City has a little of everything.  Normally when a restaurant decides to be all over the map rather than stick to one area, they end of serving up a lot of mediocrity.  This is definitely not the case with Empire City.  In the two visits we made to Empire City we were flat out wowed.  From service to food to selection, each area was top notch.  And keep in mind this was the restaurant’s first week in business! 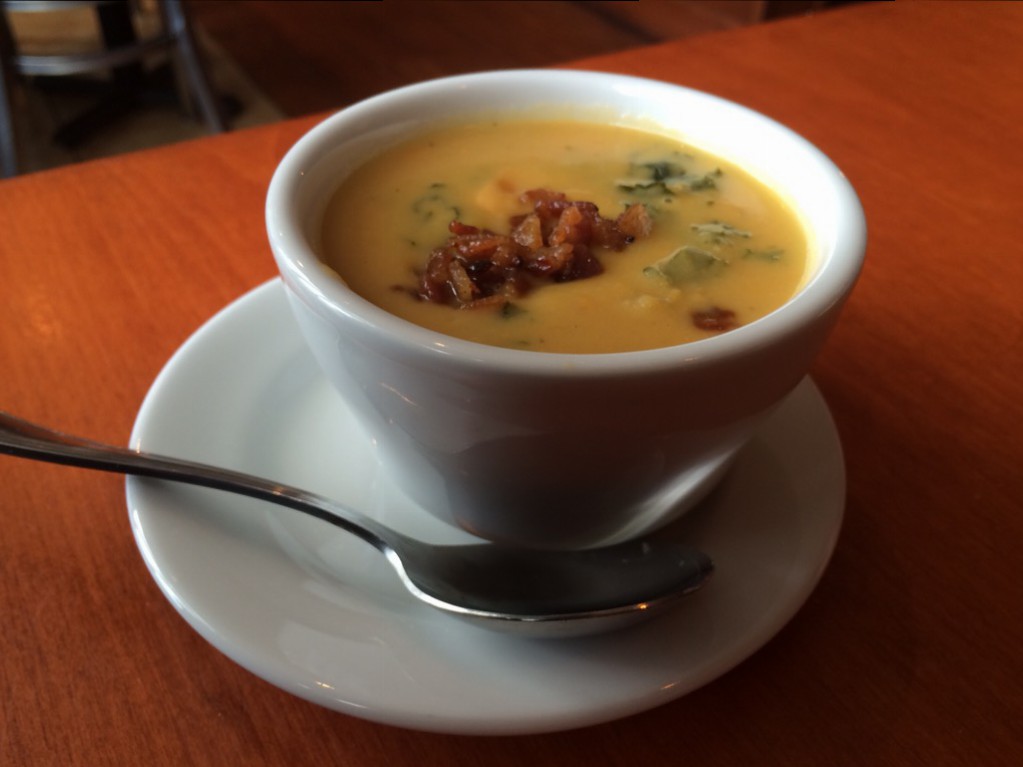 The first appetizer we tried was The Nacho Stack ($14 freshly fried tortilla chips, shaved angus steak, salsa, sour cream, diced avocado, pickled jalapenos, red onions, half pound of melted cheddar).  This dish was the worst dish we’ve tried at Empire City and it was actually pretty good.  The meat and toppings tasted very good but they weren’t spread out particularly well so it was kind of clumpy.  You’ll enjoy it, but probably not as much as the other apps. 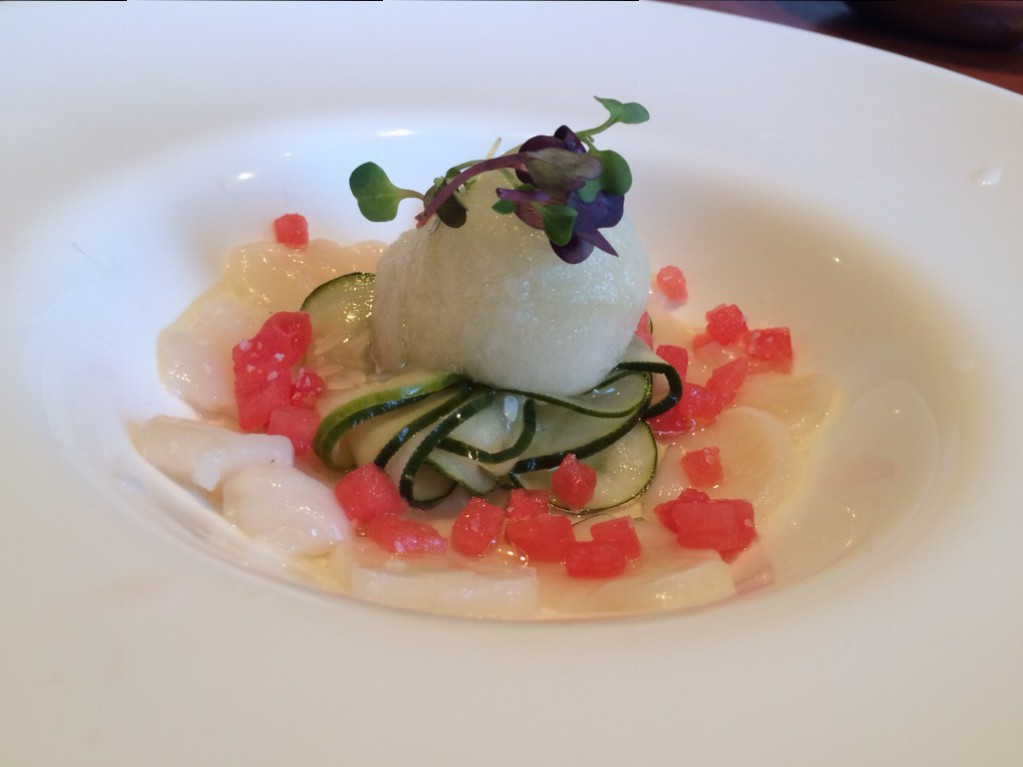 The Scallop Ceviche ($12 giant scallops, lime sorbet, watermelon) at Empire City is flat out fantastic!  It reminded us a lot of Restaurant Orsay’s scallop tartare but with a different flavor profile and larger pieces of scallop.  Each bite has a bit of sweet from the watermelon, a hint of saltiness and a bit of sour from the lime sorbet.  This dish might just rank among our favorite appetizers in Jax.  Make sure to get a bit of each component in each bite to experience all the flavors.

When it was time for main courses we took a swing at the Duo of Beef ($29 angus beef tenderloin medallions cooked rare via sous vide, braised way beef, blackberry demi-glace, vanilla bean mashed potatoes, seasonal vegetable).  The two styles of beef offered up completely different textures, with one having that melt in your mouth texture that waygu should have and the other a smooth texture of its own.  This is the dish to eat if you really want to feel like a true carnivore.  The blackberry flavor was mild and not too pronounced.  The vanilla bean mashed potatoes had a vanilla flavor you couldn’t miss without being overly sweet. 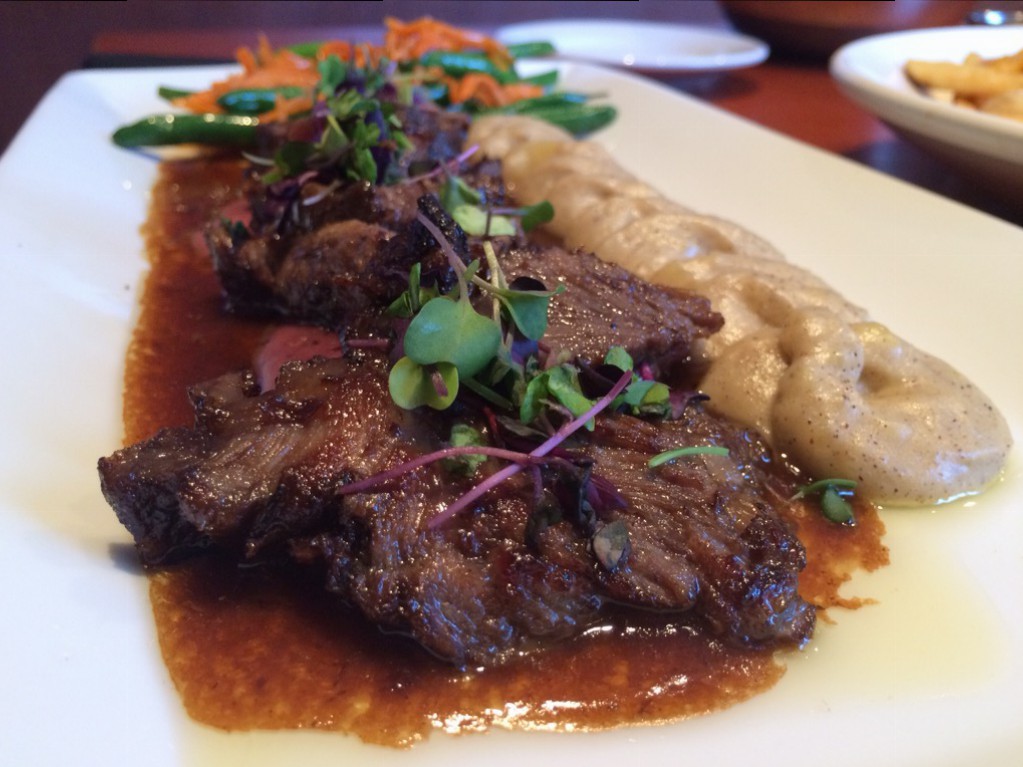 The next entrée we tried was the Chicken and Dumplings ($21 1/2 of a roasted chicken, Czech plum stuffed dumplings, mustard gravy, roasted vegetables).  The chicken was cooked perfectly with every bit of juiciness and flavor you could want from a chicken dish.  The most intriguing part of the dish though was the dumplings.  We asked Chef Korey how they came up with the idea for the dumplings and he shared with us that his father, who is in his 90’s, asked for Korey to make dumplings like the ones he had growing up stuff with plums.  Korey asked one of his cooks whose mother makes a similar dish for a sample and tips from mom and put together his own version for his dad.  They were so delicious and unique that he decided to put them on the menu.  We thought they were great!  This dish takes something as run of the mill as roasted chicken and adds excitement and flavors we don’t often see to create something we’d recommend you try.  I’d be astounded if anyone didn’t enjoy this dish. 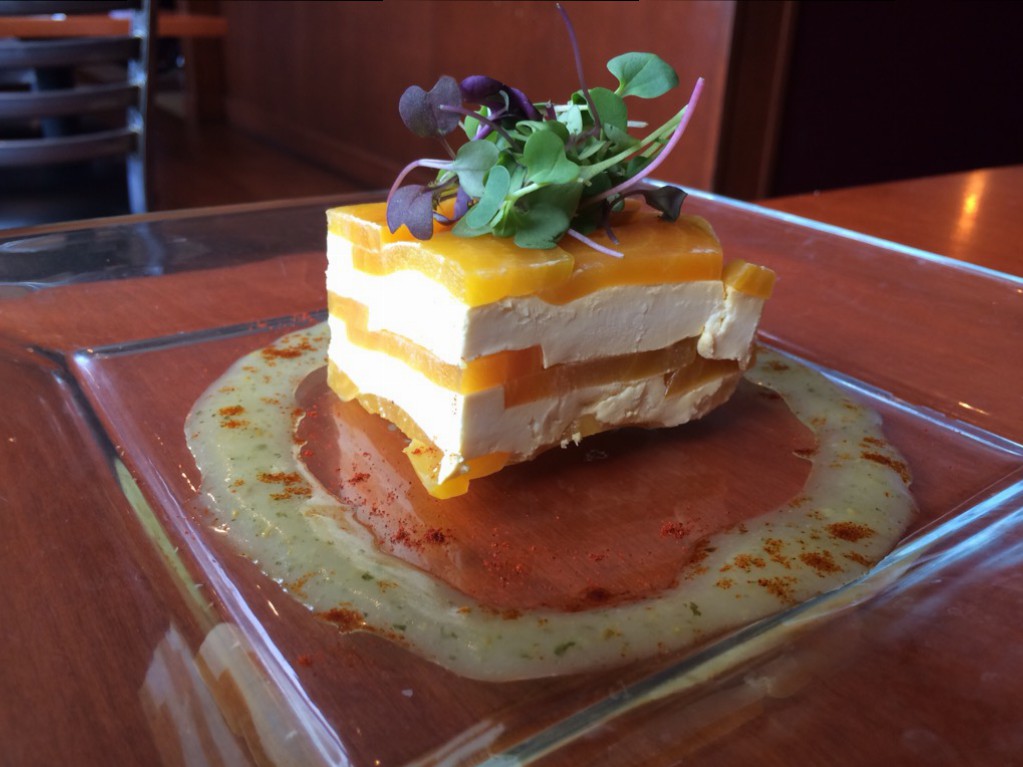 The next entrée we tried was the Waygu Bi Bim Bop ($23).  Bi bim bop is a traditional Korean BBQ dish rice, beef, veggies, egg, kimchi (Korean style pickled veggies) among other things into a hot pot where you stir things up and enjoy.  Korean BBQ happens to be one of my favorite styles of food so I’ve had bi bim bop all over the country.  Empire City’s bi bim bop is a very solid contender.  I doubt you’ll find this caliber of dish anywhere else outside of a Korean BBQ restaurant.  The dish is served in the traditional style with the egg nearly raw on top of the bowl.  When you receive the hot pot and stir the egg into the bowl, the egg finishes cooking from the heat of the pot.  This gives you a nice even distribution of egg and avoids the giant chunks of egg that result when the egg is fully cooked prior to arrival at the table.  If you’re a bi bim bop fan or you’re an adventurous eater and want to try something new we’re confident you’ll enjoy this dish.

Last but not least we tried the Drunken Mac n Cheese ($14 cavatappi pasta, beer cheese sauce, sharp cheddar, bread crumbs).  When the bowl arrived at the table it looked like it might have been a bit dry.  When we mixed it all together and took the first bite it was creamy, cheesy, dreamy, deliciousness that could rival any mac n cheese in town.  As a true lifelong mac n cheese lover I’ve gotta to say this stuff is top notch!  If you don’t like this one you don’t know good mac n cheese. 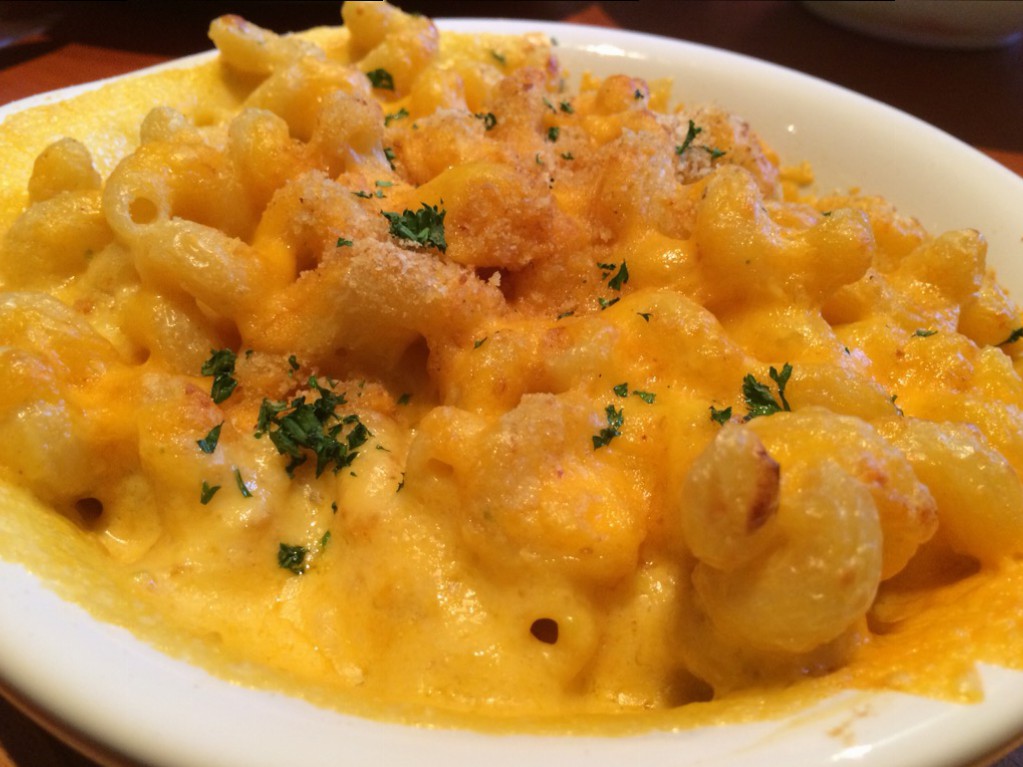 For this review I actually combined 3 visits into one and covered the majority of dishes we tried.  We happen to know the chef/owner here and chatted with him and learned more about the restaurant on each visit.  The service we received was top notch on all 3 visits except for on one visit our waitress took our drink order and forgot to bring the drinks.  The owner noticed our drinks weren’t on the table and quickly helped the waitress to remedy the mistake.  Throughout all 3 visits the owner walked the dining room periodically and made sure everyone was well taken care of.

I’ve been to a ton of new restaurants during their first week or two since we started this blog.  There are usually some major hiccups and some dishes that really miss the mark while others are very good.  On our visits to Empire City we didn’t find a single dish that we didn’t enjoy.  The preparation, presentation, and completeness of each dish was some of the best we’ve seen during a restaurant’s first month.  Empire City Gastropub should be a strong contender for best new restaurant in Jax this year.  This restaurant is as polished as any new restaurant we’ve tried.  You NEED to go give it a try.  You’ll be glad you did. 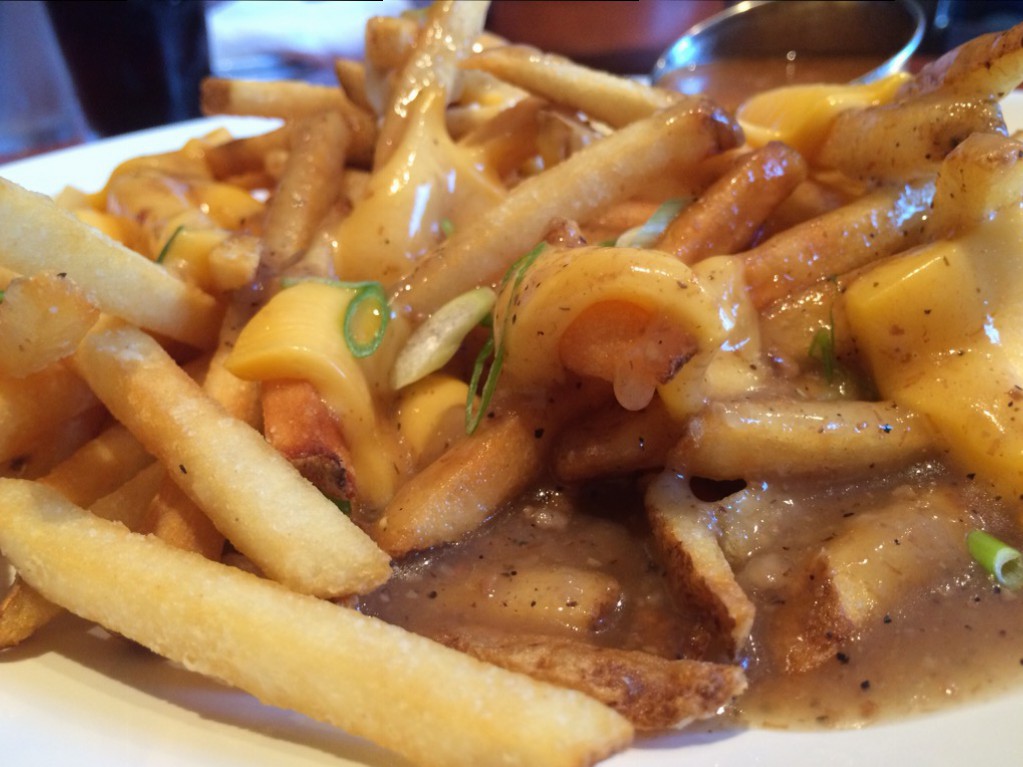