In addition to the awesome gig of exploring and tasting Jacksonville’s growing food scene, from time to time we also get the opportunity to sample various food products.  Recently, we were asked to try out Redd’s Apple Ale.  You may have seen Redd’s Apple Ale on store shelves and you may have even tried it yourself.  Until we were given a six-pack to try out, I personally had not tasted Redd’s Apple Ale.  To be honest, I have passed by Redd’s Apple Ale in the beer section of our local grocery store many times and had never even considered buying it.  It isn’t the type of drink I would normally go for. In fact, I am not usually a huge beer drinker at all.  So when we were asked to give this apple beer a try, I was definitely intrigued and I did my best to keep an open mind (and an open palate). 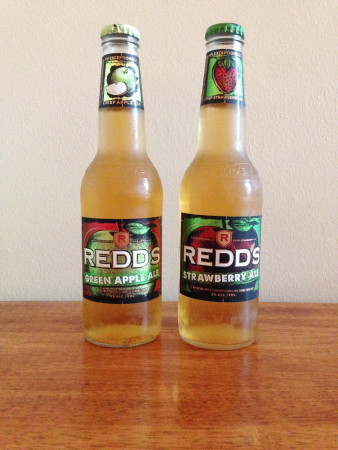 First off, just to clarify…Redd’s is in fact beer.  Some folks might assume that it is a cider thanks to it’s strong appley taste, but it is brewed like a beer rather than being fermented using apple juice like a cider.  Redd’s was first launched in 2012 and became available nationwide in early 2013.  Since then a few different flavors have been added to the Redd’s lineup.  We were asked to try three different flavors – Strawberry, Green Apple, and Apple (also referred to as “original”).

We were eager to try the Redd’s Apple Ale, so we made quick work of opening up a couple of bottles shortly after they arrived at our doorstep.  Therefore, it was not as cold as I would have liked.  Because of that, I was not a huge fan at first.  In its semi-lukewarm state, it tasted like really weak beer and had very little fruit flavor.  Obviously, leaving it in the refrigerator to get colder would have been a good call.  It was suggested that we try Redd’s with Mexican food, so we left the remaining bottles in the fridge to chill while we whipped up a taco feast fit for a king.  Chilled, the Redd’s Apple Ale was much tastier and much more refreshing.  The ice-cold temperature brought out a lot more fruit flavors and made it much more enjoyable. 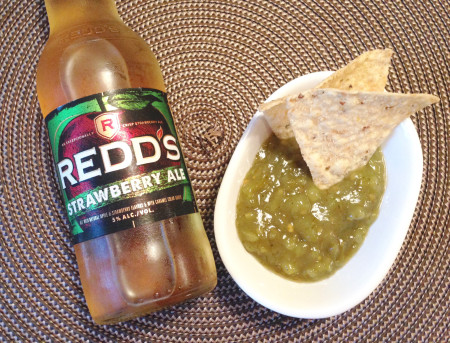 There is a nice fizz to the Redd’s Apple Ale that dissipates quickly, so the carbonation is there, but isn’t overly in-your-face.  The original apple flavor was decent.  It had a nice apple taste to it and wasn’t too sweet.  The flavor did come across as a little one-note though – it wasn’t really interesting enough to prompt me to drink it again and again.  The strawberry, on the other hand, was a little more flavorful, but was too cloying for my taste.  The strawberry flavor came across very strong and way too sweet for me.  The green apple was definitely our favorite of the three flavors we tried.  It had a crisp apple taste to it, but did not come across as too sweet or sugary.  It was especially good alongside our tacos and spicy jalapeno salsa.  The slightly tart apple flavor balanced the spicy Mexican flavors nicely and was very refreshing.  At first I was skeptical about pairing an apple beer with tacos and tamales – I usually prefer a good margarita alongside such fare.  So I was pleasantly surprised to find that the Redd’s Apple Ale worked so well with our Taco Tuesday spread.

Overall, we did enjoy the Redd’s Apple Ale that we tried.  The green apple was especially good.  Would we drink it again?  Yes.  Would we seek it out and purchase it specifically?  I don’t know – maybe.  As far as flavor and carbonation goes, it falls somewhere in between a wine cooler and a beer.  So it is sort of a unique twist on the two, and not one that I would necessarily gravitate towards on a regular basis.  But, if you’re looking for a fun, refreshing middle ground, Redd’s Apple Ale is worth a try. 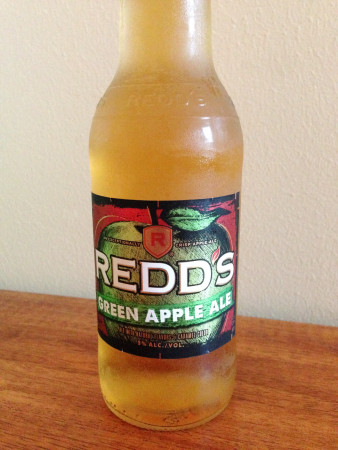