Located on Ocean Street directly beside 1904 Music Hall, Spliff’s Gastropub is one of the newest additions to bustling downtown Jacksonville.  Spliff’s is serving up gourmet comfort food and plenty of rotating beers on tap that make for a diverse spot for a quick lunch, a dinner with friends, or a late night food run.  We visited with them recently and after a few tastes of their menu we knew we had to have a Food Adventure here to showcase the delicious and decadent foods to our Food Adventurers.  The newly appointed Executive Chef Cassie Romines took time to meet with us to explain what she will be bringing to Spliff’s and to give us more details on why this humorously themed gastropub is standing out from the rest. 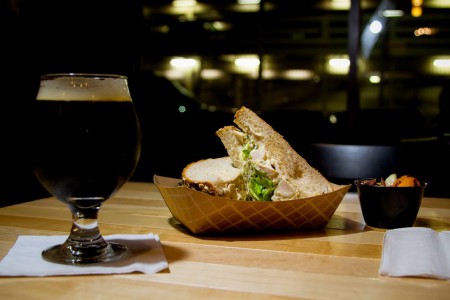 Chef Cassie grew up spending lots of time with her grandmother in her kitchen.  Her grandmother cooked frequently, so from the moment that Cassie could reach the stove she began cooking herself breakfast.  Cassie’s mom was a single parent, so when she would get home from work Cassie wanted her mother to be able to relax and not have to come home hungry, so Cassie learned how to cook more complicated meals very quickly.  Cassie told us, “Cooking feels like home to me, it’s my serenity.  I even do baking and pastry items on the side, I’ve done that for about a year now.  I do custom cakes for friends and family outside of work, and they’ve been so successful that I make cakes here now.”  Prior to working for Spliff’s, Cassie had always worked in food service to some degree.  Her very first job was with Miami Subs before transitioning to Winn-Dixie.  She found herself at the Walmart deli, where she became proficient at cake and pastry decorating.  She soon moved to Publix to do cake decorating for them before she took a year off to have her third son.  On returning to work, she worked for PDQ before transitioning to Candy Apple Cafe and Spliff’s simultaneously.  Until very recently, Cassie was splitting her time between both restaurants and getting the best of both the upscale restaurant experience and the homey, down to earth Spliff’s.  Cassie had a tough decision to transfer to Spliff’s full time but she knew that it felt right and that she had the opportunity to progress and run her own kitchen.  In addition to her wealth of experience in local food service, Cassie graduated from The Culinary Institute of Jacksonville in 2014 with a 3.5 while balancing her at home family life with three children and her husband. 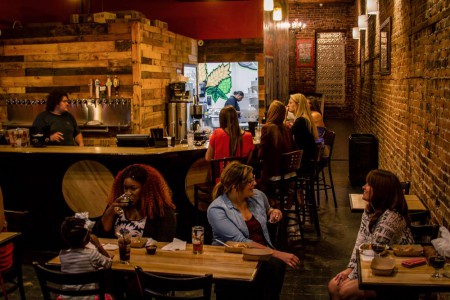 Post graduation, Cassie shared with us that she didn’t realize how difficult being a female chef in a male dominated industry could be.  That made her feel even more honored to rise to an executive chef position so quickly.  “I see so many sous chefs that are women but I have not seen many female head chefs.  So, I want to show that we can work hard and we can do this, we can be just as good.  I didn’t think for the longest I would ever get anywhere.  I worked so hard.  Someone finally noticed that and that I’m smart and I can cook, I can order, I can lift 50 lb boxes.  Someone gave me that chance and then someone else gave me a better chance and it just keeps moving forward and forward for me.  It’s crazy that one day I decided ‘you know what, I’m going to be a chef’.  Then all of a sudden I was a sous chef, and now I’m a head chef, and now it’s going quite nice.  One day maybe I’ll own my own business.” 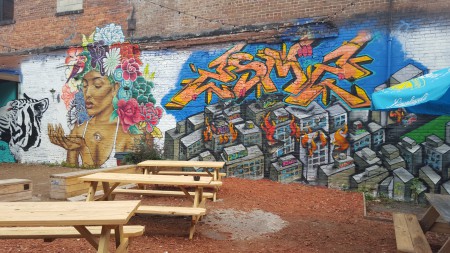 As for Spliff’s itself, the restaurant had their grand opening on November 7th, and Cassie and her team have been adjusting to a busier and busier daily routine.  The aptly named “food and drink joint” serves up “Spliff pockets” (homemade hot pockets!), appetizer “munchies”, gourmet mac and cheese, and sandwiches such as “The Homegrown” with hummus, vegan mayo, avocados, and a litany of veggies.  Feeling more like a carnivore?  Try “The Ziggy” with pastrami, salami, provolone, and just as many fresh veggies as “The Homegrown.” There is a little something for everyone at Spliff’s.  Cassie told us, “We are comfort food at its best, and it’s all made from scratch.  We stuff our own pockets, we make our mac and cheese, we cut our own vegetables, we make our own sandwiches.  We aren’t using pre-made ingredients.  We also make all our own sauces.  Our most popular menu item is our macaroni and cheese.  We use curly noodles and our cheese base is smoked gouda and sharp cheddar with a kick.  When you get a mac and cheese entree it uses panko and cheddar and butter.  It’s like being at home.  It comes in this huge bowl and it’s hot and fresh.  Most people can’t even finish it.  On top of that, you can add great extras to it.  We have broccoli, chicken, tri-tip, cheese, and more cheese.  It’s nice and fun for people to see it because they can customize it and make it their own.” 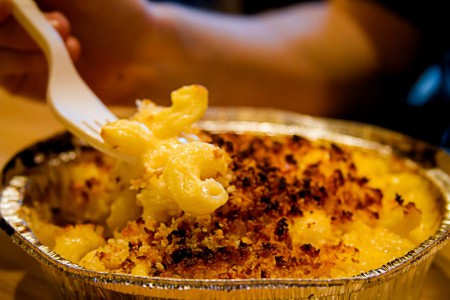 Cassie has also brought in her dessert skills to expand the menu at Spliff’s.  Originally, Spliff’s wasn’t going to do dessert until Cassie began to bake daily dessert specials.  There is no set daily dessert menu, Cassie simply bakes whatever she is in the mood to create that day.  Her chef creations so far include cookies, cakes, cheesecakes, and rice krispie treats.  The former chef started the rice krispie treat dessert and Cassie has carried that through as a special, although the most popular dessert so far has been a decadent chocolate cake with chocolate frosting.  Cassie has also been creating weekly savory specials for the menu as well, and they have been a tremendous hit.  Most recently she used her love of Asian food to bring in a pork belly slider with teriyaki sauce and Asian slaw that was modelled off of a portfolio item she used very successfully in culinary school.  They were so popular at Spliff’s that Cassie sold out of her entire supply of pork belly in 3 days. Cassie has an enthusiastic outlook for Spliff’s and the future of the Jacksonville dining scene.  “We’re growing,” said Cassie, “I can remember when I was younger there wasn’t much around.  The more that I’m downtown and the more I talk to people who come down here the more I know we are in the right place.  There are a lot of restaurants that you just didn’t know were there until someone tells you.  Before a few years ago, we had McDonalds and Burger King and that’s what was on every corner.  Now I can go out and get a great burrito or Italian food.  There were so many chains because it was fast, cheap, and easy.  As a parent I know that sometimes you just don’t feel like cooking.  And that is what is great about local restaurants like Spliff’s.  I can bring my kids in here.  My husband comes here.  I can have a home cooked meal outside my house.  I’m hoping in the future we have more places like this where we feel home.  You don’t have to be dressed up to go out and have a good meal.  I also hope that downtown keeps growing, for the longest there was nothing to do in downtown except work.  I think within five years downtown will be the place to be.  When I was younger everyone went to the beach.  But nationally so many downtowns are busy.  People should want to come here now because there are things to do, and you can experience new things.  Look at the success of Art Walk, that just shows you what people want.  They love that experience, and we should be a the epicenter of it within five years.” 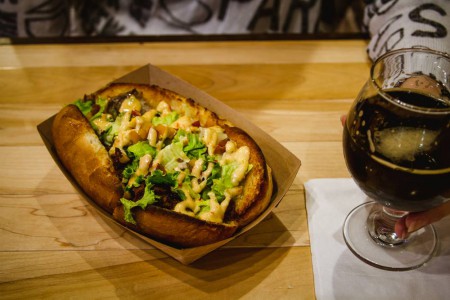 To provide for their varied customer base, Spliff’s is open six days a week from lunch through late night.  Cassie works long hours serving her customers and making sure everyones experience is nothing short of stellar.  In her free time, she loves to spend time with her children.  Her favorite thing to do is instilling her love for food and the culinary world with them by playing in the kitchen, even if it’s just making jello.  Cassie was radiant when talking about her family, and happily told me, “They’re amazed that Mommy can make stuff and let them get messy in the kitchen and create things.  My daughter especially loves to cook, but my youngest just likes to make a mess.  I love that they want me to cook for them.  You make your kid this special grilled cheese sandwich and cut it the way they want and plate it the way they want.  That melts my heart, that’s where I love to be and that’s where I love to spend my time.”  Chef Cassie is putting the same love and passion that she puts into feeding her family into feeding her extended family at Spliff’s Gastropub.  Each handcrafted menu item is fresh, innovative, and delicious.  Spliff’s may be flying under the radar now, but they will be a go-to downtown destination very soon with the care and creativity that they’ve put into their menu and restaurant.  Join us on March 20th at 7 pm to enjoy a six-course Food Adventure created by Chef Cassie that will be sure to satisfy all your comfort food cravings.