Wine Cellar is an old fine dining staple.  Located on the Southbank, it has been a go to place for those celebrating special occasions for over 40 years.  For us this was a first trip to the long time Jacksonville staple.  We tried making a reservation on Open Table on a Thursday afternoon for that very evening, but the only availability listed for a reservation was 8:30pm.  We nearly went somewhere else but thought it seemed a little fishy for a weekday, so we called the restaurant just to double check that they were full and were told they weren’t busy so there was no need for a reservation.

The first thing you notice at Wine Cellar is ambiance.  The restaurant is a network of several dining rooms with a main hallway connecting them all.  It feels cozy and old world and quiet without the constant sensory input of one giant dining room. 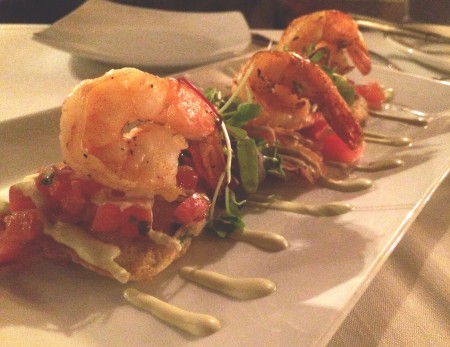 True to its name, Wine Cellar has an extensive wine list.  Being that my dining partner does not drink, I was happy to peruse the by the glass wine list.  In my experience, places that use wine as a big part of their marketing push are usually heavy on the reds and dry whites, with few lighter and softer wines to choose from.  Wine Cellar was no different.  They had nearly as many imported wines as they did domestic.  Sorry California, imported wine just tastes better…at least for this writer’s taste.

For our meal we shared an appetizer, tried a soup, chose two entrées and two desserts.  Let me dull your excitement by saying the absolute highlight of the meal was the appetizer and it wasn’t even close.  The Shrimp and Corn Cakes (pan seared Mayport shrimp served over fresh corn blini with pico de gallo and avocado crème fraiche, $10) are the newest addition to the appetizer menu.  This dish was gorgeous and it tasted even better than it looked.  I took a bite and told my dining partner that when you are trying a new food, this is the flavor you are always hoping awaits you.  It was dynamite.  It had a street food meets fine dining bent.  Wherever this dish came from, Wine Cellar needs to prime that pump and collect more inspired ideas.  Next we had the Lobster Bisque.  We wanted to love it.  Lobster bisque is delicious and this was a high end restaurant, certainly it would be nearly as good as our appetizer.  But it wasn’t.  It was just mediocre.  It was one note and that note wasn’t all that good to begin with. 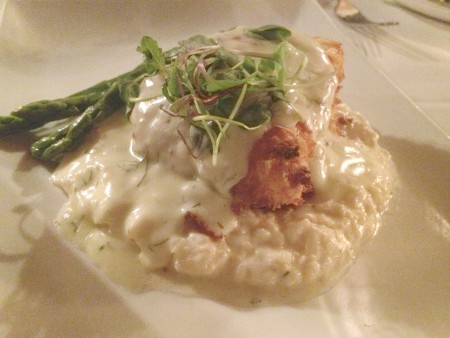 For our entrées we had the Almond Encrusted Grouper (pan seared, served with fresh asparagus and risotto du jour, finished with galliano sauce, $34) and Filet Mignon with Cherry Marsala (medallions of filet mignon topped with cherry marsala sauce, served with potato mash and asparagus, sprinkled with goat cheese, $34).  The Almond Encrusted Grouper was quite good.  The fish itself was cooked nicely, the asparagus was without any seasoning, but crisp-tender, and the risotto was creamy and delightful.  The only problem with this dish was the galliano sauce was so sweet it made the dish almost inedible after a few bites.  I started trying to eat around it as much as possible.  Galliano is a liqueur that has a vanilla-anise flavor and is made with dozens of other herbs.  It is on the sweeter side, but I did not expect to have a dessert-sweet sauce on my fish.  It tasted a bit like dessert fish.  I can’t imagine dessert fish sounds very appetizing to anyone and it wasn’t.  The Filet Mignon with Cherry Marsala sauce ($34) was served with Potato Mash and Asparagus, Sprinkled with Goat Cheese.  The steak was okay.  It wasn’t a bad filet mignon but it wasn’t near the quality I generally expect for $34 in Jacksonville.  The cherry marsala sauce was great.  The cherry aspect was just right – not overpowering.  The asparagus on this dish was somehow even more bland, but still cooked to the perfect tenderness. 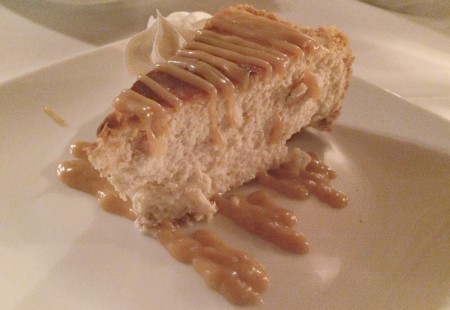 Our service was generally lackluster.  We weren’t left waiting for anything, but the level of “makes you feel special” service that you expect from an old school high end restaurant just wasn’t there.

All in all our visit to the Wine Cellar was less than we had hoped for.  A few aspects hit the mark – ambiance, wine, and our appetizer.  Unfortunately, the soup, sauce, service, and dessert all fell short.  When you go to a special occasion restaurant you expect to receive a higher level of food and service.  Unfortunately, that just wasn’t our experience at Wine Cellar.  In our book it ranks near the bottom of the pack as far as high end restaurants go. 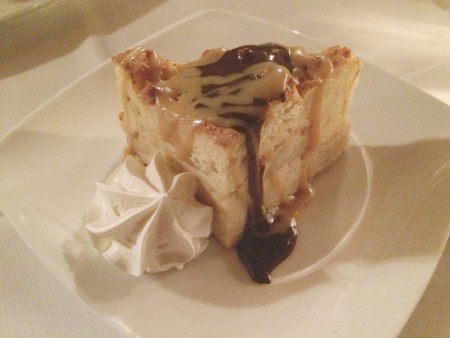