The future of Magnolia’s Pub is uncertain with it currently up for sale, but in the mean time they are open for business and serving up beer, pub food, and occasionally waffles. Magnolia’s is a super cool and fun concept: a Murray Hill neighborhood pub with prime real estate on Edgewood Avenue, serving up tons of beer both on tap and bottled, fun and funky bar bites, and a variety of sandwiches, salads, burgers, and if you can find them, waffles.

We went on a late Sunday afternoon and were surprised to be one of only three tables of diners. We went with one thing everyone talks about when they discuss Magnolia’s on our minds: waffles. But a quick skim of the menu produced zero results. There were a couple of appetizers that incorporated waffles and several waffle desserts. But where were the waffles? It turns out Magnolia’s redid their menu a few months ago, focusing it more on pub food than the waffles they were known for initially.

We asked our waitress about waffles and she pointed us to the brunch page of the menu. Apparently brunch is available all the time, but the giant brunch hours listed at the top of the page led us to skip it. We still did not find the plethora of waffle selections we had been seeking, but there were a few at least- blueberry waffle, plain waffle, or a waffle sandwich consisting of sausage patties and blueberry-orange marmalade sauce. 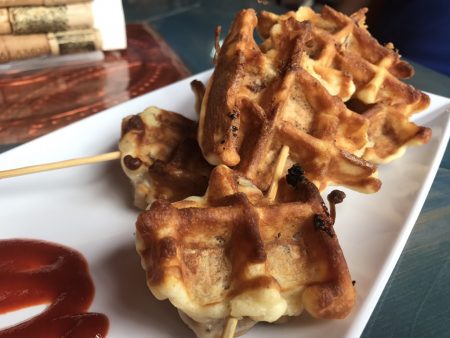 We started with a $4 mimosa, a soda, and 2 appetizers. The soda was flat- imagine a 2 liter of soda sitting open on your counter for a week. That’s what it tasted like. Terrible. We asked for a different soda and it was the same story. Our waitress said she didn’t know what to do about it. Was there no one around who can change things out on a soda machine? We’ll never know.

The two appetizers we dug into were the Chicken IN Waffle and Oreo Wonut. The Chicken IN Waffle was the highlight of the meal. It was fried chicken chunks pressed in a fluffy waffle and served on a skewer with a sriracha sauce and a spicy orange marmalade. There were two skewers with three waffle bites each. This is a great sharing dish. The Oreo Wonut was te laziest wonut we’ve ever seen. It was a waffle with Oreo in it, deep fried to simulate the donut aspect, and while the menu said it was finished with powdered sugar, it was virtually passed over with powdered sugar and perhaps a couple granules landed on it. A true wonut is a waffle made with a mixture of waffle batter and donut dough and then finished with a donut glaze, frosting or dipped in a delicious coating of some sort. This “wonut” shared only a name with a true wonut. I observed out loud, “It tastes like the fair more than anything.” That’s from the waffle being deep fried after it was pressed. I’m not saying you shouldn’t eat this or enjoy it for what it is, but a true wonut it is not. 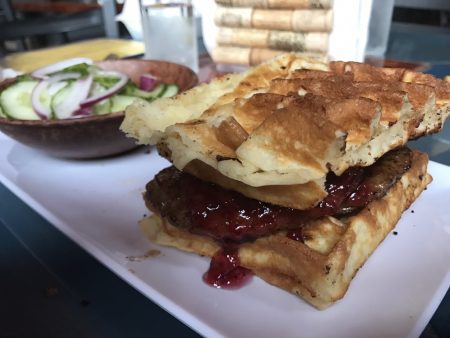 For our meals we had a Breakfast Sandwich ($9.50) and a Fried Egg and Bacon Burger ($8 as the burger of the day; normally all of their burgers run $12-$13). The breakfast sandwich was a waffle sandwich with two sausage patties and blueberry-orange marmalade sauce. It was good for what it was, but it looked and tasted incomplete. It came with a side and I chose the cucumber salad. What a nightmare of a side dish. The cucumbers were decomposing and disintegrating, which was evident as a number of them were clear. There was no sauce or seasoning of any kind, they were just sitting in water with sliced red onion. I had been assuming I would be enjoying some kind of a vinegar-y, crispy salad, but it was far from either of those things. I only wondered how it made it out of the kitchen. And how it was made in the first place. The original recipe cannot be the watery mess I was served. 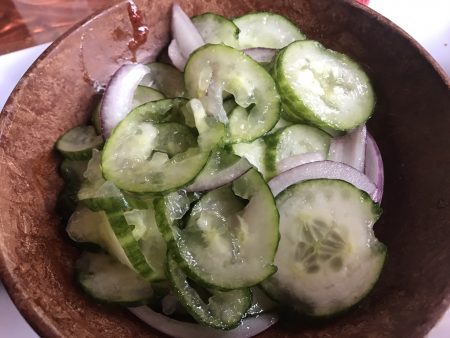 We went with the Fried Egg and Bacon Burger because it was the special and a $5 savings over the Havarti Burger we were eyeing. The burger came on giant pieces of texas toast instead of a bun. Had the menu told us this we likely would have asked for a bun and ordered something else if one wasn’t available. The toast fell apart as we attempted to eat the burger. The burger itself was good, though. It had great flavor, almost that of sausage. Would we order it again? Probably not because we tend to prefer burgers you can take a bite of and get all of the components in the bite and we definitely prefer a bun over texas toast when it’s a burger we’re eating. 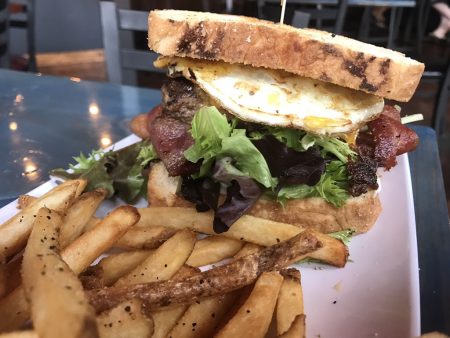 Overall our meal at Magnolia’s was lackluster. It’s a great concept that really lacks execution. If no one told you it was a beer and waffle themed spot like half of Jacksonville told us it is you would assume it was just a basic pub. The good news is there’s a lot of room for growth and a whole lot of potential if it finds a new owner to pour some energy into the place.