Most cities have at least a few run-of-the-mill, stereotypical Mexican restaurants.  You know the ones – with complementary chips, margarita specials, and sombreros hanging on every wall.  Usually the food is fine, but not stellar enough to really wow you.  Most people frequent one particular Mexican eating establishment or another part out of loyalty (after a few trips, it becomes “your” go-to neighborhood spot) and part out of a desire to eat their weight in tasty tacos for as cheap as possible. 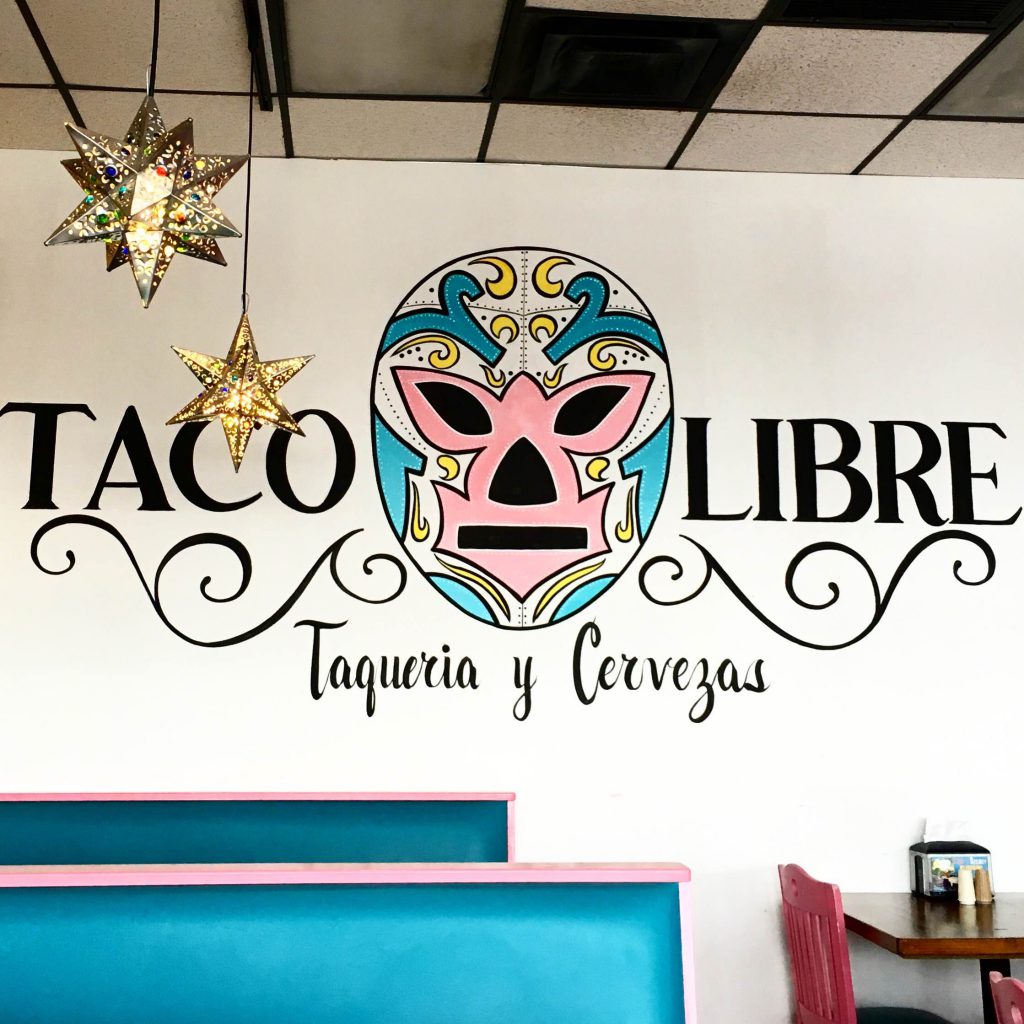 So how excited were we to find Taco Libre?!?!  It’s a hidden gem at the corner of Beach Boulevard and San Pablo that meets all the requirements of your typical neighborhood Mexican restaurant – convenient location, low prices, friendly service, and killer drink specials.  Plus it is a small, locally-owned spot, which we can definitely get behind.  We stopped in for dinner recently after having it on our must-try list for a while and we’ve already decided to make it our new go-to spot for when that craving for tacos and cheap margaritas hits. 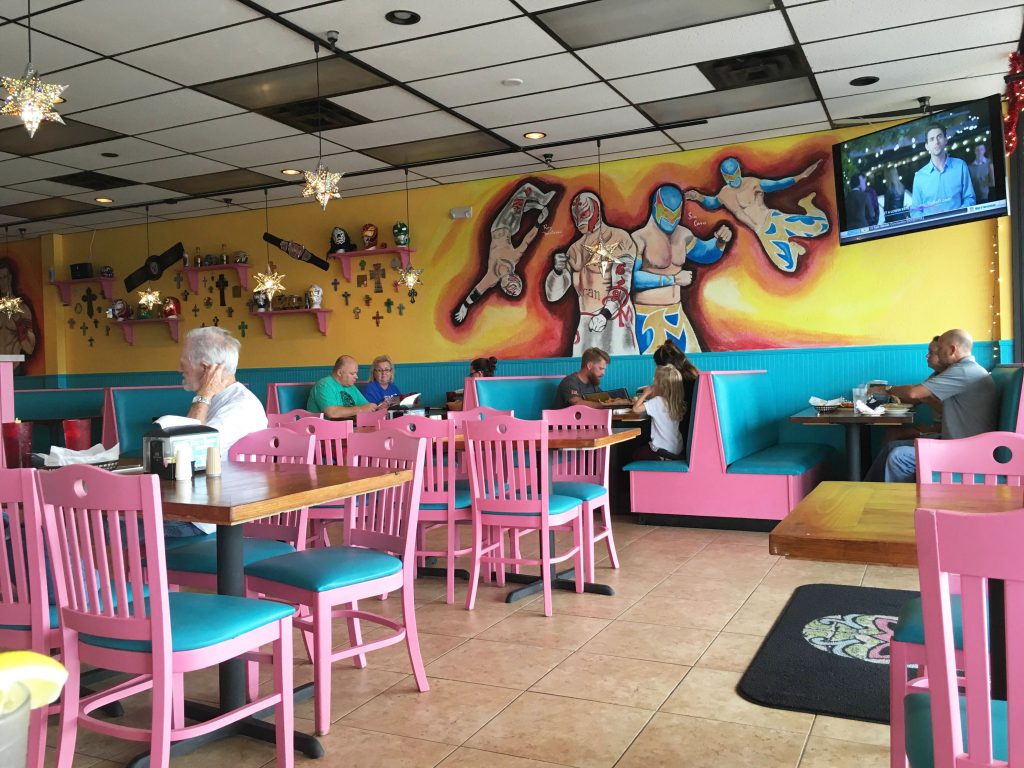 The service at Taco Libre is as warm and inviting as the space itself.  The interior is bright and lively, with a vibrant Mexican wrestling motif splashed throughout.  The wrestling masks, vintage posters, and colorful larger-than-life murals tie everything together.  The large booths are comfortable and everything feels clean and fresh.  Plus, the chairs are a vibrant shade of pink, which won over our pickiest little critic – my preschool-age little girl.  Taco Libre is just a happy, cheerful place to be and definitely qualifies as a family friendly spot. 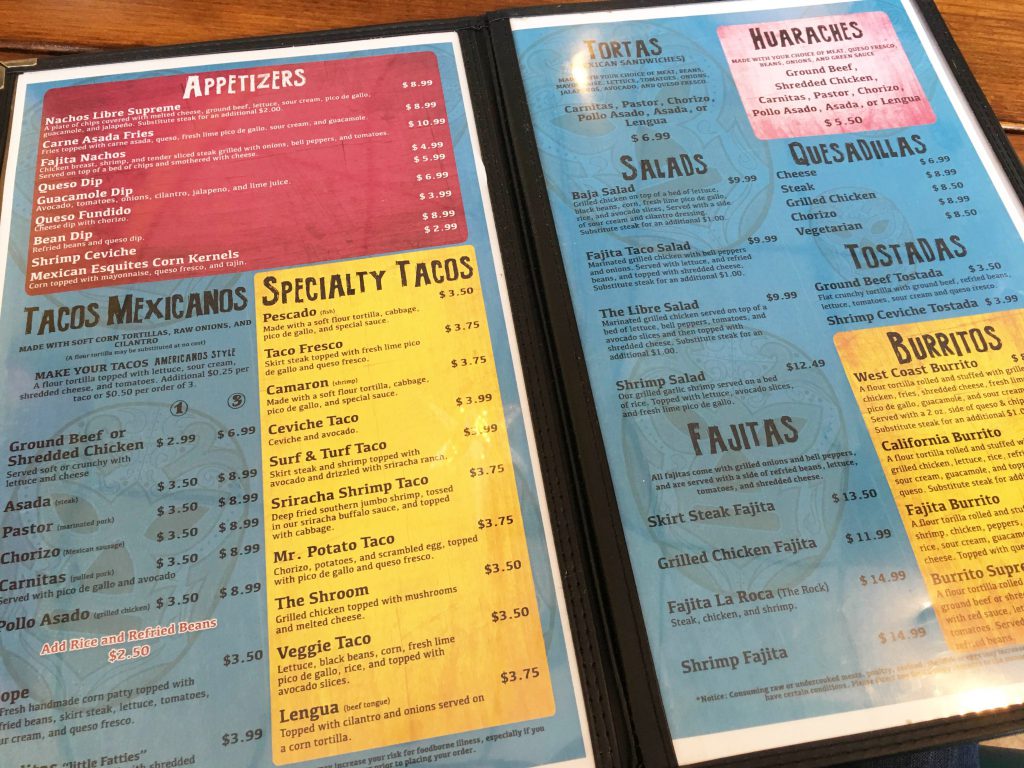 And about the food…the food is NOT your typical Mexican restaurant food.  We started out with the requisite complementary chips and queso dip ($2.99) and naturally didn’t expect anything too crazy.  The chips were indeed pretty standard, but the queso was surprisingly above average.  It was creamier than other queso we’ve had and was much more flavorful and not at all “artificial” tasting.  It was a crowd-pleaser and was a great indicator of the quality of food that we would be enjoying during the rest of our meal. 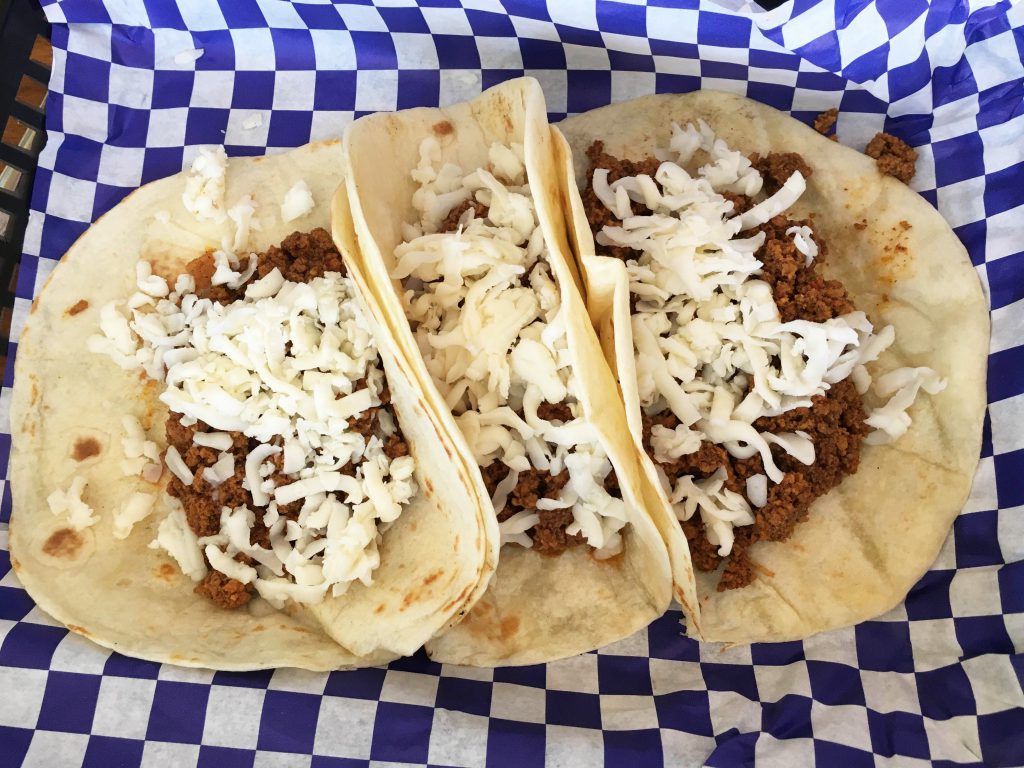 Our food came out quickly and we were excited to dig in.  The kids wanted plain tacos with just ground beef, cheese, and sour cream ($6.99 for an order of three).  They are taco purists – what can I say?  Again, these tacos were tastier than you’d expect from your typical Mexican eatery.  The meat was really well seasoned, and wasn’t overly greasy.  The flour tortillas were soft and warm and had been browned slightly on the grill.  We were pleasantly surprised by the quality of these tacos.  They were a big hit with our little foodies. 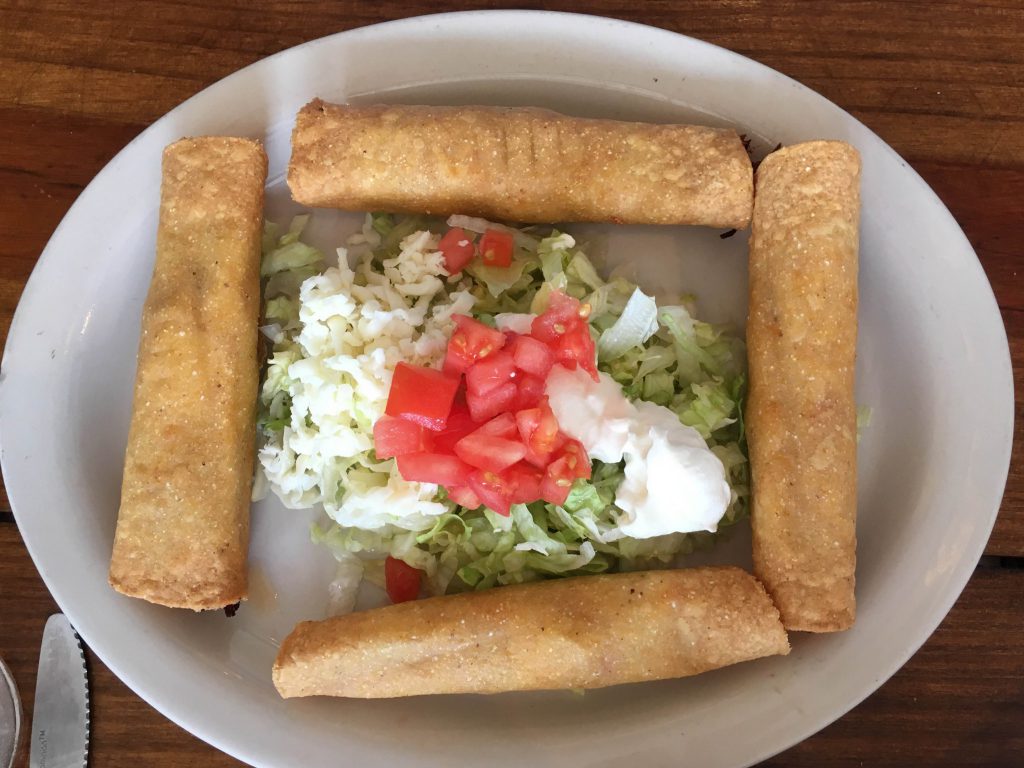 The hubby went with an order of flautas ($7.99 for four) and a Surf & Turf Taco ($3.99) for his dinner.  The flautas were good, but not incredible.  The chicken inside was well-seasoned and the outside was crispy and golden brown.  While they were good, the flautas were not our favorite and we’d probably go for something else next time around.  There are tons of tasty options on the menu, so deciding shouldn’t be too hard.  The taco, on the other hand was a winner.  The skirt steak was tender and flavorful and the shrimp were well-prepared.  The avocado on top added freshness and a nice creamy layer of flavor while the Sriracha ranch sauce gave the taco a little kick. 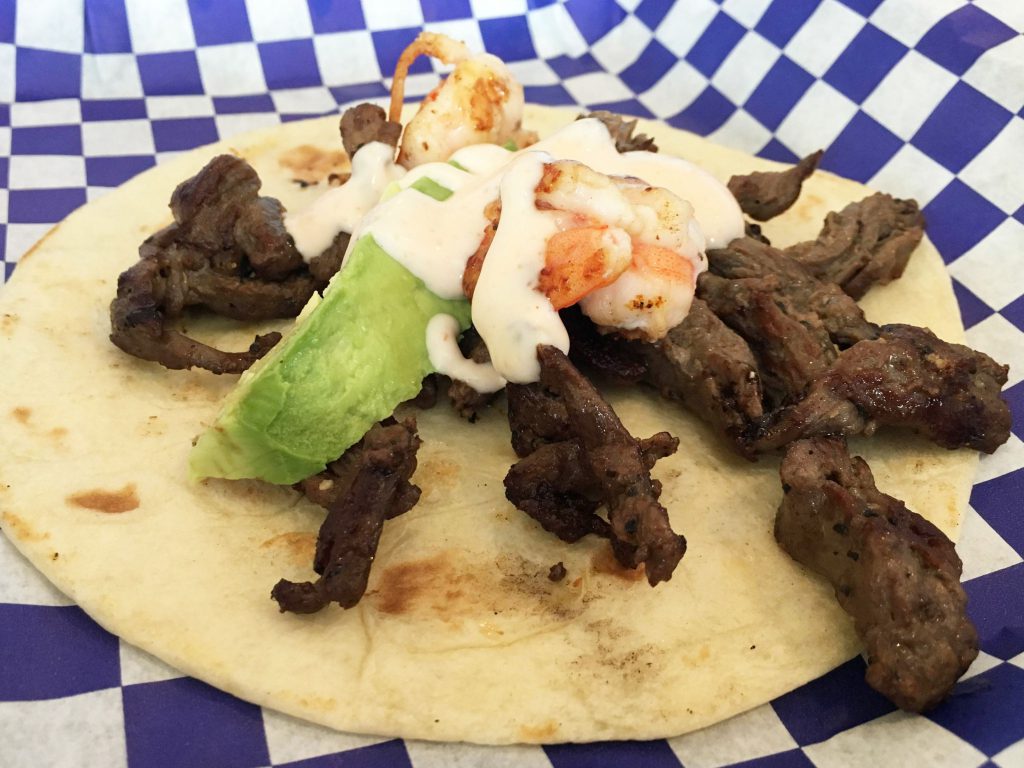 For my entree, I ordered the Pork Carnitas Torta ($9.99).  I chose carnitas, but you can order the tortas with your choice of several different meats, including chorizo, steak, or chicken.  Boy was I glad I went with the carnitas.  That meat was incredible.  And there was lots of it.  My torta was piled high with meat, lettuce, juicy tomatoes, and a thick slab of lightly grilled queso fresco.  A smear of mayo on the top piece of bread and refried beans on the bottom added creaminess and extra layers of flavor.  The bread itself was warm, soft, and toasty.  But that meat, though – that was really what won me over.  I’m still dreaming about that meat.  It was flavorful and juicy, but without being greasy.  The meat fell apart and literally melted in my mouth.  The sandwich was massive – a great deal for the price.  Even after I declared that I was officially stuffed, I kept eating because I just had to finish every last morsel of that delicious carnitas.  And they offer the carnitas in a few different menu items (huaraches, tacos, dinner plates, etc) so I am already counting down the minutes until I can go back and have it again. 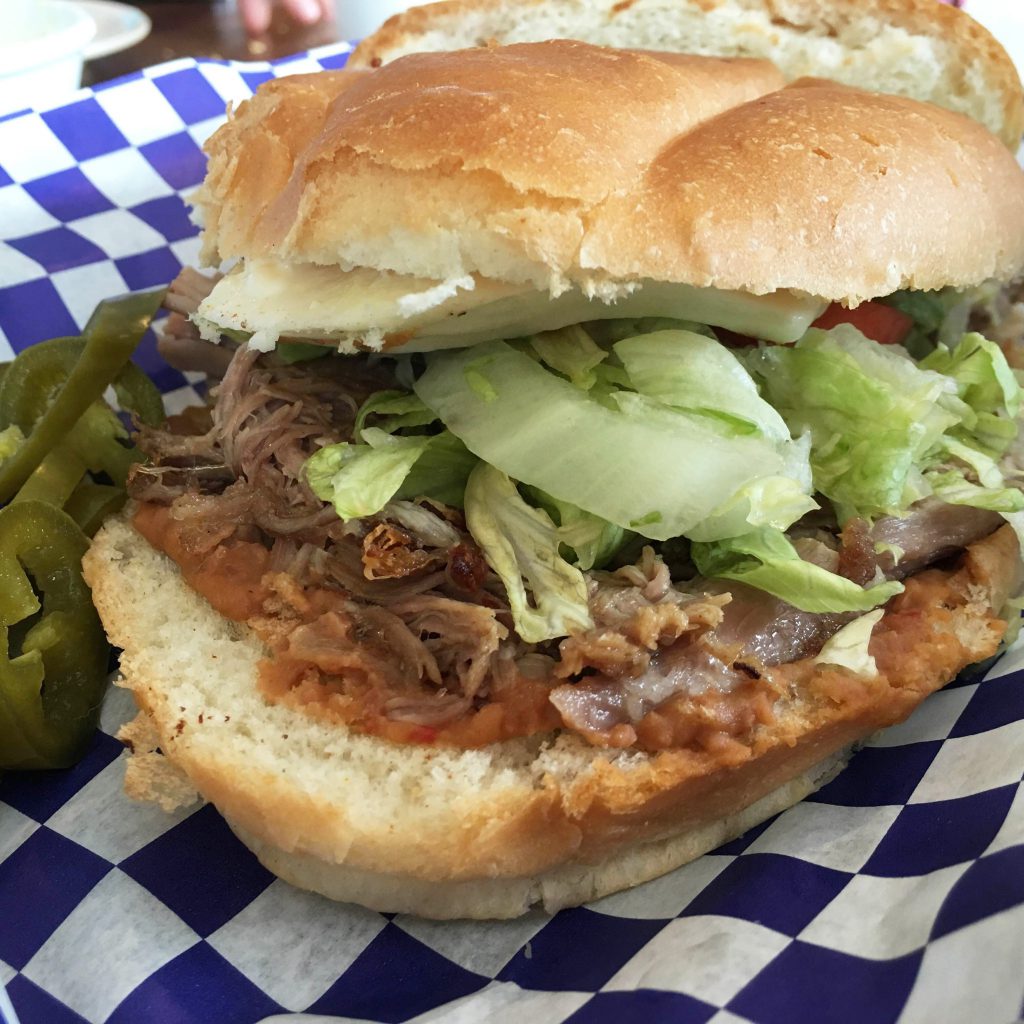 After this dinner, one one thing is clear – Taco Libre is NOT your typical Mexican restaurant.  It offers the same casual setting and low-price options as other Mexican eateries, but with food that is decidedly more polished and delicious.  They offer a lot of fun and unique menu items that I can’t wait to try next time around – the West Coast Burrito, the Sriracha Shrimp Taco, and the Chori Chicken Dinner Plate, for example.  Taco Libre is a step up when it comes to your average Mexican fare and it is worth the trip outside of your go-to regimen to give it a try.  And don’t be surprised if it becomes your new go-to. 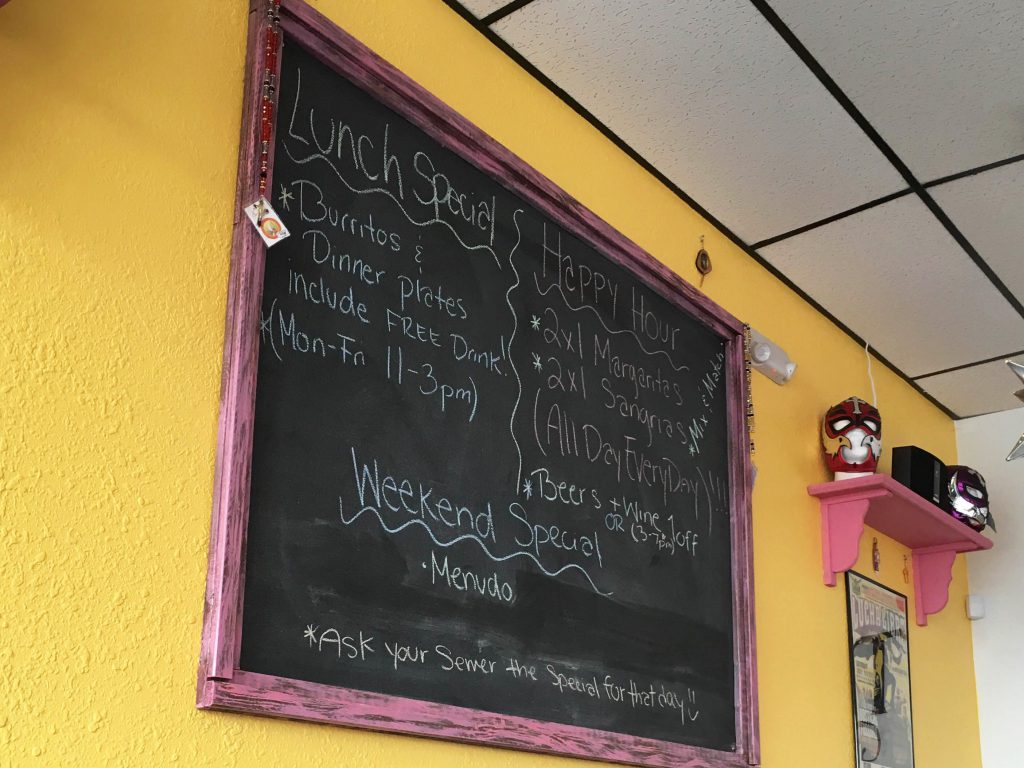 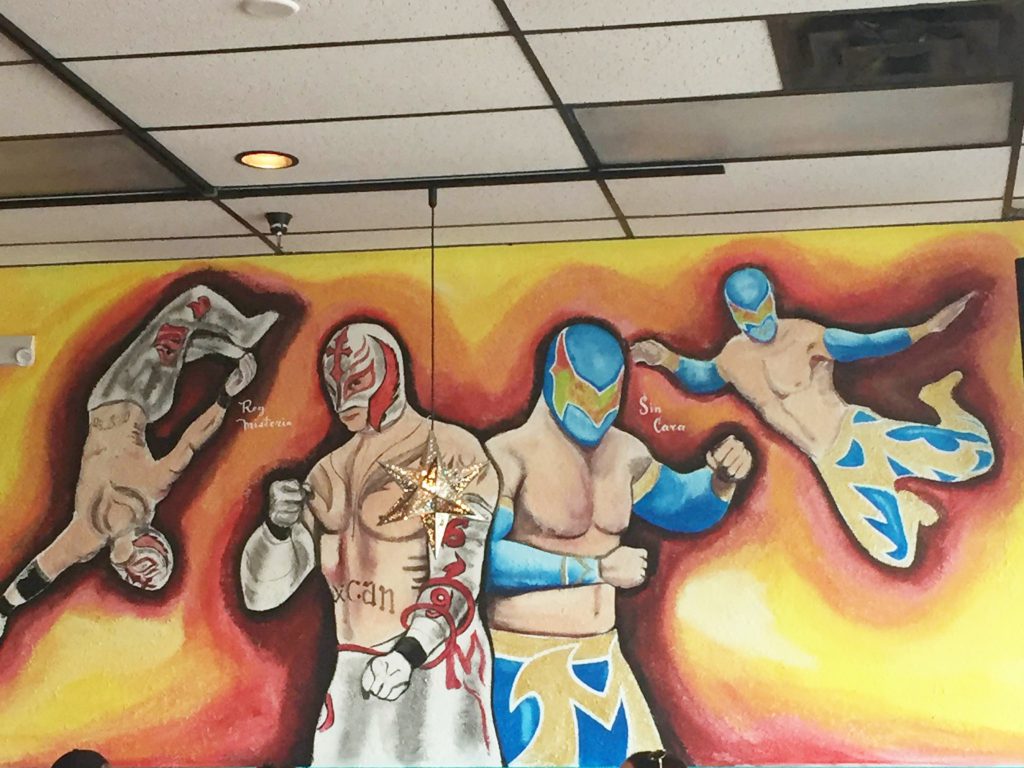