A lot of my favorite childhood memories center around the food I’ve shared with those I love. One of those memories is the arepas at Joe Robbie Stadium, also known as Pro Player Park, Pro Player Stadium, Dolphins Stadium, Land Shark Stadium, Dolphin Stadium, Sun Life Stadium, and now Hard Rock Stadium. Sweet yellow corn cakes filled with white, melted cheese that would stretch from piece to piece as you shared with family and friends. Watching a Miami Marlins game in my living room sparked this memory, a google search for “best arepas in Jacksonville”, and the discovery of so much more at Salento Colombian Steakhouse in Mandarin. 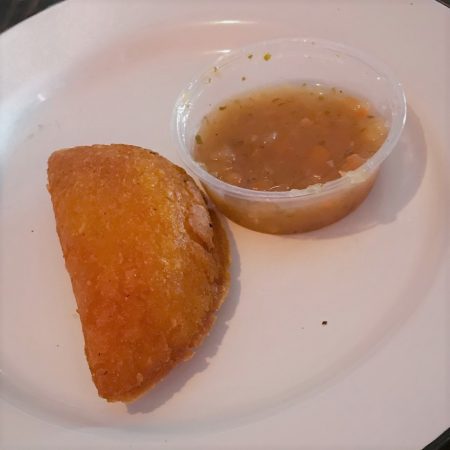 Salento Colombian Steakhouse has a few tables outside, but you need to sit inside for the true experience. When you walk through the door it’s like you’ve stepped in to South America. The walls are brightly colored, decorated with tropical artwork and plants. The smell of grilled meat and the sound of Spanish music fill the room. The restaurant is on the smaller side, so there may be a wait at times, but we were greeted and sat as soon as we walked in. Luckily, they are in the process of expanding the restaurant to allow more room to enjoy Colombian cuisine.

The menu is a magazine, filled with pictures of their food. I find this helpful for someone who isn’t familiar with Colombian flavors. WARNING- deciding what you want will be tough, so you should do what we did and visit with friends who like to share.

Our server greeted us immediately with mint infused water. Salento offers a variety of fresh fruit juices, almost like fruit smoothies, mixed with milk or water (milk creates a creamier texture). We ordered a pineapple juice mixed with water ($4). The pineapple tasted fresh and ripe, a refreshing blend of sweet and tart.

Our server offered to explain anything on the menu and a detailed explanation of the weekend special almost made me change my order. We started with a yellow corn and cheese arepa ($3.75), a mixed grill arepa ($9), and chicken empanadas (4 in an order, $4.50). The yellow corn and cheese arepa was the perfect combination of sweet corn and salty cheese. The mixed grill arepa was made with white corn, which is not as sweet, and holds up well to the simply seasoned chicken and steak. It is easily a meal by itself with the avocado on top. The empanada filling was very flavorful and the outside had a hush puppy-like crust. 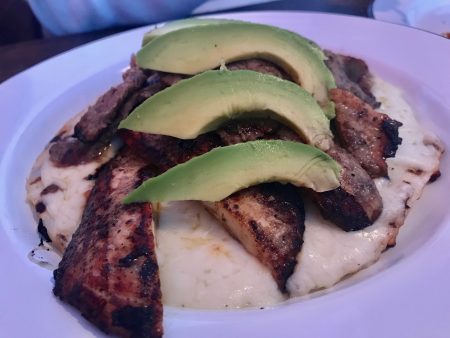 Rather than having to choose one meat from the grilled entrées (ranging from $9 to $19 each), we brought enough people to enjoy them all and decided to share the Salento House. Listed on the menu as a platter to feed 3-4, it included steak, chicken, pork rind, pork ribs, blood sausage, chorizo, pineapple slices and three sides (we chose rice, beans, and sweet plantains) for $58. We added a side of fried yuca ($3.50) because why not. A “small” cast iron grill piled with protein arrived. Our server described each meat, brought homemade chimichurri and habanero hot sauce, and left us to feast. Chicken and steak were the most familiar meats. Very similar to what was on the mixed grill arepa, the strips were well seasoned with a light char flavor from the grill. The pork rind (chicharron) tasted like extra crispy thick cut bacon. Chorizo and blood sausage had a crunchy crust, giving them a good snap with each bite. The chorizo was peppery without being too spicy. I typically describe blood sausage as earthy and didn’t like it until I tried it here. It was extremely mild and reminded me of boudin. Of all the meat, the ribs were my least favorite. They weren’t quite as flavorful as the rest and a bit more difficult to eat. 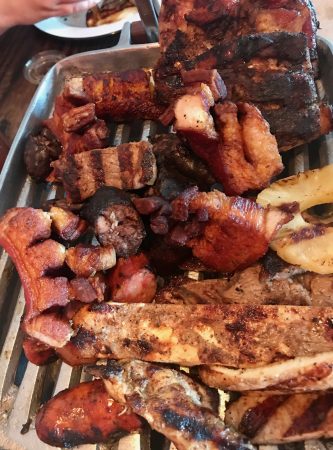 All the sides had great Latin flavor as well. The beans almost tasted like chili, and the rice was cooked perfectly. The plantain was sweet, fried whole and chopped into large chunks after cooking. Yuca was crunchy and light, served with a creamy paprika sauce.

Our party of five walked out with meat left to spare, discussing our next visit. I think the best way to describe the experience at Salento Colombian Steakhouse is authentic- the food, atmosphere and hospitality.

Bonus- Salento is worth the drive if you don’t live in Mandarin, which makes it a great way to get your husband to go to some of the stores in Mandarin- I’ve used it more than once.