Restaurants serve a purpose beyond filling our bellies; they are a meeting place, a common ground, and often they offer convenience. In our sprawling city sometimes you go to a restaurant because it’s the best fit for your group in a given area. That was how I found myself at Palms Fish Camp for lunch on a recent Sunday. I had family in town and they were leaving to go home on Sunday. They took the kiddos to the zoo to tire them out in the morning before the long car ride. We met up for lunch on their way out of town. Tasked with picking something around the zoo or further north, but not wanting to go all the way to the airport, I found Palms Fish Camp online. It was just down Heckscher a few miles from 295, and it had mixed reviews. But it was a relaxed place on the water, which is always a bonus when dining with youngsters.

Palms Fish Camp is relatively new, opened in 2017. It sits on Clapboard Creek along the Timucuan Ecological Preserve and shares an ample parking lot with public boat access. We sat on the expansive, partially covered deck as it was a perfect day, save for the gnats that joined us for the duration. They were super annoying.

We had 7 adults and 3 kids in our party. We were welcomed and seated pretty quickly, but after that there was some confusion with our service. We asked for kids menus and were told it would take a few minutes as they had to be printed off. I’m sorry, what? Kids are the least patient diners. Most parents spend a considerable amount of effort keeping them amused and satisfied when dining out, so when a restaurant is completely oblivious and unprepared from the word go it’s understandably frustrating. We ordered our drinks- nothing fancy, just waters, teas, and sodas- and waited than 10 minutes to get them. Two of us ordered mimosas since it was brunch and those came out before any other beverages. At that point we were worried about how the rest of the meal was going to go. 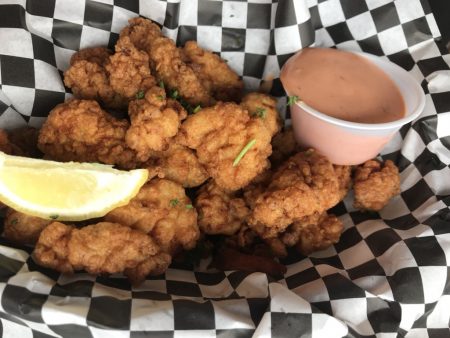 For appetizers we shared fried gator tail and corn nuggets. The corn nuggets were yummy little fried nugs as expected. The gator tail was crazy good! It was super fresh, not chewy, not overcooked, just perfect little meaty bites with a nice crisp breading. Honestly it was the best gator tail I’ve had in Jax and it’s not even close. We were all shocked and later even ordered some to go for the kids because they liked it so much.

For our meals we had a specialty omelet stuffed with veggies and shrimp, grilled Mayport shrimp platter, pan seared scallops, and a burger. The omelet was a brunch special and while it wasn’t super pretty, it was pretty tasty. It came with roasted potatoes that were fairly average and a biscuit that tasted like it was a day old. Since it was a Sunday it’s a fair assumption that it was a day old biscuit, leftover from Saturday brunch. The Mayport shrimp platter can be fried, grilled or blackened. We had them grilled. The shrimp platter was just okay. It didn’t match up to other local seafood restaurants somehow, but I couldn’t put my finger on why. Maybe it just wasn’t super fresh. It wasn’t bad, but none of us thought it was up to par for Mayport shrimp. However, the scallops were fantastic. They were seasoned and cooked to a perfect golden sear. The side of grits blew us away. These were not diner grits. The grains were hearty, not fine, and the grits were creamy and cheesy with just the right amount of saltiness. The burger was awesome. It was big and flavorful, and cooked exactly to a medium. We got the burger to cut up and split for the kids, but the adults were more interested in it. We kept taking bites! 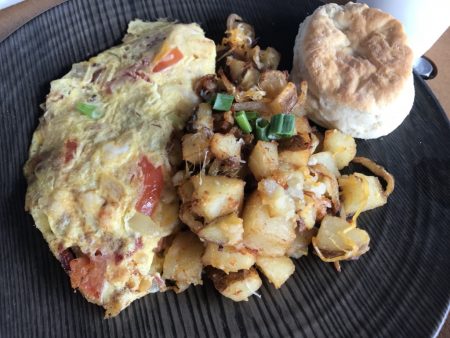 As we were enjoying our meal, the gnats really started getting to us. This is a known problem at Palms Fish Camp as we were offered bug spray for ourselves and lids for our drinks so the gnats wouldn’t get in them. Those of us that used the bug spray noticed a huge difference. I’m not sure what the solution is, as I assume part of the issue being that Palms Fish Camp is a newer construction and has invaded the habitat of creatures big and small. Plus now there is fine American blood for insects to feast on. I would assume they could spray the surrounding grasses, reeds, and sedges for insects, but that creates the issue of pollutants and poisons for the river and bees, fish, turtles, etc. that live within the flora.

After a rough start with the kids menus and the drinks, we weren’t super hopeful the rest of the meal would go well. But it actually did. Our food didn’t take any longer than expected, considering we were a rather large party, we had plenty of drink refills, and our server checked on us a number of times. I still contend children’s menus should be printed in bulk and kept at the ready, not printed to order. 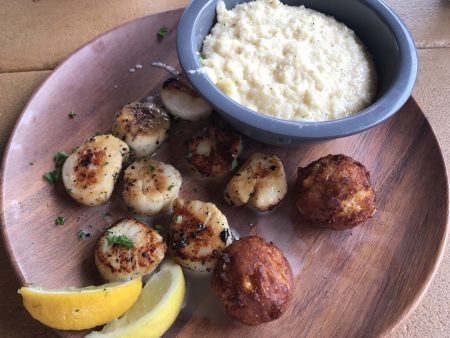 Overall we enjoyed the beautiful scenery and a better than expected meal at Palms Fish Camp. It’s a good, relaxed place to take out of town guests to enjoy the paradise we live and work in everyday. You can eat real food there, it’s not a fryer kitchen. Don’t miss the gator tail and the grits, plus enjoy a mimosa with brunch. 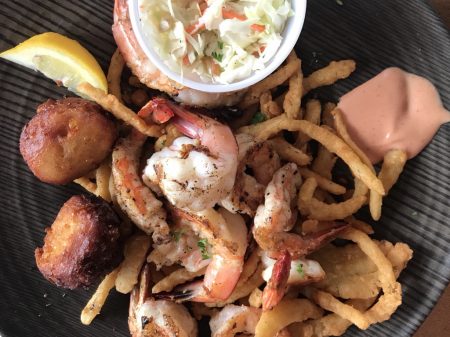 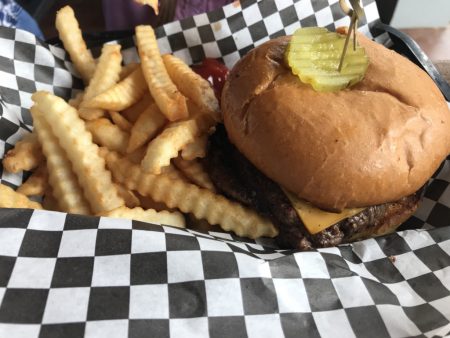 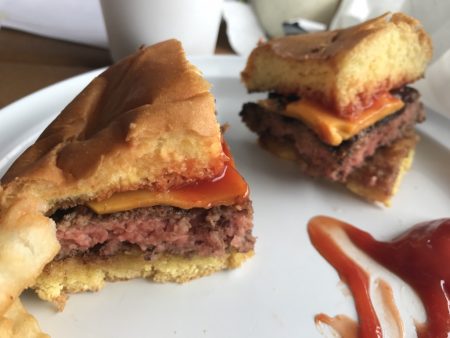 Palms Fish Camp- Burger cut up for the kiddos