One of my favorite places I suggest to visitors new to Jacksonville, or locals looking for something different is a trip to the Cummer Museum of Art and Gardens. It not only boasts an impressive collection of artwork and is nestled along the stunning St. Johns River, but is a surprisingly delightful place to grab lunch or brunch. The indoor seating is fairly basic with white tables, simple chairs, silverware and no adornments. I opted to sit outside in the shade of large red umbrellas on their wooden porch area. It was a perfect Florida afternoon and luckily the food only made the day better.

The menu is your typical Southern brunch selections, including Eggs Benedict, Crab Cakes, a mix of Fresh Salads, and Quiche. My sister and I were greeted by a bustling server who ushered us to our outdoor table quickly, mentioning they were down an employee and just got busy. Sure enough almost every table was occupied. She dropped menus and took our drink order. A few minutes later our waters were delivered by the only other server there and asked if were ready to order. My sister asked her opinion on either the Shrimp and Grits or the Eggs Benedict. She confessed this was her first brunch shift and was hesitant on a decision but ensured my sister she couldn’t go wrong either way. We decided to start with the Cheese Plate and new Schiebler Caprese Salad, (clearly we have an obsession with cheese) then for entrees she decided on the Shrimp and Grits with a side of fruit and I chose the Breakfast Croissant with a substitution of a Baby Blue Salad as my side. I’ll get to dessert later. 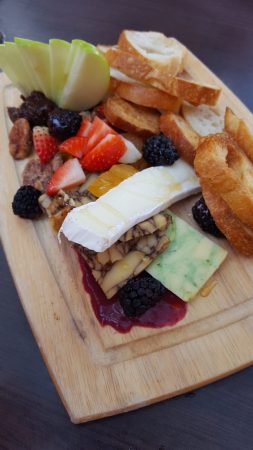 As we waited I noticed the two waitresses moved seamlessly through the tight fitted tables refilling drinks, clearing dishes and dropping food off at each other’s tables. The other guests seemed unfazed and content, never realizing the Café was understaffed. Meals came out promptly, drinks were refilled steadily, and the overall atmosphere was casual just like a Sunday should be. Our Cheese Plate and Caprese Salad were swiftly placed on our tables with no description of the dishes, only after I asked did she inform us. The Cheese Plate was the most impressive and biggest bang for your buck. At $12 the plate was covered in an assortment of fresh strawberries, blackberries, apple slices, apricots, fig compote, cinnamon pecans, crostini, and a hearty portion of a Porter Cheddar, Derby Sage, and Brie. I was in heaven and could have been content with just the Cheese Platter, rivaling any fine dining restaurant’s cheese board. The Caprese Salad ($9) was just as impressive. The creamy burrata lay on a bed of mix greens and basil surrounded by pesto tomatoes, sharp red onions and finished with Balsamic reduction. It was the perfect balance of acid from the tomatoes, cream from the burrata, bite from the onions, and sweetness from the balsamic drizzle. It left me wanting to lick the plate and wonder how I’ll have room to polish off my entrée. 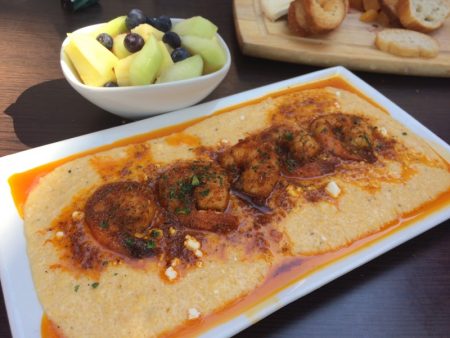 The Cummer Cafe- Shrimp and Grits

Lucky for me I have a bottomless pit as a stomach. As our entrees hit the table, my sister and I were excited to see what was next. Her Shrimp and Grits ($12) were expertly laid out on a rectangular dish. Velvety yellow grits almost overflowed off the edges and five large shrimp were placed along the center. She feared the dish would be too spicy, as the gorgeous but spice infused shrimp were covered in an orange, oily rub, which crowded the grits as well. To both of our surprise the dish had just the right amount of kick, not too overpowering. The goat cheese grits complimented the perfectly cooked shrimp and cut the bit of spice found in the dish. The only complaint we could find was that the tails were left on the shrimp and not exactly finger friendly to remove. Her fruit surprisingly did not mimic the fresh fruit found on our Cheese Plate, but included blueberries, pineapples and melons. My Breakfast Croissant ($10) was exactly what I hoped for. The flaky bread was covered in warm melted cheddar jack cheese, crispy salty bacon, and finished with a flawless over easy egg. Half way through my sandwich I bit into the liquid gold yolk that oozed over my fingers and buttery bread. If you’re not one for soft yolks, I would recommend asking for a fried or well done egg. The $1 upcharge for the Baby Blue Salad was well worth it. Boasting with oranges, strawberries, gorgonzola, cinnamon pecans and a rich Balsamic dressing, my only wish was to have more funky cheese! I devoured my plate and was looking forward to the highly recommend rosemary lemon squares by our server. To our disappointment they were out of the squares so we ordered the Molten Chocolate ($5) instead. The cake was considerably large and at first glance dense and rich. I told myself I was only going to have one bite but found myself going back for more. To our delight the cake was fluffy, light, spongy, warm and the perfect ending to our perfect Sunday. 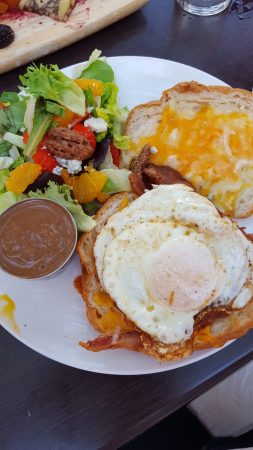 The Cummer Café is a well-hidden gem among breathtaking pieces of art. It is the compliment to a Saturday lunch after the Riverside Arts Market, a get away from the bustle of the humdrum work day or escape to a new part of our beloved city. 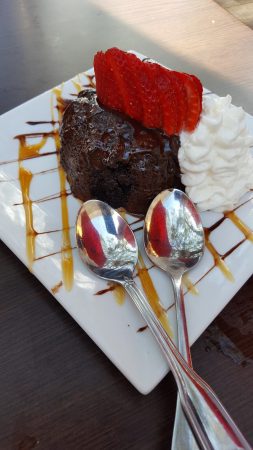