One of the great appeals of going to the movies is the experience of the outing.  Huge screens, surround sound, the magic of the movie, and of course the food.  Gourmet movie theatre food options are beginning to pop up throughout the area, but Sun-Ray Cinema has been offering up the tastiest theatre food in Jacksonville for quite some time.  The charismatic and passionate owners, Tim and Shana, have created the perfect movie going experience.  Simply order at the counter, sit down and relax in your movie, and your food will arrive in front of you within just a few minutes.  Everything is made fresh to order and with a variety of menu items to accommodate every dietary need, there is something for everyone.  Not only is Sun-Ray a unique destination for cinema enthusiasts, it’s also a fantastic foodie destination at the same time.

Shana and Tim met while working at the San Marco Theatre and they developed a ten year plan to open their own theatre.  They did it in only eight. Sun-Ray Cinema as we know it opened in 2011, but the building itself has been operating as a movie theatre on and off since 1927.  In between, the space also served as a live theatre space, a nightclub, and a special event space before Shana and Tim developed it into Sun-Ray.  It opened as a single screen and they did a tremendous amount of work to bring it up to being a 21st century theatre.  Shana smiled and said, “Sometimes it still feels like it’s 1976.  We did a lot to make it our own.  We did a lot to make it Jacksonville’s.  We did a lot to make it a place where people would want to go.  We built out our first auditorium and then two years later a retail space opened next to us so we built out our second auditorium and we connected it to the hallway.  Some weeks we play 6 movies, sometimes 2.”  Tim continued, “Keeping a single screen open today is nearly impossible.  Studios apply the same rules to a single screen theatre as a 24 screen theatre.  If you sign up for a new release movie you’re committed to a three week minimum just like the larger theatres.  The second screen, even though it’s only a 40 seat room, has been a lifesaver and allowed us to flourish.” 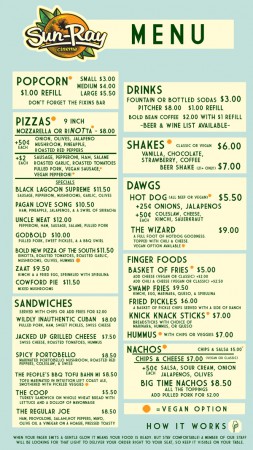 As far as establishing their reputation in the niche market they’re in, Shana said their goal is simply to try to be the best at everything.  So far, that’s working quite well for them.  “We try to play the movies people are going to come to first and we try to play movies that are a good fit for what we’re really good at playing.”  Shana explained, “The titles that are specialty products, like the new Wes Anderson movie will do great.  And especially anything perceived as not playing elsewhere.  We have signature series of “talkies” with live commentary throughout the film by people who were associated with the film.  We are also doing a series with 101 years of Orson Wells.  We have an annual screening of White Christmas every Christmas.  We try to play enough movies that everyone can find something they want to see.”

Shana and Tim apply the same rule to Sun-Ray’s food offerings.  Tim said, “We opened the kitchen space about four months after we opened.  It took us awhile to get that up and running.  We had to find a stone hearth that was electric, and we finally found a used one from Sweden.  It’s a really nice machine and allows us to make great pizzas.  We do an event every year where we have a Teenage Mutant Ninja Turtle Pizza Cook-off.  We screen the movie and go slice to slice against a local pizzeria.  All the money goes to the winner’s charity of choice.  We won both years!  I don’t know if it’s because we had house advantage, but even the owner of Moon River admitted,“yup you beat us!” and that’s our personal favorite pizza in town!” 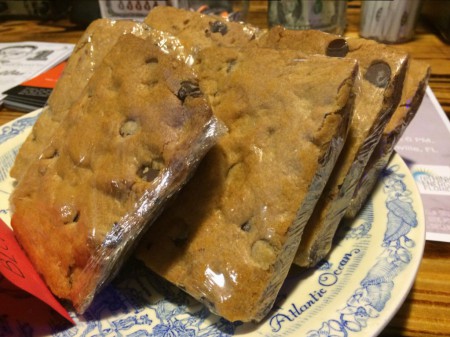 The motivation behind providing such creative entrees and snacks at Sun-Ray is because Shana and Tim believe that it completes the movie going experience.  Shana explained, “Eating in a movie theatre is really liberating.  That’s why everyone tries to sneak stuff in right?  But you can’t sneak in a whole pizza.  And you can’t sneak in a sandwich that’s pressed and expected to still be hot.  You can’t necessarily get a glass of wine and relax in every movie theatre.  We get to make the calls since it’s just the two of us.  There’s no corporate structure at the top that dictates what we’re going to do.  So, we decided that people can get a good quality pizza at a good price delivered to their seat.  The only barrier we had to deal was, ‘How do we make that happen?’”  The process that Shana and Tim implemented is very easy.  Movie-goers order at the counter then go get comfortable in the theatre.  The employees at Sun-Ray will deliver it to the seat via a table locator.  They emit a light glow when the food is on it’s way, but soon Sun-Ray will be upgrading to GPS locators so it will eliminate the minimal light in the theatre from the pagers.  As far as the menu, Sun-Ray has something to please absolutely everyone, and Shana’s rule is to take a chance, try something new, and if you don’t like it they will get you something else.  She laughed and told us that no one takes her up on that offer, so she feels like they’re doing something right.  She said, “We try to accommodate everyone because people go through different dietary needs at different times in their lives.  Some people can’t have gluten, some are avoiding animal products, some want a sandwich without bread.  But, we also have to think about when we make the menu that you’re going to have to eat this in the dark.  We want it to be a comfortable, pleasant experience.” 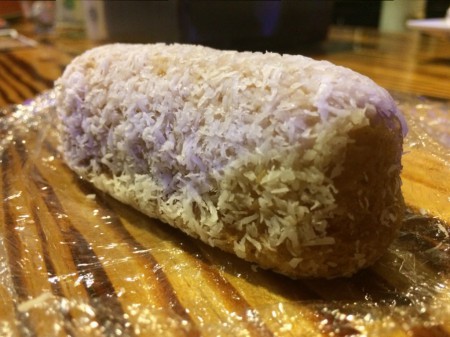 Drop all your preconceived notions of movie theatre food and get ready to be wowed by the offerings at Sun-Ray.  For readers without dietary restrictions, enjoy feasting on high quality meats and cheeses on Sun-Ray’s pizzas, nachos, sandwiches, and hot dogs.  For our gluten free readers, the hummus is fantastic and can be eaten with chips or veggies.  The hummus is made by local favorite Casbah.  The nachos are a second excellent choice for gluten free needs.  There is no gluten in the regular housemade cheese sauce, but the vegan cheese option does have a small amount of gluten as a binder.  For vegan and vegetarian options, there are a plethora of choices. Sun-Ray uses Fieldroast for veggie dogs, there is also a housemade vegan topping for their pizzas called “rinotta” since it’s “not ricotta”.  They have a vegan queso that is designed for nachos but it’s great with their breadsticks as well.  The menu is designed to be comprehensive, but at the same time they made sure to feature ingredients in several entrees to ensure simplicity for delivery.  Shana said, “When 150 people sit down at once it’s very chaotic.  It’s not like a normal restaurant where people order at 6:15, 6:25, 6:35.  Here, everyone comes in at the same time to see the same movie and they want their food in the first 20 minutes.  Plus we have to deliver all the food in the dark and there isn’t as much interaction between the customer and the server.  We thought about the pros and cons of having a wait staff.  It’s not ideal to have to sit and wait for someone to come over to you.  Or if you have to flag down a waiter if you have to leave early because the babysitter called, that’s also not ideal.”  As far as sweet treats, Sun-Ray used to carry Sweet Pete’s Candy but when Sweet Pete’s moved they changed their distribution methods to local businesses and it just wasn’t lining up.  So that motivated Tim and Shana to expand the dessert offerings because they found that when people come to movies they really want sweets, even if they aren’t eating dinner they do want something sweet to snack on.  All the in house dessert items are naturally made as vegan, and we would wager that no one can tell the difference.  The most popular option are the “Twankies”, which are just like twinkies except made with nothing artificial.  They also have housemade blondies.  For traditionalists, expect to see the normal range of candies that are movie theatre favorites. 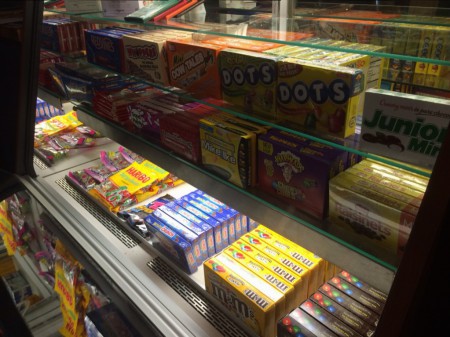 The motivation behind the diverse menu to serve dietary needs comes from Tim and Shana’s experience with their plant based lifestyle.  While not vegan, Tim and Shana do try to eat a 90% plant based diet and they’ve found through dining out that it was difficult to get flavorful options for vegetarian, vegan, and gluten free needs.  Shana told us that when they were designing their menu, they wanted people like them that aren’t necessarily making a 100% animal free commitment to still have the chance to make great food choices while they’re dining out.  For people who are 100% committed to being animal product free, Shana and Tim want them to feel safe and not have to worry about cross contamination with animal products.  They do keep the labelling of vegan and gluten free items to a minimum though because they feel as if it would scare people who aren’t vegan and gluten free into not ordering those items, even though you truly can’t tell the difference in them most of the time.  In fact, PETA gave Sun-Ray an award for being the #1 vegan movie theatre in the country.  Shana told us, “We just don’t want to turn people off.  We have really high quality meats and cheeses too in addition to our high quality vegan options.  We want to give customers whatever they want.  We just want to be there for the growing contingent of people making the choice to eat healthier too.  There are great restaurants in this city that have a vegan menu but you have to ask for it.  That frustrates me.  It’s challenging for me to ask for it and I’m not a shy person.  Saying, ‘Plant Based’ lessens the scary factor for most people.  Our culture is changing and we are changing with it.  There are so many people that don’t want to define as just one thing.  I only want to eat a diverse diet.” 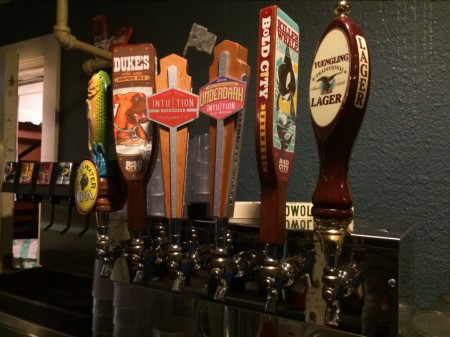 In addition to the incredible food offerings, Sun-Ray cinema also offers local beers from Intuition, Bold City, PingleHead, Green Room, and Aardwolf to enjoy during your movie.  If you’re ready to head over to Sun-Ray, you can check out their movie times on their website, the Florida Times Union, and their Facebook.  Sun-Ray Cinema is one of the beautiful businesses that makes Jacksonville into the unique and diverse city that we are.  For our dedicated foodie readers we know that all the food choices will delight you.  Shana said it best as we chatted with her, “It’s magical.  It’s a cheesy word, but it’s a magical feeling to get a hot pepperoni pizza delivered to you.  And it’s comfort.  You can relax and focus on the movie because you don’t have to think about where you’re going after.  You don’t have to eat here, but it certainly makes it easier.”  And why wouldn’t you eat there?  With the extensive and gourmet menu that Sun-Ray Cinema is offering, it’ll quickly become a dining destination that truly is magical.