I’ve recently moved to Jacksonville from Auburn, Alabama and one thing I love about living in Jacksonville is the abundance of authentic ethnic restaurants.  Living in Auburn, my only access to “Cuban” sandwiches were the ones made at Panera Bread, which are fine, but honestly, are about as authentic a Cuban sandwich as a Nacho Cheese Dorito Loco Taco is an authentic Mexican taco.  So I was thrilled when I Googled “Cuban Restaurants in Jacksonville” and there were plenty of options to satiate my Cuban sandwich hankering.  After perusing through the options, I decided to try Mambos Cuban Café and Pizzeria on Beach Boulevard. 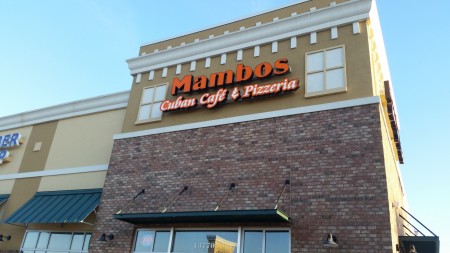 Upon entering Mambos, I was impressed with the décor and the atmosphere.  On the left there’s a beautiful mural depicting Cuban landscapes and people.  The dining room colors were bright and inviting and the sounds of Cuban music filled the restaurant.  They did a wonderful job making you feel like you disembarked a plane that landed in Havana.  I half expected a trade-embargoed cigar to fall out of the silverware roll.

However, I wished that Cuban experience carried over to the service.  Everyone was friendly, but it was remarkably slow.  We visited Mambos on a Sunday evening around 6pm-ish or so and there were only about three other tables occupied, so I’m not for sure why things were so slow.  We were seated as soon as we walked in, but it was about 10 minutes before a server came to ask how we were and take drink orders.  I judge the level of service by how quickly/often they can keep my drink refilled.  I’ve been to restaurants where my drink was refilled so fast, I never seen the bottom of my glass.  That was not the case here.  My drink was so empty, I was sucking on ice chips to try and get any kind of liquid refreshment.  But all service shortcomings can be forgiven if the food is outstanding. 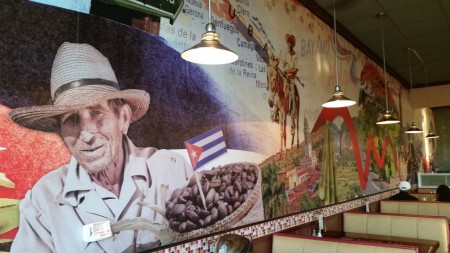 The menu is large and varied.  It has your Cuban staples, such as Empanadas and Paellas.  They also offer a full pizza menu, but with a Cuban twist, like the Cubanita Pizza topped with sweet plantains.

For an appetizer, we couldn’t decide on any one thing, so we decided to go with the Mambos Sampler ($13.99).  It’s a huge appetizer consisting of four Tostones (green plantains, flattened and fried), four sweet plantains, four fried yuccas (potato’s cousin), four pieces of Chicharron de pollo (fried chicken pieces), and Masitas de Puerco fritas (fried pork chunks topped with onions in a house made mojito sauce).  The sampler came with house made Mambo sauce and cilantro cream sauce.  My favorites of the bunch were the sweet plantains and the Chicharron de pollo.  The plantains were perfectly caramelized all around, crispy on the very edges, but soft and creamy on the inside.  Best sweet plantains I’ve ever had the pleasure of sticking a fork into.

When I read the menu and saw Chicharron de pollo, I thought we would get a few pieces of fried chicken skin.  And if it were just that, I would’ve been more than pleased.  When the plate arrived, I was surprised that it was actually pieces of fried chicken.  The chicken was fried crispy and was not greasy.  It had a great flavor, texture, and not a single piece of it was dry.  But eating it was awkward.  The pieces were broken parts of chicken.  It wasn’t a full chicken leg, it was half a leg, a quarter of a breast, a third of a thigh, etc.  Because the pieces were unrecognizable until you started eating it, it made it difficult to eat around the bones.  There were a couple of pieces where a bone just about impaled my tongue.  So be warned, it’s a delicious piece of chicken, but you might want to pick the chicken off the bone before eating it.  Otherwise, you may need to visit the urgent care next door for an unexpected puncture wound. 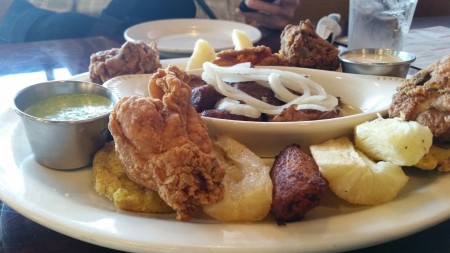 The rest of the appetizer sampler, the fried yucca, tostones, and Masitas de Puerco fritas, were so-so.  They seemed to be more of a vehicle for the sauces.  The mambo sauce was terrific.  It was kind of sweet, a little vinegary, and mayonnaise based.  The cilantro caper cream sauce was good, but cilantro is one of those herbs that people either really love or really hate.  If you happen to land in the former camp of cilantro lovers, you’ll really enjoy it.  Both sauces made the so-so parts of the appetizer sampler taste much better.  But really, those sauces would’ve made a flip-flop taste better.

Once we were through with the appetizer, I ordered what my stomach and taste buds were craving: an authentic Cuban sandwich.  Mambos has two types of Cubans – the regular Cuban on regular Cuban bread, and the Media Noche, a Cuban made on sweet bread.  On the recommendation of the server, I decided to go with the Media Noche.  A Cuban sandwich, on paper, seems simple.  It’s roasted pulled pork, ham, pickles, Swiss cheese and yellow mustard.  What separates an authentic Cuban from just a ham sandwich is the preparation of the pulled pork and the type of bread used. 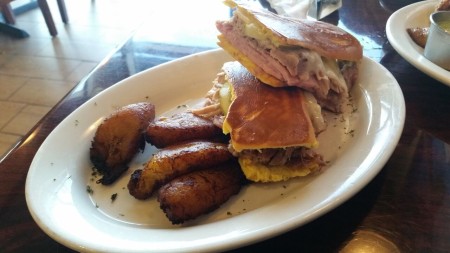 This Cuban was beautifully made.  The pork is braised in their house made mojito sauce.  It was tender, juicy, and melted right in your mouth.  The bread was perfectly pressed with a perfectly crispy outside, yet soft on the inside.  The ham provided a little saltiness, the yellow mustard gave a nice little vinegary kick, and the pickles added a cool, refreshing, briny bite.

So while the service was not great, the food, specifically the Media Noche Cuban sandwich, more than made up for it.  So until the tourist restrictions to Cuba are lifted, I’ll be more than happy to get my Cuban food fix at Mambos.  Based on atmosphere, food, and service, I’d give Mambos Cuban Café and Pizzeria three-and-a-half trade embargoed cigars out of five. 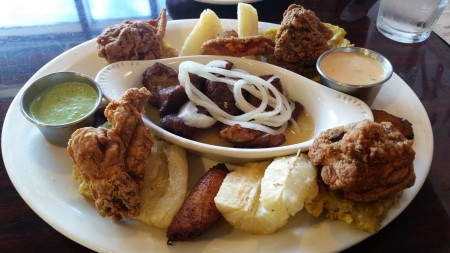