Cowford Chophouse opened to much fanfare back in October 2017 and since then has been the place for high end steaks in Jacksonville. Not one to be known for only great steak, Cowford Chophouse looks to promote dessert and invited us and a few other Jacksonville food writers to try out their new dessert menu launching (or launched, depending on when you’re reading this) on May 9th, 2018.

This was my first time to Cowford Chophouse and I was immediately impressed at the overall beauty of the restaurant. It’s a three level restaurant with the highlight being the rooftop bar area. It offers a wonderful view of the Main Street Bridge. On my visit, it was closed for a private event, so I wasn’t able to get pictures, but I was able to get a quick view from the door. I will definitely check it out on my next visit. 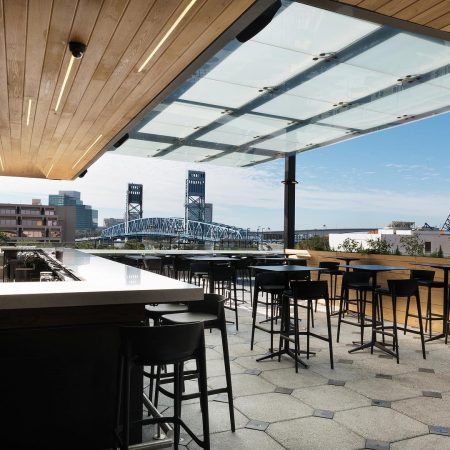 Chef Michael Bump is the award winning Executive Pastry chef for Cowford Chophouse and presented us with a 6 course dessert tasting menu of what’s to come this spring and summer.

The Blueberry Crisp was probably my favorite dessert of the bunch. Its vanilla shortbread, blueberry filling, and lemon buttermilk ice cream, all house made. It seems like a simple dessert, but the flavors were wonderfully complex. There was an overall pleasant tartness with the lemon buttermilk ice cream that played well with the sweetness of the blueberries. The vanilla shortbread was a wonderful crunchy texture, but also had a satisfying disintegrating mouth feel when eaten with a bit of blueberry and ice cream that made me keep digging in for another bite. It was presented first and I made a rookie foodie mistake and ate the whole thing knowing 5 more courses were still to come, but I couldn’t help it. It was delicious. Overall, this dessert felt like home; it fit well with the high end atmosphere of Cowford Chophouse, but could easily fit in being eaten from an old hand me down bowl sitting in a rocking chair on grandma’s front porch. 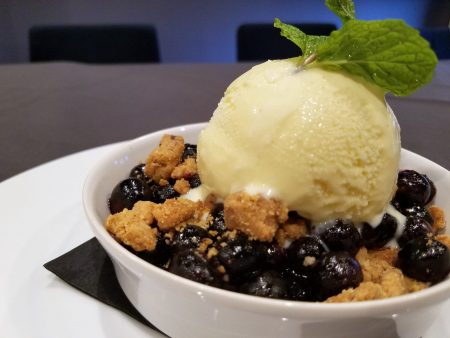 Chef Bump has been experimenting with incorporating cereal into his desserts and it shows up in the next couple of offerings. For the Red Velvet cake, he uses chocolate coated Cocoa Krispies type cereal to top his cream cheese butter cream layered cake as a crunchy element. It works well and tastes fantastic with the side of Valrhona Dulcey (a premium French chocolate) ice cream. The cake itself was delicious and had a nice sponge to it. 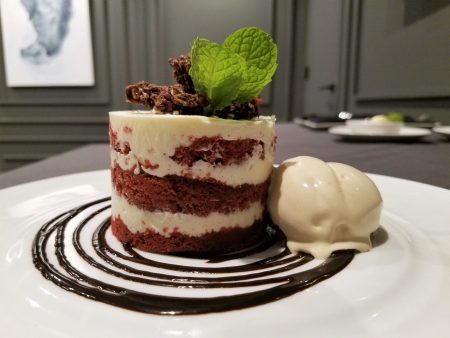 Another example of Chef Bump’s cereal experimentation is highlighted in the Strawberry Crunch Sundae. It’s a chocolate chip blondie topped with house made strawberry ice cream and chocolate sauce. On the side is a bruleed banana and topped with a “filthy” maraschino cherry. However, the real star of this dessert is the Cap’n Crunch whipped cream. Cap’n Crunch cereal is steeped in cream and vanilla, heated, chilled, and strained. The now Cap’n Crunch infused cream is put in an ISI charger (it’s those contraptions you see the chefs on “Chopped” try to use to sometimes great frustration) and voila, Cap’n Crunch whipped cream. It’s also topped with a Cap’n Crunch candy. The whole composed dish was excellent, but it was the Cap’n Crunch whipped cream that really blew my mind. As soon as I took a bite of it, I was immediately transported back to my 8-year-old self sitting in front of the TV watching Saturday morning cartoons with a bowl full of half crunchy, half soggy Cap’n Crunch cereal. It was amazing to witness the thought and ingenuity behind the creation of this dessert. 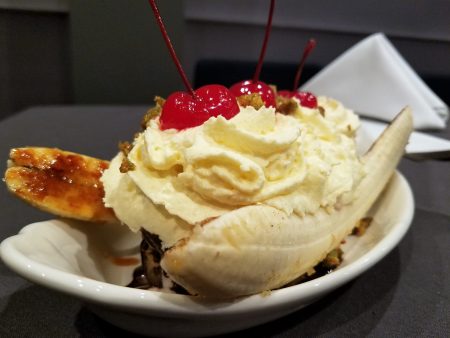 The playfulness continued with Chef Bump’s take on a Boston Cream pie. Chef Bump’s version is the Boston Cream doughnut ice cream sandwich. A house made glazed doughnut is sliced in half and filled with house made vanilla bean ice cream topped with whipped cream, dark chocolate sauce, and tart cherry compote. The doughnut was cakey, thick, and dense. The ice cream worked well with this and helped moisten the doughnut. The doughnut still had a nice structure to it without the melting ice cream turning everything to soup. The dripping dark chocolate sauce tasted delicious and when presented, made for a good Boomerang Instagram story. 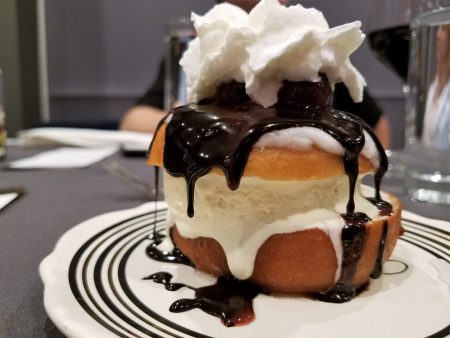 Being that Cowford Chophouse is a high end restaurant, it can’t all be fun and games with whimsical desserts filled with child-like wonderment. It’s time to get serious, the adults are eating. The Blackout Cake is exactly the type of dessert I’d expect to see at a high end establishment, both in presentation and ingredients used. The Blackout Cake is a black cocoa cake with dark chocolate ganache, dark chocolate custard, served with a side of house made raspberry sherbet. The plate was garnished with oreo cocoa nib rocher, whipped crème fraiche, chocolate caramel, and Chambord (raspberry liqueur) pearls. This cake was moist and richer than most of the patrons in the restaurant. The raspberry sherbet was a great choice to help pull me back from the Blackout Cake’s rich chocolate hold on me. The cake alone can overwhelm you, but take a bite of it and a bite of ice cream and it comes together beautifully. This was a favorite among the group of food writers and rightfully so. 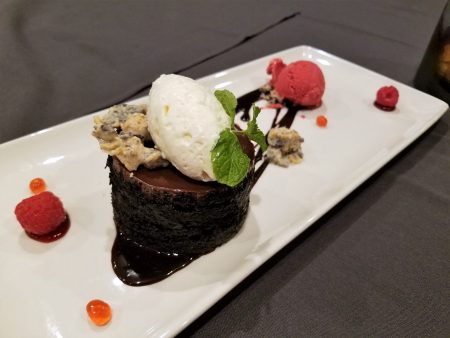 The last dessert to close out the night was a Cold Brew Coffee and Doughnut. The cold brew is made with Nicaraguan coffee beans roasted and cold brewed in house with a house made custard filled doughnut. The coffee had a little surprise; a vanilla cream ice cube that kept the coffee cold and added a bit of flavor without watering down the coffee. 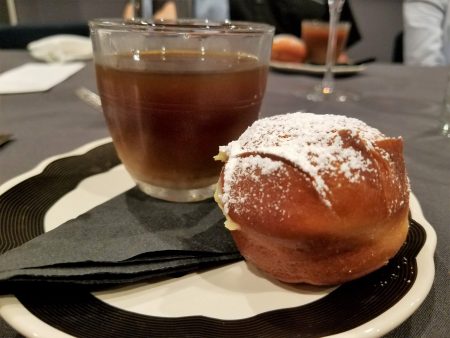 Chef Bump has created a dessert menu that embodies not only his unique style, but the restaurant and our city. It is filled with comfort, fun, whimsy, and elegance. Eat the meat, but save room for the sweets. 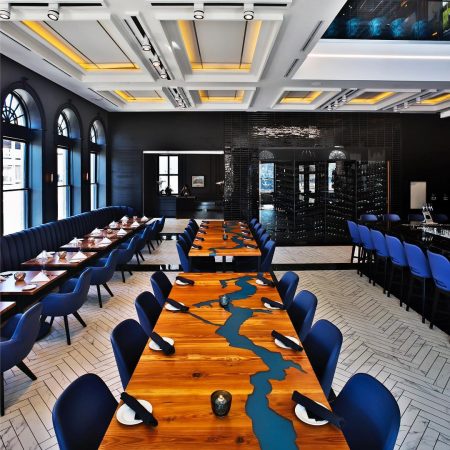