Growing up in Jacksonville there were a few restaurants everyone loved and everyone still remembers to this day. One of the wonderful Jacksonville institutions was The Homestead located on Beach Blvd in the historic haunted old building now occupied by Taco Lu. While the building is now home to this new Jacksonville institution the old Homestead restaurant moved on to the food heaven in the sky….until now! The Homestead has reopened in the space on Penman road previously utilized by Tomo Japanese Restaurant. We ventured in during The Homestead’s second week at 5:30pm on Friday night and the restaurant was already on a 20-30 minute wait. It’s clear that folks missed the good ole fried chicken and country cookin’ The Homestead was known for. The big question we had was, “Will the food stand up to the food of our memories?” Specifically will the fried chicken and biscuits live up to what we remember? 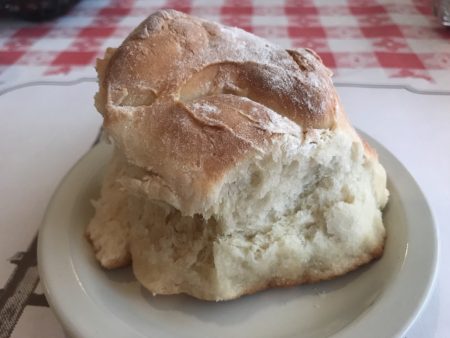 After we placed our order, biscuits quickly made their way over to our table. Maybe it’s my mind playing tricks on me but these biscuits really took me back to the original restaurant. The biscuits were flour-ey with a touch of sweet and more of a cross between a really good dinner roll and a biscuit. Like all great southern restaurants the biscuit was served with butter and honey which are both a must when you dive into these mounds of goodness.

Forty five minutes after the biscuits made it to our table our main courses were delivered. I realize it was the 2nd Friday night since the restaurant opened but 40 minutes is kind of ridiculous for ticket times. When a restaurant is still getting its feet under it, it really would make a ton of sense to seat less tables and do a great job with every table rather than seat every table and do a poor job serving each table. In addition, there were so many tables and chairs in the dining area that the servers and guests were struggling to squeeze around the furniture and seated guests. 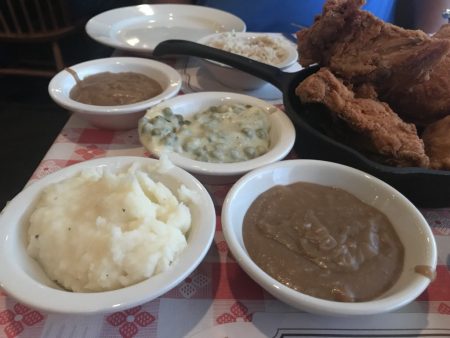 The Homestead, Chicken and Sides

The Homestead serves up their sides family style. You get a choice of two sides with each entree even entrees that traditionally don’t get a choice of side like shrimp and grits get choice of 2 sides. The sides on the menu are cream peas, mashed potatoes and gravy, and rice and gravy plus on vegetable of the day. On the day we visited the veggie was mac n cheese. But before we got our order they ran out of mac n cheese and changed it to Italian green beans. The mashed potatoes were mediocre, the cream peas were way too thick but had okay flavor. The gravy was soooooo thick it was basically pudding. The Italian green beans lacked flavor. Everything was basically slopped in bowls with some spilling or dripping over the sides. The sides definitely need work.

The other entree we indulged in was the shrimp and grits. The Homestead serves theirs with tomato gravy, cheese, and blackened shrimp. It was a solid dish. The grits were nice and thick and gritty. The tomato gravy was very flavorful with just a bit of a kick and the cheese was a nice addition. The only complaint we had was the blackening seasoning was very unevenly applied with it caked on some shrimp, barely on some, and just the right amount on others. 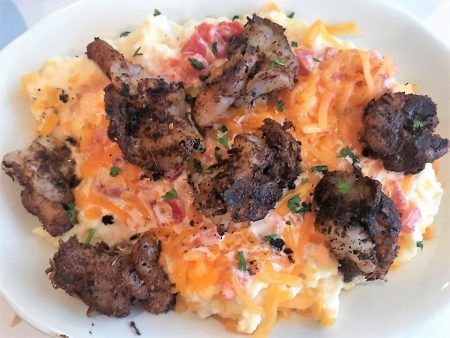 We must share the service was quite good. While our meals took an exorbitant amount of time to arrive, our server checked in regularly, refilled drinks, and brought extra biscuits. In time we hope to see the new version of The Homestead rival the old version. Hopefully they’ll work out the kinks and get that fried chicken up to par so it ranks among the best in Jax once again. 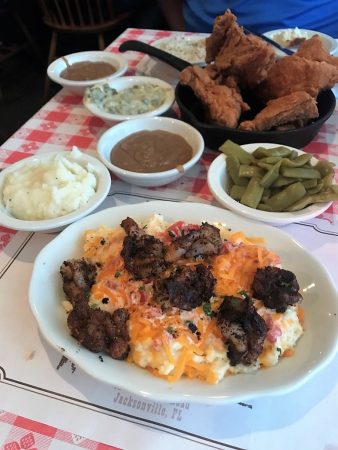 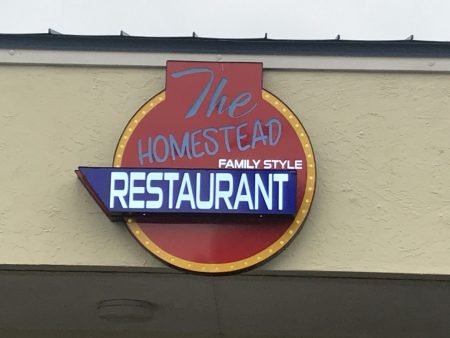