The pink cupcake is a locally owned cupcake shop located in the Jacksonville Landing. They’ve also very recently added a food truck to spread in order to allow the rest of Jax a chance to experience their sugary deliciousness. On this occasion we stopped in to try the cupcakes from their food truck. I can’t imagine the cupcakes in their physical location are any different than the ones they’re serving from the truck. Obviously they’re not baking them on location. On to the cupcakes! 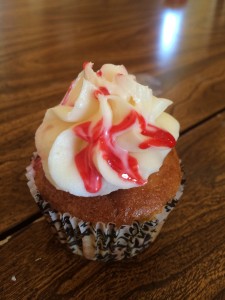 Food: Each cupcake served from the food truck runs $2. They’re medium sized cupcakes. This seems like a really fair price to us since a mini cupcake half this size runs you $2 at a few of the other cupcake shops in town. We started off with the Butterfinger cupcake. It was sooooooo rich! If you like butterfingers and you enjoy very rich sweets, there’s a good chance you’ll really like it. You can really taste the Butterfinger. The frosting was kind of overwhelming for me. Overall it was a pretty good cupcake. The next one we tried was the cinnamon apple. When we purchased this one they said they were trying out a new richer batter than usual. It almost tasted like an apple fritter in a cupcake. We preferred their typical batter to this one. It was interesting though. The last cupcake we tried was the white chocolate strawberry. This was our favorite. The flavors were really balanced.  It was a nice mild mix of strawberry and white chocolate. This one was less filling than your typical cupcake without sacrificing any of the flavor or sweetness. We also appreciated that real strawberries were used as opposed to just using strawberry flavoring. 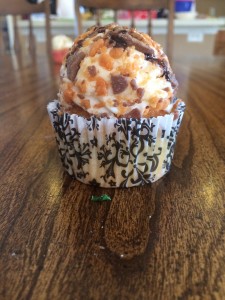 Overall we see The Pink Cupcake as a nice addition to the ever growing crowd of cupcake shops in the Jacksonville area. 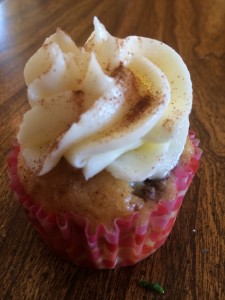 Positives:
The White chocolate Strawberry cupcake is a nice light treat.
Their food truck makes cupcakes accessible without having to head down to the landing.

Negatives:
We couldn’t come up with anything specific. 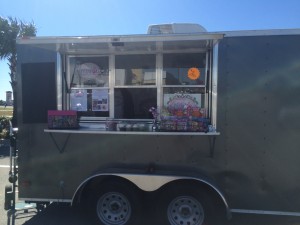