x
Tonight we visited Pisco’s, a Peruvian restaurant on Southside.  Maybe I’ve lead a sheltered life, but Peruvian is just not one of the cuisines that jumps to the front of my mind when I’m headed out.  Every time I do end up at a Peruvian restaurant I’m entertained by the menu as I try to figure out how some ingredients work together.  I’m sure if I ate it more often I’d be able to intelligently compare previous Peruvian restaurants.  As it stands, Peruvian food is always a novelty to me.  That being said, there are certain standards that restaurants need to attain regardless of cuisine.  To that end I’m pretty confident in the accuracy of the review given my shallow history with Peruvian cuisine. 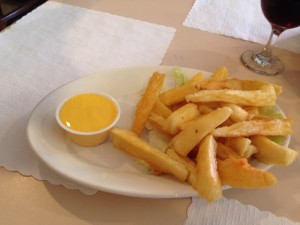 Food: When I eat at a restaurant that bills itself as being cuisine from a certain country, I expect the entire menu to represent that, especially drinks.  Pisco’s carries at least two Peruvian beers.  They also offer a pretty good Sangria.  Not sure if there is such a thing as authentic Peruvian Sangria, but it was tasty.
We started with Yuca Frita which is “fried Yucca” served with a creamy sauce ($4.25).  The yucca was prepared very nicely.  It kept it’s flavor and offered a texture not too different form french fries.  The sauce that came with it was pretty bland.  So much so that we commented we would have preferred the yuca with ketchup.
For dinner, we ordered Pollo Saltado ($11.95).  This is stir fried chicken with red onion, tomatoes, cilantro, soy sauce, and french fries with a side of rice.  One of the most recognized dishes from Peru is Lomo Saltado.  Lomo Saltado is made with Beef.  Sub out chicken for beef and you have Pollo Saltado.  The ingredients seem a bit of a stretch together, but really come together nicely.  The sauce was fantastic.  By far the best part of the dish.
We also ordered Aji de Gallina ($10.25).  On the menu it was described as being a shredded chicken in a spicy, nutty sauce.  I tasted neither nuttiness or spice.  In fact, I’m pretty sure it was the same sauce used with the yuca.  However, I can say the chicken was excellent.  Clearly the kitchen staff know their way around.  I wouldn’t order this Aji de Gallina again though.  Part of the experience of eating food you don’t know much about is finding food you like as well as dislike. 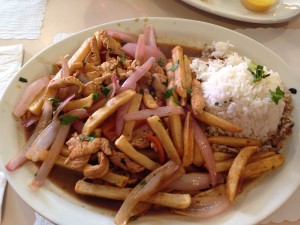 Service: The service was adequate. We arrived at a strange time on a Sunday afternoon and were seated promptly.  The waiter was quick to suggest different appetizers and was pretty polite in correcting my mispronunciations.  I feel like language was a bit of a barrier.  Based on the clientele I saw I’m sure most of the day our waiter spends speaking Spanish.  I don’t use that as an excuse for lax service, nor as a knock on his English but it noticeably took him out of his element.  I didn’t ask many questions about the menu as a result of our initial interactions. 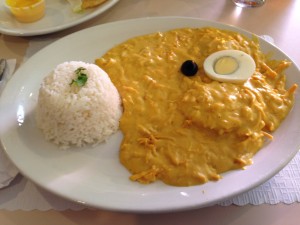 Ambiance: Some restaurants don’t get a full review of ambiance.  They’re either adequate or forgettable.  Pisco’s is neither.  It certainly has an energy to it.  From the disco ball on the ceiling, to the very poppy Spanish music, from the crooked framed artwork to the mirrored ceiling tiles, Pisco’s offers a very mixed bag.  The combined DJ booth and office space stationed next to the glass retail counters give the place the impression that it’s only a restaurant because they can’t get people to dance until after sundown.  I intend to head back during World Cup soccer this summer.  I’m sure it will be a fun environment. 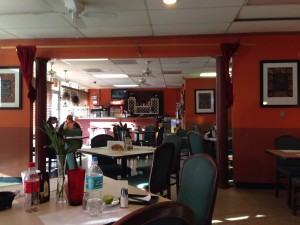 If you are looking for something a bit out of the mainstream and don’t mind a borderline bizarre dining room, Pisco’s Peruvian is a good bet. 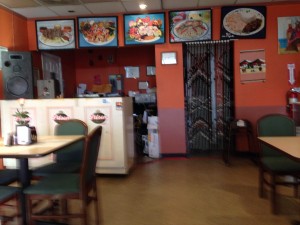