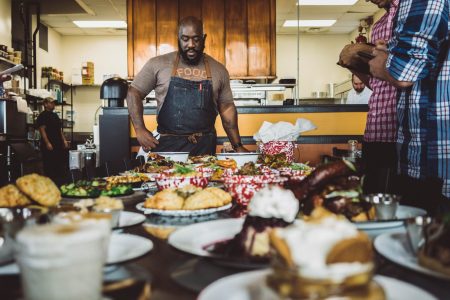 Ask Chef Kenny Gilbert what his biggest career accomplishment is and one might think he would say it’s his appearance on Top Chef Season 7 where he made it all the way to the “Restaurant Wars” episode. Or maybe it’s when he appeared on Food Network and beat Bobby Flay on “Beat Bobby Flay” and was the last chef standing on “Cutthroat Kitchen.” Or it has to be when he’s cooked for Oprah Winfrey and other celebrities on multiple occasions.

However, Chef Kenny would be quick to say that those milestones, while certainly feathers in his cap, all led him to where he is today, a burgeoning restaurateur with 2 successful operations here in northeast Florida: Gilbert’s Underground Kitchen in Fernandina and Gilbert’s Social on Southside Blvd in Jacksonville. So I think if you ask Chef Kenny what his biggest career accomplishment is, he’ll tell you it was making it through 2016, celebrating Gilbert’s Social’s 1-year anniversary virtually debt free.

I know what you’re probably thinking, “Well, he’s Chef Gilbert. He’s a celebrity chef. Of course he would be successful” however, being a celebrity chef does not automatically equate to success. Chef Gilbert’s fellow chef-testant and winner of Top Chef Season 7, Chef Kevin Sbraga, opened up Sbraga and Company here in Jacksonville with much fanfare in 2015, but quickly shuttered its doors with no warning about a year later. Chef Hugh Acheson, another high profile celebrity chef, launched The Florence in Savannah, GA in 2014 only to close up shop this past June 2017. No matter who you are, venturing into the highly competitive world of restaurants is certainly not for the faint of heart. 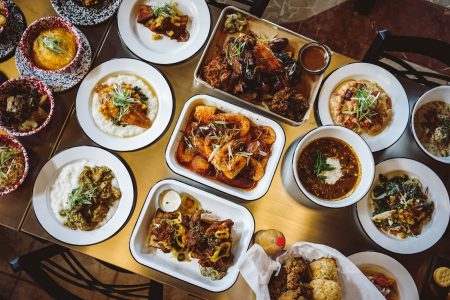 That’s why celebrating the 1-year anniversary of Gilbert’s Social is so meaningful to Chef Kenny. During 2016, there were some real doubts as to whether Gilbert’s Social was going to make it.

Let’s take the way-back machine back to August 2016.

After establishing Gilbert’s Underground Kitchen as a raving success, Chef Kenny, with the moral support and financial partnership of his wife, launched Gilbert’s Social. Things were going swimmingly with a big social media push and a couple of sold out Yelp! Elite and other foodie events. Everything was great until the beginning of September 2016 when Hurricane Hermine swept through Florida. Gov. Scott declared a state of emergency and Chef Gilbert was forced to shut down Gilbert’s Social and Gilbert’s Underground Kitchen for about 3 days. Then in October 2016, Hurricane Matthew came through and once again, Chef Gilbert had to shut down both of his restaurants, this time for about 5 days.

Being shut down for 8 days in a two month span is enough to make any restaurateur lose sleep, but it wasn’t just those 8 days. For weeks after both hurricanes came through Florida, people were cleaning up and repairing their homes. No one was thinking about going out to dinner. In total, Chef Gilbert estimates he probably lost about $70,000.

For the better part of the year from August 2016 until just recently, Chef Kenny was living on credit and a prayer. He was able to secure a few loans and lines of credit to stay afloat, but without positive cash flow, he didn’t know if he was going to make it. He reached out to business partners to invest not only on his previous successes, but also on what the future could hold. He was still able to do events around the country, capitalizing on his television success and connections. Those appearance fees, which normally would’ve gone to him personally, went straight back to his businesses, making sure his staff was paid and the lights stayed on. During this time frame he took a very minimal salary for himself. Every spare penny he earned doing appearances and events he poured back into his business. He fought and clawed his way back from what could’ve been another restaurant closing statistic to remaining open, paying off all his loans in a year, and becoming a success when most others would’ve folded. 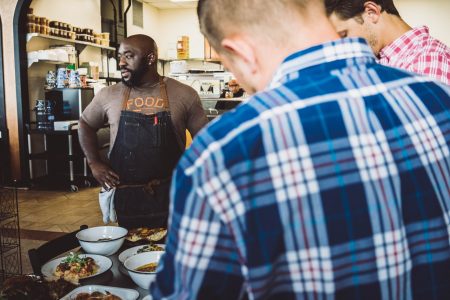 Chef Kenny Gilbert at the helm

I asked him to reflect back on his turbulent 2016 and what it takes to be a successful restaurateur. He gave me 4 simple answers: a strong support system, building relationships, interacting with the community, and knowing your financial numbers.

Chef Kenny shared he wouldn’t have made it through without the support and partnership of his wife. The business relationships he nurtured and cultivated with the opening of Gilbert’s Underground Kitchen allowed him access to capital to keep Gilbert’s Social open. The community relationships he built in and around Jacksonville helped him get customers through his door. And keeping a close watch on his financials to the level of a forensic accountant, allowed him to make sure his staff was taken care of and aggressively pay off his debts.

I asked what the future holds for Chef Gilbert. He’s actively looking into expanding his restaurant empire locally in the Five Points neighborhood and regionally in cities like Orlando, Atlanta, and Birmingham. And then, the world.

With grit, determination, a maniacal level of hustle, an affinity for accounting, and a bit of luck, Chef Gilbert shows that surviving and thriving in an ultra-competitive industry is possible. 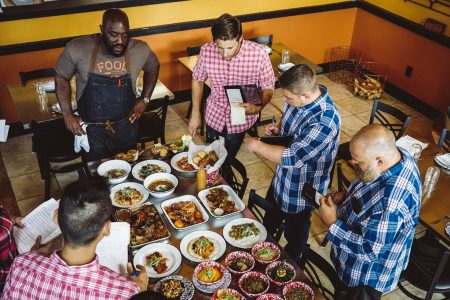