When reflecting on the grandeur and eloquence of a quality first-meal, dubbed “breakfast” by the plebeians of our culture, it’s hard to capture all the nuances. From the way the Lucky Charms gently bob to and fro in the almond milk that one can’t convince a mother not to buy, to the way the s’mores Poptarts smell after you toast them to a gentleman’s medium rare. Because of its paramount importance, we consider ourselves fortunate enough to have first-meal alternatives other than the imminent sugar coma that our poor choices lead to. There are a number of establishments in the 904 that do breakfast alright, but why have alright when you can have Jax Beach Brunch Haus?

We try to live our lives on the edge so we decided to scope out the joint on opening day, which is always an interesting choice because often times a restaurant still has a lot of tweaking to do. We can say that Brunch Haus is doing a lot of things right. The feel is incredibly relaxed due to the very casual feel of dining area, and the outside seating had a cool vibe as well. An element of innovation is the bar that you have the option to dine at, which pairs well with the Haus’s abundance of breakfast beverage choices. On the flip side, there was some confusion walking into the restaurant. The first of the party to arrive stood around uncomfortably for a few minutes waiting to be acknowledged by a server or hostess. Turns out (at least this particular day) it was seat yourself so their awkward leaning back and forth on one leg and attempting to make eye contact was in vain. And because of the dynamic tandem that we are, we are comingling our dining experience for our reading pleasure. But, we have two different mouths (if we didn’t that would be weird as hell) so the below items are marked with an (Evan) or a (Brittny) to denote the eater and descriptor of the foods. 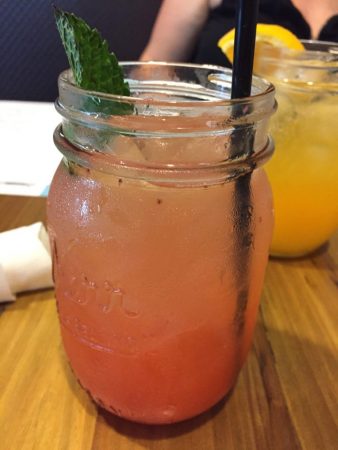 Once seated, our server was chipper and had some really great recommendations about the menu. I would strongly recommend asking your server about the menu rather than making assumptions, as there are some real hidden gems worth finding out about. The menu options are abundant and it’d be easy to be overwhelmed by having to choose between classics and innovators. In particular, we are referring to the “Brilliant Brunch” section of the menu. You choose the actual menu item you’d like, such as an omelette, a hash, a wrap, etc, and then you choose the topping combination. Definitely ask the server’s preference as well, because I was recommended the Hash ($7), Haus style (+ $5), and it didn’t disappoint. I was a little nervous about getting a hash and about corned beef with it, primarily because I had a bomb Mexicali Wrap at the previous establishment. However the choice I made turned out to be both more flavorful and more of what I think a great breakfast dish is than what I was originally considering. (Evan)

You are given starch options for the hash and I’m a straight home fries kinda guy. I requested my egg over-easy for that yolk factor. My one speedbump was that when the egg came out it was much more over-medium and the yolk didn’t run. That being said, both the server and the owner came to check on us and both offered to bring another egg correctly cooked, which is reassuring as a diner. Regardless, the dish was great. The way the corned beef added to the flavors opened a new wormhole of breakfast possibilities, and it was a very filling and tasty dish. (Evan) 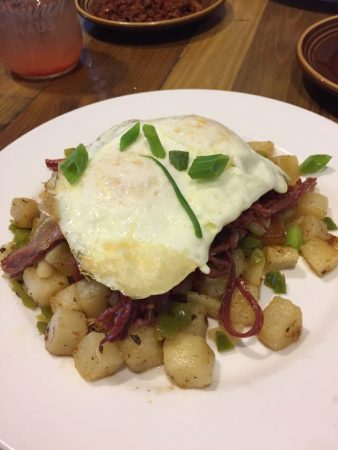 But because of the monster I am in the morning, I got a pancake as well. The hash had turned into an even more wonderful choice because it typically comes with a side of bread, but I was told I could upgrade to pancakes. I am still a little ashamed at the ridiculous amount of joy that information brought me and of the look of child-like wonder and joy that burst across my face (Sidenote from Brittny, he truly was more excited than I’ve ever seen him), but I am not ashamed of destroying that pancake like Jason Myers destroying the dreams of Jags fans. Honestly, everyone kind of has the idea that you can’t screw up pancakes. But holy crap guys, this was a good pancake. Like, just overall quality. If loading your body full of carbs is wrong, than I don’t want to be right. I also want another stack of those pancakes right now… (Evan) 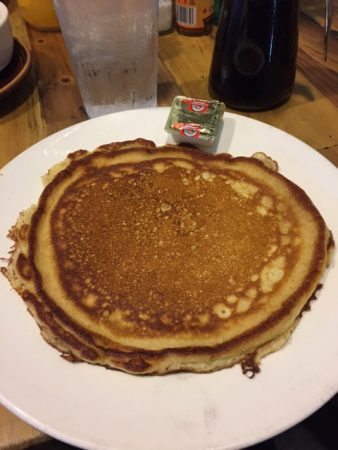 Alright lovelies, it’s my turn to talk about my breakfast items and the great choices I made off Brunch Haus’ impressive menu. I judge all establishments by their Eggs Benedict because every ingredient is an opportunity to show love and respect to the diner with homemade components or to scare the diner off with mass produced premade components. Listen up people, Brunch Haus is doing it right. There are 5 “Bodacious Bennis” to choose from at Brunch Haus. I opted for the Smoked Salmon Benni which included the obvious smoked salmon, poached eggs, hollandaise, capers, and red onion ($14). Let’s build this benni. Step 1: the English Muffin. Too often English Muffins are toasted to becoming mouth razors and are difficult to cut much less chew. This was crisp but soft, both Evan and I were enamored with the level of toasty-ness. Step 2: the Smoked Salmon. This was abundant, flavorful, and tender. It was thinly sliced enough where it was easy to make bite size and covered the entire English muffin, which shouldn’t be a concern but many places skimp. Step 3: The Poached Egg. Unlike Evan’s egg, mine was perfectly poached. My best friend jokes I’m going to go to jail over assaulting someone over an incorrectly poached egg, and she’s likely not wrong. Brunch Haus knows how to poach an egg, which should be Breakfast 101. Step 4: The Hollandaise. Thank you Brunch Haus for making your own and not using jarred or packet. Thank you. THANK YOU. Expect creamy yolky not too acidic heaven on these bennis. Step 5: Capers and Red Onions. Both were heavy, which results in my only complaint. Red onion destroys the flavor of all things when in excess. These should be cut thinner and more evenly and the quantity reduced slightly so as not to overpower. I went the route of knocking them off the top with my fork. (Brittny) 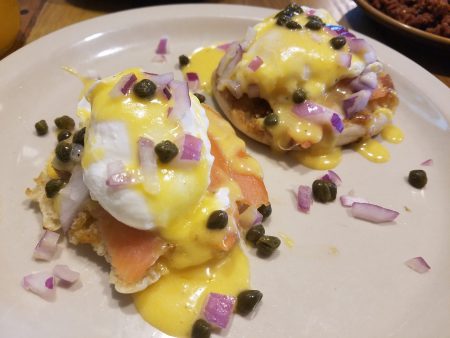 For side options, I ordered the grits ($3) and the vegan chorizo ($4). Evan despises grits (I know, I know. Take it out on him) so I got to eat them all and they were delicious. They had great stand alone texture which means they’re tended to correctly when cooking, they had a light mild nutty cheese flavor, and were creamy and comforting. Anything you could want in grits, really. The vegan chorizo is made by Zen Butcher company, who is killing it in the vegan game right now. The texture is remarkably similar and was seasoned exactly how chorizo should taste. It was missing the bite of sausage, which is hard to recreate. It’s an excellent substitute for our vegans out there who want to brunch so hard. They also offer vegan breakfast sausage links from Zen Butcher. (Brittny) 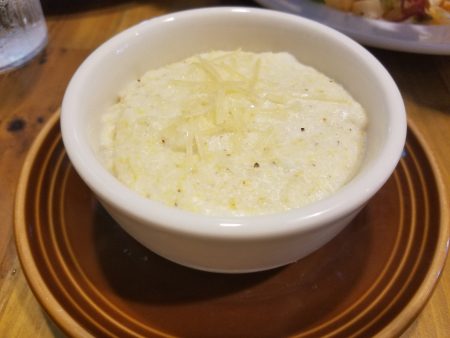 Because of how swanky our posse is, we tried a couple of the big-boy breakfast beverages as well. What I would say about their alcoholic beverages is: regardless of what you get, it will be delicious, and the alcohol will be poured generously. And both of those things are rad. What I can note about mine was that is was fruity and sweet, and the mint provided a refreshing twist. (Evan) Mine was citrusy in a way all Florida restaurant beverages should taste without being overly sweet like many fruit concentrates lend. (Brittny) The drinks average around $6 and are well worth it for the amount of alcohol mixed in. 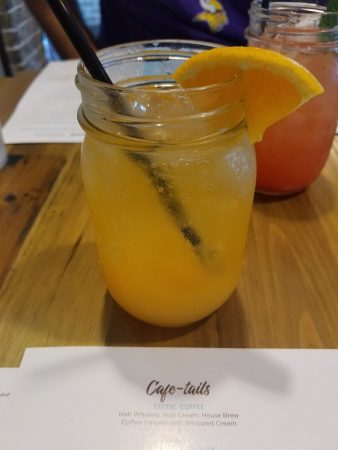 Overall, much like Count Chocula is a must-buy at Halloween time, Brunch Haus is a must-try brunch staple in the Jacksonville area. They’re locally sourcing a refreshing amount of their ingredients from our amazing Jacksonville businesses including Zen Butcher, Bacon Farms, Azar Sausages, and Volcanista Coffee so not only are you supporting a local restaurant, you’re extending your support to our local farms and growers. Go check out Brunch Haus, and a quick pro tip, buy a bottle of champagne and the boss man will legit sing opera to your table. And not in an annoying way, in a stop-what-you’re-biting-and-listen way. He’s classically trained and it’s amazingly beautiful. That’s gotta at least be worth a visit.