Gusto, an Italian restaurant on Beach Boulevard near Penman Road, is a brand new addition to the Jacksonville Beach food scene.  Owners Walter Bianchi and Tonino DiBella are long-time Jacksonville business owners and are passionate about traditional Italian cuisine.  Their goal is to use fresh ingredients in their food and to capture “a taste of Rome” in each dish.  Chef DiBella has been cooking up Italian fare at his various restaurants all over town since 1986.  And apparently he has gained quite a few devoted fans over the years.  Even though Gusto just opened a month or so ago, it seems that the restaurant has already become a popular spot for both good Italian food and live entertainment.  While Jacksonville already has it’s fair share of Italian eateries, we were eager to try out this new one and see if it could earn itself a spot on our list of go-to favorites. 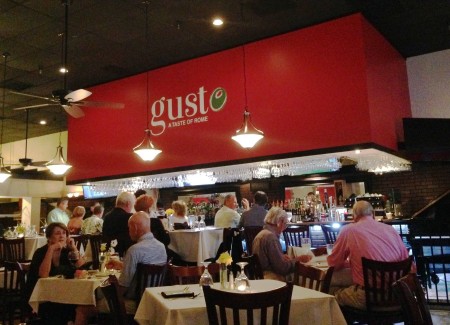 Right away, we could tell that Gusto was not like other Italian spots we’ve tried in town.  The ambiance and atmosphere was not at all what we were expecting.  The space is large and is crammed with plenty of tables that we felt may have been a tad too close together.  It felt like we were sitting uncomfortably close to the tables next to us, especially given the somewhat lively behavior of some of our fellow diners.  On one wall is a stage area for live music, an impressive fully-stocked bar, and then an open viewing pizza kitchen towards the back of the space.  There is also a row of a few slightly more intimate booths tucked away on one wall at the back of the restaurant. These more private booths might be a better bet for those of us who don’t want to feel like we are sitting right on top of the diners next to us.  We had dinner at Gusto on a Thursday evening and were surprised to find that the place was absolutely packed.  We were expecting to have a nice, quiet, relaxing meal and enjoy some good conversation.  Our meal was pretty nice, but it was anything but quiet.  There was live music on the night we went and it was really good music, which we appreciated.  But the music along with the rowdy silver-haired crowd that filled the place, made for a boisterous, party-like setting that was more like a bar than an upscale restaurant.  It was tough to even hear each other, much less carry on an actually conversation over all the noise. 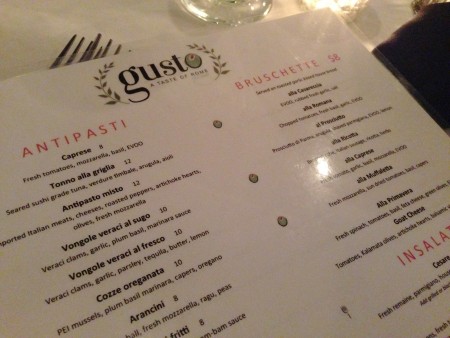 Much like the atmosphere and mood at Gusto, the service also got more frantic and went downhill as the night went on.  The hostess was friendly and seated us right away when we arrived.  Our server was also pleasant and charming and he started off as very attentive.  But as our meal went on and more and more people showed up, our server became flustered and struggled a bit with some of the larger parties he had.  It was a little sad to watch and we felt bad for him more than anything else.  It was clear by our initial interactions with him that he was a good server, but there was just too much demand placed on him by his larger, more rambunctious tables.  Gusto could probably benefit from having more staff on hand during busy nights like this, especially to cover the more rowdy and demanding large parties.  Having the tables so close together did not help either.  We noticed that at times, it was tough for servers to even get past each other while moving from table to table.  Add to that the dancing up front by the stage and diners getting up to mingle with other tables and the mood was edging on mayhem. 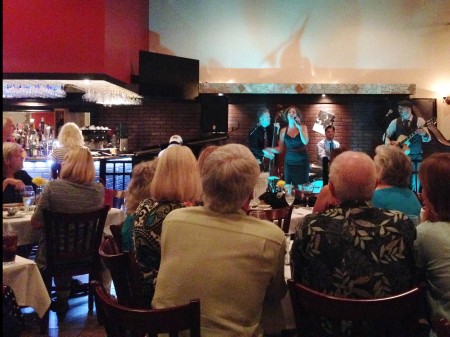 Although the ambiance and service was a bit iffy, the food at Gusto was decent and had a real comfort-food feel to it, which was nice.  We started out with two different types of bruschetta – Proscuitto and Goat Cheese ($8 each for a generous plate of bruschetta).  Both were delicious.  The prosciutto bruschetta had a light, fresh flavor thanks to arugula and a squeeze of lemon.  The goat cheese bruschetta was my favorite.  I love goat cheese anyway, so I was already a fan when the plate came out and the slices of bread were piled high with toppings.  The addition of fresh tomatoes, kalamata olives, and artichoke hearts gave it a rich Mediterranean flavor.  The balsamic drizzle on top tied everything together nicely.  Both of the bruschetta that we had were great, but if you’re not a fan of prosciutto or goat cheese, Gusto offers several other varieties of bruschetta, along with an extensive menu of antipasti and bar tastes.  It would be easy (and tasty) to fill up on just appetizers as a meal.  And the portions are generous enough for sharing, too. 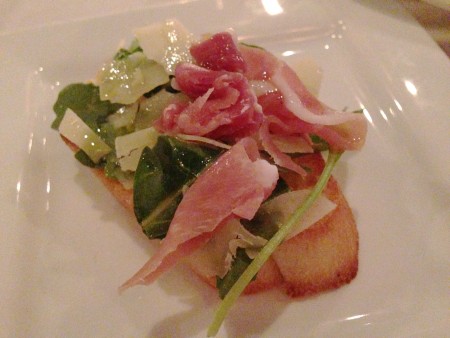 For our entrees, we had the Salmon allo Scoglio ($24) and the Veal alla Gusto ($22).  Both came with either salad or soup.  The salad that came with my husband’s entrée was ok – nothing new or exciting.  But the creamy ceasar house dressing was really nice.  I opted for soup with my entrée and chose the pasta fagioli.  This pasta fagioli had a pretty good flavor.  It was thicker than I’ve had before and the broth had a creamy consistency to it.  The beans, pasta, and bits of pancetta made for a hearty, flavorful soup.  The only drawback was that the soup was not hot enough.  It was actually quite lukewarm.  And because the place was so busy and our server was so bogged down with his other larger tables, I didn’t see the point in sending it back to be warmed up.  I knew my entrée would be arriving momentarily anyway.  And luckily, my entrée more than made up for the tepid soup.  My salmon was served with plump juicy shrimp and an amazing buttery brandy sauce.  The sauce alone would be reason enough for me to order the dish again.  It was rich and delicious and a bit of dill added a nice freshness to it.  I was really most impressed with the preparation of the salmon.  It was cooked beautifully.  I’ve had salmon at other places before where the middle is either overdone and dry or the total opposite…mushy and undercooked.  Neither is pleasant to eat.  This salmon was cooked perfectly and was flaky and juicy throughout. 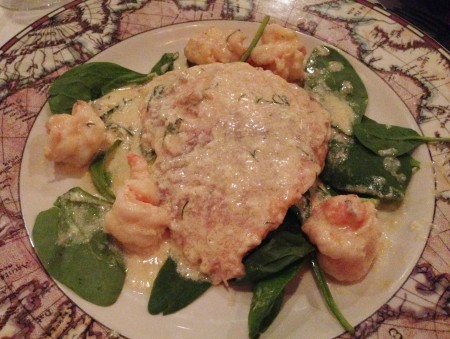 While my salmon dish was a big hit, the Veal alla Gusto was just ok.  We were expecting juicy veal medallions (as noted on the menu) but instead got much smaller chunks of meat.  So, that was a bummer.  Otherwise the pasta was cooked well and the flavors of the artichokes and sundried tomatoes were nice.  But the flavors were really nothing new or groundbreaking…just straightforward flavors that we’ve had many times before.  We probably wouldn’t order this particular dish again, but would instead opt for something a little more exciting. 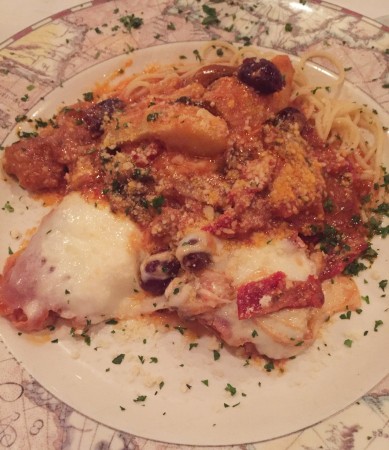 I have mixed feelings about Gusto.  The food was pretty good, although a little overpriced.  The service started out great, but got slower and more frazzled as the night went on and the place got busier.  But really, it was the atmosphere that caught us off-guard.  We were hoping to find a new relaxing go-to date night spot.  Instead the place was loud, crowded, and felt more like a club or bar.  We would have loved to stay for dessert (the Almond Tiramisu on the dessert menu sounded heavenly), but we just couldn’t deal with the crowd and the noise anymore.  And who knows how long it would’ve taken for us to actually get our dessert?

Despite our loud and rowdy first experience, there is a lot of potential at Gusto and we are definitely willing to give it another shot.  We are looking forward to going back on a night when there is not live entertainment so we can maybe actually have a conversation without having to shout over the crowd.  We are also looking forward to trying their pizza from the pizza kitchen, as well as more of their yummy bruschetta.  We will just have to check out their events page first to plan our evening accordingly…or bring our earplugs with us. 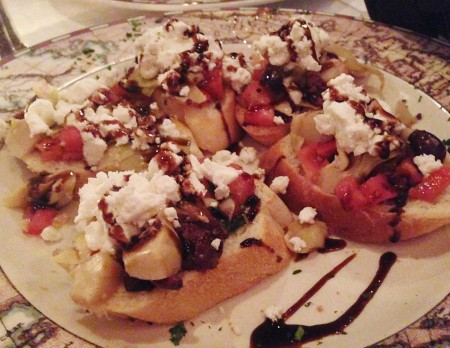