Following what has become a national trend, Jacksonville has become extremely populated with cupcake places. A few years ago, if cupcakes were the craving of the day you’d have to stop in at a traditional bakery and opt for choosing between a handful of flavors. Variety was certainly lacking with that method. Now, cupcakes have become a gourmet food by themselves and there are “cupcake boutiques” all over the city. At this point, a cupcakery really has to do something special to stand out from the crowd. After a chance stop in at Cupcake Girls in Jax Beach last week, I am confident that I have found my new go-to cupcake restaurant. 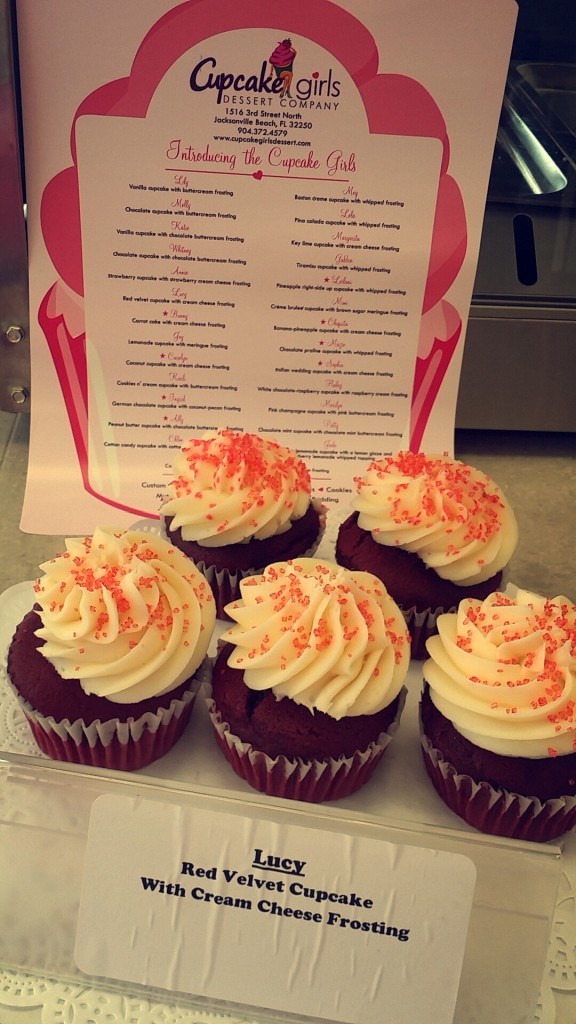 Cupcake Girls is located right next to Metro Diner in Jax Beach, which is how I found them. I was cranky and figured a cupcake was the perfect remedy to cheer me up that day, so I swung by after lunch to take a look at their flavors. The inside of the bakery is absolutely adorable. It is bright and cheerful and everything you’d want for a bakery atmosphere. I perused their front case of cupcakes and was trying to decide between those options when the manager, Jade, showed me there was a side case filled with even more cupcakes. I’m so glad she showed me the side case because I actually wound up choosing all my cupcakes from that case. There is a fantastic variety of chocolate cupcakes, fruit cupcakes, and traditional cupcakes. All the cupcakes have cute names and are displayed with descriptions on their pedestals so you know what you’re getting. For myself I chose the “Joy”, and for my coworkers I purchased the “Carolyn”, “Margarita”, and the “Lucy” (All $3 per cupcake). After I had checked out, I asked Jade what her favorite cupcakes were, and she said that the one named after her was her favorite. The “Jade” is a strawberry lemonade cupcake, which will definitely be on my next order. She also recommended the Twix cupcake, which looked decadent and perfect for chocolate lovers. Jade also told me that her and the owners meet together and come up with all the flavors, and she bakes them daily in the store. It was so evident that Jade has a passion for what she does, which I absolutely love seeing in small business managers. 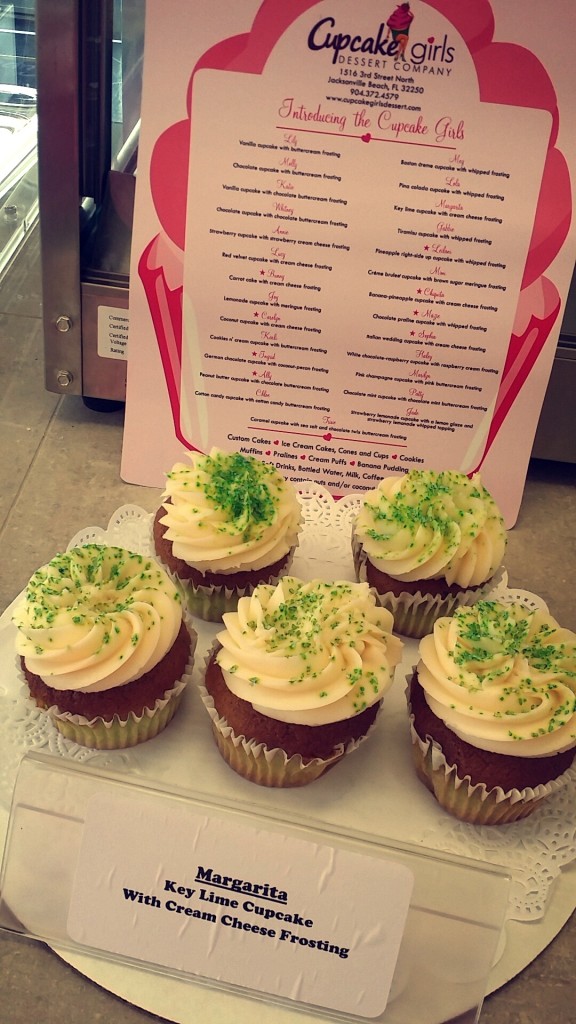 As soon as I got back to work I dove into the “Joy” cupcake, which is a lemon cupcake with lemon cream cheese frosting and a sugar crystal topping. Lemon cupcakes are my favorite and I have eaten them from quite a few bakeries in Jacksonville and this one was by far the most impressive. The icing was not overly heavy and had the perfect amount of tart lemon. My closest comparison would be to a lemon ice pop. The cake was rich and tasted like it had a lemon glaze on the top between the cake and icing. The sweetness of the cake perfectly balanced the sour lemon flavor in the icing for what is truly the best lemon cupcake I have ever eaten. I can’t wait to try the strawberry lemonade “Jade” cupcake in the future! The “Lucy”, which is a traditional red velvet cupcake with cream cheese frosting, went to my coworker. She described the frosting as having the traditional cream cheese sweetness, but not overbearingly so. The icing was balanced perfectly with the dense red velvet cake flavor. She noted that she had only had one red velvet cake that was even in the same ballpark as this cupcake and it was from a very old restaurant in Harlem, so she would definitely rank it as her favorite in Jacksonville. My other coworker tried the “Margarita” cupcake, which was a key lime cupcake with cream cheese frosting and sugar crystal topping. She could not stop raving about the frosting. Between bites she complimented the wonderful lime flavor to the cake, but the frosting was her favorite. Something about Cupcake Girl’s cream cheese tastes way better than most places. It’s very airy and whipped and isn’t as overbearing as some cream cheese frosting can be. I often feel that cupcakes that lack flavor in the cake are covered in cream cheese frosting to mask that deficiency, but this is definitely not the case at Cupcake Girls. The frosting only accentuates the cake flavor here. The final cupcake, the “Carolyn”, went to me by default of no one else needing cupcakes, and I was more than happy to try a second cupcake. The “Carolyn” is a coconut cupcake with cream cheese frosting and toasted coconut garnish. The cake is fantastic. Every bite of the cake has shredded coconut in it. Don’t get me wrong, the cream cheese frosting was still delicious, but the cake was incredible. The toasted coconut on top was a perfect lightly crispy compliment that added the perfect extra amount of coconut. I’m glad this one didn’t have the granulated sugar like the other cupcakes, the toasted coconut was the perfect choice. The lemon “Joy” was still overwhelmingly my favorite, but I wouldn’t turn down the “Carolyn” if offered.
After perusing their website, I see that the Cupcake Girls also offer custom cakes, specialty cupcakes, ice cream, cookies, cream puffs, pralines, and muffins. They also list that they are fully willing to customize and design cakes or cupcakes for events. I’m willing to bet that the quality of their cakes is equal to their cupcakes. The thing that I really commend Cupcake Girls for is that there are no gimmicks to their cupcakes. They are beautifully flavored cupcakes with rich and extremely complimentary icings, which is all you need to have a great cupcake. There are no frills or extras, so you get to appreciate a well baked cupcake with perfectly proportioned recipes. Thanks Cupcake Girls for my new addiction, I will be a familiar face! 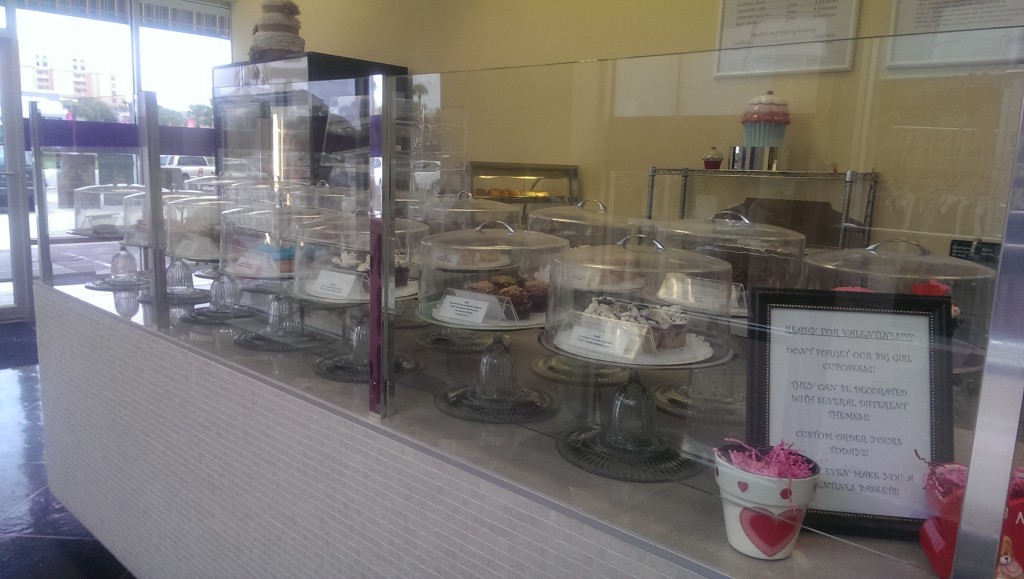 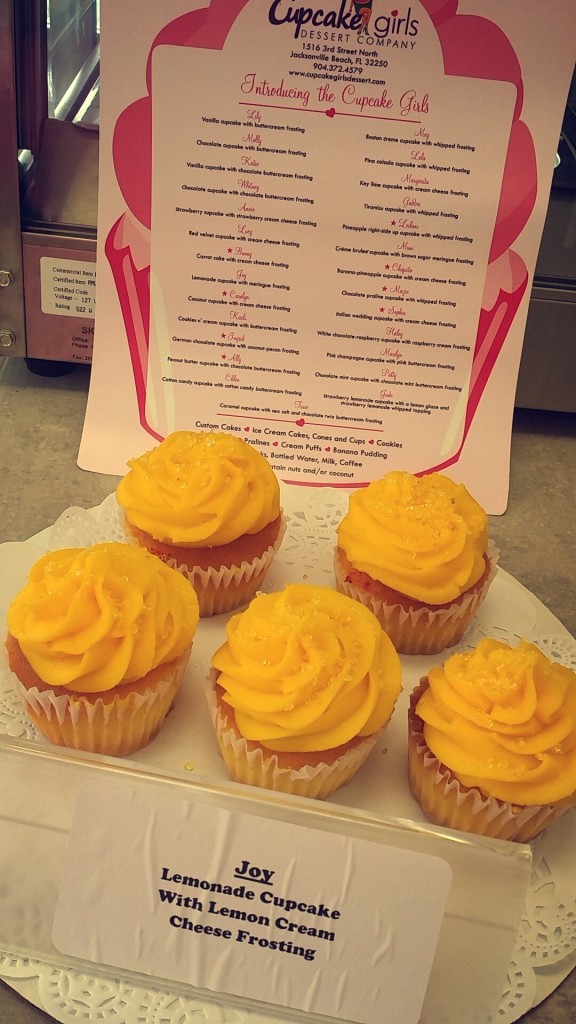 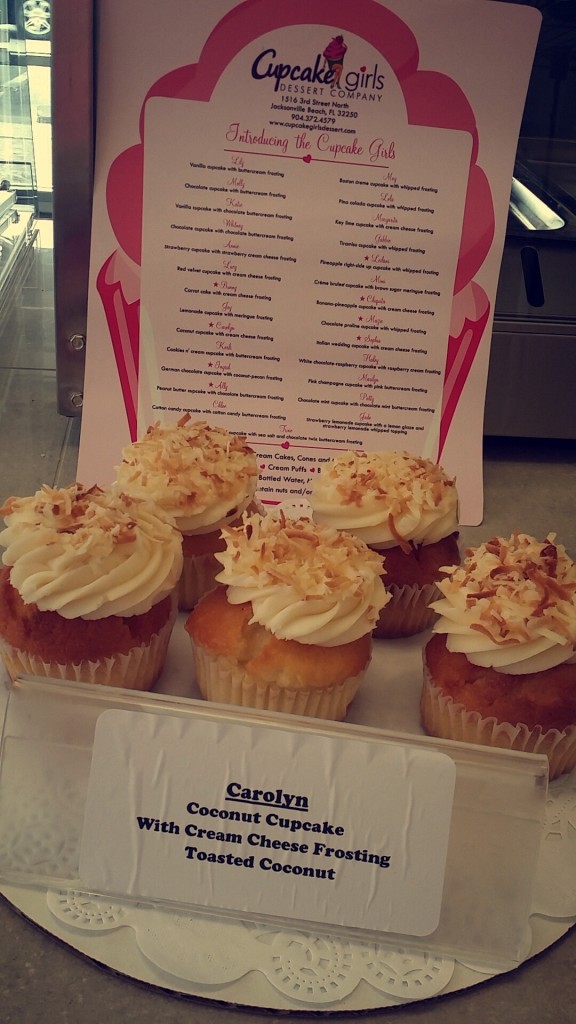