Visconde’s is no longer in business.

We had seen and heard of Visconde’s Argentinian grill for several weeks and were eager to try it. Visconde’s has 4 stars on yelp, so we figured we were in for at least an enjoyable meal when we finally made it there for dinner. Oy. We could not have been more wrong. The notable points were some of the chewiest meat we’ve had and instant mashed potatoes. Yes, instant mashed potatoes. Served in a restaurant.

We pulled in around 6pm on a Saturday. We were the only people in the place, which is slightly odd for dinner time on a Saturday. Our waitress seated us, went over drinks, and took our order. There were five wines available, so I decided to try the only Argentinian wine, a Malbec. Our waitress came back with water and apologized that they were out of Malbec. My second choice was a moscato. The waitress went to get it and came back, again apologizing. They were out of moscato as well. My third choice (Merlot, Chardonnay, or Cabernet) was the Cabernet. This time she came back with two glasses, explaining that it was happy hour, two for one. I don’t know, maybe I’m being picky, but it’s not Chili’s. I don’t need both glasses at once. Usually at nicer restaurants the waitress will hold off on the second glass until you are ready for it. Plus, I hardly ever drink two glasses of wine. Given that this was my third choice, I for sure was not going to be finishing both glasses.

Once we got past the drinks, we perused the menu. It was pretty basic. Almost all of it was meat, and not anything terribly exciting. Between the sirloin, breaded beef cutlet, and sample grill, we chose the sample grill. Five meats were listed: short ribs, flank steak, sausage, blood sausage, and Argentinian hot dog. It was $24.99 for one, or $48.99 for enough for two people. We ordered an appetizer and the sample grill for one which we intended to share. $50 seemed like an awful lot to spend on what we suspected more and more would be a mediocre dinner. 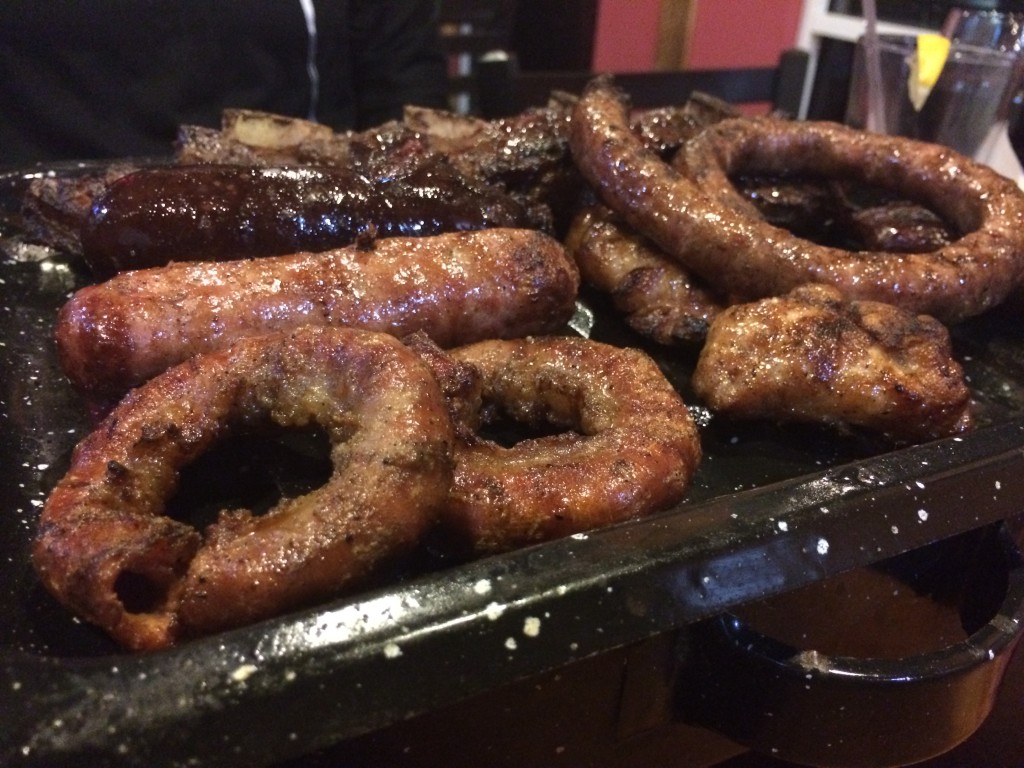 Our appetizer was provoleta, which is basically baked provolone cheese with spices, and slices of fresh bread to put it on. It was pretty good. How can you go wrong with gooey cheese and warm bread?

When the sample grill arrived it actually had two extra meats on it. One was sweetbreads(thymus gland not some sort of sugary bread) and the other we struggled learning the name of, but we’re fairly sure it was some type of intestine. It looked like a skinny, curled up, hollow sausage. It was much chewier than any squid I’ve ever had. I couldn’t cut it and then I couldn’t chew it. The sweetbreads were surprisingly good, if you like sweetbreads. The sausage was a good, mild basic sausage. The Argentinian hot dog tasted like a cross between sausage and what we know to be hot dog. It was just okay. The short ribs were chewy and not very flavorful. They were easily some of the worst if not the worst we’ve tried in Jacksonville. The flank steak was very good. If we just ordered flank steak we might have enjoyed our meal. But flank steak is only listed on the menu with the sample grill, not as a standalone entree. 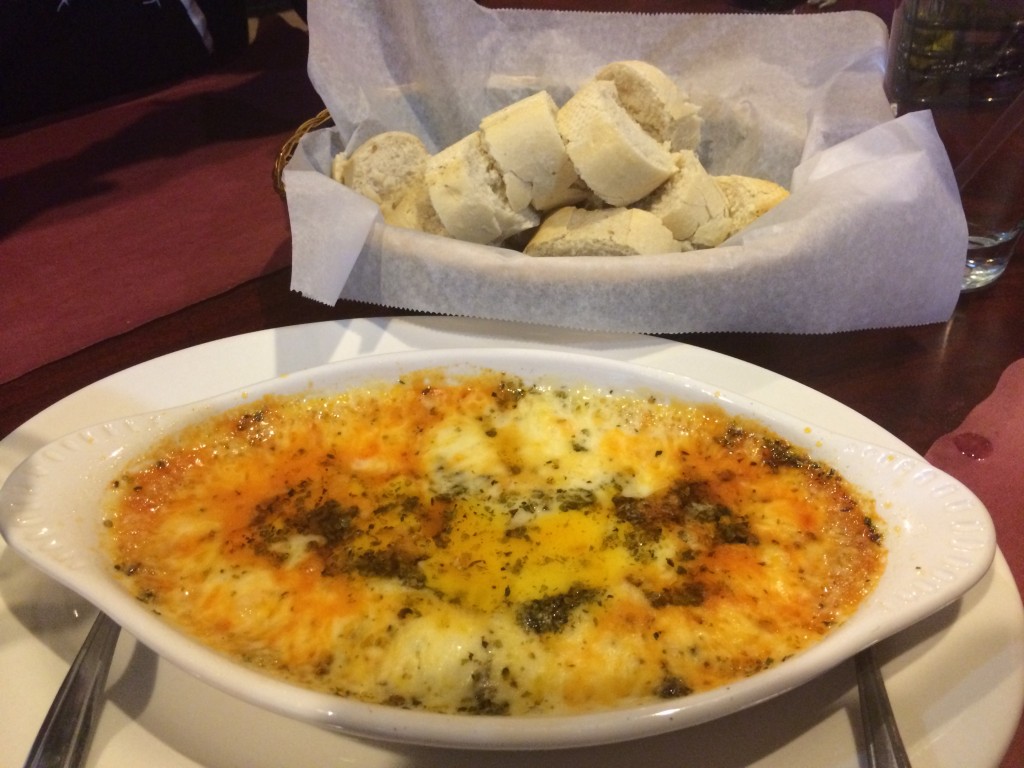 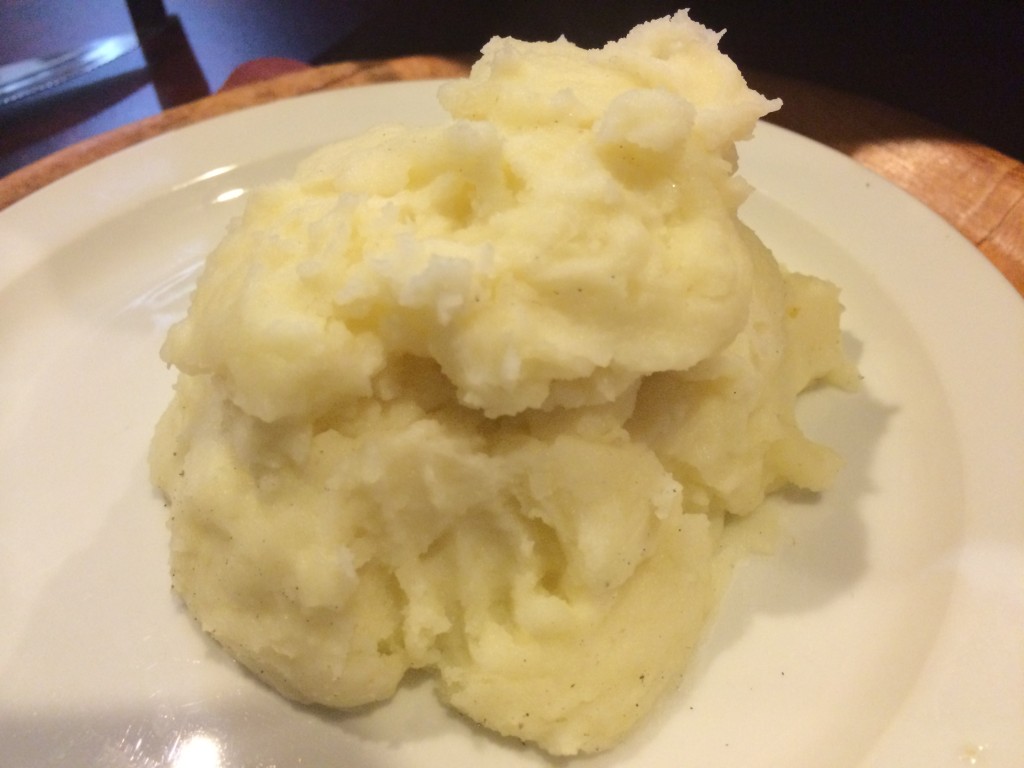 All in all, we just can’t recommend Visconde’s. I’d be surprised if they’re still around in a few months. They apparently have no communication when it comes to inventory, the menu is unimpressive, and they serve poor quality meat and instant mashed potatoes. I’ve never been to Argentina, but I’m assuming the food there is much better than what Visconde’s has presented. We might have been too nice in this review actually. This meal was so bad we ate only a couple bites of everything but the flank steak and then left. We picked up some fast food afterward to quell our appetites.