BBQ is always a good food choice year round, but for me, BBQ is always synonymous with summer.  So as the weather begins to get warmer and the calendar transitions from spring to summer, my hankering for the deliciousness of various smoked fowl and fodder begins to grow.  Jacksonville certainly doesn’t lack in BBQ restaurants, so finding a place to fill my belly with BBQ wasn’t difficult.  On this trip, we decided to try the blink-and-you’ll-miss it BBQ Barn, located on Mt Pleasant Rd in North Arlington.

BBQ Barn strives to be a fun place to eat. They have fun cartoon characters on the menu and offer things like Pig Wings and Duck Wings on the menu.  There’s a small dining area inside and a picnic table area if you prefer to eat outside.  The wait staff was friendly, but not very knowledgeable about the menu.  I would ask a question about it, and they had to go back and ask the cook to get the answer.  The menu was standard fare for a BBQ restaurant – various proteins such as chicken, pork, and beef served in various combinations with a choice of sides.  Sandwiches included pulled pork and chicken, as well as sliced brisket and ribs. 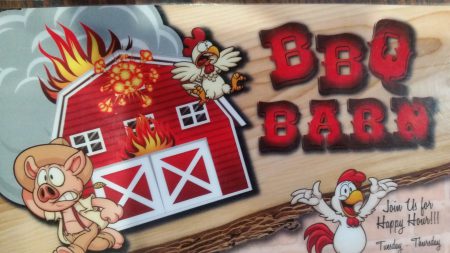 We decided to start with the wing sampler for an appetizer.  I was intrigued by the concept of “Pig Wings” and I’ve never had duck wings from a BBQ place, so I was looking forward to eating these menu differentiators.  The wing sampler came with six chicken wings, two pig wings, and two duck wings, pictured left to right, respectively.  The duck wings are smoked and deep-fried.  The pig wings are smoked pig shank pieces cut to resemble chicken wing drumettes.  The chicken wings are your standard chicken wings smoked and deep-fried.  All of the wings are tossed in your choice of sauce.  After seeing the sauce choices were name brand, pre-bottled sauces, I asked the waiter if BBQ Barn has a house-made sauce.  She said no.  I was shocked and disappointed that BBQ Barn didn’t have a house-made, signature sauce.  Granted, the bottled sauces were some of the better store bought choices (Frank’s Red Hot and Sweet Baby Ray’s), but a BBQ place not making at least one house-made sauce seems inexcusable. 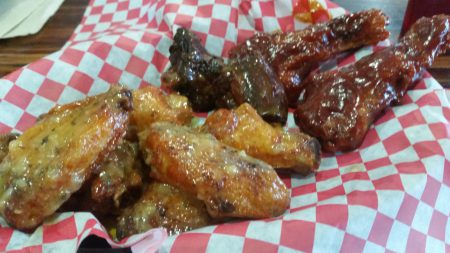 I chose the Garlic Parmesan sauce for the chicken wings, South Carolina Mustard for the pig wings, and Sweet BBQ for the duck wings.  The chicken wings, texturally, were good.  The skin was nice and crispy, the wing meat tender and juicy.  The sauce, on the other hand, was really off-putting.  It seemed less Garlic Parmesan and more Italian dressing with bits of garlic.  It was really acidic.  It was so acidic, I was surprised there was any meat on the bones when it arrived to my table.  The taste of the Garlic Parm sauce just seemed. . .off.  My dining partner put it this way, “Something tasted spoiled in that sauce.”

I was looking forward to the pig wings.  They seem like a whimsical addition to the menu and show that the owners of BBQ Barn have a sense of humor.  To the BBQ Barn’s credit, the pig wings did look like little chicken wing drumettes.  The sauce was just OK.  Again, it was bottled sauce, so nothing really outstanding there.  Unfortunately, the pig wings failed to fly.  They were overcooked, dry, and overly chewy.  They didn’t seem to disintegrate as I chewed.  I think they actually got chewier the more my jaw moved.  Not pleasant or whimsical at all.  The South Carolina Mustard sauce didn’t do anything to help.  Luckily the wing sampler came with a side of ranch sauce.

The duck wings were a surprise.  The Sweet BBQ seemed to go really well with the duck wings.  The meat was tender, especially after gnawing on the dry pig wings.  The smokiness came through.  There just wasn’t enough meat on the duck wing.  It seemed to be mostly bone, but overall, they were good.

For the main dishes, I ordered the Super Combo Platter.  With the Super Combo Platter, you can choose five meats from a list of six items – a chicken leg quarter, a couple slices of turkey, ribs, brisket, smoked sausage, and pork.  I chose everything except the pork.  You could also choose between a dry rub or St Louis Style (everything covered in Sweet Baby Ray’s BBQ Sauce).  I chose the dry rub since the tables were already stocked with a complement of sauces in case I needed them.  It came with two sides.  I chose Brunswick stew, a BBQ side staple, and mac-and-cheese. 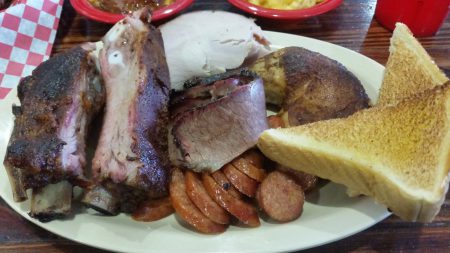 First the good.  The ribs were great.  They had a wonderful smoky flavor.  No sauces were needed for these ribs.  They created their own sauce with each bite.  The juices were running down my hand as I bit into it.  If I could’ve gone back and made my five choices all ribs on this Super Combo Platter, I would have.  Everything else on the plate paled in comparison to the ribs.  I loved them.

Now for everything else on the Platter.  The chicken leg quarter was just OK.  The chicken was tender, but the dry rub did nothing for the chicken.  The dry rub itself didn’t seem to have any particular flavor come through.  BBQ Barn’s dry rub didn’t have any notes of sweet, spicy, or smoky.  I could see the spice rub on the chicken, but I couldn’t make out any flavor, other than salt and pepper.  The chicken leg quarter was not memorable.  The smoked sausage wasn’t anything special.  It tasted like store bought smoked sausage, cooked in BBQ Barn’s smoker.  Which is really a shame because based on the menu, they get their sausage from Azar and Company, a local supplier.  I think it’s unfair to judge the supplier, but BBQ Barn didn’t seem to do anything to the product to enhance it, elevate it, or put their own “BBQ Barn” spin on it.  The turkey slices were fine, however, I couldn’t make out the distinct smoky flavor as much as I could with the other meats. 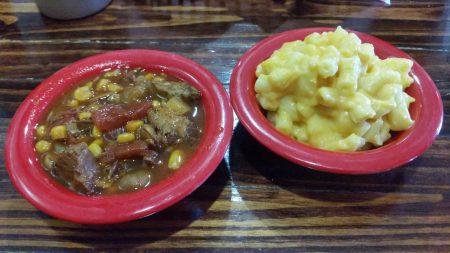 The brisket was the biggest disappointment.  If a BBQ place can only do one meat well, it has to be the brisket.  Brisket is a BBQ mainstay.  Most BBQ places live and die on how good their brisket is.  This brisket was awful.  It looked like it was sitting under a heat lamp for most of the day and all the moisture sucked right out of it.  It was dry and shriveled.  It was like chewing on a piece of leather.  Absolutely unforgivable for a BBQ place to have brisket this bad.

The sides of Brunswick stew and mac-and-cheese were also unremarkable.  The Brunswick stew seemed to have a brown sugar base and was a little sweeter than I liked.  Since Brunswick stew is made with the same meat usually found on the BBQ platters, it should have a little smokiness and a little spiciness.  It didn’t seem to have either.  I probably wouldn’t order it again.  The mac and cheese noodles were really overcooked.  It was mushy and didn’t taste very cheesy.  It tasted like a frozen TV dinner mac and cheese side dish.

My dining partner decided to eat a little lighter and ordered the pulled pork sandwich.  The pork itself had a good flavor, but suffered from the same malady as most of the other meats we ate today: dryness.  I had to douse the sandwich in sauce for it to have any kind of moisture.  On the plus side, if you mix the smoky and sweet BBQ sauce together, it actually makes a pretty good combination.  The pulled pork sandwich became much more palatable with the sauces.  I wished it could’ve stood on its own without the aid of store bought, pre-bottled sauces. 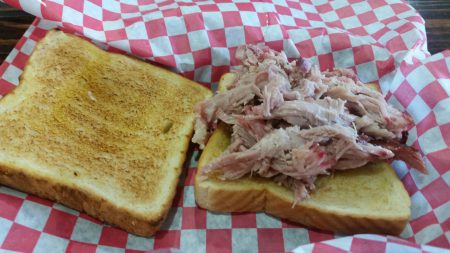 Overall, BBQ Barn was a huge disappointment.  I did a quick search of some the best BBQ places in Jax, and looking at their menu I saw one thing they all had in common: a signature sauce and signature smoking style.  Other than the ribs, all of the protein offerings at BBQ Barn were simply not good.  And if the protein isn’t good at a BBQ joint, then what’s the point?  Also, the lack of house-made BBQ sauces seems wrong and in a sense, a bit lazy. 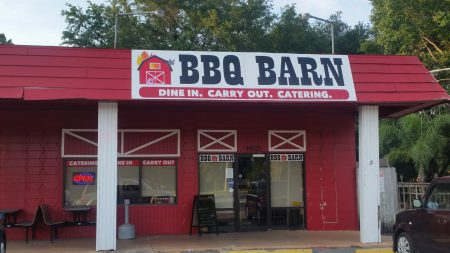 Note:  We made a separate visit to BBQ Barn where we tried both the pig wings and ducks wings.  On that visit we absolutely loved both.  The pig wings were moist, juicy, and delicious.  The ducks wings were easily one of our favorite dishes in Jax.  We’d make a trip back to BBQ Barn just for the duck wings despite the fact that the BBQ meats are pretty rough and the sauces are store bought.