We at JRR have a little secret – we are obsessed with the Daily’s Dash Deli.  In March 2013, Daily’s Dash quick service sandwich shops starting popping up inside gas stations around Jacksonville and they haven’t stopped yet.  There are currently 14 open delis with three more scheduled to open by year end.  Serving breakfast, lunch, and dinner, these delis have succinct menus that pack big, fresh flavor.  The chef behind the Daily’s Dash is Chef Robert Fallon.  With 30 years in the restaurant, resort, and club industry, Chef Robert designed the Daily’s Dash with gourmet food trends in mind, but without sacrificing affordability.  We sat down with Chef Robert recently to learn about his background and the concept behind this rapidly growing brand. 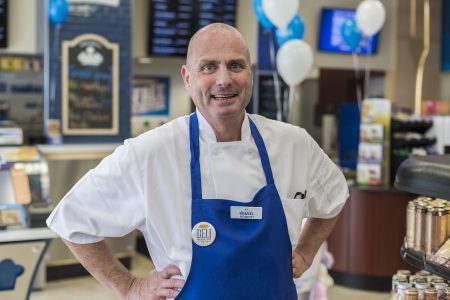 Chef Robert began his culinary career by attending the Culinary Institute of America in Hyde Park.  After graduation, Chef Robert continued his career in the hotel and resort industry.  For 25 years he worked for the Marriott before being ready to retire from that side of the food world.  “I wanted to get out of the hotel side after all those years,” he explained.  “It’s a tough gig and I had my fill.  After that, I was in the Northeast overseeing 110 business and industry units for Compass Group.  My family was down here and I was up there and I was trying to find a role down here.  It’s all about who you know.  The CEO here and I had some long distance conversations and he hired me to help create this brand we have now.”

Chef Robert was brought on as part of the Daily’s team when the owner and present CEO was looking to make a transition into quick service restaurants.  Chef Robert told us that at the time, it was a trend in the Northeast and was just beginning to spread to the South.  The CEO went on a search for someone to come on board and develop this concept, but needed someone with a strong culinary background.  Chef Robert said at that point, “One thing led to another and they hired me.  We went through about an 18 month research and development process.  He wanted a sandwich concept but it needed to be high quality.  He didn’t want to sacrifice quality or portion size for price or cost.  He wanted a great deli meat, that’s a mark of a great sandwich.  We vetted a number of different manufacturers and did blind tastings, including Boar’s Head, and we decided on Metro Deli.  It’s nitrate free and gluten free, and since our owners wife has celiac he’s passionate about that.”  From there, using the best ingredients, they designed a menu that was filled with a variety of sandwiches.  There is a customized section of the menu called “Deli Your Way” to brand themselves as a deli and also denote how the sandwiches are made to order.  Daily’s Dash uses no pre-sliced meat and they do not build sandwiches ahead.  Even with the fresh prep, the prices are kept slightly less than local chain competition.  Robert told us, “Fresh made to order is our mantra.  We wanted to bring chef crafted meals and use fresh breads.  We even use bacon that is all natural and thick cut that we cook in small batches throughout the day.  We get fresh bread every day.  Our biscuits are raw dough.  Our cinnamon rolls and cookies are all baked in house.  This gives us a leg up from people who are using frozen or brought in products.” 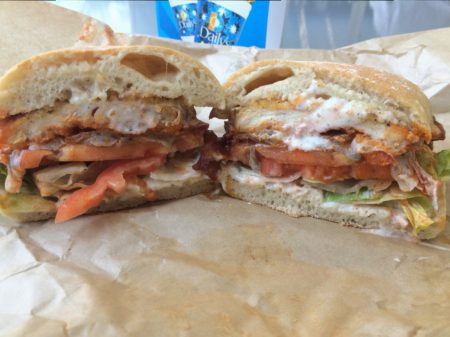 Lucky for Chef Robert, the owner of Daily’s Dash is an avid foodie and the two were active in the development process together.  Robert told us, “My owner and I collaborated from day one on what this would look like.  He’s a foodie so he had definite opinions on what he wanted to see on the menu.  We wanted variety without it being a giant menu because we just don’t have the storage for it.  Our biggest paradigm has been getting a good meal instead of convenience stores.  Once they try us, people are hooked.  They come back for more.”

So what’s on the Daily’s Dash menu that keeps us coming back for more?  First off, if you haven’t been, Daily’s Dash has an easy touch screen ordering system where you choose your category of sandwich or build your own.  The main categories include a grilled cheese category and a speciality category.  Best sellers include the Cuban Sandwich, which puts a North Florida spin on the traditional flavor by using a datil pepper mustard and the Kickin Pimento BTT which uses the same famous pimento cheese served at The Masters in Augusta.  There are also delicious breakfast sandwiches that feature fresh shell eggs, not pre-made egg whites that most fast food chains utilize.  Even the bread has immense thought put into it – the ciabatta bread is from La Brea Bakery in California, and the baguette is from Tribecca Bakery in Chicago.  From day one, Daily’s Dash was committed to quality, and they’ve continued since then to raise the bar on deli food. 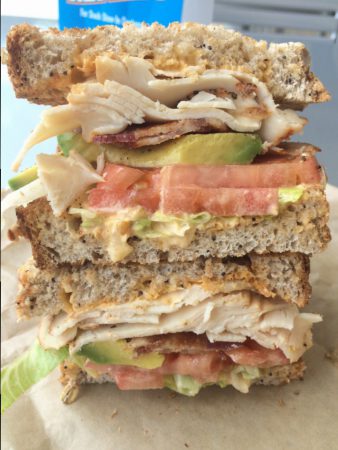 Chef Robert closely monitors national food trends to keep Daily’s Dash ahead of the game and prepared to satisfy their customer’s cravings for new and exciting menu items.  To add to their full line of fresh, barista made coffee, they’ll now be featuring a cold brewed coffee that just recently debuted at other national chains.  The salads are changing now from the previous only option of “build your own” to new set salads that include Buffalo Chicken, Asian Chicken, and a Power Salad with kale and other superfoods.  All of these options will be displayed on brand new menu boards that will be debuting across Daily’s Dash locations soon, and will feature the images of the sandwiches in rotation.  In addition to all these developments, Chef Robert is still innovating by researching adding piadinas (pressed sandwiches), a value menu, fresh grab and go sandwiches, yogurt parfaits, and protein platters.  Gone will be the days of stale gas station food, Daily’s will be packed with fresh, healthy, high quality items that will be sure to suit any need.

Daily’s Dash is not only innovating and creating, they’re staying ahead of the trends to provide their customers with nearly anything they could desire.  Robert summarized their daily operations by saying,“You have to take a look at what your competition is and take a look at the trends and see where food is going.  From there, we try to just put an unexpected spin on it.”  Ready to try one of the superb sandwiches that are fresh made just for you?  Daily’s Dash locations are open Monday through Friday 6 am to 8 pm, and Saturdays and Sundays from 7 am to 6 pm.  Whether you’re on the road and need a quick bite or you’re grabbing a meal to take home to the family, Daily’s Dash has you covered with their delicious and high quality offerings. 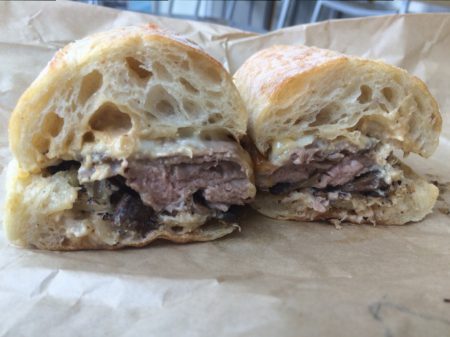