When Jollibee opened up their first restaurant in the Southeast here in Jacksonville, the 13,000+ Filipinos who call Jacksonville home were over the moon. However, when talking to my non-Filipino friends, the conversation went something like this:

So while Jollibee is just as Filipino as Pancit, to those outside of Filipino culture, it lacks some of the hallmarks of Filipino traditional cuisine. Where does one go to get traditional Filipino food?

Turns out, not that many places. Even though Duval County has the largest Filipino population in the state of Florida, making up 12% of all Duval immigrants and 35% of the city’s Asian community (Source: Jacksonville.com), it sorely lacks in Filipino-centric restaurants. In an extraordinarily non-scientific cursory search of Google, I only found about 6 or so traditional Filipino restaurants, including food trucks, in the Jacksonville area. In the grand scheme of restaurants in Jacksonville, that’s not much. I have a theory on this: Filipinos are a community-based culture with strong familial ties. Most Filipino families have a lola or nanay that spends most of their time in the kitchen and can cook up the neighborhood’s best dinuguan. So going out to a Filipino restaurant seems unnecessary. My own family is a prime example. My grandmother (or Mommy Malou as we affectionately called her) is a savant in the kitchen. She has hundreds of Filipino recipes locked away in her mind. When she cooks, no one goes out to eat.

So when I found JC FIL Cuisine and Karaoke tucked away in the corner of a non-descript strip mall on Beach Blvd, I was excited to see if it can measure up to my Mommy Malou. 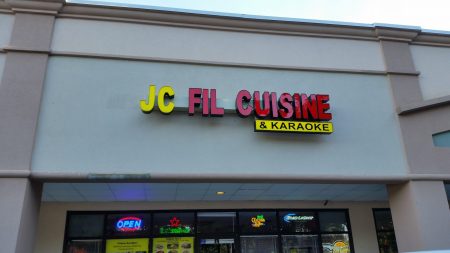 The restaurant is one large open space with a drink display case and cash register in the front left corner by the door to the kitchen. On the right, there is a small DJ booth and a karaoke machine. Filipinos love karaoke and the restaurant is set up so tables can be moved and the whole place can become a big dance floor. I normally ignore background music in a restaurant, but I noticed they were playing some of Karaoke’s greatest hits like “Alone” by Heart and “Don’t Stop Believing” by Journey, so it was kind of fun singing along quietly with subdued karaoke moves with my dining partner at the table. I can only imagine what Karaoke Night must be like.

JC FIL Cuisine serves a full menu from breakfast to dinner. Traditional breakfast items such as longanisa (sweet sausage) with rice and fried egg appear next to dinner staples like pancit, ginataan, and pata.

We decided to start with a couple of appetizers; lumpia and pork sisig. The lumpia were made in the traditional way with ground pork rolled in egg roll wrappers and deep fried. They were served with a Thai chili dipping sauce. These lumpia were delightful and addictive. You get a dozen in an order. You’ll only get 1 order, but you’ll wish you ordered 2. They were fried to a perfect golden brown. It had a beautiful crunch and the ground pork filling was delicious. Dipping it in the Thai chili sauce completed the experience. 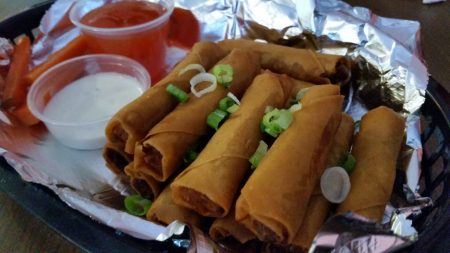 I was most excited about the pork sisig. Sisig is a traditional Filipino dish, usually consisting of parts of the pig head that would normally be discarded. JC’s sisig is made with chopped up pieces of pig ear, sautéed with lemon, garlic, soy sauce, chilies, and topped with a fried egg and chopped onions. It came out of the kitchen on a sizzling platter, so it had the “oooh” and “aaah” factor normally reserved for fajitas coming out to the table. This sisig was phenomenal. The pig ears were cooked, and more importantly, cut, perfectly to render them chewy, but tender. The chilies added a little heat. The dish is also garnished with a couple of raw chilies if you like your pig ears with more heat. The lemon added the right amount of acidity to this pork-rich dish. The fried egg on top was cooked a little hard for what I would’ve liked. An over easy egg (or better yet, a raw egg) would’ve been perfect with the yolk running throughout the dish. If you’ve never had Filipino food before, this dish is a perfect “gateway” food for you. It’s rich, it’s spicy, it’s acidic, and it’s flavorful. 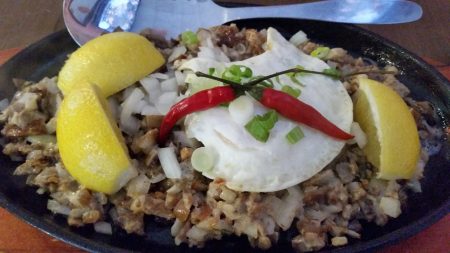 For our main entrées, we ordered Bistek and Kare Kare. In keeping the familial culture of the Philippines, each entrée was served family style, large portions meant to be shared by everyone at the table. Each entrée came with a side of steamed white rice.

Bistek is a dish consisting of sliced beef, cooked with soy sauce, onions, and lemon. The beef was thinly sliced and sautéed. It was a tender and easy to chew piece of meat. The sautéed onions added a slight sweetness, while the soy sauce and lemon added umami and brightness to the dish. Mix the sauce with the rice and it makes a perfect bite. It’s the best beefsteak you’ll eat. 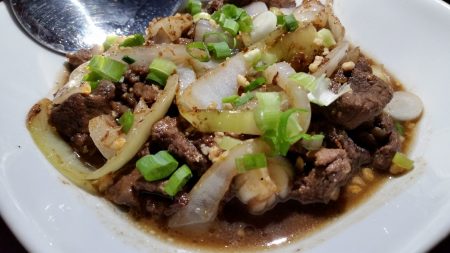 Kare kare can be a bit more intimidating to non-Filipinos trying Filipino food for the first time. It’s made with beef neck bones, green beans, eggplant, and bok choy stewed together in a peanut sauce. JC’s version is wonderfully traditional. It’s a peanut forward dish, but the beef neck bones beefy flavor stands up to it well. The eggplant soaks up the peanut sauce flavor, while the bok choy adds a slight bitterness needed to offset the overall richness of the dish. And of course, the stew tastes even better poured over the steamed white rice. It’s unctuous, smooth, and coats the palate. There’s a little bit of work navigating around the neck bones to get to the meat, but your effort will be rewarded.

I used the word “traditional” multiple times in this review. It was intentional. There was no “modern twist” or “deconstructed version of” or “their take” on Filipino food. JC FIL Cuisine makes traditional Filipino dishes in a traditionally Filipino way. Not only was JC’s food delicious, but most importantly, it reminded me of family. It reminded me of when I moved to Georgia from Michigan as a child and we stayed with my grandparents for a bit until we found a place. It reminded me of many dinners gathered around her table and me constantly pointing to things and asking my grandmother, “What’s that? And that?” and finally being immersed in Filipino culture and learning what it means to be a family. I was born in the states, don’t speak Tagalog, and haven’t been to the Philippines since I was 2-years-old so her cooking was my primary link to my heritage. When I think of Filipino food, I think of her. And eating at JC FIL Cuisine takes me right back to my grandmother’s table.

So for my non-Filipino readers, if you’re looking for “real” Filipino food, you can’t get more real than JC FIL Cuisine and Karaoke. For my Filipino readers, give lola a break from the kitchen, head on down to JC’s, order some home cooked food, and sing a song or two.